The fire is roaring as we sit around the open stove. I hold my cup out and thank my neighbour for the red wine. Even poured from a plastic bottle, this is a treat. Sitting in the warm bothy, the feeling returns to my toes. Gone are the hours ploughing into a stiff headwind through snow showers, forgotten the half-frozen section of bog I traversed to get here.

It’s a Saturday evening in the Highlands of Scotland at the beginning of March. Six of us – five hillwalkers and me – share the bothy. The snow showers clear while we get the fire going and roll out our mattresses for the night.

The landscape is dusted with a fresh lining of white, which sparkles in the beam of my torch while I take a few long exposure shots with my camera. The clouds disappear and give way to a beautiful starlit sky. It's bikepacking at its best. 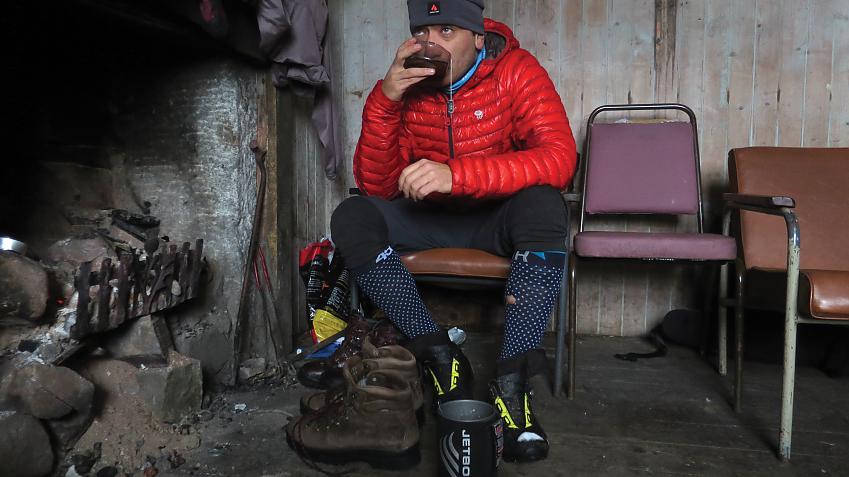 Markus has a warm drink in the bothy

While this was foremost a weekend adventure for me, it was also a scouting trip for a new gravel trail and bikepacking route project in Highland Perthshire. The night before, I had emptied a few drams with adventurer Alastair Humphreys in Dunkeld, talking about micro-adventures and how good the access rights in Scotland are.

It was an inspiring conversation, reminding me what an amazing playground we have on our doorstep in Scotland in any season. Alastair left shortly after 10pm and boarded the sleeper train back to London, while I got out my laptop, opened Komoot and the Heritage Paths website, poured another whisky, and started looking at route options.

The more ambitious plan was to follow NCN 7 towards Dalwhinnie, and then over parts of the East Highland Way and a good estate track to Loch Ossian Youth Hostel. From there I could either take a train or cycle on the Road to the Isles towards Loch Rannoch, and then return on quiet roads to Dunkeld.

The less ambitious and more realistic idea was to join the Central Belter route at Dalnaspidal, stay in the bothy a few kilometres to the west, and then cycle from there to Loch Rannoch and back to Dunkeld.

Just as Alistair would have been pulling in to Euston station, I woke up. It was time to match the inspiring words of the evening before with deeds. It was a sunny but cold March day, with the leaves from last autumn still frozen and dancing in a breeze on the wet tarmac. I cycled out of the small Highland town with its boutique shops. While everything hinted that spring was on its way, the forecast for the next day was for heavy snow and possible major disruptions. 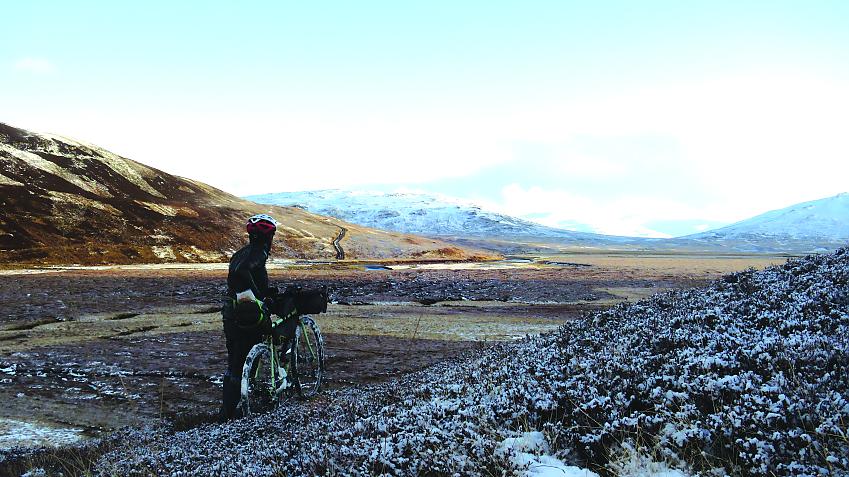 On Meall Doire looking towards the mountains of Craiganour Forest

Fuel for a frozen ride

My Surly Straggler, a rigid steel gravel bike with 39mm tyres, was packed for all possibilities – including unplanned wild camping. A tent is always a sensible backup plan when bikepacking in Scotland, especially in winter. My Nordisk Lofoten weighs in at just under 600g, and it gives me the freedom to stop if I need or want to. My preferred option for this trip was a roof over my head, so that I could enjoy a fresh morning coffee indoors, before wrapping multiple layers of clothes around me to brave the storm the next day.

I parked my bike outside Escape Route Café in Pitlochry, where a tasty menu provided a welcome excuse for a first stop. This is one of my favourite cycling cafés in Scotland: the walls inside are lined with vintage bikes and the café provides great reading material, while the food and coffee are fresh and tasty. Once you make yourself comfortable here, it is hard to leave again. While enjoying my vegetarian breakfast feast, the wind picked up outside and snow showers were moving in. The weather in Scotland can change any time, from sunny skies in the morning to much more serious weather shortly afterwards.

By the time I left Pitlochry, a strong westerly headwind was slowing me down, teaming up with more and more frequent snow showers. The going was tough. It wasn’t made easier digesting the mountain of food in my belly. After another 20 kilometres, I parked my bike outside the Struan Inn. Much quieter than the busy café at the Falls of Bruar nearby, it welcomes cyclists with open arms. Over another coffee, I adjusted my plans for the remainder of the day. 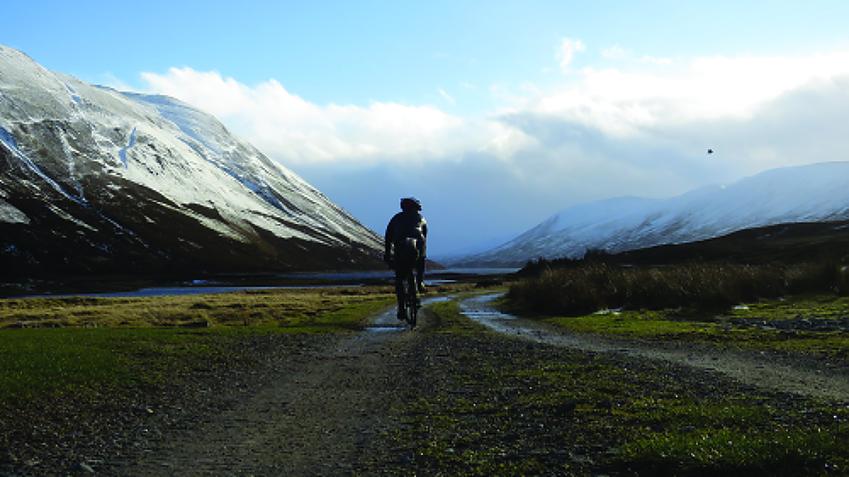 A gravel track between Dalnaspidal and Loch Garry

Tyre tracks in the snow

Going all the way to Loch Ossian Hostel would have meant several hours of riding in the dark and arriving very late. From mapping the Central Belter route about two years ago, I knew the area well, and I decided to leave NCN 7 at Dalnaspidal and continue westbound through a wide-open valley on a well-maintained gravel track along the northern shores of Loch Garry. Shortly after the loch, the track turns into a rough path over boggy ground. The terrain here is challenging and involves several hike-a-bike sections, but provides beautiful views across the mountains in all directions.

As the ground was frozen, it was much easier to traverse this section in winter. To my right, the snow on the peaks of the Cairngorms glowed in the afternoon sun. It is hard to find a spot in Scotland’s remote Highlands that is not picturesque; with a white lining in winter, they look even more beautiful. The short sunny intervals were followed by more snow showers. After another hour, I arrived at the bothy, unpacked my bags and settled for the night.

I woke up to the smell of fresh coffee the next morning, expecting everything to be covered in a thick fresh layer of snow. A band of heavy rain, falling as snow on higher ground, was forecast for the morning and early afternoon. The Met Office had put out a yellow warning, but the snow hadn’t arrived yet. It was still dry and calm when I savoured my porridge.

On the exposed plateau, I could hardly look up, but felt strangely alive ploughing my way to the next valley.

The conditions changed as soon as I got on the bike. I left the bothy in a whiteout. Snow was accumulating quickly on the already icy paths while I battled my way towards Kinloch Rannoch. On the exposed plateau, I could hardly look up, but felt strangely alive ploughing my way to the next valley. A bus stop in Kinloch Rannoch provided a short refuge from the storm and the opportunity to reconsider my plan. I chose to carry on.

The snow got deeper on the Schiehallion Road. The road was completely covered with several inches of the white stuff. Only one car had braved the journey so far. I was struggling to find enough traction with my gravel tyres, but enjoyed the winter wonderland. Everything was white except the sheep on my left, which had blue marks sprayed on their backs.

On the descent, the soft snow quickly turned into slush and rain – my least favourite conditions for riding a bike. Now it was wet and just above freezing. Close to Dull, I needed a break from the grim riding and new motivation to keep going. While the name of the village suggests otherwise, the café at Highland Safaris was warm, welcoming and far away from ‘dull’. The breakfast was better than that of the day before. Warmed and refuelled, I was ready to head out for the next part of my ride with a smile.

I was back in driving rain but only lasted another four kilometres in it. The Watermill, another great café and bookshop in Aberfeldy provided more motivational coffee and shelter from the miserable weather. The front eventually passed, and the sun accompanied me on the last part of my adventure. With the help of my GPS and signposts, I found an off-road trail connecting Aberfeldy and Dunkeld, climbing through a forest on a well graded track to Loch Kennard.

As on the Shiehallion Road, I was the only person here, making fresh tracks in the snow as I climbed towards the top. Shortly afterwards, I reached the Griffin Wind Farm, with more great gravel tracks leading through the site towards Dunkeld.

The further I descended, the more the snow was replaced by mud. On the last few kilometres, I passed through The Hermitage, a beautiful stretch of forest close to Dunkeld, home to excellent forest trails. Cruising through giant Douglas firs, which are among the tallest trees in Britain, nothing here reminded me of the wintry conditions I had experienced just a few hours ago. My bike was completely covered in mud, and ready for a proper wash when I arrived in Dunkeld. So was I.

The shower for me and my bike had to wait for another few hours. Before boarding the train back to Edinburgh, I stopped in a pub where an open fire was roaring. I ordered a pint and a burger, walked back to a table and sunk onto the wooden chair in my muddy gear. I was tired but happy. The same warmth that filled the room filled my memories – memories of a beautiful yet challenging winter adventure on the paths less travelled in Scotland.

Conditions: Scotland's weather can be tough in any season, but especially winter. This route's hike-a-bike section is best in winter, however, as the boggy ground is frozen.

Accommodation: Dunkeld has plenty. Accommodation along the middle section of the route is sparse, but the bothy provides basic sleeping platforms and a fireplace.

Maps/guides: Komoot for planning and navigation on the phone, plus a Garmin eTrex 20x for the bike. OS Landrangers 42 & 52 cover the ride. I’m glad I had… A proper sleeping bag and mat for the bothy, waterproof winter cycling boots, and a GPS with joystick, which I was able to use with thick gloves.

Next time I would… Spend a night in Dunkeld afterwards and not rush to get the train to Edinburgh.

Dunkeld is accessible by train on the Perth to Inverness line, with frequent connections.

Booking in advance is advised, as bikes travel for free but need to be reserved.

This route is a great side trip when cycling on NCN 7 from Glasgow to Inverness or vice versa.

A network of gravel day-trips and a bikepacking route are currently under development in Dunkeld. More details can be found at perthshiregravel.com.

Bikepacking in Scotland in winter can be hard work, but also provides for amazing experiences.

Bothies are simple shelters that are free to use and open to all, apart from large groups (over six people). As well as giving refuge in some of the most remote areas of the country, and providing emergency shelter (as for Markus), they are full of character. They may get busy and you might find there is no room for you to sleep, so take a tarp or a tent just incase.

All are very basic – four walls and a roof – but most have a fireplace or stove that you can use for warmth, although you’ll need to carry your own fuel and bring candles.

Some bothies have electricity and a toilet. In most, candles and a spade stand in place of these luxuries.

For overnighting in bothies, pack an insulated sleeping mattress, a sub-zero sleeping bag, and a stove for cooking.

Read the Bothy Code and find a map at mountainbothies.org.uk

Cycling in the Scottish Highlands View