The Dorset Gravel Dash is an event you don't want to miss out on!
By Sam Jones
Sunday, 9 December 2018

The Dorset Gravel Dash is a 100-mile organised off-road ride through West Country hills, with camping and feasting. Sam Jones signed up.

At 9am on a May morning, the beer garden of the Red Lion in Swanage​ was packed with a 100 or so bikepackers, and event organiser Charlie the Bikemonger was quoting William Shatner. "Live life… live life like you’re gonna die, ’cos you’re gonna," he boomed. "I hate to be the bearer of bad news… but you’re gonna die."

There was a cheer from the cyclists. Charlie’s words were part eulogy for veteran Gravel Dasher Oli Kemp, who had died recently in a car crash, and part encouragement for all of us to make the most of the next two days. The big group of strangers was indeed already bonding.

So began the Surly Dorset Gravel Dash, the most hospitable and enjoyable organised ride I’ve been on – not to mention one of the most challenging.

The 2018 edition was the fifth Dorset Gravel Dash. The brainchild of bike shop owner Charlie Hobbs, the aforementioned Bikemonger, it’s an off-road ride of just under 100 miles with 6,876ft of climbing. While you’ll need to be fit and determined to conquer every climb in Hardy Country, the emphasis is not on how hard you cycle but on how much fun you have. It’s not a race. Charlie describes it as "scouting for adults". 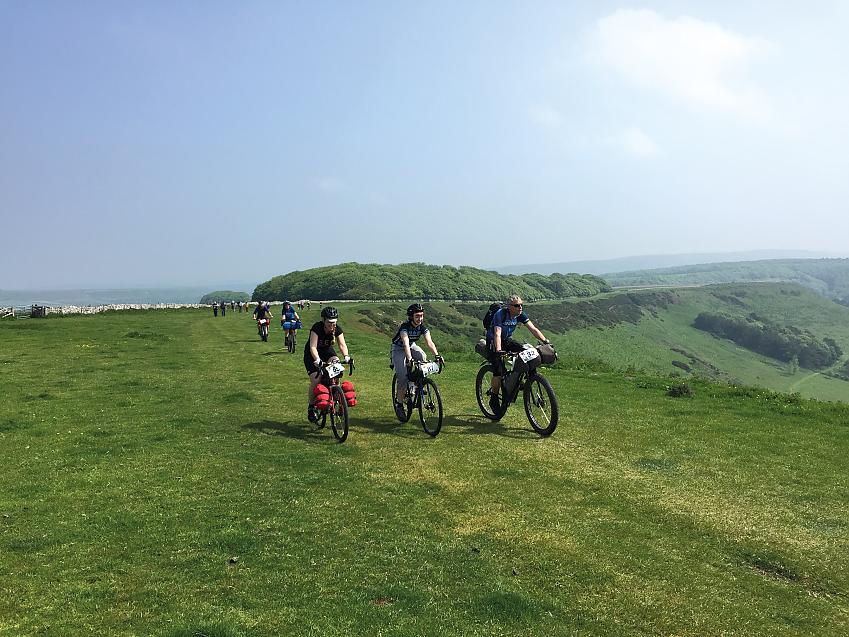 The route encourages you to take your time and appreciate the differing landscapes you encounter, from Corfe​ Castle near the start, to the Jurassic Coast in the south, to the Iron Age hill forts in the north. Despite growing up in Dorset, and spending much of my time walking its trails, I was surprised to discover new gems as well as pleased to return to old favourites.

That’s down to the hard work of Charlie and his team, who have carefully plotted a route using existing rights of way and quiet roads, and then negotiated access with landowners where necessary. It’s clear they know the area well, and there’s a visible effort to give back to the local community.

Local suppliers are used and efforts to minimise conflict with locals and landowners are high – not just in the route directions but in the rider instructions. Ten miles from the finish, a group of us encountered a dog walker who held the gate open for us all to pass through. Yes, he knew about Charlie and the Dorset Gravel Dash, he said. If only all mass participation events could inspire similar local sentiment!

There are two ways to tackle the Dash: in one day, with a mighty hoof of an effort; or over two, which means carrying camping gear for an overnight stay. Together with colleagues Ian Taylor, Julie Rand, and her husband Roland, I’d plumped for the twoday​ version, known as the 50:50. The prospect of combining a weekend’s worth of riding with, as Charlie puts it, "sitting around a fire, drinking beer, eating goat" was too good to miss.

Combining a weekend’s worth of riding with ‘sitting around a fire, drinking beer, eating goat’ was too good to miss. 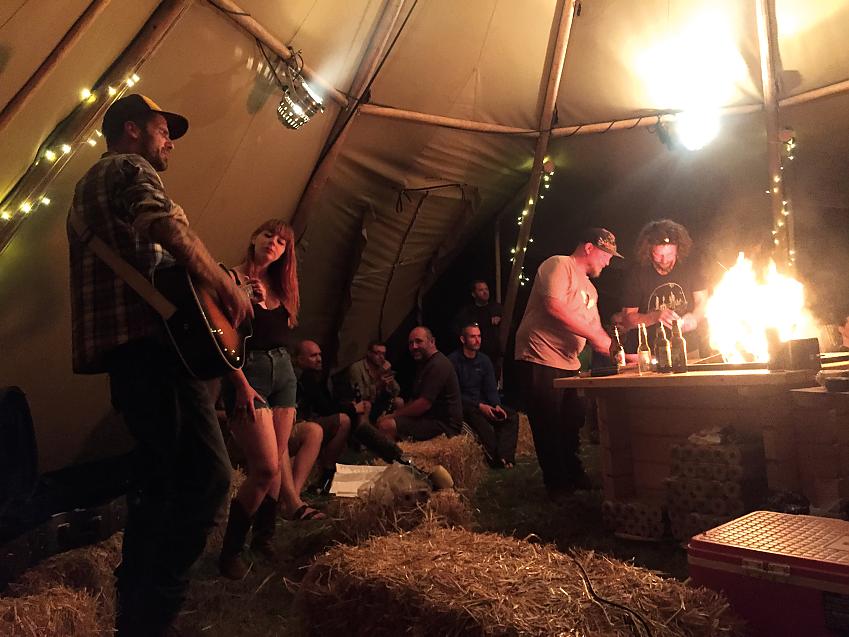 Live music, beer, barbecue and a world cheese competition - what more could you want?

The previous evening, we’d been joined by two more Cycling UK members: journalist Laura Laker and framebuilder Caren Hartley of Hartley Cycles. So a group of six of us snaked out from the Red Lion on a misty May morning. Being the local lad, I somehow found myself "routemaster" – and promptly followed a group of people going the wrong way.

Back on track, we were soon heading up and out of Swanage along the road to​ Ulwell, where I found myself chatting in broken English and Italian with Paulo from Venice, who’d ventured over with a group of Italian friends. Immaculately groomed and attired in Rapha, Paulo and pals appeared to be relishing the easygoing nature of the ride, an attitude unusual in his home country. Yet when we hit the first chalky climb up to the Purbeck Way, he was gone.

There was an eclectic mix of bikes on the Gravel Dash. Our group comprised two gravel bikes, a steel tourer, Caren’s beautiful handbuilt bike that was somewhere between a tourer and a gravel bike, and two 29+ mountain bikes – one of them a singlespeed (not mine, thankfully!). Gravel bikes were popular, as you might expect, as were the whole family of mountain bikes from traditional 26-inch hardtails to full-suspension fat bikes. Each had pros and cons, but I was glad to have my Surly ECR. The large tyres’ grip and the bike’s wide gear range saw me up most hills, and the 29+ tyres and flat handlebar made the tricky descents more manageable and enjoyable.

Watching gravel bike riders grimly fixed to the drops on steep descents or bounced around on the hard earth tracks made me grateful – even if I did have to work harder on the road. Having said that, Ian frequently led the way on road and off on his Spa Cycles tourer. He’d prepared by exchanging slicks for knobbly tyres and removing his mudguards. While his drops and V-brakes meant walking down the steepest descents, there was little practical difference between his tourer and most of the gravel bikes. 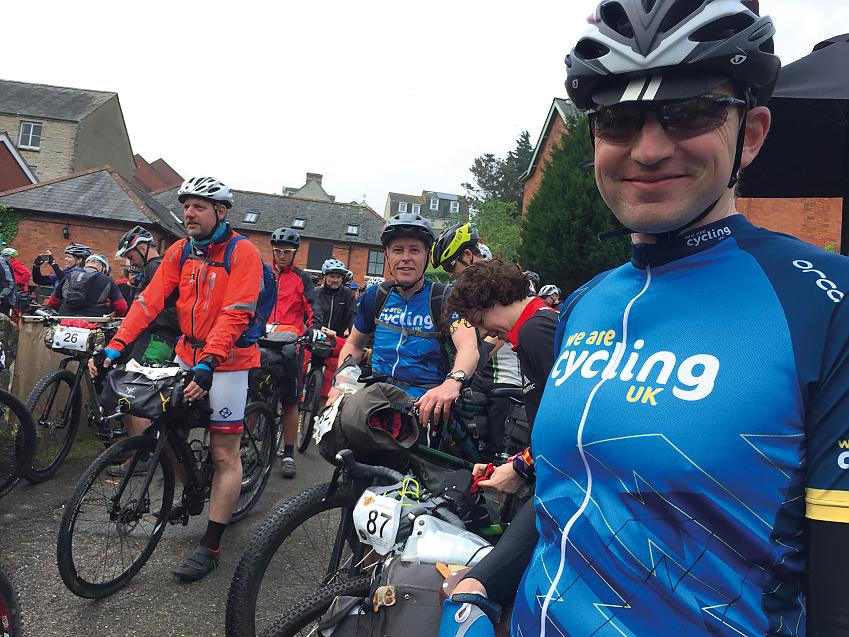 As we reached the top of the first big hill, the mist lifted. Through the haze of what promised to be a scorcher of a day, Corfe​ Castle, the battle-scarred survivor of the Civil War that guarded the entrance to the Purbecks, emerged below us at the bottom of a chalky bridleway.

The sun stayed with us for the rest of the day, making suntan lotion a must and water scarce at the refreshment stops. All that sun may have got to me. When we came to Swyre Head, which looks down over Kimmeridge and out to sea, I attempted to ride up its steep slope rather than the take the steps. I somersaulted backwards, bike and all, to where I began – much to the amusement of my companions.

The problem with the Jurassic Coast, scenic and well deserving of its UNESCO status though it is, is that its ups and downs are relentless when you’re on two wheels. So it was with some relief that we headed inland from Lulworth, swapping high hills and open pasture for woodland and shelter from the sun – including a pleasant splash through the ford at Moreton, the village where TE Lawrence is buried.

The alternative options for crossing the ford at Moreton. Photo Sarah Hobbs

With 10 miles to go of the first day’s leg, Caren and Laura parted ways from us, seeking a less bumpy route to the campsite in Shillingstone to help alleviate the pain Caren was experiencing in her shoulder. Consequently they missed the mechanicals that then beset us: Roland suffered a string of punctures, and I wedged my chain into my cassette and bent a cog in such a way as to effectively kill off my climbing gears.

We arrived at the campsite with thunder chasing us off the high hills.

We arrived at the campsite with thunder chasing us off the high hills, and soon found Laura and Caren with their tents pitched. We put ours up, then we feasted. The food was excellent; Joel from the Wild Isle Kitchen spends several days foraging for wild food, preparing it, and building fire pits ahead of the Saturday evening festivities. It’s no surprise that the 50:50 is twice as popular as the one-day event. 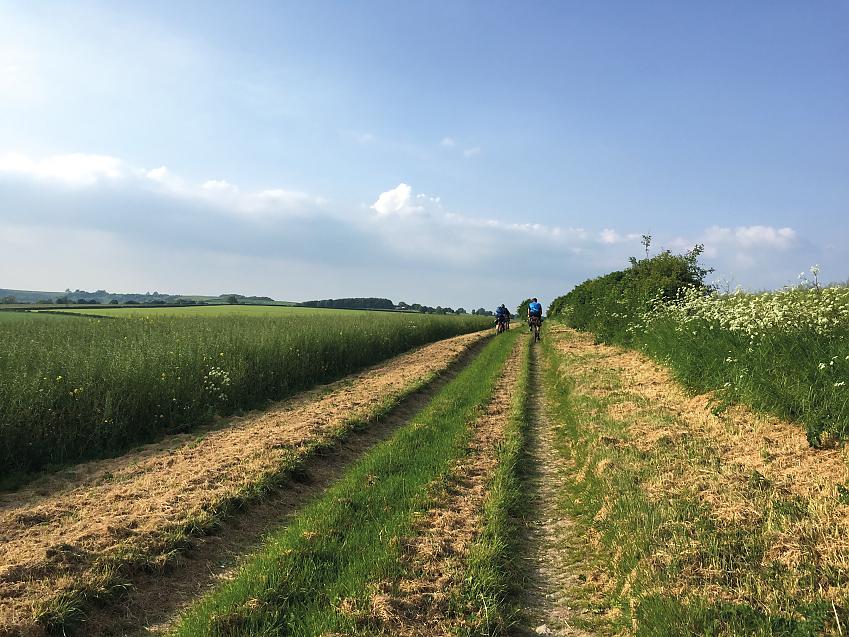 Blue skies gave way to thundery clouds in the evening.

While the revelries continued and lightning danced in the sky, I was soon asleep. I woke refreshed and had a hearty breakfast, fuelling myself for the climbs up North Dorset’s Iron Age hill forts at Hambledon​ Hill and Hodd Hill. When I lived in Dorset, I would occasionally walk here, marvelling at the work that had gone into the forts, and wondering what could induce anyone to run up their slopes into a hail of projectiles.

Our group of six grew to eight on Hambledon Hill as we adopted Rick and Olly​ from Sussex. Rick had plunged into a gorse bush the previous day, requiring several people to pull him out and then a pair of tweezers to remove (most of) the embedded gorse. Despite this, he was in surprisingly good spirits and kept with us all the way to the end. 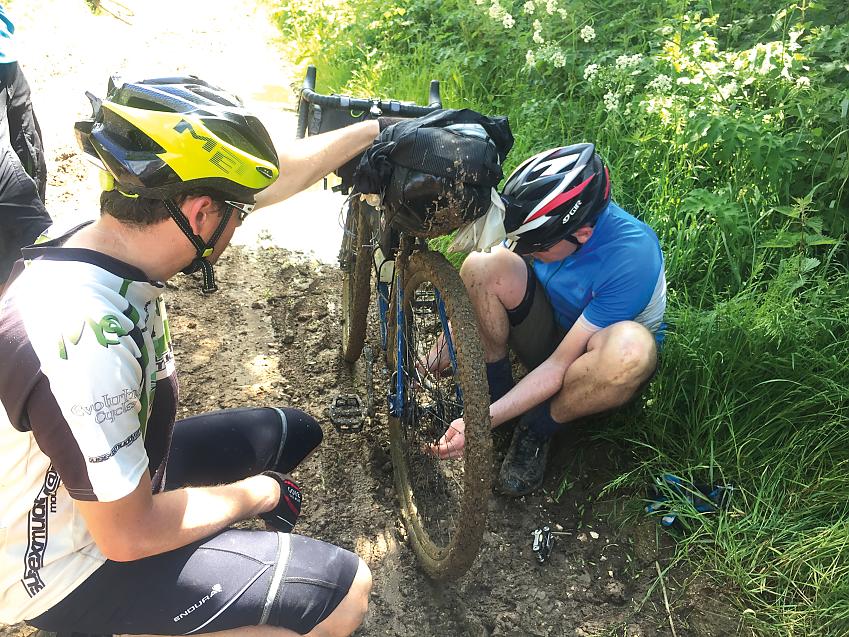 Overnight it had rained heavily, turning the dust into thick mud. It was difficult to ride through and it put an end to Laura’s rear derailleur. Fortunately, a frame builder, a trained cycle mechanic, and several enthusiasts were on hand to help. She was soon pedalling again, albeit on a makeshift singlespeed.

Episodes like this didn’t detract from the festival atmosphere of the ride. I suspect that’s the magic of Gravel Dash: it’s not just the landscape and the route, but the people it attracts. It’s the teams of volunteers manning the water stations who make you want to stay and chat, the new friends you pick up along the way, and the old ones too.

As we rolled into the Red Lion’s car park, tired but jubilant, we were greeted by other cheering Dashers. Charlie said he couldn’t believe no one hated him after all the hills he’d thrown in. Even with promises of more hill forts for next year, it’s hard to imagine anyone having a bad time on the Gravel Dash. I’ll definitely be signing up for next year’s event. 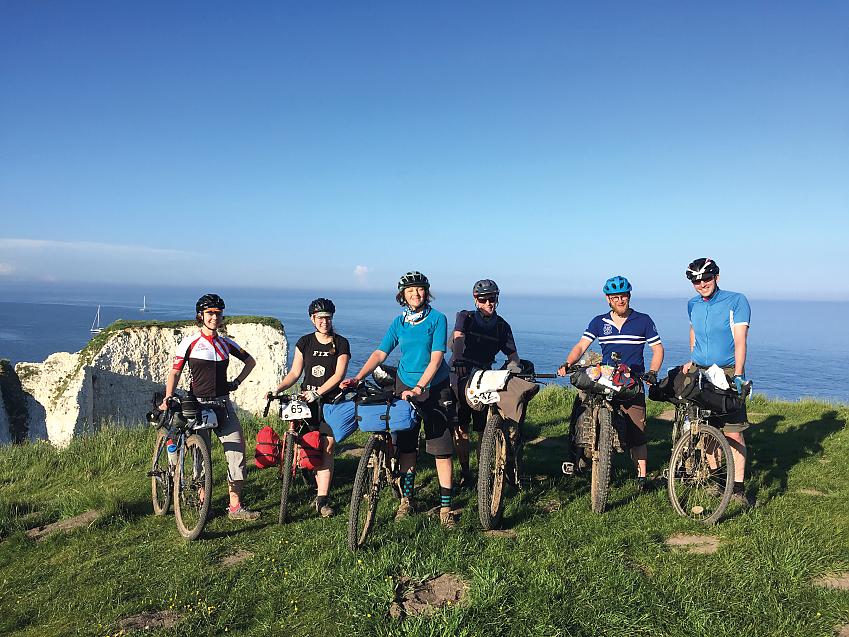 Cycling UK and friends at the top of Old Harry Rocks 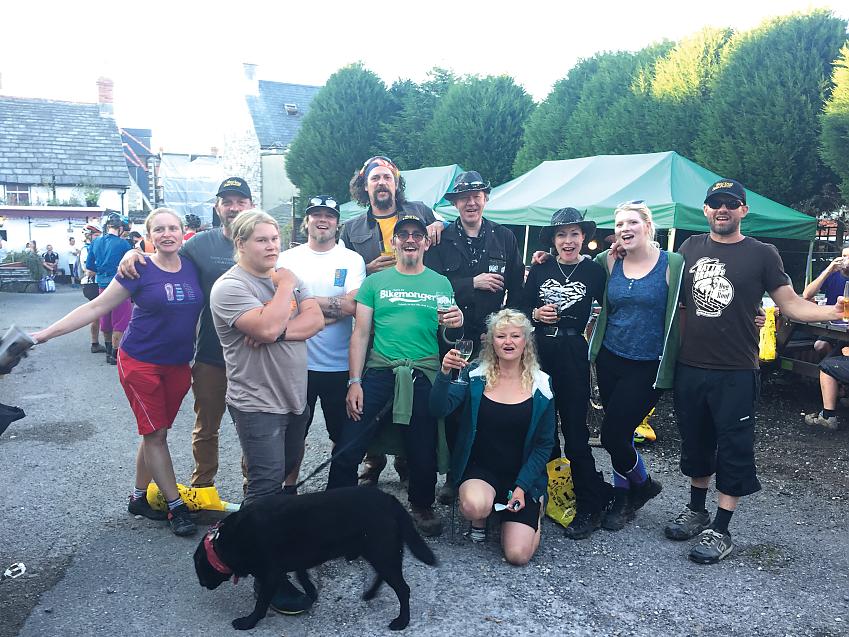 Charlie and his team at the Red Lion
Entry fee: £79.99 for the 50:50, £39.99 for the 100.
Distance: 97 miles, split into 57 miles and 40 miles on the 50:50.
Route: Circular route clockwise from Swanage. Day 1 was top-loaded with climbing – through the Purbecks to Lulworth, then north towards​ Shillingstone. Day 2 began with steep climbs and descents over the Iron Age hill forts on Hambeldon and​ Hodd Hills, followed by a flat run from​ Blandford to  Wareham. It ended with a climb to Old Harry Rocks and a dicy descent to Swanage for beer and medals at the Red Lion.
Conditions: Thunder, lightning, and rain in the evenings made for clear, hot, sunny days across the weekend. We rode on bridleways, quiet roads, and negotiated rights of way.
Accommodation: Camping – it’s a bikepacking adventure. I shared a lightweight tent with Ian.
Bikes used: I rode a Surly ECR, Julie a Bombtrack Beyond 1, Roland a singlespeed Surly Krampus, and Ian a Spa Cycles Steel Tourer.
Maps/guides: Garmin Tour Edge with route supplied by organiser. OS Explorer maps 194 and 195 .
I'm glad I had… Sun lotion, 29+ tyres, Ortlieb Seat-Pack M, companions.
Next time I would...Hopefully not break my climbing gears!
Website: www.charliethebikemonger.com

Gravel riding: do it yourself 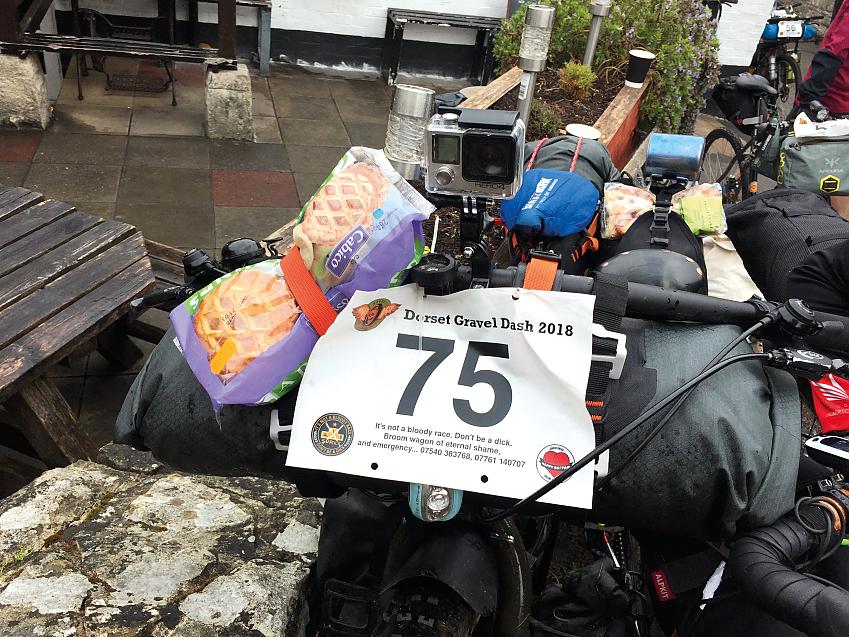