Kilimanjaro dominates the horizon from miles away
By Lucy Goldsmith
Wednesday, 25 November 2020

Africa’s tallest mountain stands on the border between Kenya and Tanzania. Lucy Goldsmith cycled there from Nairobi with two companions

Warm air fragrant with the scents of outdoor cooking filled my nostrils as I stepped off the ’plane at Jomo Kenyatta airport, transporting me back more than a decade to when I lived on the opposite side of Africa in Ghana. Outside the airport a crowd bustled. With my bags and bike box, I looked sceptically at the taxi driver’s tiny three-door hatchback. A game of Tetris later we were on our way, heads bowed under the bike box wedged against the roof. 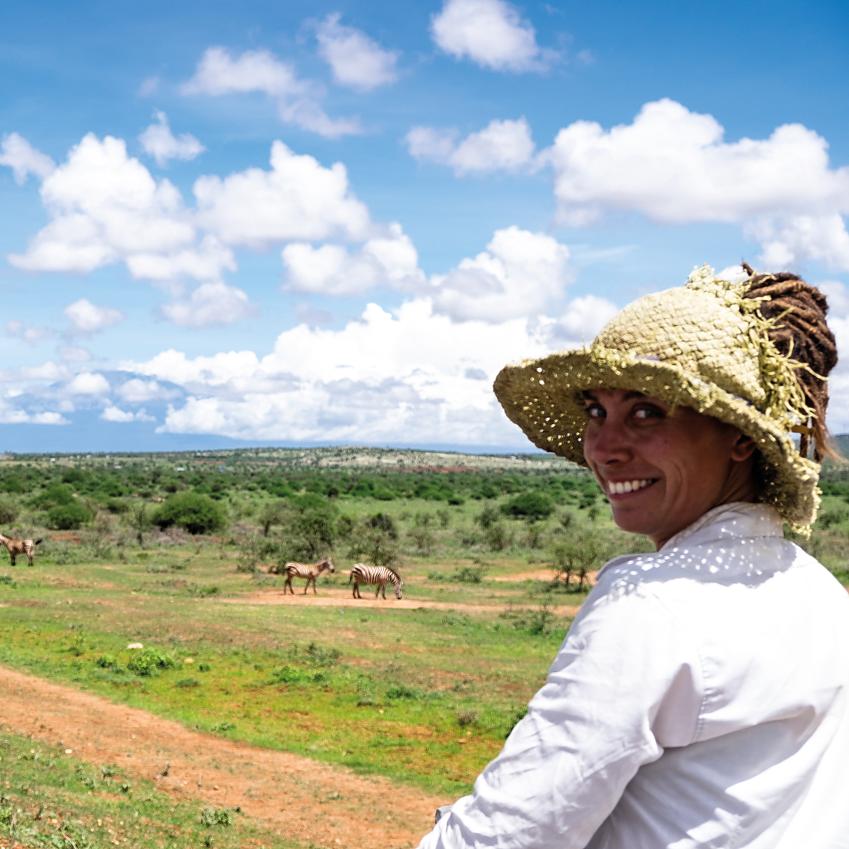 I was meeting two fellow tourers, Jude and Astrid, who were cycling a round-about way home to Melbourne from London. When my cycle touring honeymoon around Europe came to an unfortunate and premature end, they kindly invited me to join them. We’d met twice – at the Cycle Touring Festival and when our paths crossed in Denmark.

We would be heading towards Mount Kilimanjaro, roughly the halfway mark on their route from Cairo to Cape Town. But first we spent a week in Nairobi. My companions were in need of a well earned rest and I was glad of the chance to relax and acclimatise.

Our first day of riding was short but challenging, negotiating heavy urban traffic and hilly terrain to reach Nairobi’s southwestern periphery. There we were hosted by two inspiring young Kenyan women, both working on personal projects to bring about positive change and awareness-raising of local issues around human rights and the environment. We shared stories late into the night. 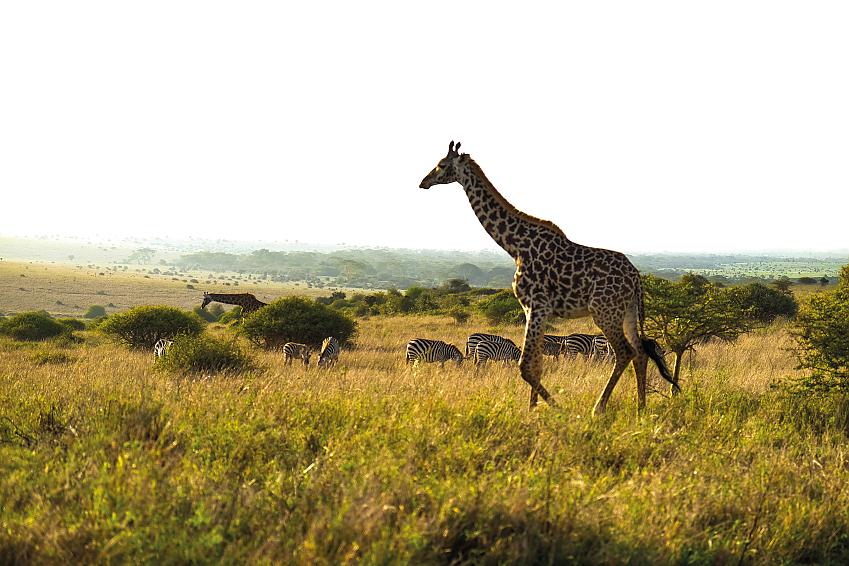 From there our route took us along a mixture of rutted and undulating dirt tracks and impressively smooth tarmac. Delicious meals of chapatis, rice, beans and greens from roadside eateries kept us fuelled. We passed huge sisal plantations and schools where the children would come running to call and wave to us. Stretches of banana tree-laden greenery reached as far as the eye could see, and porcupine-like trees with huge, tough thorns threatened to puncture our tyres. As the kilometres and the days rolled on, we wondered when we would get our first glimpse of Mount Kilimanjaro.

Each night we pitched our tents in the wild, finding secluded spots in the bush, where we cooked camp-stove curries and listened to the distant call of hyenas. Nights under canvas felt peaceful and comforting, connecting us further to our surroundings. Local people would ask if we were not afraid, perhaps because we were camping, perhaps because we were three women. Travelling with such a calm, practical and good-humoured couple, I never doubted that I was in safe hands. 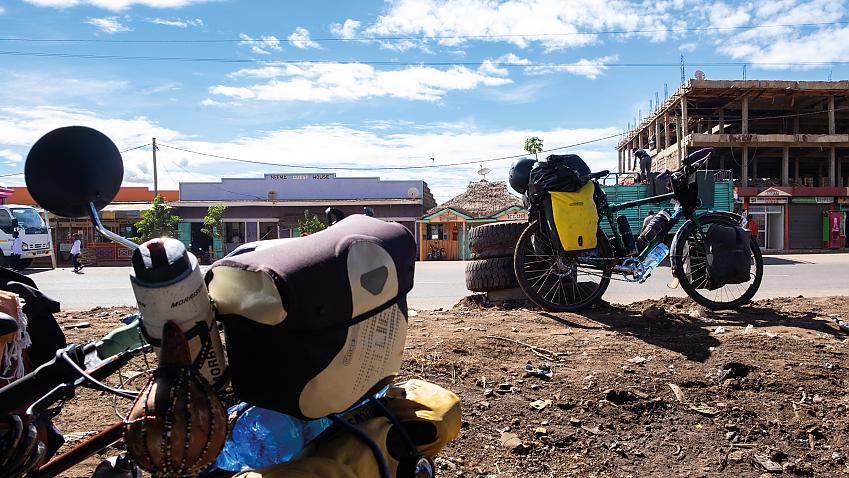 As we pedalled south, we looked forward to catching a glimpse of Kilimanjaro. With the landscape predominantly flat, we would be able to see if from a long way off. For Jude and Astrid, the mountain’s distinctive profile on the skyline was something they’d been anticipating for more than 5,000km, ever since setting off from Egypt four months earlier.

Each day a headwind picked up around 11am. For me it was a struggle. I would often slipstream one of the others, their legs seemingly bionic. At times we rode a distance apart and I would switch off, taking in the surroundings, plugged into a Swahili podcast that we were all using for language acquisition. As we rode through villages – clusters of rustic wooden shacks clad with corrugated iron roofs, and past groups of farm labourers – we would respond to greetings of “Habari gani?” (“How are you?”) with “Nzuri” (“Good”).

One evening, after a long day on the road, we pulled off into lush, dense bush, its vibrant green almost luminous under an overcast sky. We came across a Masai family who warned us of elephants and invited us to camp on their farm. Three generations gathered as we set up for the night, peering with interest into our tents, fascinated by our stove. The following morning we were given a tour of their home, a collection of hand-built cob houses. The grandmother and matriarch of the family, clad in traditional dress with a multitude of colourful beads around her neck, stood with her grandchildren at her feet. 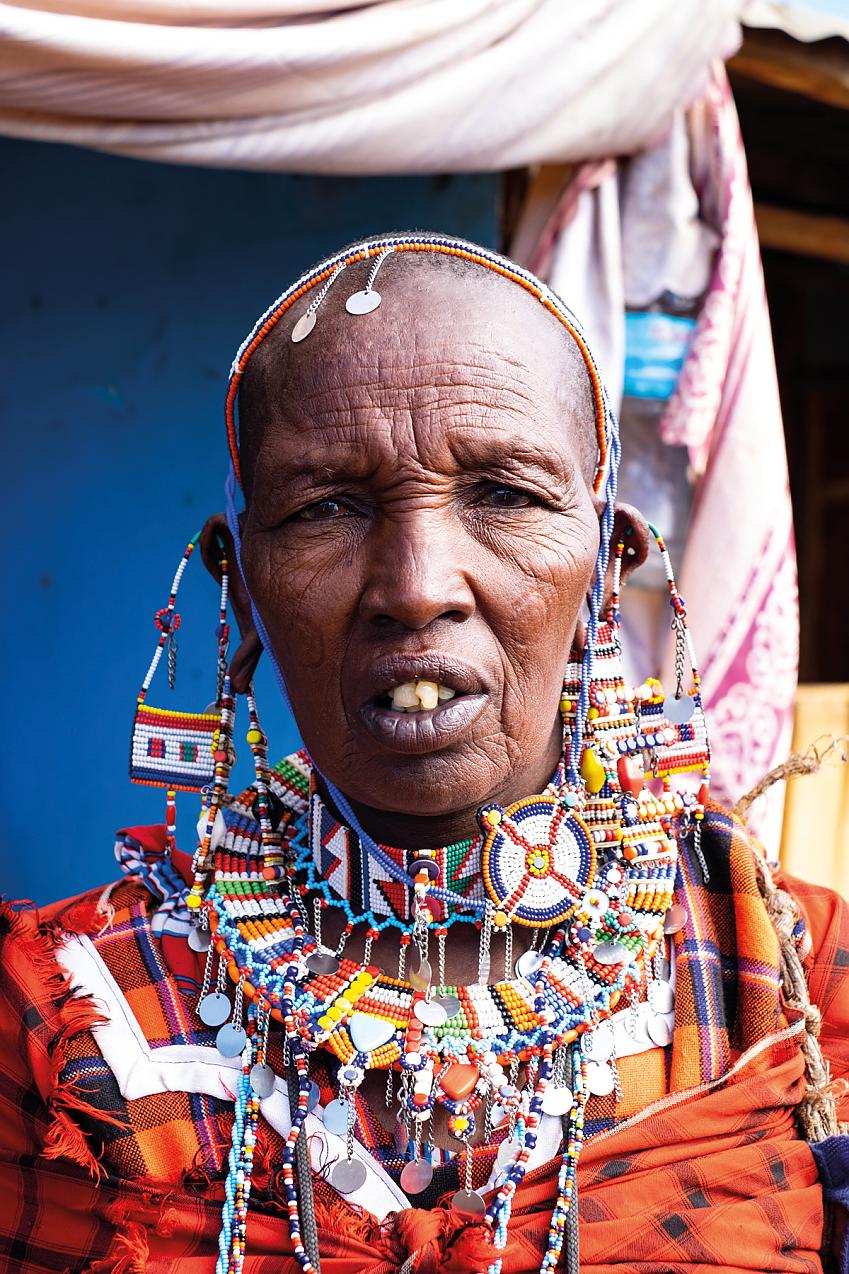 Before departing, our bottles were filled with water that had fallen on Kilimanjaro. Minutes after setting off for the day, the mountain finally rose into view, its vast, unmistakable profile an anomaly in the otherwise level horizon. Uhuru Peak, on the snow-capped summit of the tallest free-standing mountain on Earth, beckoned us onward.

Our final two days in Kenya were dominated by the presence of Kilimanjaro, remaining always in our sights and marking the border with Tanzania. Grazing on the Savannah in the foreground were gazelles, zebra and giraffes – an iconic and captivating scene. With one day of riding remaining to reach the border, we sipped cold beers at our rooftop camp, the terrace of a bar our campsite for the night. We watched the sun set, Kilimanjaro’s profile a soft shade of pink, gradually darkening through purple hues until it was silhouetted. 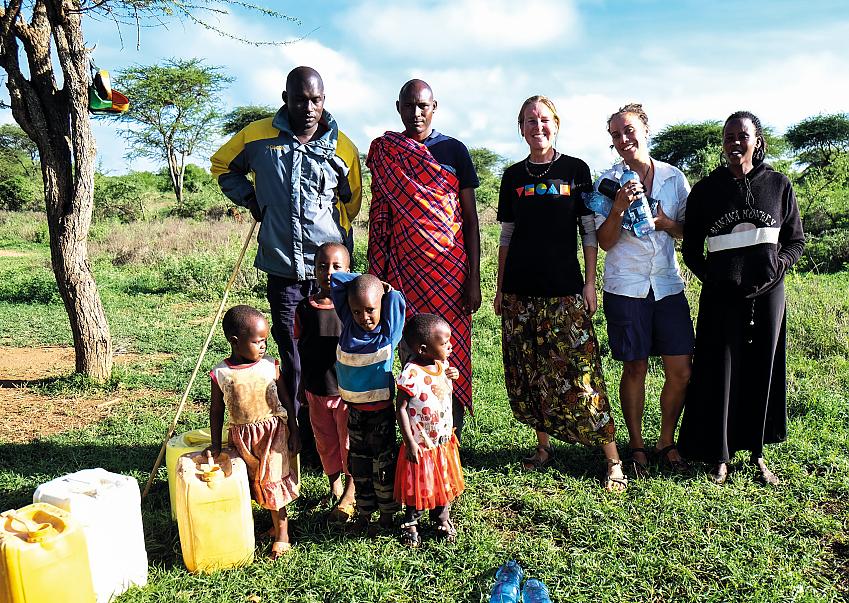 Astrid with a Masai family

Twenty-four hours later, after a final day of riding in Kenya, ebola screenings, bureaucratic debacle, and obtaining visas, we made it across the border. That night, in a guest house in Tanzania, I peeled back my mosquito net and climbed into bed. A feeling of awe flowed through me, having reached one of the world’s great wonders, motivated by the strength, ambition and integrity of my cycle touring companions and hosts, all women whom I feel honoured to call my friends.

Do it yourself: Kenyan touring

This trip should take about a week at a reasonably leisurely pace. Wide tyres are recommended to cope with the rougher dirt roads en route. Wild camping through Kenya was fairly easy, and we would fill our water bottles in ‘hotels’ (the roadside restaurants where we stopped for lunch). This trip could be combined with a trek to Uhuru Peak; there is an airport near Kilimanjaro.

Conditions: End of the rainy season so some heavy showers. Temperatures around 20ºC. Afternoon headwinds. Roads varied from dirt to smooth tarmac.

Next time I would: Climb Kilimanjaro!

How to start a cycling group for women View