Twenty-four miles of deserted trail, bathed in sunshine, lay in front of us. I was on the Dava Way with my son, Jeremy, at the start of a three-day bikepacking trip. As Scotland came out of lockdown, our plans had been hastily thrown together. Inspiration had been lacking when there was no hope of getting out. Then vague ideas came into sharp focus, tickets were booked, and we were committed.

I’d never heard of the Dava Way until something caught my eye when scanning the map. And what a discovery it was! Over 20 miles of traffic-free trail across remote landscape, all at a steady gradient as it follows the old Highland Railway. Opened in 2005 after eight years of fundraising and negotiations by the Dava Way Association, it links Forres on the north east coast with Grantown-on-Spey.

Tomintoul, the highest village in the Highlands, was our destination for day one. But at eight in the evening we were staring at an expanse of heather and bog in Glen Brown with no hint of a path. A quick check of the GPS confirmed we were en route; there was just no visible sign of it. Perseverance pays off: the trail reappeared and so, eventually, did the tarmac up to Tomintoul. 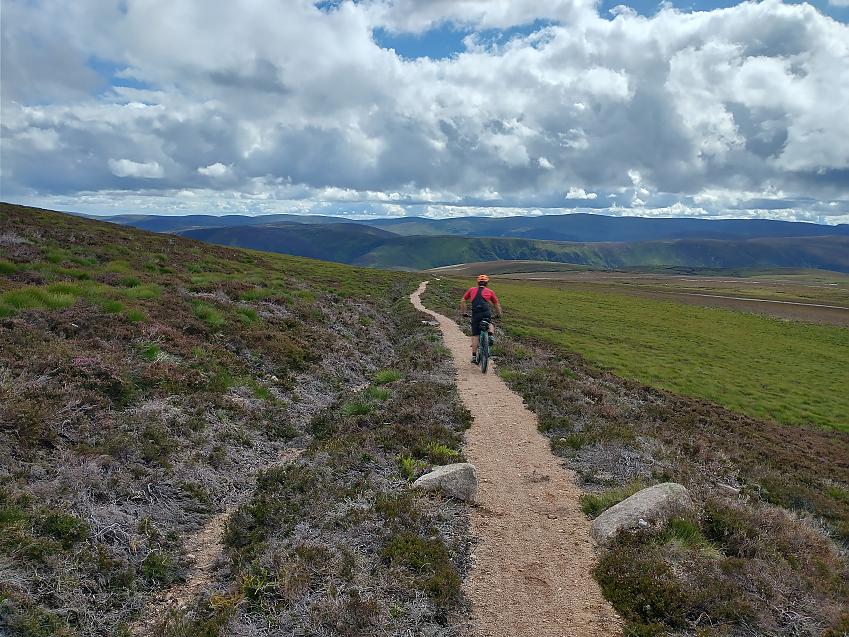 Jeremy on The Mounth Road

A touch of royalty was the target for the second day – Ballater, in Deeside. But first we had to follow the Avon upstream, climb the shoulder of Culardoch (900m), and then descend to Invercauld before being rewarded with anything resembling a road. We rode for over four hours without seeing a soul.

Our third day was the toughest – over 80km and 1,200m of ascent – to reach Montrose. But we had no choice if we wanted to get home; we’d left our car there. Things did not bode well. Something I had eaten had disagreed with me overnight and I was feeling a little delicate.

Undeterred, we bought lunch supplies from the deli in the solid granite village of Ballater and headed off towards Glen Tanar. Royal Deeside was showing its good side today, bathed in sunshine. I made a mental note to return. There is so much good cycling on offer.

Glen Tanar, a tributary, is equally beautiful and offers good, easy riding on quiet roads and tracks. Easy that is, until the route leaves the valley and climbs towards Mount Keen (939m), the most easterly Munro.

As we gained height the views became amazing for miles around. The gradient eased and we were riding on a beautiful trail, recently repaired courtesy of Cairngorm National Park Authority

We were following the Mounth Road, which strikes fear into the hardiest of rough-stuff cyclists. I use the word ‘road’ advisedly. This is a long and steep drove ‘road’ over a mountain pass.

“We can ride this, Dad”, Jeremy called to me. I was already off my bike and pushing.

As we gained height the views became amazing for miles around. The gradient eased and we were riding on a beautiful trail, recently repaired courtesy of Cairngorm National Park Authority. Even the granite-edged drainage channels – the bane of mountain bikers – had thoughtful flagstone bypasses. The option to go to the summit of Mount Keen presented itself.

“You going for it, Dad?” Jeremy asked. He knew my answer before I said it.

“We’ve still got 40 miles to cover. No chance!” So started the highlight of our trip: the descent along a lovely ribbon of granite-surfaced path, disappearing into the distance. All was going well until, in the distance, I saw Jeremy’s bike swerving, dust rising. He had stopped and was waving to me to slow down. He’d hit a stone channel – no bypass for this one – clearing it with his front wheel but not the rear.

The tubeless tyre had done its job. Onward and downward into Glen Mark and Queen’s Well.

We stopped by a stream to rest and top up water bottles. I lay back in the heather, basking in the sunshine and the sense of achievement that our challenge was nearly in the bag.

We tried pumping to no avail. Out came a spare tube. We struggled to refit the tight-fitting tyre over the tubeless-ready rim. To my disgust, we nipped the innertube. The implications started to sink in: 30 miles still to do, no villages, never mind bike shops. Jeremy started walking…

We reached the road with a vague plan that I would ride to our digs at Montrose, then drive back to pick him up. I looked over my shoulder to see a car had stopped, boot open, and Jeremy was already putting his bike in the back. Two guys were driving back after a walk and had seen Jeremy’s predicament.

“They live in Brechin, just eight miles from Montrose,” Jeremy said. I agreed to ride on and come out to collect him.

I had an incident-free ride down a deserted Glen Mark. Then, all of a sudden, the landscape changed from mountain to pastoral as I crossed the Highland Boundary Fault Line. The last few miles dragged but eventually I saw the tidal water of Montrose Basin reflecting in the sunlight ahead.

I knocked heavily on the door of our guest house to be greeted by Ailsa, the landlady.

“Who is?” I wondered as I walked in – to be greeted by Jeremy enjoying tea and cake. 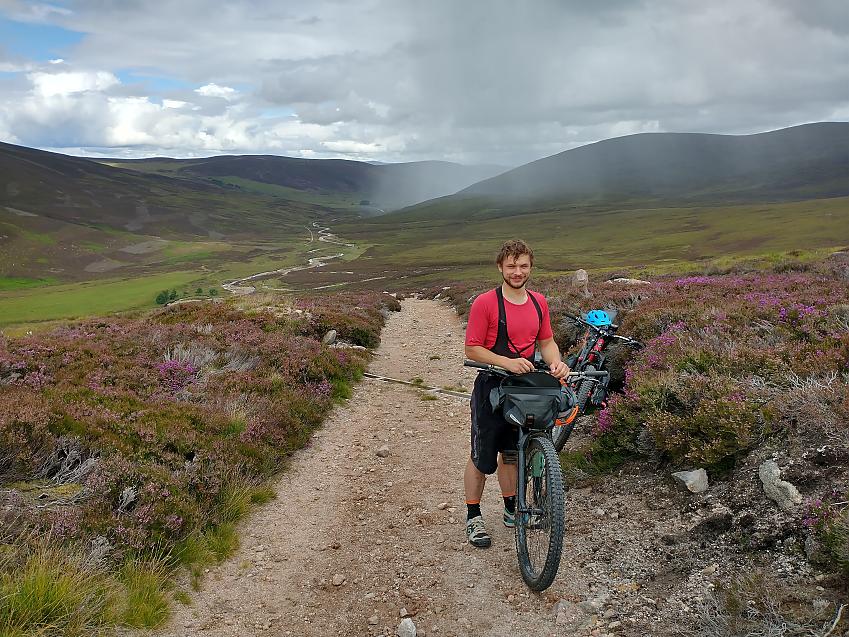 Jeremy taking a break on the shoulders of Mt Keen

Do it yourself : Bikepacking

We opted for B&Bs over camping so we could travel light – and enjoy a bit of comfort.

Route planning:  Be realistic. Once off tarmac your speed drops and so do distances. We averaged about 70km per day.

Luggage: Avoid using a rack with big panniers, which make a bike unwieldy and stress the rigid attachments to the rack. Seatpacks, frame bags, and fork bags are better.

Navigation: Plot your route on a GPS with OS mapping to minimise errors. I always carry the paper map as well.

Route: Started and finished at a guest house in Montrose, taking the train to Forres and cycling back over three days. Forres to Tomintoul via the Dava Way and Glen Brown. Tomintoul to Ballater via Glens Avon and Builg. Ballater to Montrose via Glen Tanar, the Mounth Road, and Glen Mark.

I’m glad I had…Ordnance Survey map app on my phone (in addition to my GPS) for UK-wide 1:25,000 mapping and position. Very useful when the trail disappears!

Next time I would…Make sure we had fresh tyre sealant in our tubeless tyres.