The virtues of a really low bottom gear ratio have long been appreciated by touring cyclists in particular, and cyclists wanting an easier or more enjoyable life in general. A suitably small bottom gear can make the difference between cycling up a hill and having to get off and push, or between relative freshness and complete exhaustion at the end of a long, hilly ride.

Even performance-orientated road bike groupsets have seen their lowest-available gear ratios shrink markedly over the last decade or so as manufacturers grasp the idea that many people would prefer to be able to ride up hills with relative ease, irrespective of it taking a bit more time. Laden tourists and the less fit actively need to be able to do so.

Exactly what counts as low gearing depends on the rider’s personal circumstances and requirements, but a good indicator is that it should feel too low at the start of a ride, even on the steepest gradient likely to be encountered.

For many cyclists, this may simply mean the sort of gearing currently available on a standard mid-range road bike groupset, which is to say a 1:1 ratio between the smallest front chainring and largest rear sprocket on a 700C wheel, or about 27". Here, however, we are talking about going even lower – and how to get there. 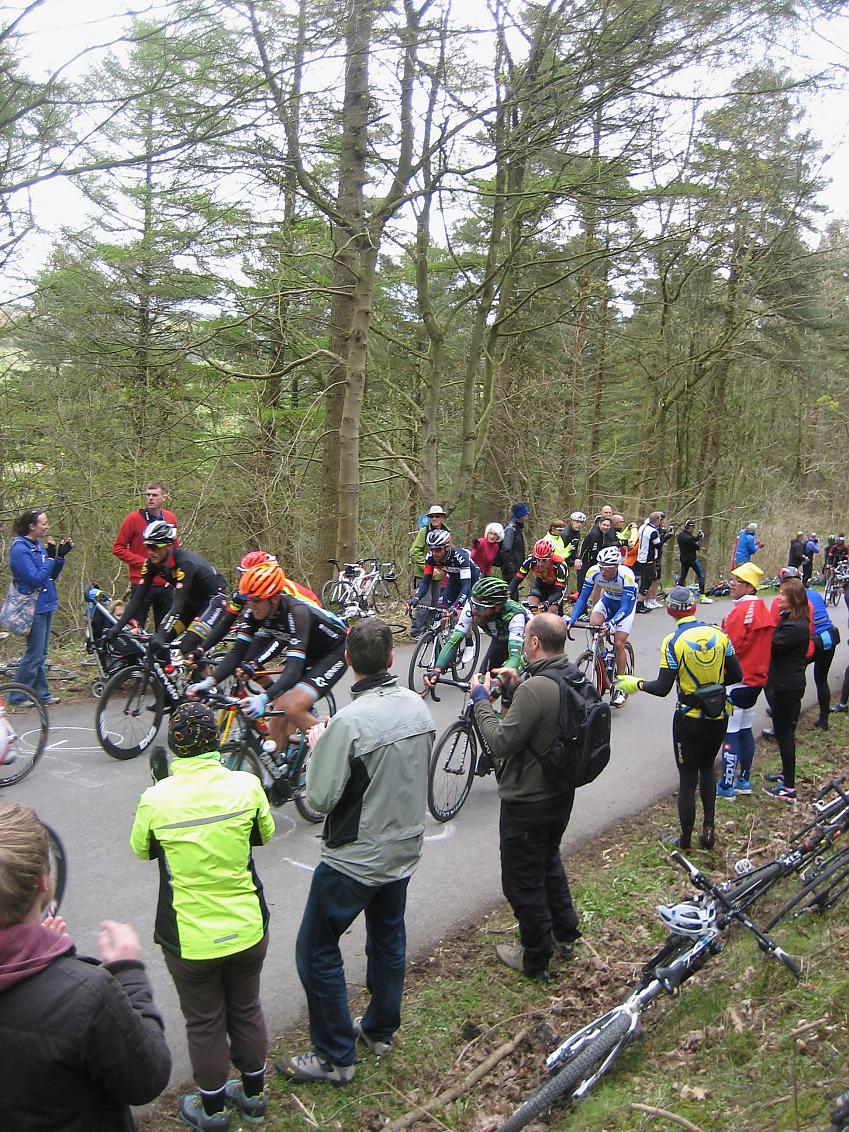 Pro cyclists run out of gears on Bickley Gate climb, near Scarborough

It’s easy enough in principle. Assuming the use of the industry-standard 700C wheels – a smaller diameter wheel will reduce gearing accordingly, and users of small-wheel cycles such as a Brompton or Moulton will find it harder to achieve a really high top gear – you simply need a larger sprocket on the back wheel than the smallest chainring on the chainset.

The problem is not so much the low gear, but obtaining a nice low one while retaining a spread of ratios wide enough to give a useful top end.

There are numerous ways to tackle the challenge, including derailleur gearing, hub gears, ‘hybrid’ gearing that combines the two, and the interesting Schlumpf Drive.

The traditional route taken by touring cyclists in search of a wide range of gears including a super-low bottom ratio is the triple chainset, as exemplified by the TA Carmina design featured in Cycle June/July 2018. Out of fashion today, both on-road and off, the triple remains the most versatile of derailleur transmissions, with gears widely spread at fairly closely spaced intervals. The main drawbacks include overall weight and the wide ‘tread’ needed to accommodate the extra chainring.

Complete road and MTB triple transmissions are available out of the box from Shimano: the Tiagra 4703 groupset, for example, offers 10-speed STI drop-handlebar shifting with a 30/32 bottom gear, but is not compatible with the firm’s older 10-speed components; Sora’s 9-speed triple offers a 30/34 (24") lowest ratio. In both cases, the usual 50/39/30 chainring combo found on road chainsets is bigger than ideal.

Suitable for those riding with flat bars or using tyres wide enough to require their chainset dimensions, MTB drivetrains have always featured gearing low enough to meet the demands of the discipline. The current 10-speed Deore 6000 groupset is no exception, with a lowest ratio of 22/36, or about 17" on a 700C wheel. Combine this with the highest ratio of 98" and it’s easy to see why the triple is such an effective wide-range transmission. 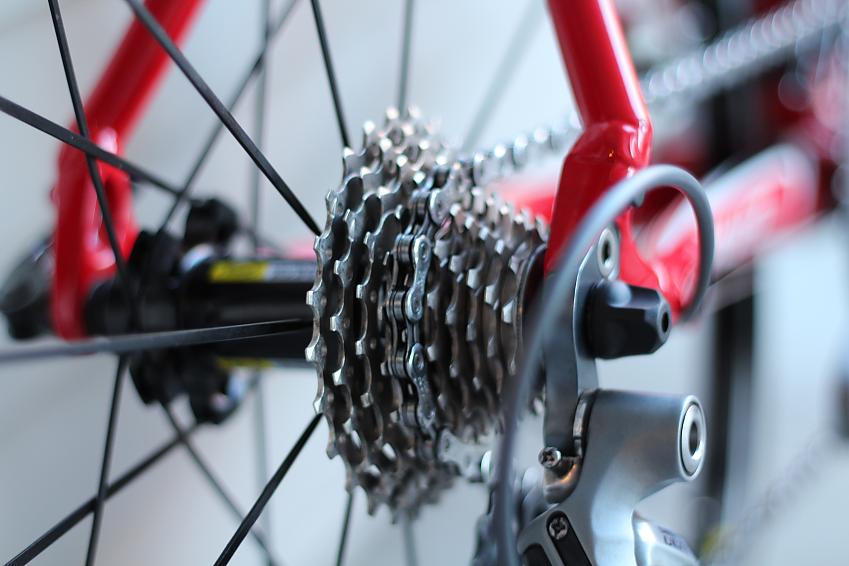 If building a ‘custom’ triple drivetrain around, say, a TD-2 chainset (spacycles. co.uk), note that road triple front mechs such as Shimano’s FD5703 can be tricky to set up with non-standard size chainrings. If converting from a double chainset, the cost will include a new front mech and STI lever, unless you are using bar-end controls or down tube shifters, and very likely a replacement rear mech with a cage long enough to take up the chain slack.

Shimano 9-speed road STI levers are compatible with 9-speed MTB rear derailleurs and cassettes. Additionally, older 9-speed Shimano MTB rear mechs are compatible with the manufacturer’s road 10-speed shifters (including barcons and down tube levers but not Tiagra 4700 components), making it easy to find a mech that will readily cope with a 34 or 36t rear sprocket.

More recent ‘Shadow’ 10- and 11-speed MTB mechs aren’t compatible with the older shifters, and indeed any plan to build a non-standard pic’n’mix drivetrain using these parts needs careful research to ensure acceptable shifting performance. For example, a JTek Shiftmate in many cases allows otherwise incompatible components to work in sweet harmony. We reviewed one in the Dec 16/Jan 17 issue.

Designed to do away with the need for a front derailleur mechanism, the 1× (or one-by) drivetrain is the latest trend in lightweight cycle transmissions. It’s available for both flat-bar MTBs and dropbar road and gravel bikes, albeit with a different overall gearing emphasis for each.

Visually impressive thanks to the massive cassette required to provide a really low bottom gear using a chainring large enough to provide a decent highest ratio, 1× has been made possible by the development of rear derailleur mechs capable of handling colossal rear sprockets of up to 50t or so.

Since 1× uses a single chainring, the ’ring needs to be reasonably large for road use (around 40t), to provide a suitably high top gear. This means that the lowest ratio in a 1× transmission may not be as minuscule as might be expected. 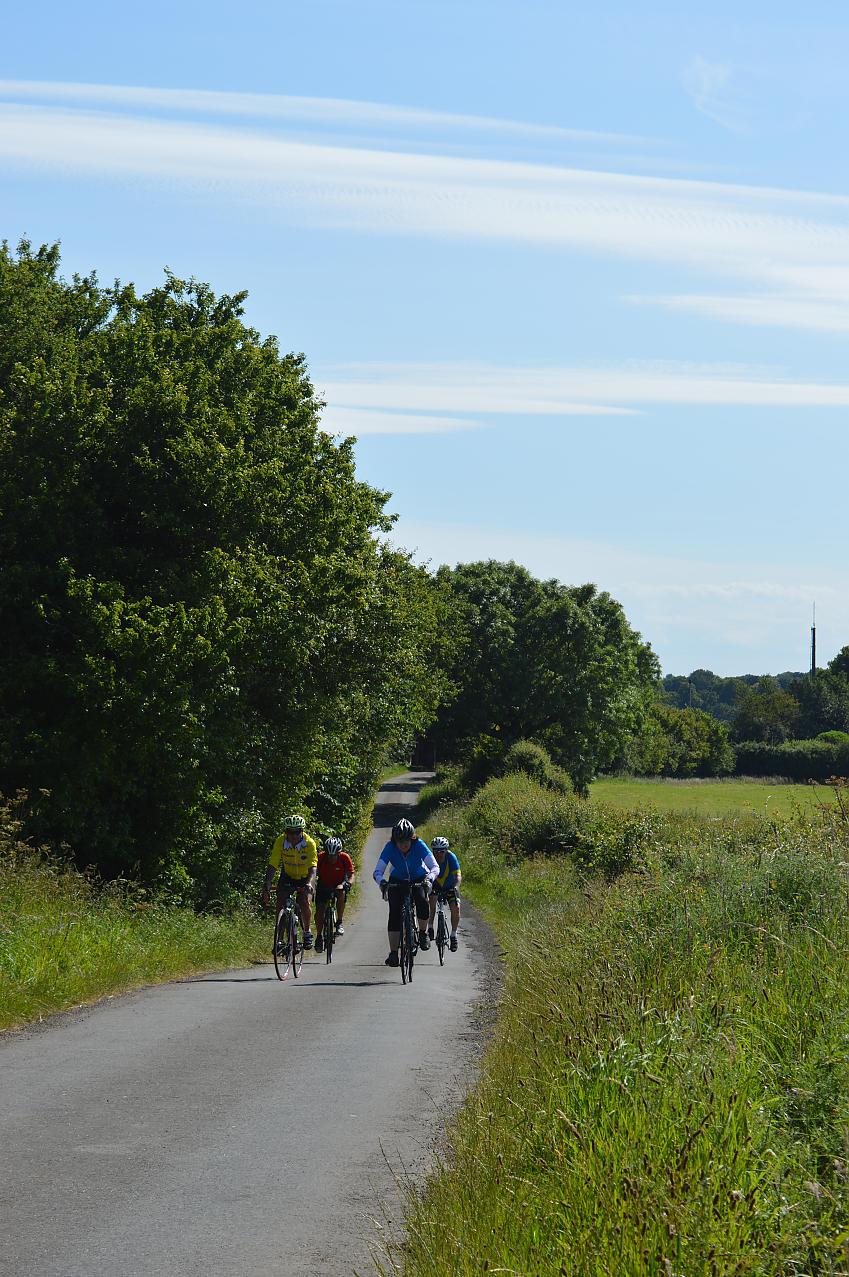 Modest climbs can feel tough at the end of longer rides

In any case, here we are on the wilder shores of low gearing potential, where it is possible, if not necessarily desirable, to achieve ratios of 1:2 or lower, or a gear of less than 13".

If interested, there’s no need to resort to SRAM’s 12-speed Eagle or Shimano’s XT 12-speed transmissions for a 50t sprocket; in amongst the SunRace range may be found cassettes to suit all tastes, including 11-speed with 11-50t, as well as a less intimidating 11-46, and 10-speed 11-46 too.

Touring cyclists in search of a wide range of gears traditionally use a triple chainset.

Getting the chain to work happily on such cassettes may not necessarily require a dedicated rear mech. Adventurous experimenters have demonstrated that, for example, a SRAM GX 10-speed rear mech with Rival 11-speed dual control right-hand lever will work with an 11-50t 11-speed cassette.

Other combinations may also be possible, given the vast array of options now flooding the market. Component manufacturer MicroShift, for example, offers a near-comprehensive range of rear and front mechs, bar-end, flat-bar and dual-control shifters, and cassettes operating over anything from 8-speed to 12-speed. The 9-speed Advent drivetrain is arguably the pick of them for those looking to assemble a low-cost, wide range derailleur transmission.

Sorry, you lost me with ‘gear inches’

There are two practical ways to get lower gears on your bike: fit a smaller chainring (i.e. one with fewer teeth) and/or fit a larger cassette (i.e. one whose largest sprocket has more teeth).

Without workarounds, that requires mountain bike derailleurs and shifters too, plus a ‘flat’ handlebar.

If you want mountain bike gearing with a drop handlebar, the simplest solution is to use suitable bar-end shifters from, for example, MicroShift. But there are other options…

Advent’s range includes front mechs, which, despite the fuss over 1×, increase the flexibility of any derailleur transmission, offering either more ratios or a wider range. Other double chainring setups offer an increasingly wide range. The Shimano GRX 2×11 groupset, for example, provides gears from 24" to 118".

To go lower, there’s no need for a triple: it’s now possible to combine a widely available compact road double chainset (50/34) with a super-wide range cassette such as an 11-46 and appropriate rear mech as detailed in the 1× section to get a really useful range from 19" to 122". Fit a subcompact chainset such as Sugino’s OX601D (Cycle Aug/Sep15) with an inner ring as small as 24t, and it’s easy to go way lower

Maybe life’s even easier than that. With a gear-hanger extender such as a Wolftooth RoadLink, you can use a much larger cassette with your existing derailleurs and chainset. I have a RoadLink and an 11-40t Praxis Works Wide Range 10-Speed MTB cassette on my parts shelf. 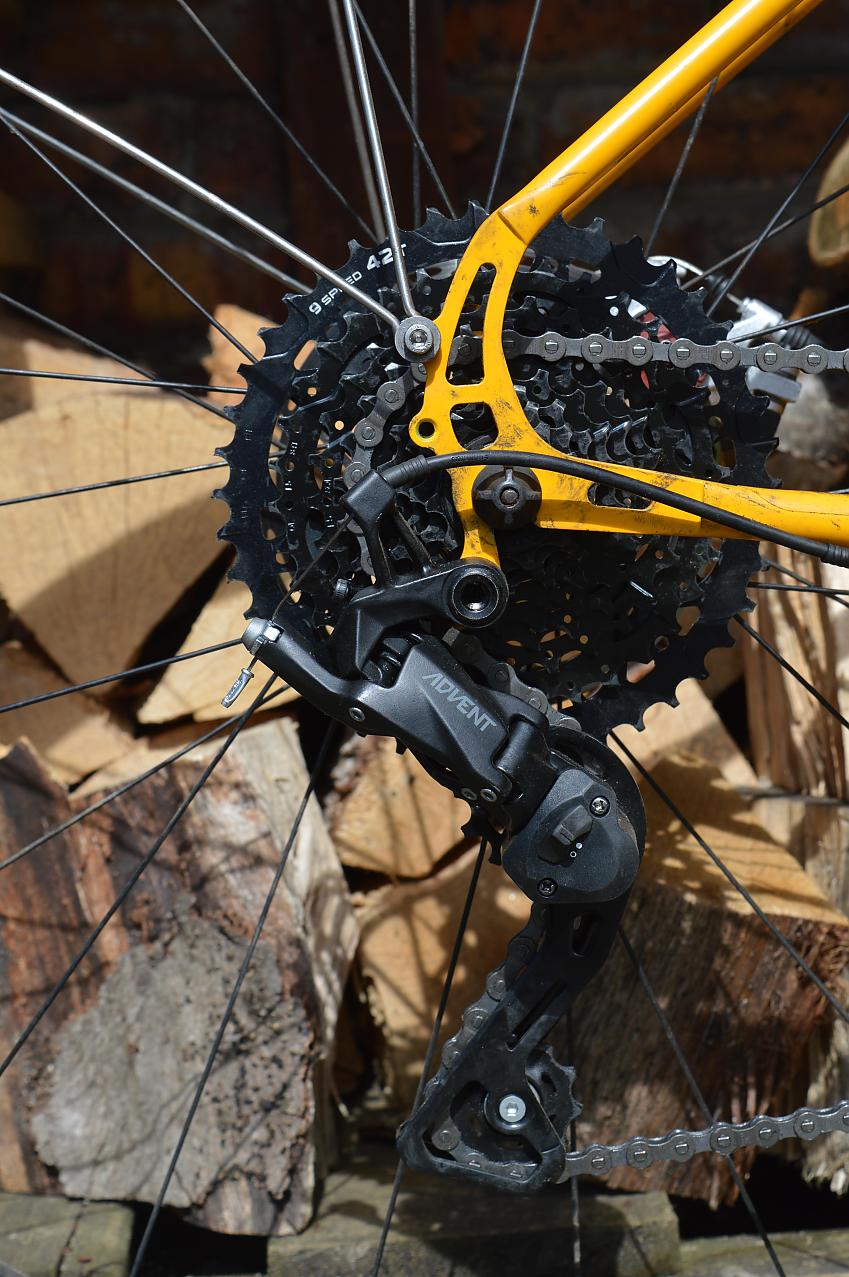 Adding the RoadLink and switching to the 11-40 cassette from my bike’s usual 11-34 takes minutes and needs no change of chain length (as long as certain chainring-sprocket combinations are avoided). This provides a comfortable 22" bottom gear, low enough for the Bwlch-y-Groes with two filled panniers.

I use the RoadLink with a 9-speed XT rear derailleur (in a 2×10-speed setup) but both the RoadLink and its GoatLink sibling can be used with more modern rear mechs and a bigger cassette to achieve even lower gearing. Touring cyclists of yesteryear would be impressed.

Besides the obvious benefits of enclosing their working parts in a protective casing, hub gears have one apparent attraction for the low-gear enthusiast: almost all of them offer one or more gears smaller than the direct drive ratio derived from the transmission sprockets.

Hub gear internal gear ratios are expressed as a percentage of the input (direct drive) ratio. If, for example, a three-speed’s low gear is 73% of the direct middle ratio and top gear 136%, using a 39t chainring and 19t sprocket, gives gears of 75", 55" and 40" with a 27" wheel. The only way to alter gearing is to change the transmission sprocket sizes, and doing so alters all the gears in the available range.

This might look a great way to achieve a ludicrously low bottom gear by using a suitably small input gear, but some hub gears specifically limit the lowest permissible drive ratio, expressed as chainring-to-sprocket, to prevent a strong rider over-stressing the internals. Rohloff’s Speedhub, for example, is limited to 2.38:1 for solo use and 2.5:1 for tandem use, while Shimano’s Nexus 8-speed has a 2:1 restriction.

In practice, this means a Rohloff hub with 26” wheel and 38/16 transmission gives a low gear of 17", while a Shimano Nexus 8-speed hub with the same sprockets offers only 27". Shimano’s Alfine hubs are reported to work reliably at ratios as low as 1.6:1. In any case, torque limitations limit the low gearing potential of hub gearing using 700C wheels, and it’s important to check with your hub’s manufacturer if this may be a concern.

‘Hybrid’ gearing combines hub and derailleur shifting. Historically most popular on small-wheeled machines, hubs such as the Sturmey Archer CS-RF3 marry a derailleur cassette and, in this case, a 3-speed hub gear. Any torque limitation imposed by the hub gear applies to the lowest gearing in use in the derailleur transmission.

The same consideration applies to the Schlumpf Mountain Drive, which comprises an epicyclic two-speed gear acting within the chainset. The Mountain Drive’s low gear is 40% of direct, offering a massive reduction in ratios applicable to a wide variety of transmissions. 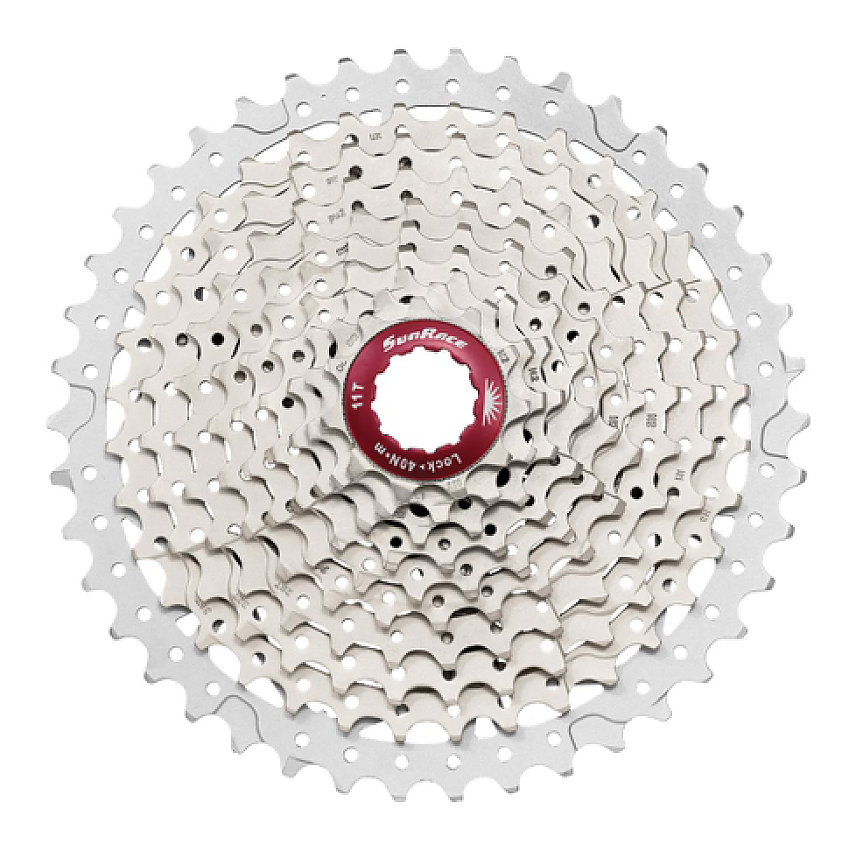 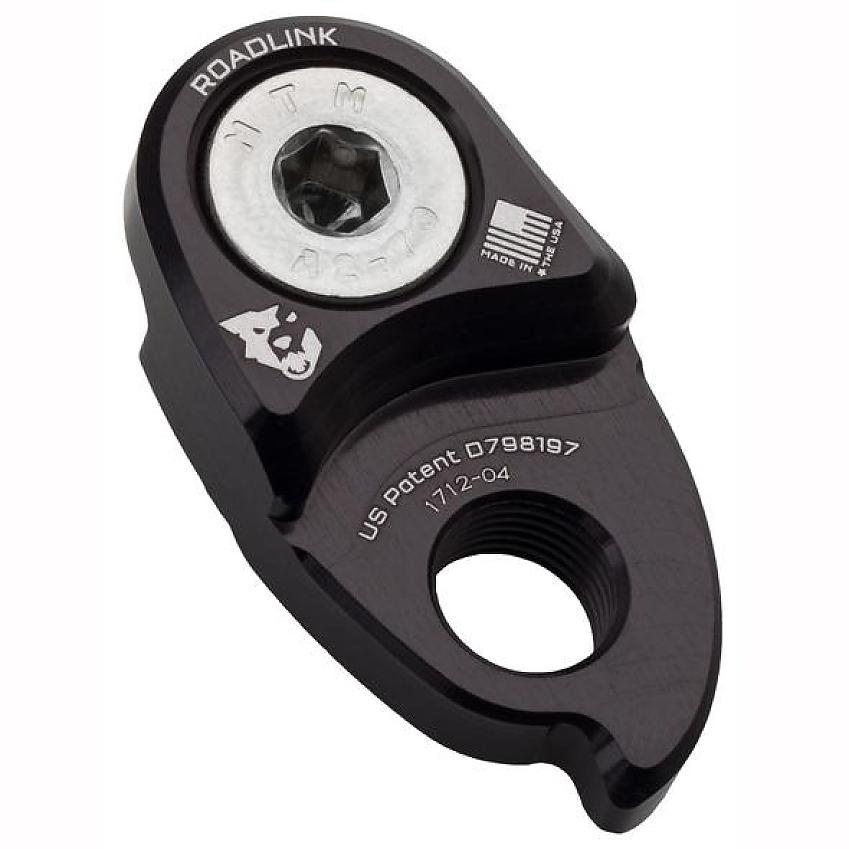 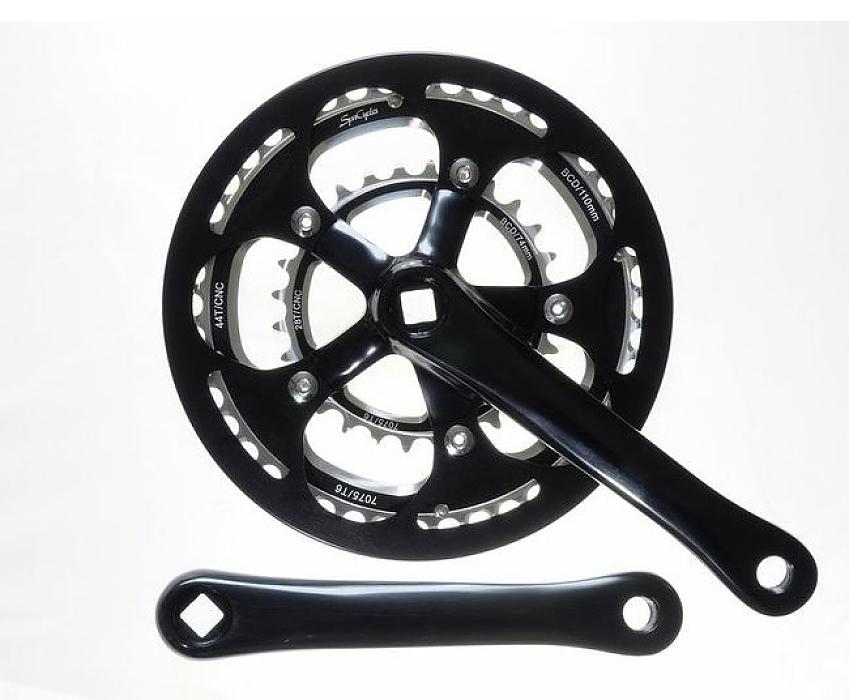 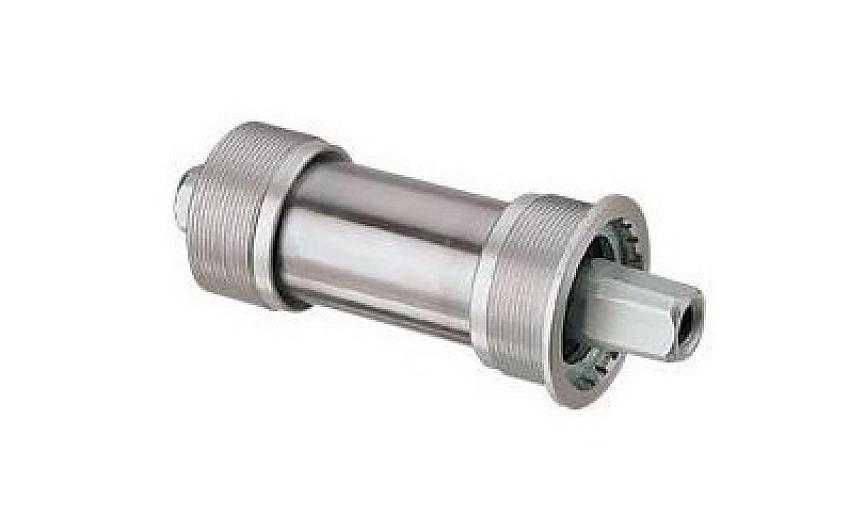 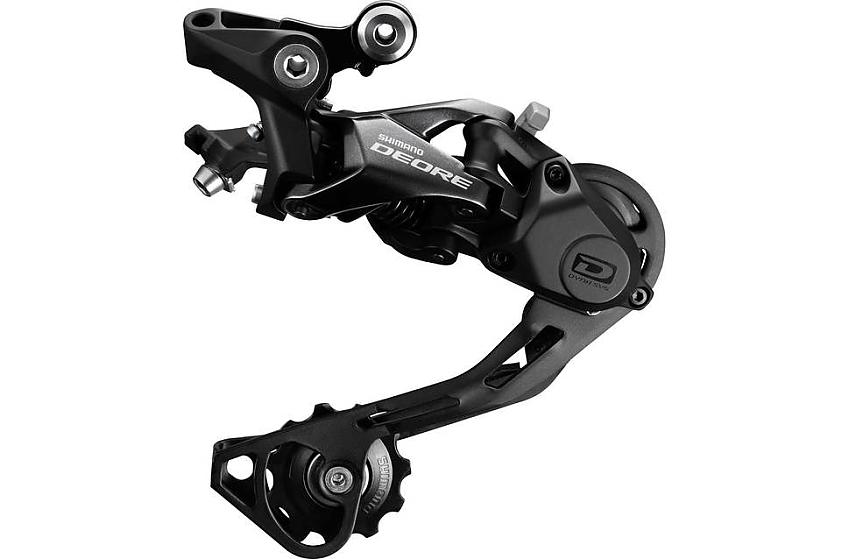 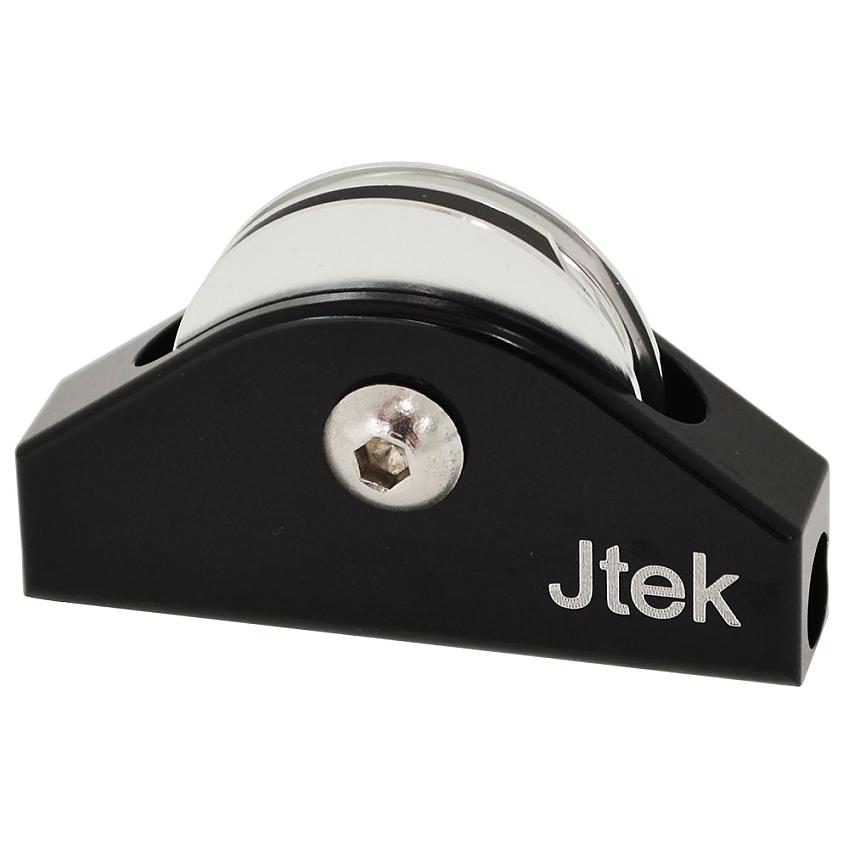 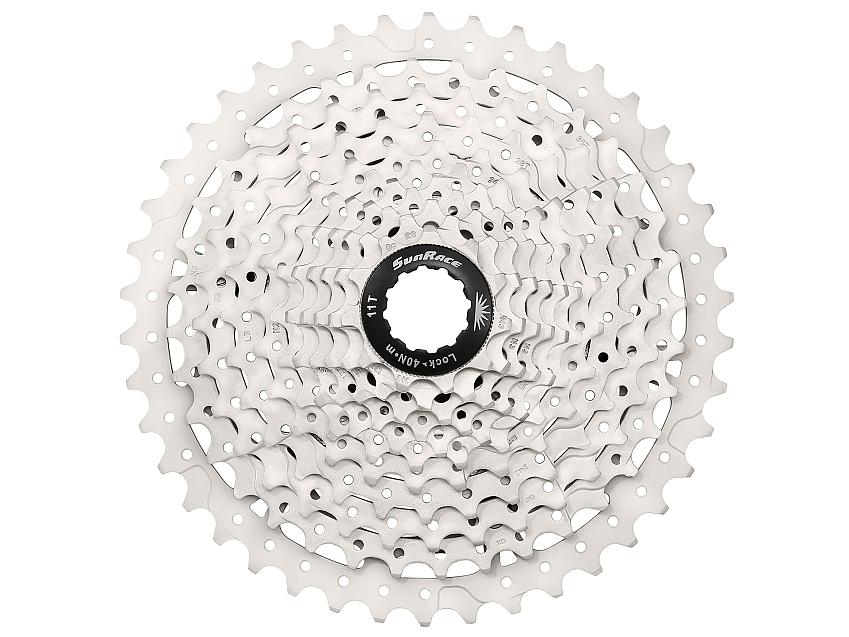 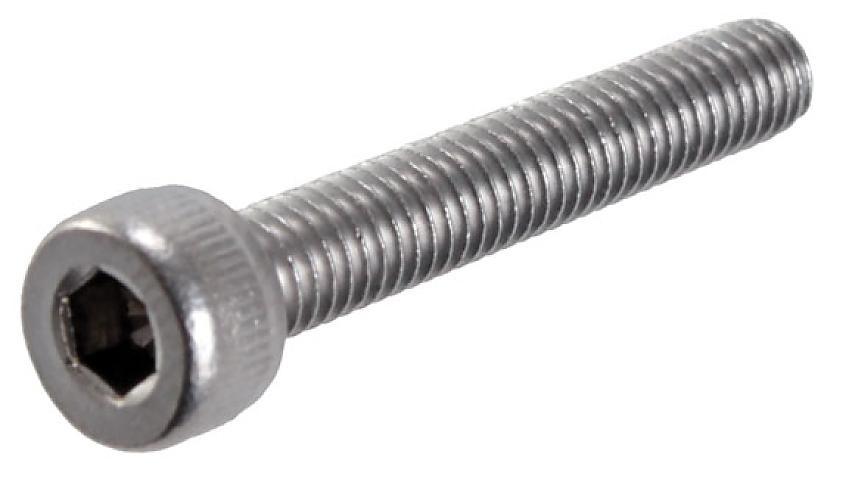 How do you measure gears on a bike? View