Dynamo lighting makes a lot of sense for utility, sporting, and touring cyclists alike. The advantages over battery power are clear: it’s always available, avoids battery-charge-level anxiety, and is as secure from theft as the cycle itself. Downsides? It needs a power source, is usually slightly heavier, and can’t easily be removed for a fast day-ride.

Thanks to the latest LED technology, even mid-range dynamo front lamps now put out plenty of light. Their 50 lux or so is fine for urban riding – and comfortably exceeded by the 70 to 100 lux available from the lamps tested here, which throw enough light for fast commuting on unlit rural lanes.

So bright are these lights that they must be adjusted correctly if they are not to dazzle oncoming road users. Properly aimed, they provide excellent illumination thanks to the design of the reflector. The LED shines backwards onto the reflector, which then projects it forwards in a more diffuse beam. Some light is leaked to the sides to promote all-round visibility.

All the lamps on test can be connected to a rear lamp and, of course, must be paired with a suitable power source. Hub dynamos from SON, Shimano, and SP, producing 6V and 3W, are favoured by most, although the Velogical dynamo tested in the June-July 2018 issue is an interesting alternative. 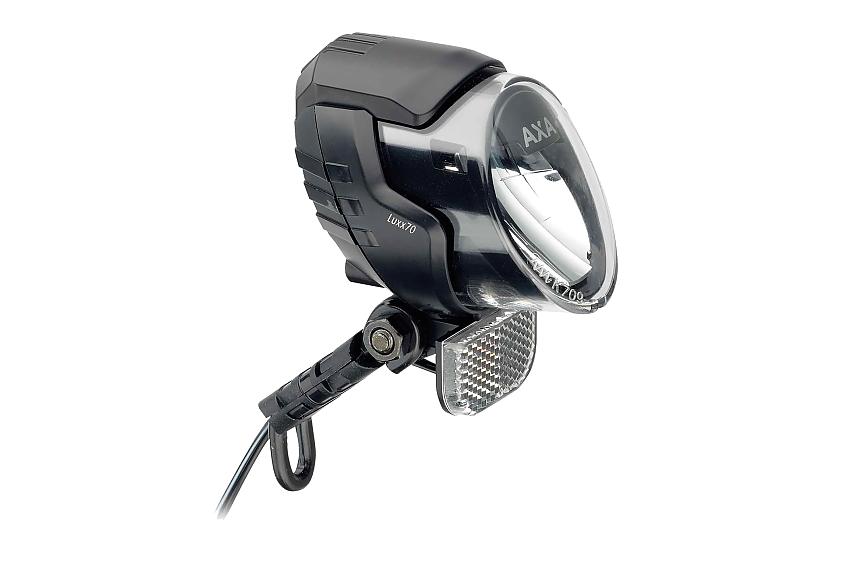 Featuring a USB port and offering, as the name suggests, a useful 70 lux, AXA’s offering is comprehensively equipped and yet the least expensive light here.

It’s a great choice for the rider wanting on-board device charging, although the instructions contain a stern warning against using the port in wet conditions.

There’s a selection of bracket plates for mounting to various points on the bike, with a standard fork crown fitting installed as supplied. The lamp has on, off, and auto modes, the latter using a light-sensor to switch it on as and when needed, plus a four-minute standlight duration.

The most intriguing feature is something called Intelligent Beam Technology, which alters the light’s focus to throw a short, wide beam at low speeds and a longer, further-reaching beam at higher speed, presumably relying on voltage increase to assess speed. Perhaps the only minus point concerns the wires for rear lighting, which if not required hang free, with no obvious place to tuck them away from rain water. 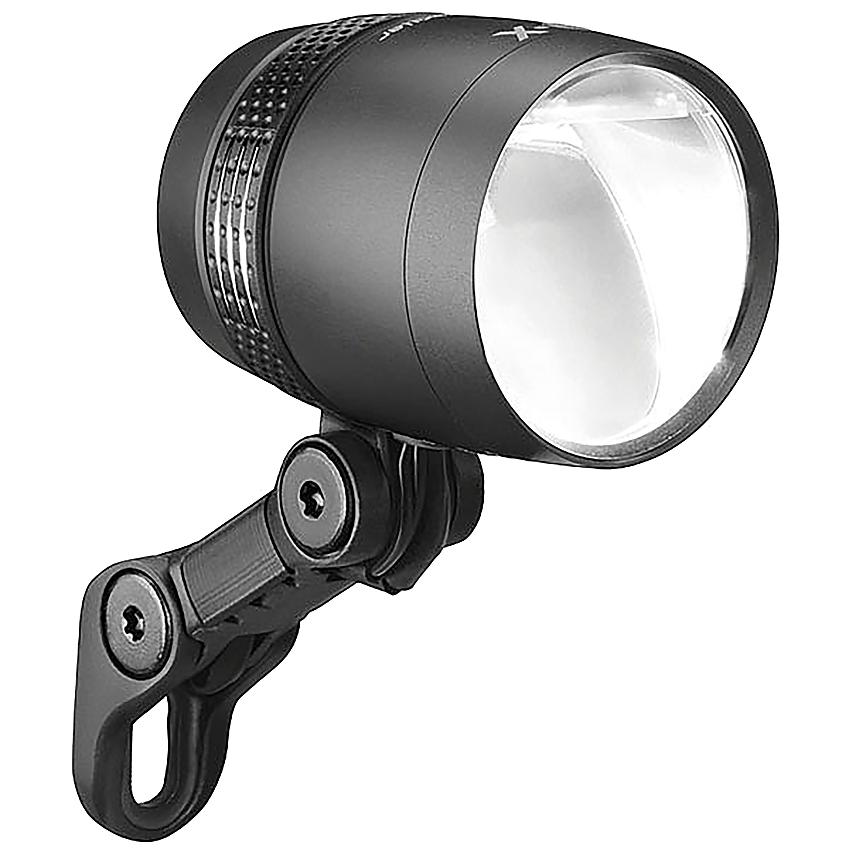 This stylish front lamp uses ‘state of the art’ optics, including an intriguingly curvaceous, crease-free reflector, to cast a broad, powerful 100 lux beam that effectively lights up objects more than 40m ahead.

The CNC machined aluminium housing can be rotated within the textured ring (with wires suitably re-routed) to allow the lamp to be hung upside down.

As supplied, it is intended to be fixed to the fork crown, and can be adjusted for height and beam angle via the twin-pivot bracket. This incorporates a cable guide and a clip that covers the rear light wiring connectors.

The large central on-off button on the back is surrounded by a blue light emitting ring. When switched on, the light operates in Senso mode, dimming the main LED in daylight while the small daytime running lights at the top of the lens shine brightly for visibility. 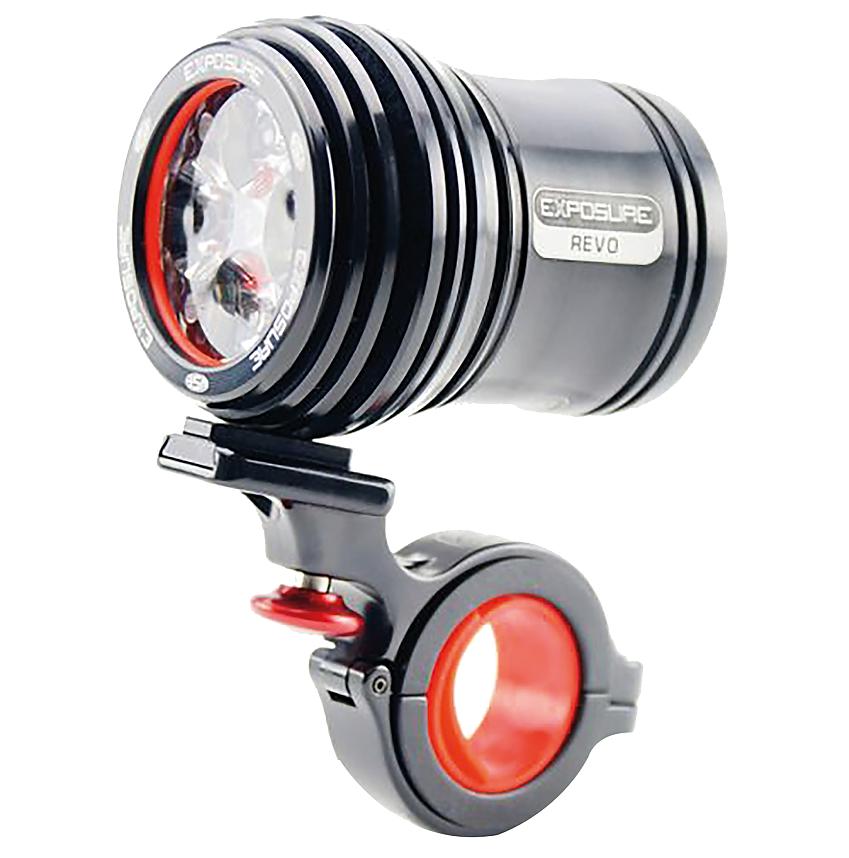 Tested in Cycle June-July 2017, Exposure’s Revo is lightweight, throws out a potentially dazzling 800 lumens (no lux figure quoted) at 15mph, and is handle barmounted using the Sussex firm’s excellent quick-release bracket. A uni-axial plug connects the dynamo wiring to the back of the lamp, making it very quick to remove and, of course, easier to steal than most dynamo lights.

Easy removal does allow the user to take advantage of the Revo’s standout feature – thanks to Exposure’s Stand Light Technology, the lamp puts out a relatively dim light for around an hour after stopping, giving the Revo a useful torch function when, for example, setting up camp after dark.

There’s no on-off switch, which means pulling the plug from the lamp to turn it off for no-drag riding – if the light is paired with a hub rather than a bottle dynamo.

Verdict: Super-bright and versatile, but could do with a switch 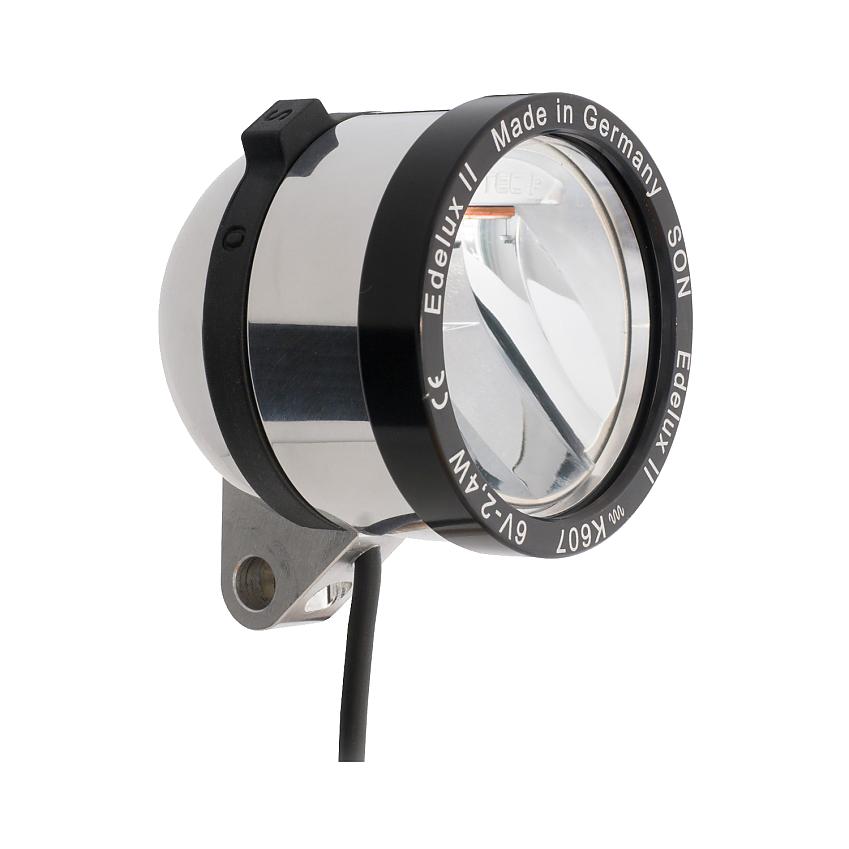 SON’s beautifully made and immaculately engineered products have been at the forefront of hightech dynamo-powered cycle lighting for two decades. The Edelux II front lamp uses B&M optics enclosed in a waterproof CNCmachined case, which is available in a range of anodised colours and in a polished finish.

The mounting bracket supplied is a sturdy, bent steel rod affair, attached using the fork crown bolt and limited in adjustment to beam angle only. The power cable is offered in three lengths, the shorter two readyfitted with female connectors for SON’s own dynamo hub. There’s a rear light connector hidden away inside the casing.

Switching between off, Senso, and on is taken care of by the black plastic ring around the casing. Maximum output is a searing 100 lux, and the standlight lasts for around four minutes after coming to a stop.

How to find the best dynamo front lamp for cycling

Not all lamps have an on/ off switch; those that don’t shine whenever you’re riding. Many have a ‘standlight’ that continues to shine for minutes after stopping, improving visibility at junctions etc.

Most front lamps have a connection for a rear lamp too, which results in a small drop in front light output if used. Some lamps have a USB port, enabling dynamo output to power or recharge a mobile phone or GPS computer.

Can be found stated in lumens or lux. The former measures intensity of light output, the latter how brightly it illuminates in terms of lumens per square metre, which diminishes with distance.

Most dynamo front lights fit to the fork crown and are supplied with a suitable bracket. To fit such lights elsewhere, you’ll typically need a 6mm bolt and ingenuit