The Brompton is iconic but far from the only folding bike option. Dan Joyce tests a £200 B’Twin Oxylane 100 and a big-wheeled Tern Node D8

As brilliant as the Brompton is at folding compactly and travelling fuss free on public transport, it’s not the best folder for every cyclist. Not everyone can afford a four-figure price tag – or justify it if the bike might be used infrequently. Not everyone wants the cycling experience you get on 16-inch wheels, nor needs such diminutive folded dimensions.

The two folders here are different from the Brompton in different ways. Decathlon’s B’Twin Oxylane 100, formerly known as the Tilt 100, costs a mere £199.99. (Last year it was £149.99!) Cheap folders have a poor reputation. They are typically heavy, handle poorly, and have flexible hinges. Yet Decathlon has good form when it comes to offering decent bikes at bargain prices.

The Tern Node D8, which I recommended in the Cycle Shopper feature last issue, is defined by its 24-inch wheels. It’s essentially a conventional city bike that happens to fold down for storage. At £900 (up from £850 earlier this year), it’s clearly not a direct competitor to the budget B’Twin. 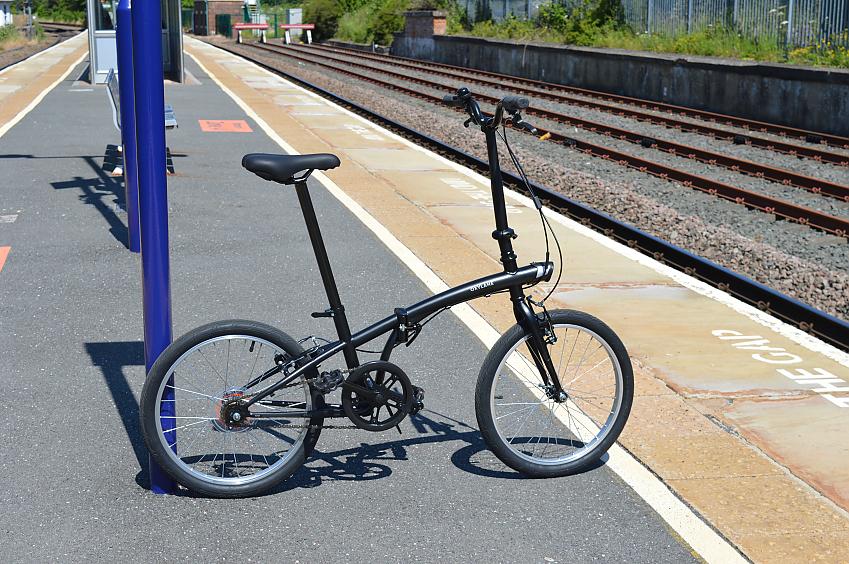 Like many budget bikes, the B’Twin has a high-tensile steel frame and fork. Hi-ten is strong and heavy. Despite being a spartan singlespeed, the Oxylane 100 tips the scales at 13.4kg. It shares its frame with the Oxylane 120 (£249.99), which has 6-speed derailleur gearing, mudguards, and a kickstand, so there are fittings for those things on this model too, as well as rear rack mounts. 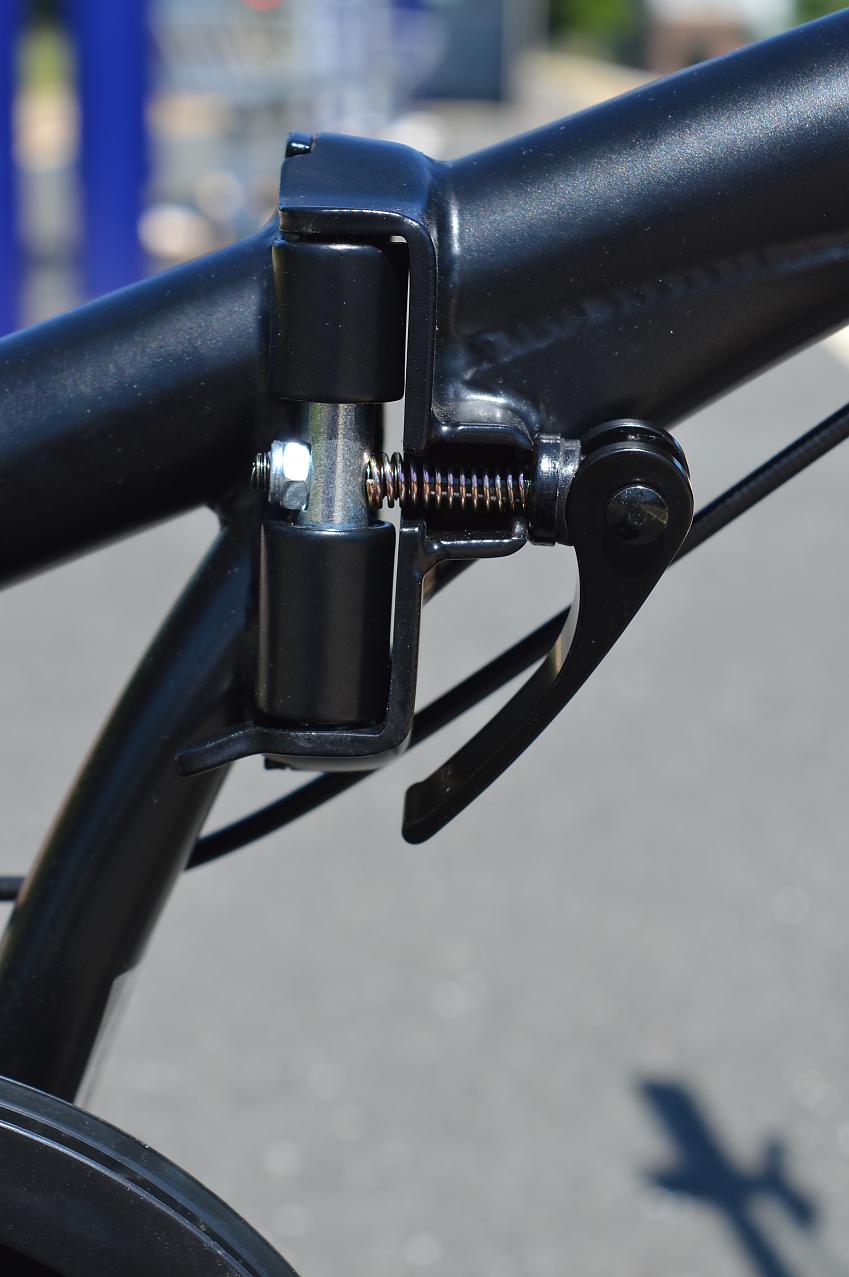 The frame simply folds in half. With the stem folded and the seatpost lowered, this results in a train-friendly package measuring 76×67×41cm. The short folded length is due to the fact that it’s a short bike to begin with: the wheelbase is only 92cm. (A Brompton, which folds into thirds, has a 104cm wheelbase.) Folding took me 20-30 seconds. The pedals don’t fold.

The frame hinge has a neat security feature. Its QR lever is attached to a cylinder, which is held down into a hole in the frame joint by spring pressure. To open the hinge, you have to undo the QR lever and (still holding it), turn it 90 degrees and lift the cylinder upwards to disengage it from the frame. When you’re unfolding the bike, this cylinder pops back into place automatically. 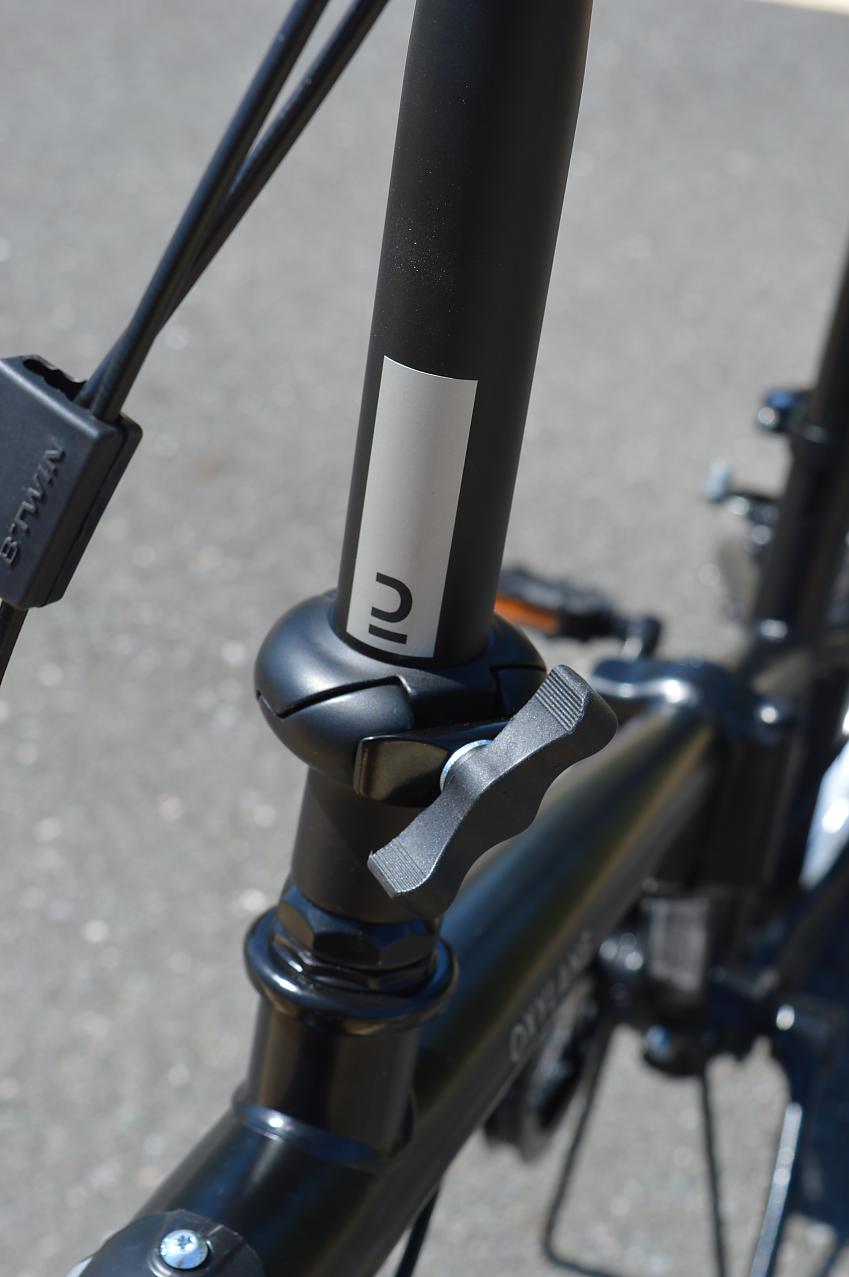 The stem hinge simply clamps closed. Make sure you do this one up properly before setting off!

When it is unfolded and ready to ride, the B’Twin is a very short, upright bike. The stem is really tall and the effective seat tube angle is slacker than it looks because the seat tube is behind the bottom bracket. Your weight is very much over the back wheel. 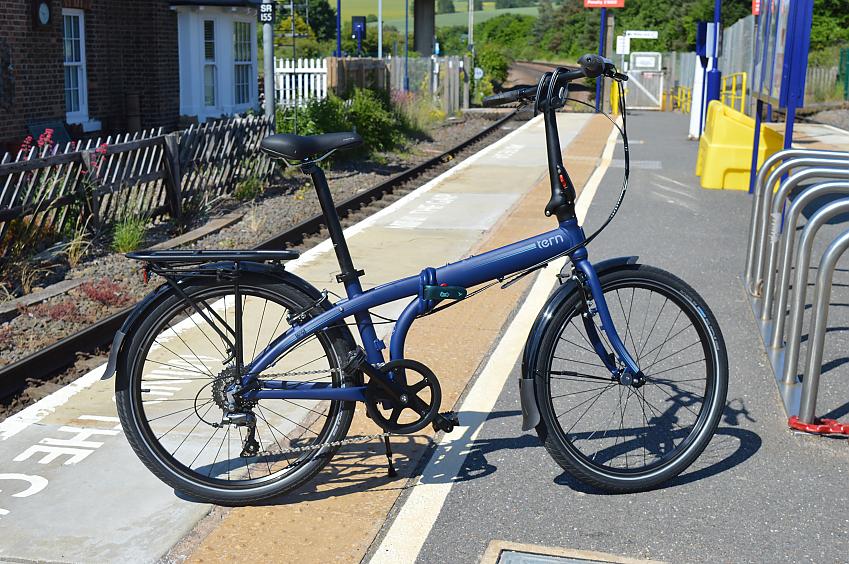 The Node D8 has a beefy aluminium frame and a hi-ten steel fork. Like most of Tern’s folders, it ‘N-folds’. The frame folds back on itself so the front wheel ends up pointing forward, making the folded package slightly shorter. It’s still large (89×78×43cm) because the Node D8 is a long wheelbase bike with big wheels.

A few years ago those 24-inch wheels would have disqualified the Node as luggage on UK trains. As well as being ‘fully folding’, bikes had to have ‘wheels 20in or smaller’. This requirement has been quietly dropped. Neither wheel size nor maximum dimensions are listed in National Rail's Conditions of Travel, which only say that folders must be ‘fully folding’ (and, like any luggage, not cause obstruction, delay, or danger). I checked this point with the Rail Delivery Group, who confirmed it. 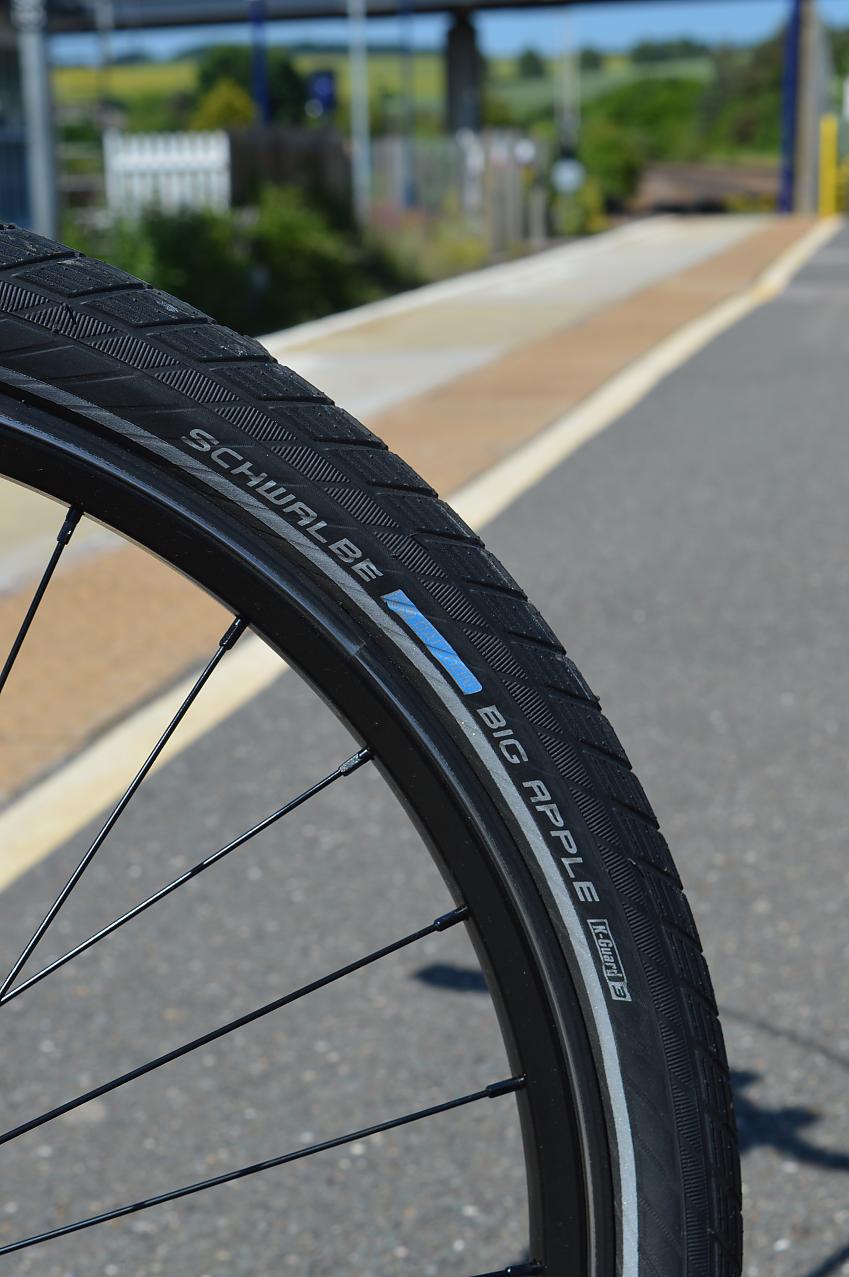 Folding is straightforward as long as you remember that the front wheel has to point forward. Both hinges have user-friendly levers with sprung catches to prevent them coming undone by accident. Start by dropping the seat down (or you can do this later). Then fold the frame in half; the fork and chainstay have magnets at the dropouts to hold the folded frame together. Drop the handlebar down and (optionally) fasten it to the frame with the rubber strap on the main frame tube. Fold the pedals. Use the adjustable stem to orient the handlebar flush with the frame. It took me about 30 seconds.

Like the B’Twin, the folded Tern can be rolled around on its wheels if you extend the seatpost. But roll it carefully as those magnets can sometimes unfasten.

When unfolded, the Tern’s seatpost has height markings to make it easy to position the saddle. There’s enough post for riders up to around 195cm tall. As with the B’Twin, there’s nothing to stop a thief from pulling the post right out, so be careful where you park.

The B’Twin’s singlespeed drivetrain has a twiddly 48in gear. That’s okay for short hops of two or three miles but frustrating if you want to go further. You could buy and fit a 16t freewheel in place of the 18t supplied, which would raise the gearing to 54in.

The bike’s budget Alhonga V-brakes (steel callipers, plastic levers) are somewhat spongy but good enough. You’re never travelling particularly quickly on the Oxylane 100. It’s a similar story with the own-brand 44-406 tyres. They might be stodgy but your speed is capped by the singlespeed gear already. 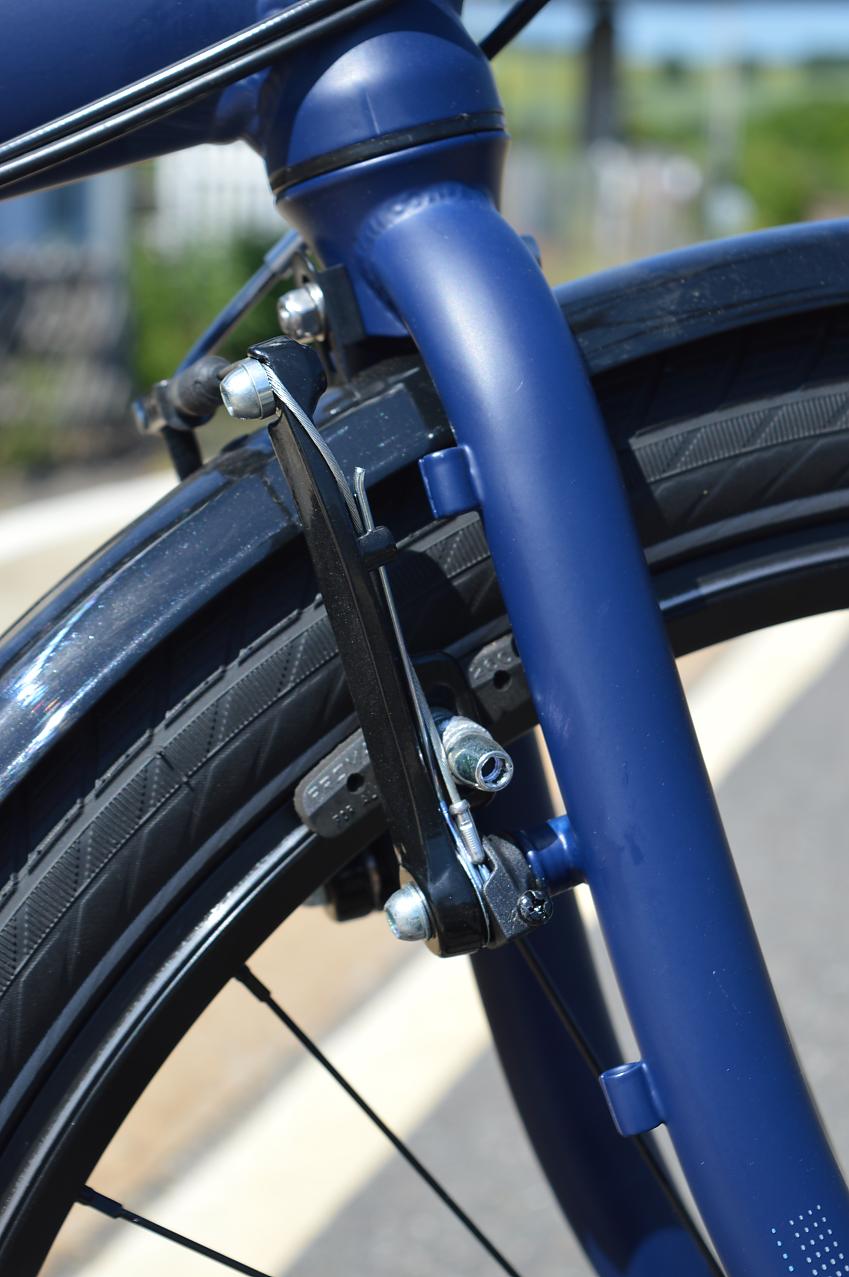 I'd prefer the brake in front of the fork

The B’Twin’s other components are mostly steel and mostly fine. The one that might not be, depending on your height, is the seatpost. Decathlon says the Oxylane 100 is suitable for riders from 145-185cm tall. It isn’t. I’m 177cm (5ft 9 1/2in) and the minimum insertion mark was just visible above the seat collar when I put the saddle high enough. Taller riders will be out of luck. 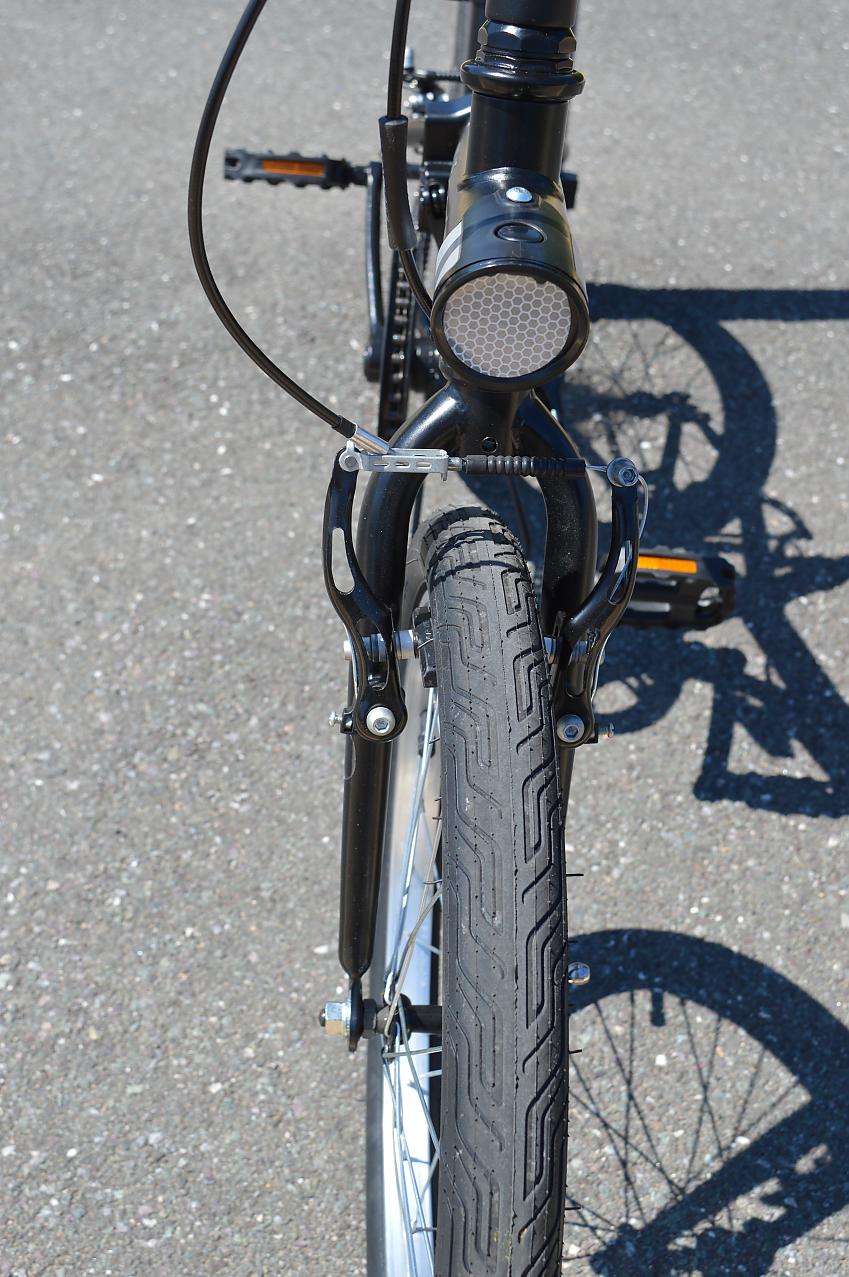 By contrast, the Tern comes equipped for utility trips with mudguards, a rear rack, and a kickstand. Gearing is 1×8 Shimano Claris with a twist-grip shifter that’s less likely to get bashed in transit than a trigger shifter. It’s inexpensive stuff that works fine. The range is rather high: you don’t need a 96in gear on this bike but might want something smaller than 33in, not least because the Tern will haul a fair-sized load. The pannier-capable rear rack is rated for 25kg, and there are head tube mounts for a Tern Luggage Truss, which will hold a bag weighing up to 7kg.

The Tern’s 24in wheels are fitted with 50mm Schwalbe Big Apple tyres. They’re perfect for this bike, enabling you to ride confidently and comfortably through potholes and over cobbles that would put the fear in you on a small-wheeled folder. 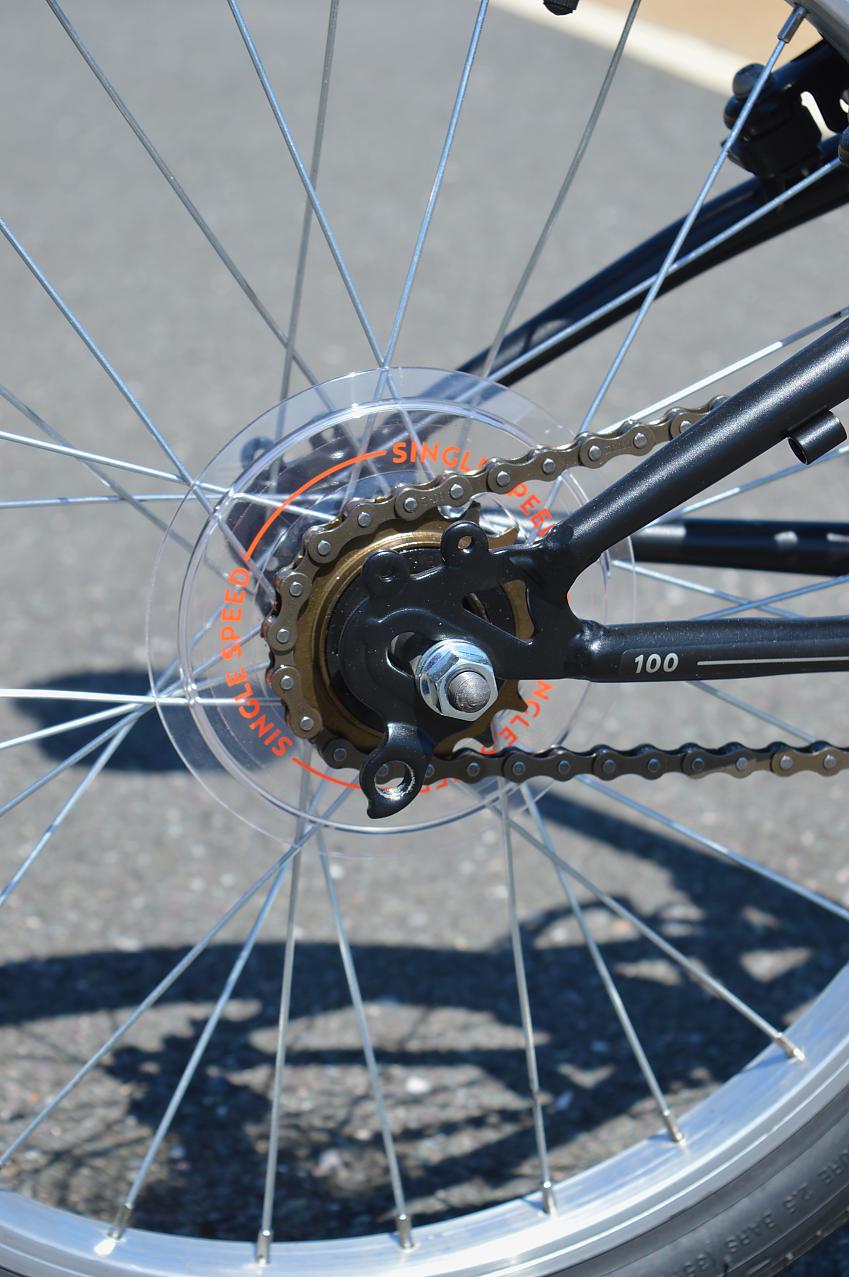 The Tern’s front brake is mounted behind the fork. The pads aren’t perpendicular to the brake arms, so I’d expect uneven pad wear and more frequent pad replacement as a result.

Actual brake performance is very good: the V-brakes themselves are better quality and they’re augmented by compressionless cable
outers.

Tern’s Andros adjustable stem is required to rotate the handlebar for the minimum folded size. It also enables you to set up the backswept handlebar wherever you want within a large arc, ranging from bolt upright to negative rise (i.e. pointing slightly downward). Adjustment is tool free and dead easy.

I’m average male height yet initially felt a bit like a circus bear on the wee B’Twin. The compact, upright riding position is not one that favours high-cadence pedalling: beyond about 12mph it’s easier to freewheel. It feels cramped for climbing too, so it’s perhaps as well the singlespeed gear is small.

Handling is curious, thanks to the bike’s short wheelbase, minimal trail, short reach, and slack seat angle. You do get used it, particularly if you’ve ridden other low-trail small-wheelers, and I was never travelling fast enough for the handling to be a problem. For the very short trips the B’Twin is intended for, I actually grew to quite like its relaxed, sit-up-and- beg position, spin-and-coast ‘can't rush' pedalling, and nippy steering.

The Tern is completely different: it rides like a standard, wide-tyred city bike. Steering is stable at any speed, thanks to a fairly normal trail figure, a longer wheelbase, and wider, larger diameter tyres that don’t so easily deviate from a straight line.

Those big tyres absorb the bumps of bad roads and poorly surfaced cycle tracks well, so it’s a comfortable bike around town. While you could use it for longer rides, I’d stick to journeys with single-digit mileages. Hilly country lanes are hard work on a 15kg bike with a 33in bottom gear, especially as the backswept handlebar feels most natural when set up for upright, roadster-style cruising.

If you want a functional folder on the tightest of budgets, the B’Twin Oxylane 100 is it. The handling is idiosyncratic and the gear is spinny, but if you can’t afford to spend three times as much as this on an entry-level Tern or six times as much on a Brompton, it’s perhaps your best option for bike-rail commuting or short urban rides that end with indoor parking. Interested? How tall are you?

The Tern Node D8 is better thought of as a normal bike you can easily fit in a hallway or car boot as opposed to a mixed-mode daily commuter. It will go in a train luggage rack (just), but if you’re doing that regularly a 20in-wheel Tern Link, like the B7 I tested last year, would do it better. The Node D8 is essentially a derailleur-geared Dutch roadster that folds in half. Handy. 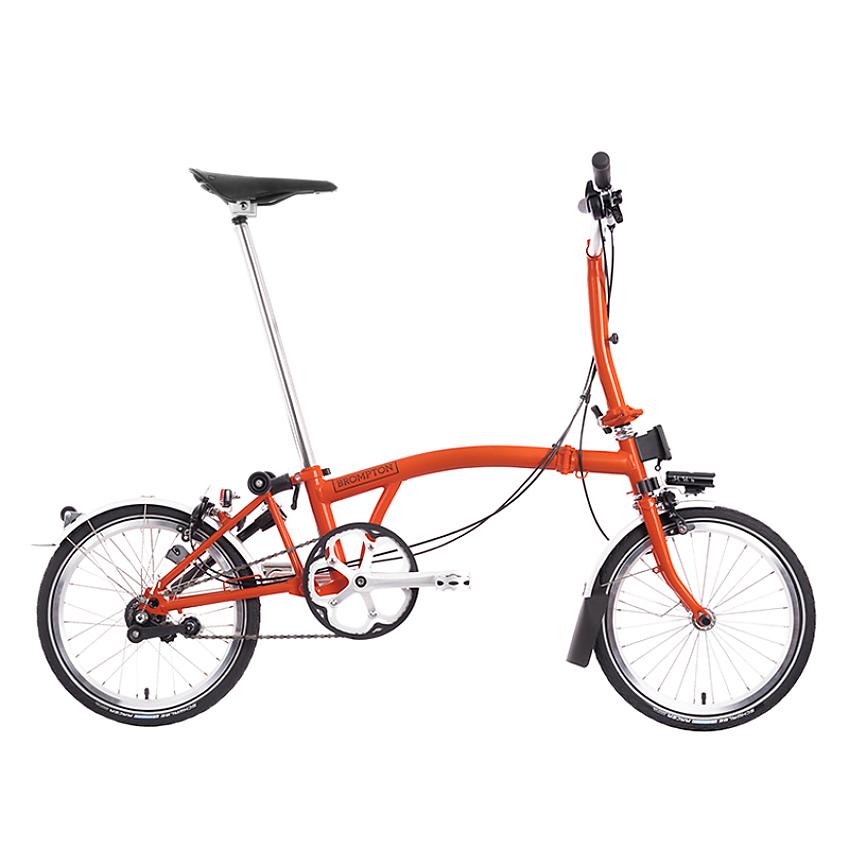 The folding bike benchmark. This is a three-speed versionTaxonomy with mudguards, battery lights, and luggage block. For regular-bike-rail commuting, it's worth the investment. 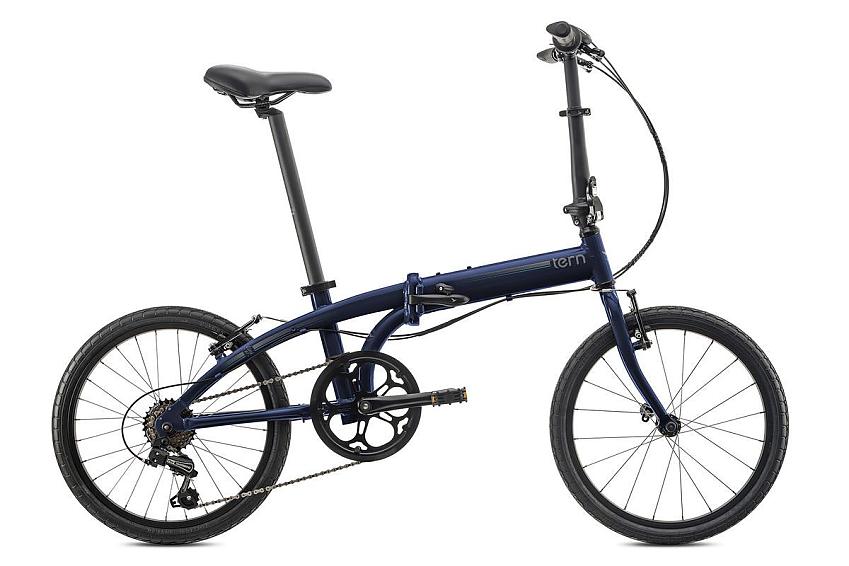 With 20in (406) wheels the Link folds smaller than the Node, making it a better mixed-mode commuter. It rides okay but you’ll need to  add mudguards.

At Cycle, we are proudly independent. There’s no pressure to please advertisers as we’re funded by your membership. Our product reviews aren’t press releases; they’re written by experienced cyclists after thorough testing. 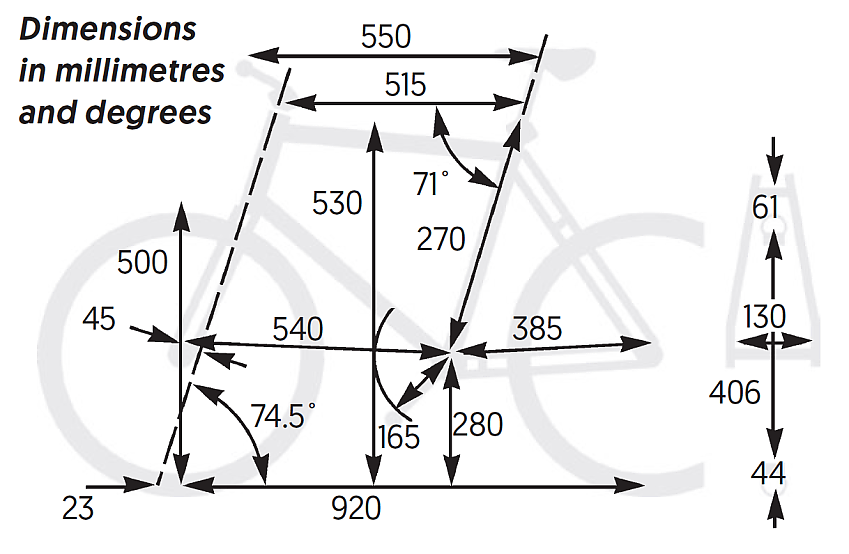 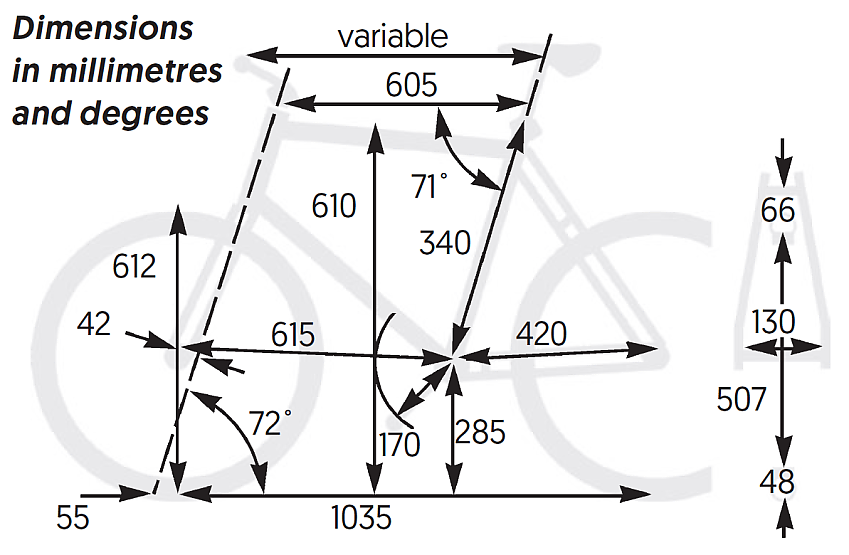