Two of Britain’s most respected purveyors of tourers have supplied this issue’s expedition bikes: Spa Cycles and Thorn. Both bikes are designed to carry you and your kit on extended tours over some of the worst road and non-road surfaces you’re likely to encounter.

The Spa Wayfarer and Thorn Nomad Mk3 are both made from chrome-moly steel, long the standard material for touring bikes, and have drop bars. While there is a major price difference, much of that is down to the Thorn’s Rohloff hub gear, which bumps the cost significantly. We’d hoped to test a cheaper, derailleur-equipped Nomad but that wasn’t possible due to a shortage of derailleurs when the test was commissioned. 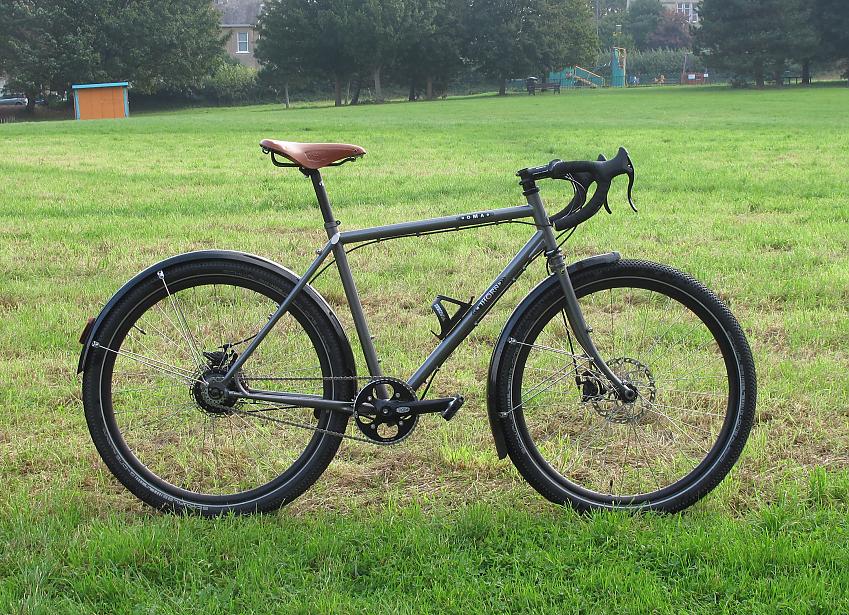 One area in which Spa and Thorn have broken with touring convention is braking: both have discs. Their cable-actuated TRPs may not have the all-out stopping power of hydraulic discs but I’d prefer mechanical discs in the back of beyond for their serviceability and their ability to survive freezing weather. And should your rims get bashed out of true, discs of any kind mean you'll still be able to brake safely.

Both bikes are available in a panoply of sizes and with numerous different kit and component options. Thorn’s Mk3 Nomad is also compatible with S&S couplings, a Gates belt drive, and a propstand, which I’ve found handy on loaded tourers. 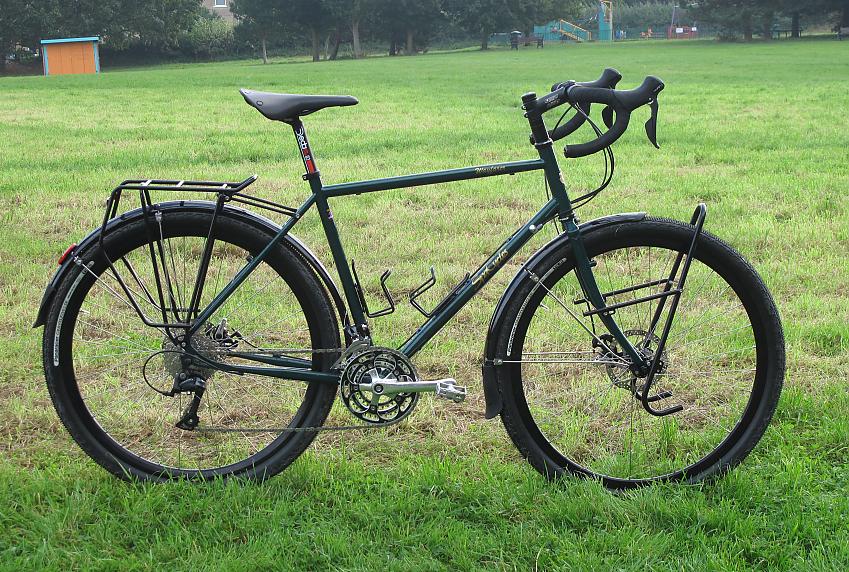 It’s steel, of course, for both the Spa and the Thorn. The numbers may be different – Reynolds 725 for the Spa and Thorn’s own 969 for its Nomad – but the steels themselves are much the same. Both are butted, heat-treated chrome-molybdenum steel, and both should last years if looked after, barring catastrophic crashes. Should that happen, steel is more readily repairable than aluminium, titanium or carbon fibre.

Both bikes are durably built, however. They’re neatly TIG-welded, with gussets under their down tubes where they join the head tubes. This stiffens the area and adds strength. The Nomad has Thorn’s new superbly industrial-looking Bikepacking Disc fork, which can accommodate 650B tyres up to 60mm wide. As Thorn say: “carrying an extra pound of steel in the frame is the most effective insurance you can have.” 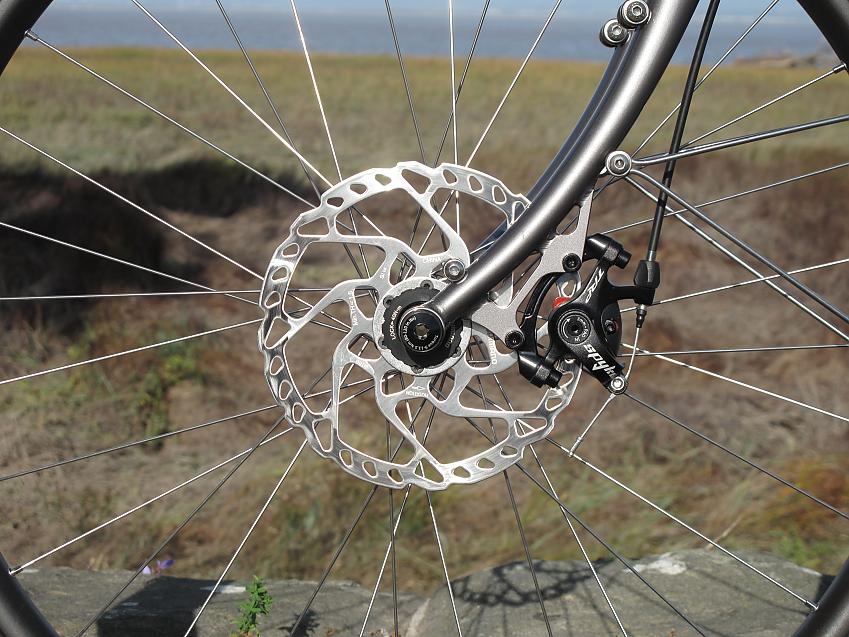 It’s a similar story throughout the frames, with the Thorn like a steel bike on steroids, which accounts for its 160kg (over 25 stone) maximum overall rider-and-luggage weight. In addition to having a more muscular-looking fork, all of the Thorn’s frame tubes are larger in diameter than the Spa’s, the main frame tubes by a few millimetres, the seatstays by a whopping 6mm or so.

This oversizing even extends to the Thorn’s rack mounts. With the exception of the lower rear boss, these are M6, which is too big to fit a standard Tubus strut unless you painstakingly enlarge the hole. It does mean you can carry heavier loads but I had to break out the P-clips from storage to fit a rack for the test. Thorn’s own racks are of course compatible. 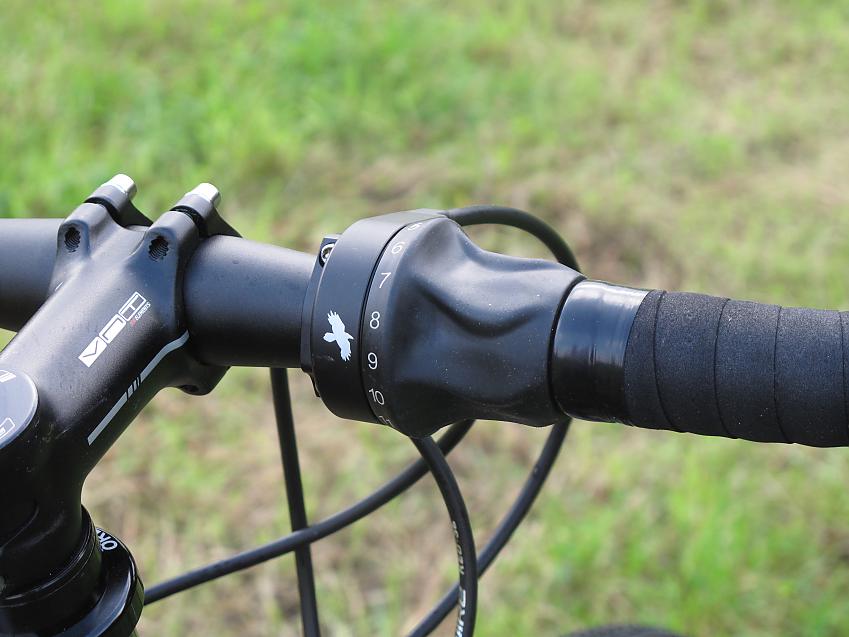 The shifter on the Thorn is neater here than on the end of the handlebar but there’s less space for lights, gadgets, etc

The most obvious difference between the two is the gearing. The Spa has nine-speed Sora with a triple chainset, giving 27 theoretical ratios. The Rohloff hub gear on Thorn’s Nomad only has 14 ratios but they’re sequential and there are no redundant gears.

The Spa’s gear range, with 50mm tyres, is 23-124in. You’re rarely going to need a 124in top gear on tour, and I’d go lower overall for loaded expeditioning. 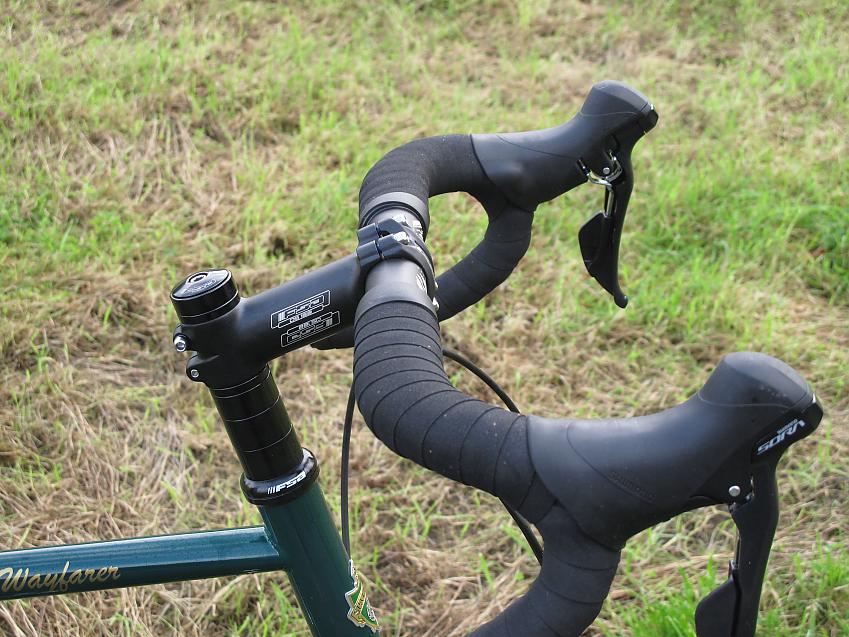 The Sora STI levers on the Spa Wayfarer give convenient shifting but somewhat limit lower gears. Smaller chainrings are an option – and Spa stock them

The Rohloff delivers a more expedition-like bottom gear of just under 20in. It’s worth emphasising, however, that both Spa and Thorn can specify the gears to your particular preferences.

Both gearings systems worked without issue, and I found I quickly got used to the Rohloff’s rotary shifter. You can change gear while stationary on the Thorn, as you can with other hub gear bikes, but the rotary shifter does eat into your handlebar real estate. If you run lights, GPS and a bell on the handlebar, you may have to adapt; I put a bell on the stem. The Spa’s FSA bar is my favourite shape for endurance riding, having ovalised tops. 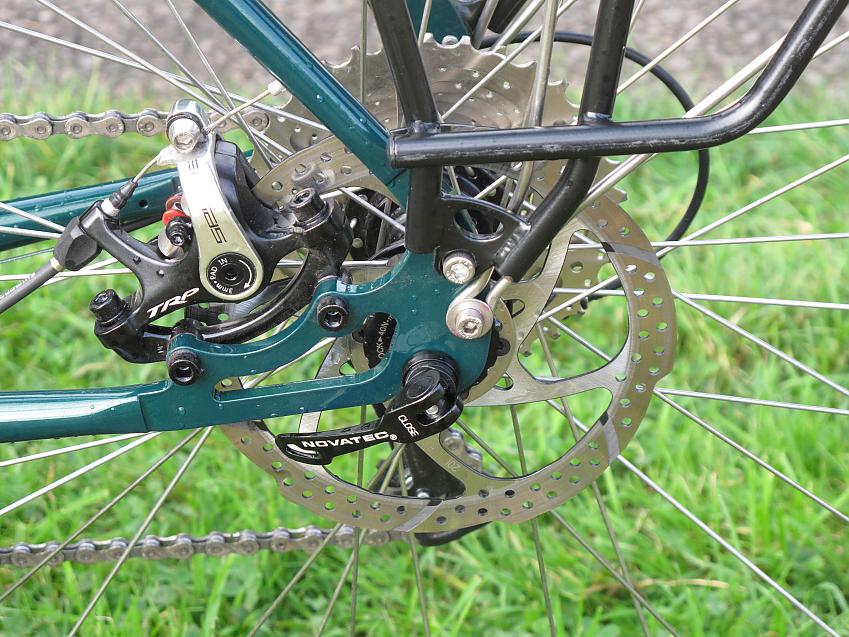 The brakes look the same at first glance. They’re cable-actuated discs from TRP with two moving pistons. The difference is that those on the Spa are the road version, Spyre, since the Wayfarer has Sora levers. The Thorn has the off-road version: Spyke. These callipers require linear-pull levers, which Thorn are free to use as the Nomad doesn’t employ brifters for gear shifting. Both setups offer consistent, controlled braking, with the Thorn having a bit more stopping power. As well as those linear-pull brakes, it has a larger (180mm) front rotor.

Both bikes have Brooks saddles – the Thorn a leather B17 and the Spa a more modern Cambium C17 with a nylon chassis. I feared the worst with the leather saddle, having never got on with them before. Yet while I preferred the firm-but-comfortable Cambium, the B17 was okay too. The honey colour sets off the Thorn’s gunmetal paintwork nicely too. 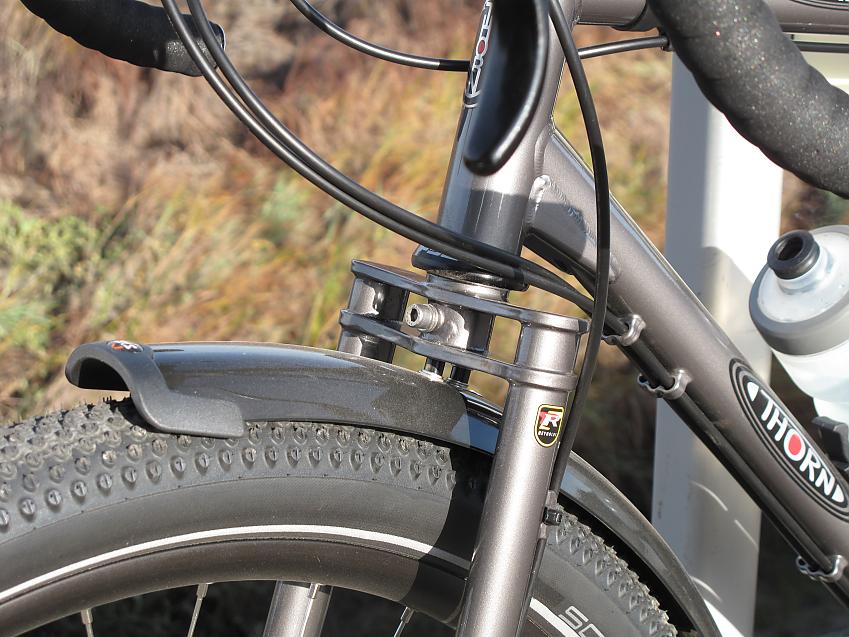 Differences in equipment are also evident in the bikes’ wheels. Our Thorn test bike has 650B (ISO 584) rims – although you can alternatively order the Nomad Mk3 with 26in or 700C wheels. The Spa Wayfarer has traditional 700C wheels. Both have gone big when it comes to tyres. The Spa has 50mm Panaracer GravelKing tyres, the biggest that will (just) squeeze under its mudguards. The Thorn has 57mm Schwalbe G-Ones, the widest tyres I’ve ridden.

The tyres have similar qualities. They each have small knobbles – the Schwalbe’s are round, the Panaracer’s square – that allow you to ride on tarmac without too much of your energy being wasted, while offering grip when the riding surface starts to break up. Both performed very well on hard-packed grit and gravel, canal towpaths, and unsurfaced Sustrans routes, and they were great over potholed roads and for dropping down kerbs. 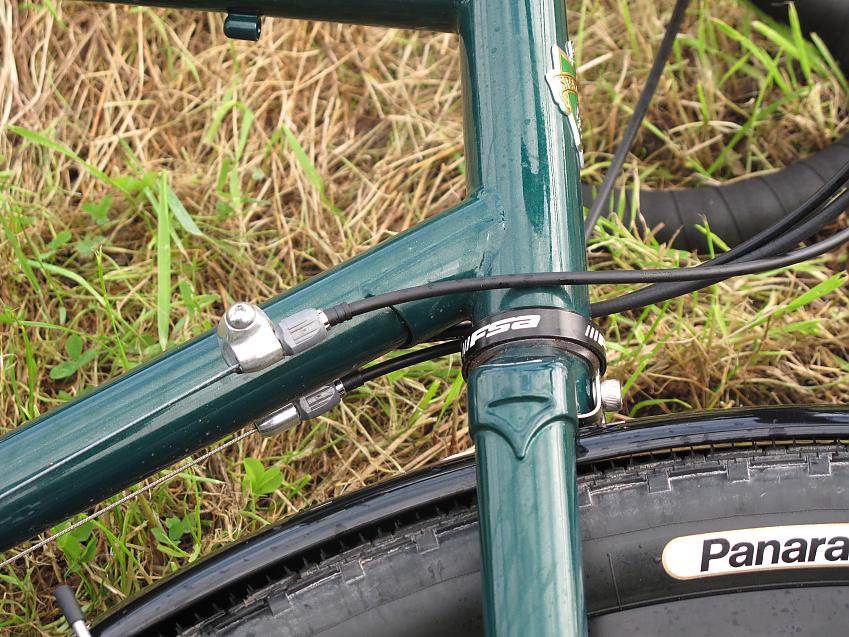 There’s no surprise that both Spa and Thorn have delivered very comfortable bikes – steel frames and the sort of super wide rubber that would have been unheard of a few years ago will do that. In spite of their differing wheels sizes, the rides of the two bikes have much in common.

Once the tyres are taken into account, the overall wheel diameters aren't radically different. Many of the geometry numbers are within a few millimetres of each other too. The Spa is taller at the front, made even more so by the spacers, but both bikes major on stability and comfort rather than speed. And both carry your kit ungrudgingly, like an Olympic weight lifter. 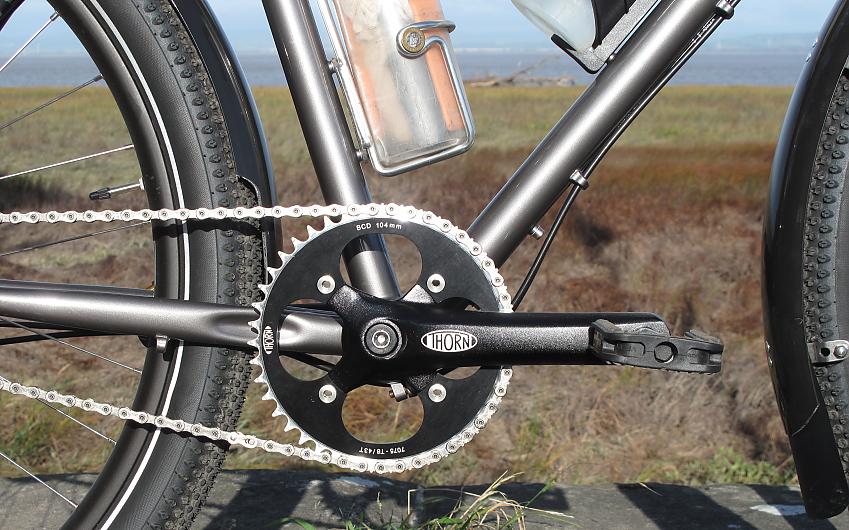 Thorn: When it wears, flip it round

I felt that I had to muscle the Thorn’s front end a bit more into corners, and that even with its massive tyres you could feel the extra stiffness imbued by the Thorn’s oversize tubes and front thru-axle. The payoff for that is that it could carry expedition loads heavier than any I’d be able to haul.

Conversely, the weight saving of the Spa over the Thorn will be more relevant the less luggage you're carrying. For unladen (or less laden) rough-stuff riding, for example, that could be an important factor. 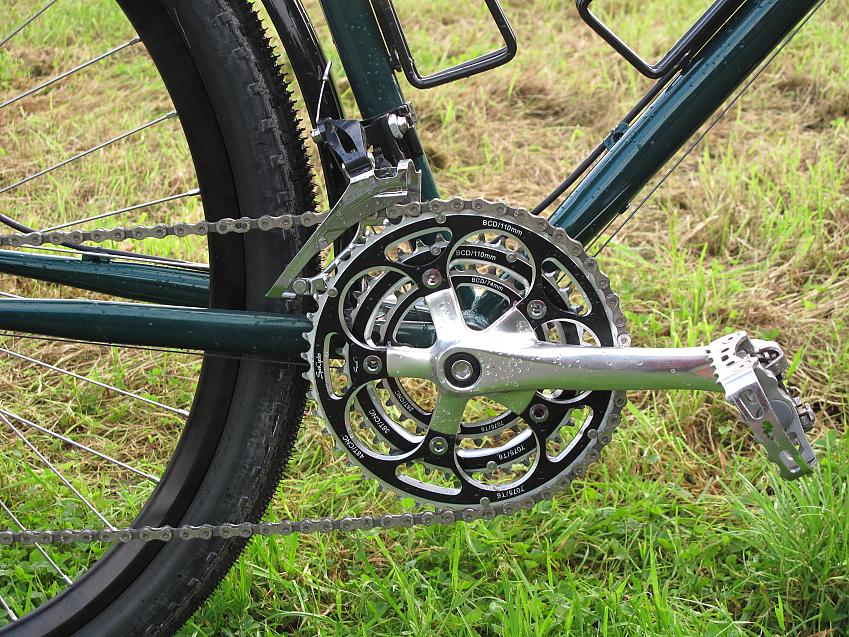 Either of these bikes would work well for taking a year off and seeing the world. If I was carrying camping gear and yomping over mountains on very poor roads, I’d probably pick the super tough Nomad, which lives up to its name. I’d go lower still with the gearing, and might pick tubeless tyres for more comfort, but that’s about it. The straight-through Rohloff gears are simple to use and are as tough-as, and the wider tyres on our test model suit dirt roads well.

For less heavy-duty expeditions, when I wasn’t carrying everything I own, I’d consider the Spa Wayfarer. Again, I’d like lower gears – and Spa do offer custom ratios as an option. The Wayfarer is a very comfortable, long-distance tourer that comes with quality hand built wheels, mudguards, and Tubus racks at an excellent price. With slimmer tyres and minus the front rack, it could also make a good commuter or audax bike. 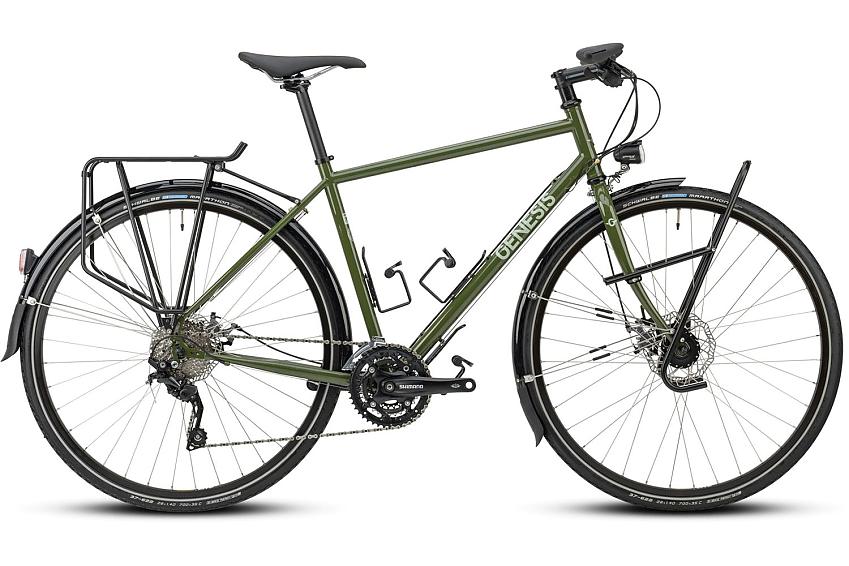 Flat-bar tourer with disc brakes, dynohub, a Reynolds 725 frame, and triple chainset gearing, this time based on Shimano’s 10-speed Deore. 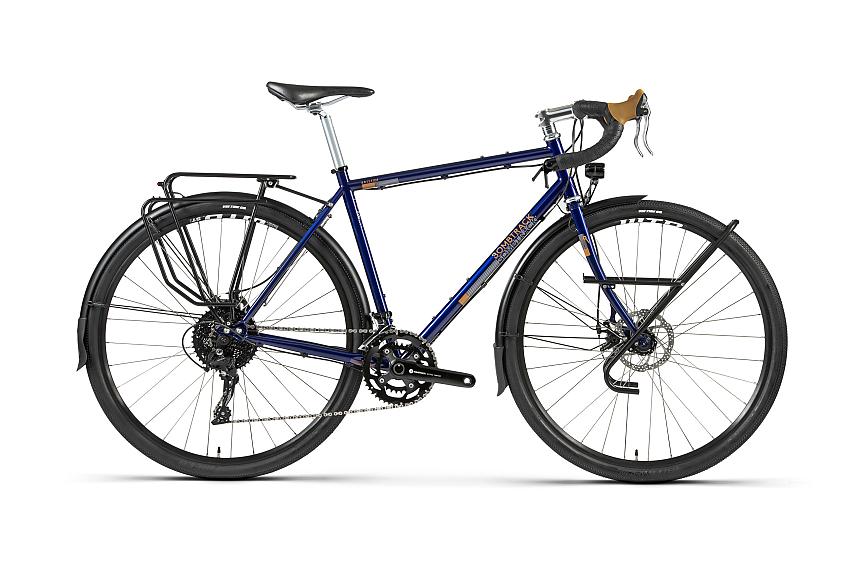 Bar-end shifters, a 46-30 chainset and a super-wide 11-42 cassette. Comes with Tubus racks and dynohub lighting. Reviewed in the Feb/ Mar 21 issue.

At Cycle and Cycling UK, we are proudly independent. There’s no pressure to please advertisers as we’re funded by your membership. Our product reviews aren’t press releases; they’re written by experienced cyclists after thorough testing. 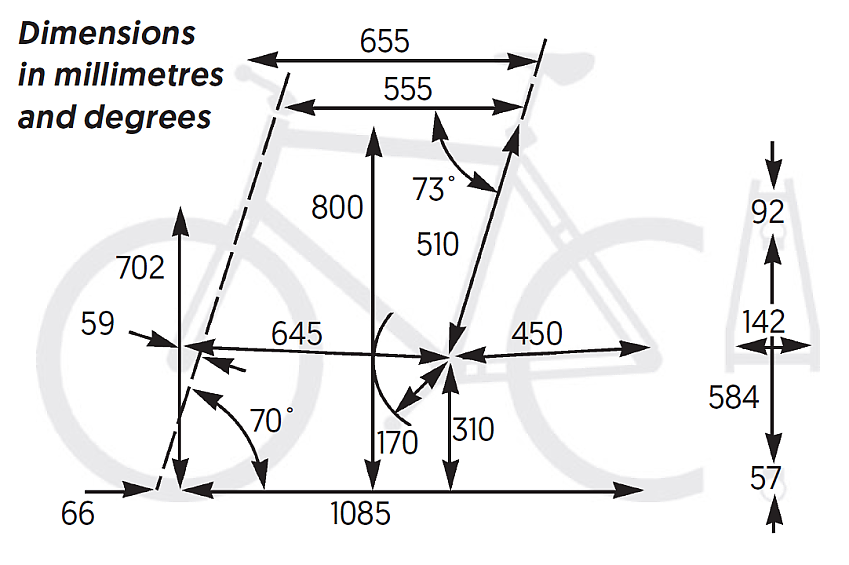 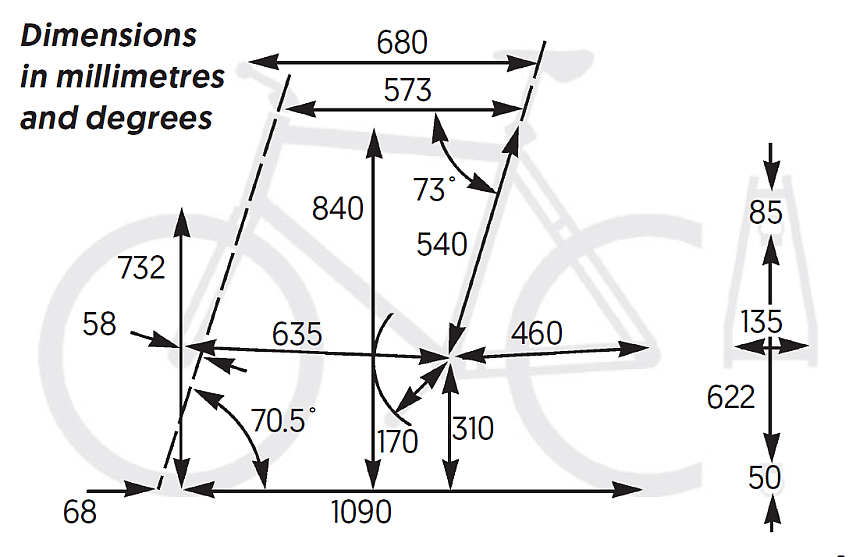 What bike should I buy? View