Better Streets for Kensington and Chelsea

Best known for its shops, cafés, and proximity to museums and galleries in one of the most upmarket boroughs in London, Kensington High Street became a key battleground in an active travel war in December. At stake was an experimental bike lane installed by the council to promote cycling during the pandemic, at a time when public transport capacity had been greatly reduced.

The first shots were fired by the Mail on Sunday when it published an article from Kensington resident, actor Nigel Havers. Under the headline “Disastrous, poorly-designed and EMPTY cycle lanes have resulted in gridlock every day – and
streets choked with fumes”, Havers moaned how his morning walk had been ruined by the smell of pollution. He was clear in his mind about the cause of the queue of traffic lined up nose-to-tail. The fault was entirely with the cycle lane that  had been installed to make travelling around the city safer during the coronavirus pandemic, he said.

In the face of a such a devastating broadside, the Royal Borough of Kensington and Chelsea quickly capitulated, raising the white flag with a promise to remove bollards without delay. In rolled the cavalry to defend the cycle lane, in the form of campaign group Better Streets for Kensington and Chelsea. BBC presenter Jeremy Vine also waded into the row on his trusty folding steed, sharing an interview on his Twitter feed with a mother and her young daughter who relied on the route to safely travel to school. But all to no avail.

A last-minute rear-guard action was mounted by a group of Extinction Rebellion protesters, who delayed contractors brought in to strip out the lane, but even that wasn’t enough. Motor traffic was given back the full width of the road. Road  workers even burned off the old white lines marking out the lane. Problem solved, as far as the council was concerned, although the battle continues to rage.

Kensington High Street might have snatched the headlines but it has been far from an isolated case. Councils up and down the country have been tearing out cycle lanes as fast as they’d been installed in the summer. The so-called bike lane
backlash – bikelash – had become infectious.

From Aberdeen to Brighton, lanes were being removed by councils responding in many cases with a knee-jerk reaction to a few disgruntled motorists and businesses without properly assessing the lanes’ effects. The Telegraph reported that around one in four councils have scrapped or reduced schemes since the government announced £2bn in active travel funding in the summer.

In almost every case, transport planners cited public opinion as the reason for acting so swiftly. In Kensington, for example, a press notice from the council explained its decision was because “businesses and residents expressed concerns  that the experimental scheme was not working.”

With local elections looming in May, it shouldn’t have come as a surprise that councillors were keen to follow public opinion. The problem was they don’t appear to have made any effort to gauge that opinion adequately, preferring instead to  listen to those who shouted loudest.

At least four surveys carried out throughout the year showed consistently that the majority of the public was in favour of more cycle lanes. In November, YouGov carried out a poll on behalf of Cycling UK which revealed that 61% of people agreed with the statement ‘we should make it easier for people to cycle by building more separated cycle lanes.’

Only 19% of people questioned disagreed. And when specifically asked about the emergency active travel measures funded by the government during the pandemic, 56% of people supported them, against 19% who were opposed.

The findings were mirrored by a similar survey carried out in July for #BikeIsBest, a partnership of leading cycling brands, retailers and organisations, which found 77% of people were in support of measures in their local area to encourage cycling and walking.

Another poll, carried out by Greenpeace in May, showed that 58% of people supported the introduction of cycle lanes on all main roads in urban areas in the UK.

So why such a rush to pull out these measures, costing taxpayers hundreds of thousands of pounds, if the general consensus is that they should stay? It may be that people were overestimating the level of opposition in the wider public. In  its November poll, Cycling UK found that while only 19% of people opposed the new active travel funded measures, they guessed that 29% of the public was opposed to them.

Dr Ian Walker, Environmental Psychologist at the University of Bath, said: “It’s possible the reason so many people overestimate other people’s opposition to these schemes is related to a psychological phenomenon called pluralistic ignorance. This is where the majority of people think something is bad but go along with it anyway because they don’t hear much objection from everybody else and so assume they are in the minority.”

And it could be that all the negative media headlines have played a part too. Dr Walker added: “There is another well-known cognitive issue called availability bias. This is where people assume that any idea that comes to mind easily must be important. Media reporting has long been known to make people suffer from this effect, such as when people worry about being attacked in the street, which happens rarely, but gets lots of media coverage when it does, more than they worry about being harmed by a motorist in the street, which happens regularly but gets little coverage.”

It’s all cold comfort for campaigners around the country frustrated by disappearing cycle lanes after complaints from a minority, without an assessment of the wider public view. In Shoreham, a cycle lane which has more than doubled cycling levels and even featured on a government video promoting cycling investment was, at the time of writing, under threat of being removed by West Sussex County Council. 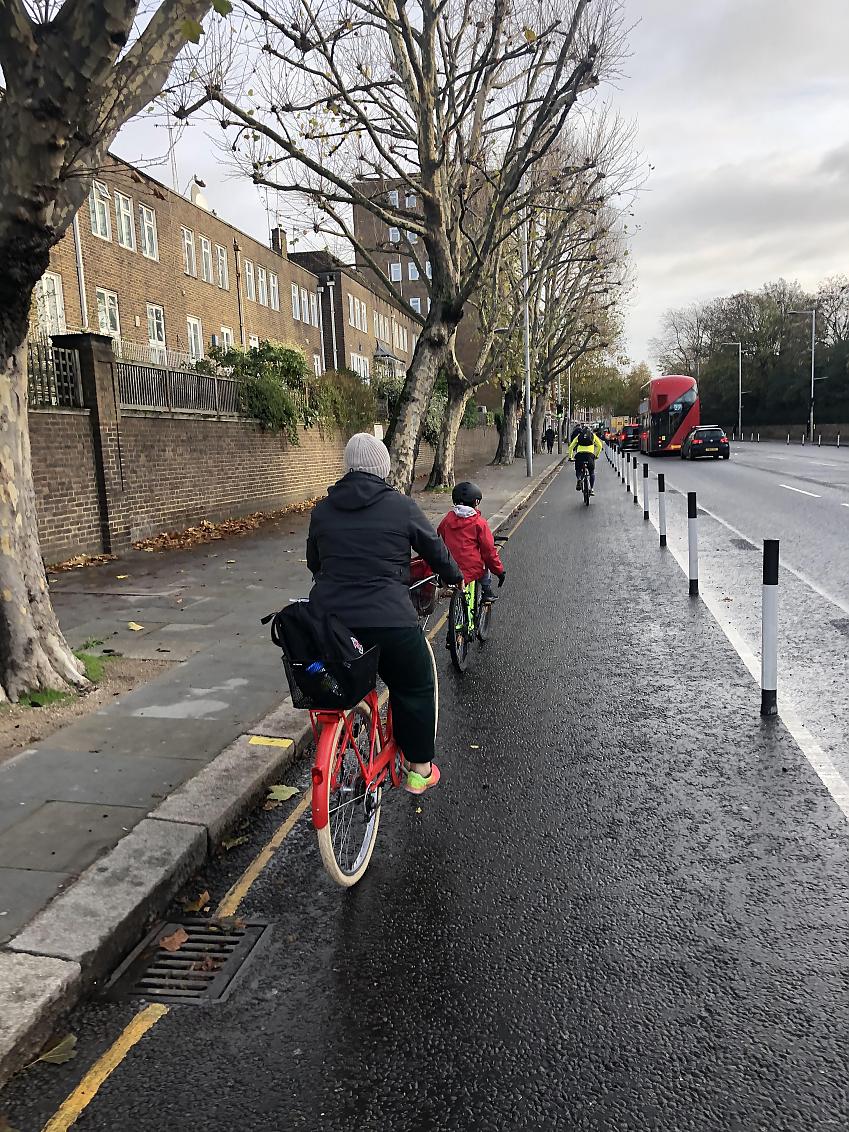 Clive Andrews, from the Shoreham-By-Cycle campaign group, said: “The installation of an Emergency Active Travel Fund scheme has made a dramatic difference to life in Shoreham-by-Sea. Upper Shoreham Road spans our whole town from east to west – connecting thousands of homes to destinations like schools, parks and shops.

“We’ve asked people what they think of the popup layout, and while there has been criticism of some design details, the undeniable theme has been positive. In particular, schoolchildren, parents and people new to cycling have seen a  previously inhospitable road made more welcoming for them.

“The tricky thing now is the evolution from short-term pop-up to long-term permanent scheme. West Sussex County Council has recognised the latent demand for safe cycling that’s been unleashed but the council intends to remove this scheme before it begins planning for a longer-term design.

“We argue that with so much real benefit brought to people’s lives right now, the pop-up scheme should stay for the time being, so the people of Shoreham don’t have to revert back to a hostile, sometimes frightening Upper Shoreham Road.”

In the lead-up to Christmas, Cycling UK, through its Cyclists’ Defence Fund, was seeking urgent legal advice over the ‘unreasonable’ removal of cycle lanes. Duncan Dollimore, Cycling UK’s head of campaigns, said: “Separated cycle lanes can carry more people in less space, and they reduce congestion. They’re good for local businesses, with people cycling and walking into town centres staying there longer and spending more money. And the evidence shows that if you build them, people will use them.

“But changing ingrained travel habits doesn’t always happen overnight, so when councils introduce temporary cycle lanes they need to leave them in place for long enough to carry out an effective trial. ‘Who shouts loudest’ should not be the basis of their evaluation. A proper assessment should happen before any drastic action is taken to scrap new bike lanes.” 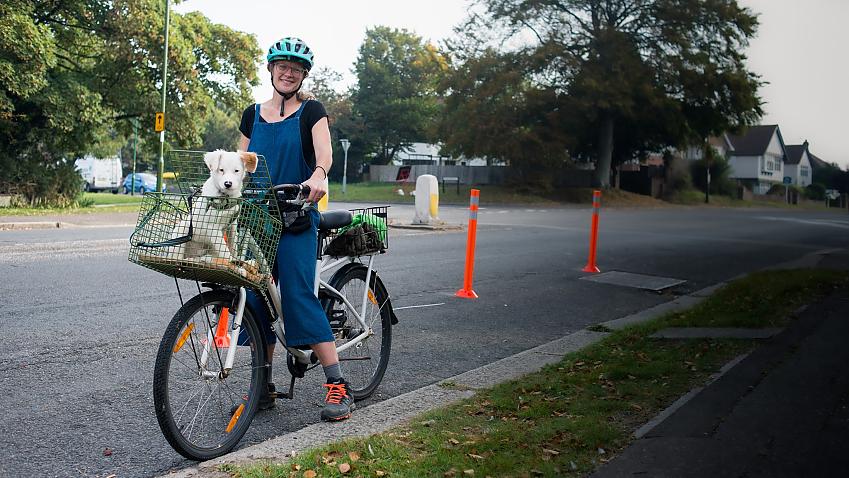 In the meantime, the best we can all do to counter the backlash to the bike lanes is to let our councils know how important they are for our safety and to encourage more people to leave their cars at home for those shorter journeys. Why not take part in our action and write to your council asking them to make cycling part of our recovery?

What you can do now

We urgently need more protected cycling space to enable people to leave their cars at home and choose to cycle or walk after the lockdown. Councils across England are being supported to do just that, with £175m available to help  authorities reallocate road space for cycling and walking. However, despite public support for such measures, we’re still seeing some newspapers and politicians blame cycle lanes for everything from pollution to the collapse of the high street.

You can help make sure a vocal minority don’t drown out the support for cycling and walking: write to your council and to your MP via our special campaigns action webpage. We’ve made it easy for you by drawing up a standard letter. All you need to do is add your name and address, then we’ll do the rest.