Barcelona by bike - a campaigner's guide

Barcelona by bike - a campaigner's guide

Cycling UK member and academic Robin Lovelace looks at the Catalonian city of Barcelona, the cycle paths of its urban centre, the scale of the city's bicycle rental scheme and provides an insight into what it's like to cycle there.

Barcelona is not a city traditionally associated with the bicycle. Yet thanks to investment in the 'Bicing' bicycle share scheme which began in 2007 - three years before the launch of London's equivalent - and associated bicycle infrastructure, this has begun to change. In 2011, Barcelona was rated as number 3 in the Copenhagenize chart of bicycle friendliness (this has since slipped) and bicycles are now a common sight in the city.

The rate of cycle uptake overall and the effectiveness the Bicing scheme specifically are open to debate. According to official statistics (the methodology of which is not transparent) bicycles accounted for only 1.5% of all trips in Barcelona in 2011 up from 1.4% in 2010 - around a 10% growth in a year. A third of the bicycle trips were recorded as being made by Bicing bicycles. In my experience the proportion is more like 1/5, but even that figure is impressive. However, the impact of the scheme overall is open for debate, as illustrated by an article questioning the cost effectiveness of the scheme and a presentation criticising the lack of evidence on the subject.

Despite this criticism, the Bicing scheme seemed to me to be a great symbol of official support of cycling as an accessible form of transport, and a flagship example of modal shift to sustainable transport in Spain overall. Indeed, it has been the springboard for a similar scheme in Seville, which has achieved "spectacular results" in a short space of time.

In the grand scheme of things, Barcelona's bicycle hire system is medium sized, comprising around 6,000 bicycles (compared with 11,500 in London and more than 20,000 in Paris) spread across over 420 parking bays (London has 750). The spatial distribution of these parking spaces is quite evenly spread across Barcelona's city centre, as can be seen in a real time bike availability map of the scheme. (To compare this distribution with that in other cities, please see Oliver O'Brien's amazing 'meta map' of bicycle share schemes worldwide). The scheme has a relatively high number of bicycles per docking station and appears to be in the top five largest rental schemes worldwide, according to data from a detailed study on the matter by Oliver O'Brien and others (see figure below).

As the debate about the effectiveness of such schemes rumbles on, and new datasets and analyses trickle out with frustrating slowness, this article takes an altogether more personal approach to cycling in Barcelona, based on three days of pleasant exploration of the city in early March 2014 (not a time associated with high bike use by any means), firstly by skateboard and then, after buying a secondhand bicycle, on two wheels. This, incidentally, was not easy as there is growing demand and not yet a strong secondhand market. Eventually I picked up a lovely Globe bicycle for €220 at a 'cash converter' style shop.

The resulting photos (the full set can be seen here) provide insight that words cannot, which means I will try to keep the description brief. So let's embark on this personal visual exploration of the city's emerging cycling culture. Vamanos!

One of the first cyclist-related things I noticed was the Bicing system itself. The docking bays are indeed huge, with dozens of neatly stashed bicycles ready to grab with just the swipe of a card. I did not actually try out the rental bicycles and apparently getting hold of a card to rent them is a bit of a hassle. But the bicycles seem practical and comfortable based on the large number of locals making use of the system (the photo below was taken before the morning rush). Beyond the impressive provision of bicycles, the Bicing project planners have clearly gone out of their way to create a space for cyclists across the city as well. The provision of lights with bicycle symbols in them is a good example of this, even though Barcelona's urban cyclists rarely seem to pay attention to traffic lights of any kind! 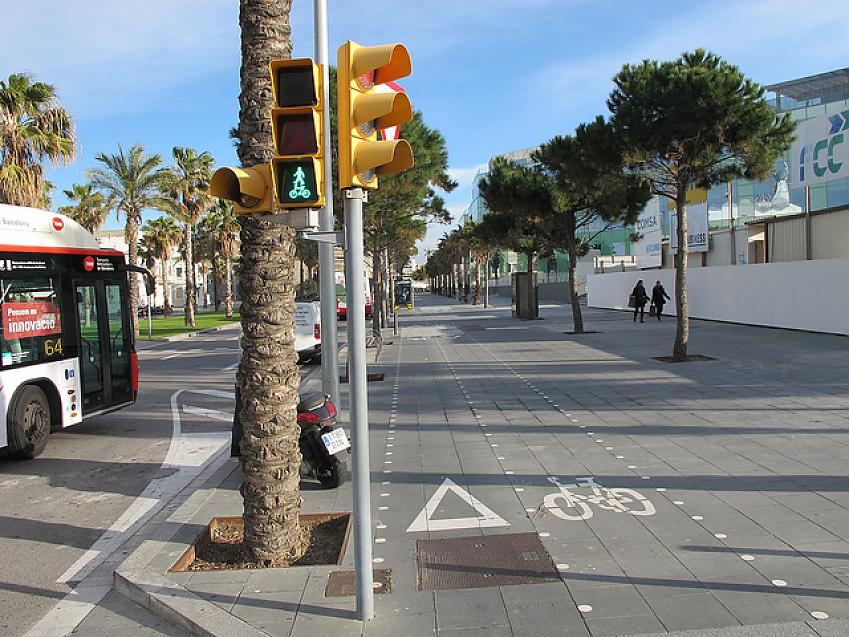 Another great thing about the Bicing scheme is the provision of normal bike parking spaces next to the docking stations, encouraging the use of 'normal' bikes alongside the rented ones. The contrast with Copenhagen, where cycling is highly regimented - and where anecdote and personal experience suggest you get hounded if you dare to stray onto the road! - could barely be greater. Bicycles are generally permitted to go where they please and the bicycle paths tend only to provide general guidance. The photo below is a good example of this: one can choose whether to go in the dedicated bike lane or, because the pavement is wide and relatively empty, can equally meander across the pedestrian zone. The fact that this is tolerated makes cycling in Barcelona feel liberating compared with other cities where one is corralled into small spaces. Perhaps this feeling is due more to the spacious layout of the city than good cycle infrastructure design: the streets are generally amply wide for pedestrians, cyclists and even cars to rub along quite nicely together. A high level of self-autonomy (red light jumping is the norm and cyclist roam freely on pavements or off) seems to be generally accepted, despite clear guidance on how cyclists must behave (see here for the official guidance on how to cycle in the city that I doubt many cyclists have read). This differs from London, where the politics of traffic lights and road etiquette seems to generate infinite debate and intrigue. In Barcelona's bicycle culture, I argue (based on admittedly sparse evidence), there is a tendency just to get on with where you are going without worrying too much about the underlying politics of mobility. Bike paths in Barcelona employ various techniques to separate the cyclist from motor traffic and pedestrians, ranging from painted paths, to small humps in the road to keep cars out of the bike lane, to large concrete barriers. The above photo captures the intermediate option well, with a typically relaxed Bicing user taking advantage of the safety of a physical barrier, even though they are only small (and inexpensive) blocks.

The separated lanes are truly separate and leave ample space for many people. The simple 'paint on road' option is by far the most common type of bicycle path. This is problematic for cyclists given the relaxed attitude of all road users towards the law, as illustrated by the lorry parked in one lane below, unfortunately a common scene in cities across the world. One of the most pleasant things about being a cyclist in Barcelona must be the coastal bicycle paths which are wide and extend far in both directions. I used the path for some of the way when I left the city, heading 100km northeast to Girona. Incidentally, while various people warned me about the 'Nacional' N11 road - the only reasonably fast option for most of this route - it was fine on a Sunday and the roads, as in other parts of the world, were faster and smoother than the cycleways. As in many cities, cyclists in Barcelona are primarily utility cyclists, simply using the bicycle as a vehicle to get from A to B. As in Holland, comfort is generally prized over speed. Protective clothing and helmets are comparatively rare (I estimate around a quarter of cyclists I saw in the city wore helmets) leading to the impression that cycling is an entirely normal and safe activity in the city. Also, I did not find the distinctive groups of cyclists in London that are the subject of much interest in the UK, neither road hardened, lycra-clad long distance commuters nor fixed gear fashionistas. I would not go so far as to say that cycling in Barcelona is a mundane activity. There are a number of bicycles on the streets which are clearly highly prized by their owners including Bromptons - seemingly a particular favourite with Barcelona's high flyers - but general purpose utility bicycles and mountain bikes are most common. There is no clear age division between cyclists and non cyclists although it does seem to be a mode favoured slightly more by the young, as in other cities. I encountered some interesting load carrying arrangements! The local authorities seem keen to continue to maintain and improve the bicycle infrastructure. One interesting plan is for a fleet of tricycles to be used to reduce congestion in and around the shops, currently being trialled by the authorities (as described on the Movilidad y Transporte website, in Catalan):

This idea is a great example of enlightened thinking from the local authorities, and demonstrates how cycles are not just viewed narrowly through the perspective of bicycle rental for short urban trips. The project demonstrates that cycling is seen more broadly as an integral part of the city's travel system.

I stayed in Barcelona in 2012 and was told that the Bicing hire scheme was not for tourists but only for residents!

Hi Phill, yes that coincides with my experience there: I didn't ask anyone but was presented with a pay station that demanded a special card in Catalan. Doubt many tourists have access to such a thing!

It seems strange that they actively discourage from using Bicing as it could be a little money spinner and tourists are commonly found in the centre without and bike and in need of fast transit - that's exactly why I resorted to buying a second hand bike, to be passed on to a worth owner soon. Only theory I can think of, if it was done deliberately, is that it may reduce metro revenues??? Still that theory does not really make sense either.