Kerr on his bike with his Mum

Four-year-old Kerr Gilbert, who has mild dyspraxia and had previously struggled to use a pedal bike has learned how to cycle, thanks to Play Together on Pedals.

Kerr's mother, Anita Crozier, has even been inspired to get the whole family pedalling. “Now that my wee boy is cycling, we are all going to buy bikes and get out as a family. I cannot believe how good the classes are, they are absolutely brilliant,” Anita adds.

Kerr had been using a balance bike for a couple of years but wasn’t too interested in pedalling. The four-year-old, from Newmilns, East Ayrshire, would previously take his trusty balance bike wherever he went. “We live on a country road, so he would go up and down that and played away quite happily,” says Kerr’s mother Anita.

Doctors had noted that Kerr would likely struggle with cycling due to low muscle tone in his legs. He previously had difficulties with cycling and coordination, and was never interested in his pedalling toys. Anita said: “This year, you can see a very big difference; he’s got the strength in his legs to pedal”.

It’s such a lovely and relaxed environment. The kids just enjoyed it, everybody looked like they were having a great time, and nobody was having a tantrum.

She got in touch with Play Together on Pedals to find out about their drop-ins, and they went along to a session at Kinning Park in Glasgow.

Kerr had a great time and had started to get the hang of pedalling with the help of the instructors. “It’s such a lovely and relaxed environment. The kids just enjoyed it, everybody looked like they were having a great time, and nobody was having a tantrum”.

Kerr managed to get his pedalling down to a fine art during the following session. “I absolutely love the drop-in sessions, it is fantastic that you can just pop down whenever you want. The instructors are super and the fact that all of the kids there are at the same level means that everybody can just have fun while learning without any competition.”

Now, you cannot keep the four-year-old off his bike. Since learning with Play Together on Pedals, Kerr’s family went straight out and got him a brand-new bike. He now regularly enjoys cycling, including trips to Kay Park in Kilmarnock. The park has a dedicated cycling area with road markings, some fun slopes and even a roundabout, ensuring hours of fun. 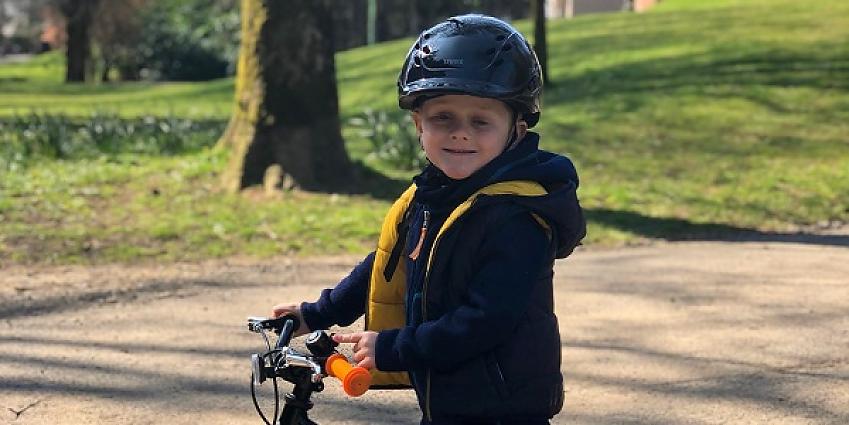 Since Kerr has learned how to cycle, Anita has been inspired to go out and get bikes for the whole family, so they can enjoy playing on pedals together.

Play Together on Pedals - a project led by Cycling UK, Cycling Scotland and Play Scotland, in partnership with other organisations - aims to get the whole family cycling. This all starts with helping little ones get pedalling.

Play Together on Pedals provides free early years ‘learn to ride’ sessions around Glasgow and Edinburgh. Their skilled instructors can help your little one with all manner of cycling obstacles. Whether it is improving their stability on a balance bike or to progress on to pedalling, their sessions are sure to help. All sessions are free to attend and all equipment is provided. Some sessions require a time slot.

Family cycling     Play Together on Pedals     Cycling UK in Scotland

Play Together on Pedals helps families get pedal ready! View