Janet back on her bike thanks to the Big Bike Revival
By Victoria Heywood
Wednesday, 31 January 2018

Janet Baird and her twin sister Margaret got bikes for their eleventh birthday, going on to pass their cycling proficiency tests together. Twins are very often incredibly close, and cycling quickly became an integral part of that special bond for Janet and Margaret. The sisters were the best of friends when they were on their bikes. It became a part of them, shaping their lives. They biked through their teens with unpredictable dynamo lamps, and then cycled through adulthood, often out on amazing charity rides.

Janet and Margaret experienced some great adventures. One was a coast-to-coast biking trip along the Reivers Way, a 173-mile route running from Whitehaven to Tynemouth meandering through beautiful English countryside. Then in the millennium year, they tackled a three countries all women’s charity challenge in the Middle East. This was an epic 250-mile bike ride across Israel, Jordan and Egypt. Cycling on local bikes made it all the more challenging but they successfully completed the course and raised money in aid of Queen Charlotte’s Hospital in London for research into women’s cancers.

Following this spell of success, the twins’ biking journey sadly went downhill. They lost their mum, had their pair of beloved B1 bikes stolen, and then Margaret developed a stress fracture in her leg after she’d completed the London Marathon. Tragically, she went on to develop serious complications and died in hospital in 2004. Janet was totally lost without her sister. The twins had been biking together for over 40 years. Even though their bikes had been replaced, Janet was so heartbroken, she couldn't even bring herself to look at hers. 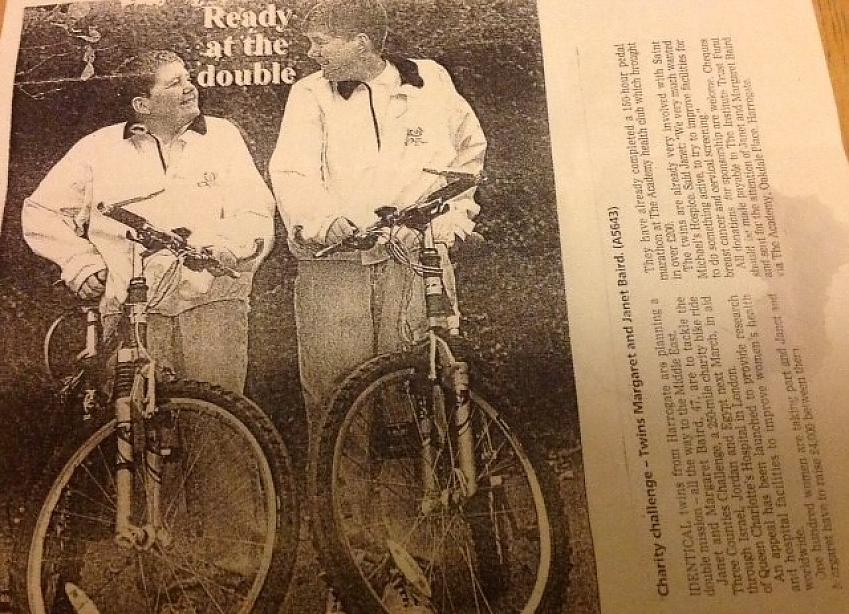 An old newspaper clipping of Janet and Margaret

Of course, Janet had lost a great more than just her cycling buddy; she had a lost her sister. She stopped cycling altogether and totally lost her confidence. In 2010 she felt ready to make a change, and got in touch with the Lone Twin Network. It’s a voluntary support group, run by and for lone twins over the age of 18 years old who have suffered the loss of their twin either at or around the time of birth, in childhood or during adulthood. Janet has been involved ever since that first contact and now runs the North-Eastern support group.

It has helped her very much, as Janet explained, “You don’t forget losing someone but I had started to feel better about things. So slowly I began to think about getting back on my bike, thinking I’ll try and see if I can get my confidence back.”

The founder of the Lone Twin Network had already suggested Janet should start cycling again. She did, but fell off, quite spectacularly, on an early morning ride and smashed her glasses! Unsurprisingly that put her off again for some time. Still Janet’s interest in getting back into the cycling world was recovering, and although she still wasn’t back on her bike, she volunteered as a Tour Maker for the Tour de France. Then she had another tentative go at venturing out on her bike, but fell off again after her bag got caught in the front wheel. Her bike was relegated to the downstairs cupboard. Janet thought her riding days were over.

It was a buzz of activity and I felt I was back in my own world.

Attending a Big Bike Revival event in Harrogate earlier this year changed her mind. Janet is a private tutor and one of her students, William, volunteers in the workshop at Resurrection Bikes in Harrogate. It was William who told Janet about one of the group’s Big Bike Revival events. He outlined how great it would be for her to go and suggested she should drop by with her bike, even for just a piece of cake. To Janet, this sounded wonderfully social and after finding out that Resurrection Bikes recondition old bikes and sell them to people in need, she committed. And that is what kick-started Janet’s cycling again.

“There were crowds of people there all happy and confident,” said Janet. “I got to know the project and felt so inspired by all the work Resurrection Bikes were doing. It was a buzz of activity and I felt I was back in my own world.” 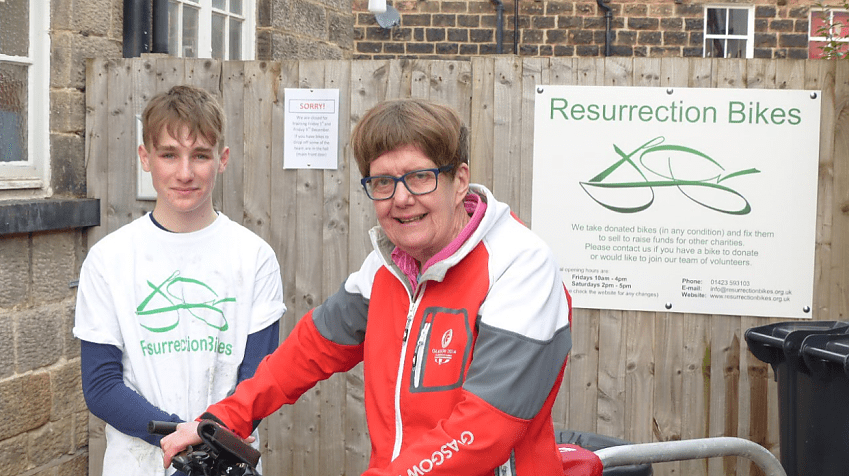 Janet is now finally back on her bike for the foreseeable. She cycles regularly but sticks to short local trips. Full of renewed enthusiasm, she sees cycling as being wonderful again.

She added, “It’s free and it doesn’t pollute. It’s a big bonus for everyone. It’s so good for our health. We should be encouraging more people to get out on their bikes and cycle more.