How sessions at Edinburgh ABC have helped Alex

Alex and Adam on the side-by-side
By DavidGlover
Tuesday, 3 May 2016

How sessions at Edinburgh ABC have helped Alex

Alex Cullis is a 19 year old who has been attending Edinburgh All-ability Bike Centre bike sessions regularly since October 2015. Alex has autism and learning disabilities but he has made great progress using the side-by-side trike.

Alex and his support team first became aware of the Edinburgh ABC project and the opportunity to try cycling when the Thistle Foundation hosted a 'try the bikes' sessions at their base in Craigmillar, Edinburgh. Although initially anxious about this new experience, Alex's personal assistants were very pleased that he was able to get on and try the side-by-side for a few minutes.

Alex has limited verbal communication. His support staff said, “If Alex doesn’t want to do something, or isn’t happy then you definitely know about it." So his positive acceptance of the adaptive bikes was a great sign and something to be pursued. He now attends once a week on a Tuesday afternoon.

Alex uses a bundle of flyers as a 'comfort object'. A comfort object can be defined as 'an item used to provide psychological comfort, especially in unusual or unique situations'. Alex clutches tightly to his bundle of flyers in new situations that can be worrying for him. After a couple of sessions coming to the Edinburgh ABC, Alex is now happy to tuck his flyers away inside his coat and use both hands on the bars when cycling. Adam, one of Alex’s personal assistants, was very impressed, “Sometimes he will hold onto the flyers all day, refusing to let them go at all. So for him to be happy to put them away so quickly is great. It really lets us know he is happy on the bike.”

It’s great to see the smile on Alex's face now when he arrives. He knows exactly what he is doing and always appears keen to get going on the bikes as soon as possible.

From the initial five-minute ride along on the side-by-side at the Thistle Foundation, Alex has progressed rapidly as his confidence and familiarity with the sessions has grown. Alex will now attend for between 30 minutes to a full hour. Alex’s support staff commented, “It’s been quite difficult to find things that Alex enjoys doing, he will often only stay at an activity we try for a few minutes and will refuse to return. For him to be on the bike for almost an hour is great."

By using the fixed/freewheel feature on the side-by-side bike, it has been possible for Alex to learn the essential skill of actively pedalling the bike with his support staff. Alex started out attending the sessions as a happy passenger of the bike, all the work being done by his personal assistants. However, over time and using the fixed-wheel setting on the bike, Alex was helped to learn how to move his feet in a circle. By alternating between the fixed and freewheel setting and giving lots of positive encouragement, over time Alex has been putting more and more consistent pedalling efforts in when using the side-by-side. Alex is now able to pedal the bike alongside his support staff to make the bike move rapidly around the skills area at Edinburgh ABC. Alex seems to enjoy going fast. 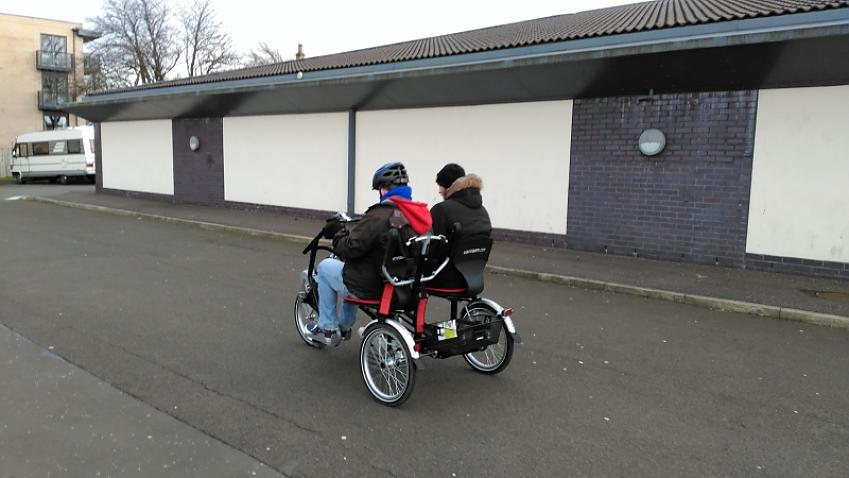 As Alex continues to come to Edinburgh ABC to use the bikes, his support staff are looking forward to the opportunity to explore the cycle network around the Edinburgh ABC base at Bangholm Outdoor Centre - once the access gate is widened to allow the large side-by-side to get through to directly access the traffic-free network.

David Glover said: “I am very pleased with the way that Alex has learned to pedal. I am hopeful that over time he will also be able to learn other skills such as steering and stopping and so be able to use one of the trikes or bikes entirely on his own.”

Phil and Sarah (Alex’s parents) said, “We are pleased that Alex appears greatly to enjoy his time at the centre and are also happy that Alex's time has helped him to develop his skills, capabilities and  confidence. Alex's carers and ourselves have found it quite difficult to find meaningful activities that are suitable for Alex and that really engage his attention and help to develop his skills. However, we feel really lucky that Alex gets to visit Edinburgh ABC on a Tuesday, as it is one of the activities that really helps to provide focus for his week."

Phil added, “Even though neither Sarah nor I have visited the centre, we can tell from the videos and photos shown to us by his carers that he is having a great time. We are really grateful to you and your colleagues for the help and support that you give to Alex."

Cycling UK and FABB (Facilitating Access Breaking Barriers) Scotland - a national youth organisation working mainly with young people with disabilities - have received funding from Transport Scotland to introduce cycling to hundreds of people, whatever their age or ability, using Edinburgh’s traffic-free cycle network. The project, called Edinburgh ABC (All-ability Bike Centre), will give many people their first taste of independent mobility. The funding enables Cycling UK to employ a part-time development officer to deliver an inclusive programme of cycling activities and builds on the success of FABB’s 'Blazing Saddles’ cycling project for people with disabilities, thus changing lives in varied and positive ways. This will be done by purchasing a range of adaptive bikes and with support, guidance and advice from FABB Scotland/Blazing Saddles and City of Edinburgh Council.

Edinburgh ABC, based at City of Edinburgh Council’s Bangholm Outdoor Centre, will reach out to organisations and communities that may like to take part in the project, enabling a wide range of people to participate, specifically but not exclusively:

For more information about the project, including how to participate or become a volunteer please contact: David Glover, Edinburgh ABC Development Officer. Email: david.glover@cyclinguk.org or call 07500 069357.