Five years ago Suzanne Forup took on the role of Head of Development Scotland at Cycling UK with a team of four. Now with a team of 34 and running projects reaching tens of thousands of people, she looks at how our work in Scotland has developed and what she's learned along the way.

Five years ago, I walked out of the door of Youth Scotland, where I had worked for seven years as part of the senior management team, and into an uncertain mix of joy, hope and fear as an almost full-time member of CTC staff.

Part of my role at Youth Scotland was to manage 'Bike Club' – a partnership project with CTC – so I'd already been managing CTC projects and staff for five years. I'd also been employed by CTC on a very part-time basis for two of those and brought in over £400,000 of funding for projects already, so it wasn’t a leap into the unknown. But leaving the security of my grown-up job in a national charity to follow my passion for the transformational power of cycling in a ‘self-funding’ role felt like risk, and worse because it was at my own request.

Thankfully there was no calm settling in period with time to worry about where the next round of funding would come from. I already had established projects that needed my attention and a new programme to support. In addition, there was a Holyrood election looming and alongside my campaigner comrade Sally Hinchcliffe, my spare time was consumed by co-ordinating the WalkCycleVote collaboration.

Ride the highs and learn from the lows

The real roller coaster ride started after I gate-crashed an event at the start of 2016 and had the conversation that led a few months later to the first Big Bike Revival Scotland funding award from Transport Scotland. Timelines were tight but in September of 2016 I had seven new colleagues around me for our Ministerial launch in Stirling. That first whirlwind of activity, funding over 500 community cycling events in a six week period across Scotland, set the pace and we have not stopped since.

There have been plenty of highs in the last five years, as well as some difficult times. Every successful funding bid brings a combination of excitement, hard work and pressure, just as a rejection brings sadness and frustration. We have learned to diversify our income, anticipate opportunities, celebrate success and reflect on our failures to consolidate confidence and build resilience.

As a development team we have spent the last few years trialling and testing different approaches – loaning cycles to people with long-term health conditions, bringing walking into our programmes, delivering projects in rural communities and working with families as well as pre-school children.

Investing in a research and evaluation manager post enabled us to better assess what impact we were making, unpacking the complicated interactions that create behaviour change and show that our work reduced health inequalities and enabled people to cycle that wouldn't otherwise consider it.

I'm privileged to work with a team that go the extra mile as standard, are completely committed to what we do and live our mission. I'm regularly awestruck by our evaluation results, and it’s been a delight to see colleagues flourish as they have taken on challenges, expanded their networks and enabled us to reach communities that thought cycling wasn’t for them.

Just last night I watched my colleague Julie Cunningham deliver an online seminar like she regularly hosted a television show, but when I met Julie for the first time in 2016 as a Belles on Bikes volunteer leader she was hesitant to even speak in a group. 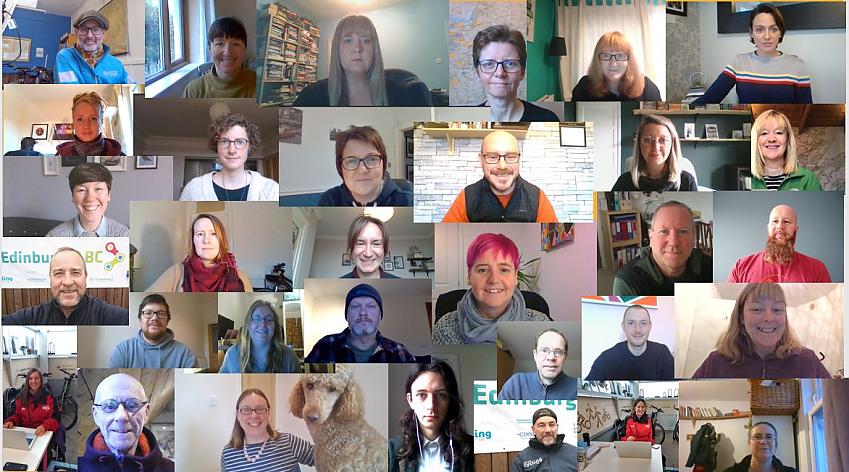 Team Scotland hard at work at their desks across the country

I'm particularly proud of the Bothy programme – initiated, developed and managed by my colleague Shona Morris – as it's an outstanding example of what we've been able to achieve when given the most slender opportunity. With just £10,000 Shona turned an idea (simmered in her own time as a volunteer) into our first Bothy, enabling people in Inverclyde to walk and cycle for everyday journeys, health and leisure.

Looking back through our diaries we realised it's just three years since we first discussed the Bothy and between that conversation and now, Shona has secured £500,000 to develop the Bothy idea into a network of five linked projects that are unique to their location but all with local communities at their heart.

This year has been like no other and we've adapted so that we can deliver what's needed by individuals and communities. Amidst the uncertainty and upheaval of lockdown we developed and delivered the largest project we've managed in Scotland so far, enabling tens of thousands of people across the country to get their cycle fixed through the £1.5m Scotland Cycle Repair Scheme.

The Power of partnership

Partnership is central to all of our work in Scotland, with our participants and the communities we work in as well as the hundreds of organisations we collaborate with and support each year.

The Play Together on Pedals partnership has bought consistent joy since I asked two of my favourite people in the cycling sector to discuss a last minute People's Postcode Lottery Dream Fund application; it was wonderful to see that continued and expanded work highlighted in the Active Nation Commissioner report this week.

The doubling of the Scottish Government's active travel budget in September 2017 bought us together in a strategic partnership – now called the Active Travel Delivery Partners (ATDP) – with six other organisations. The ATDP Directors have all been a great resource for learning and inspiration, but I'd particularly like to thank John Lauder and Keith Irving for their support, time and wise counsel when I've needed it. 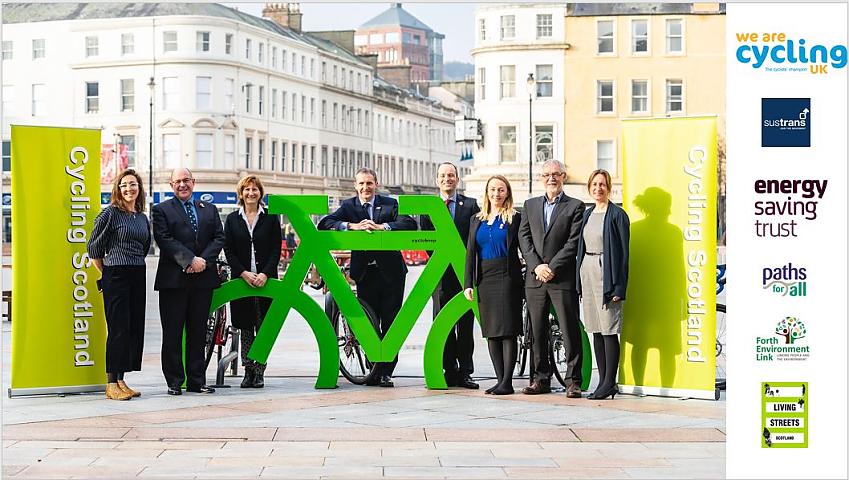 The Active Travel Delivery Partnership Director group with the Cabinet Secretary for Transport, Infrastructure and Connectivity (minus Stuart Hay of Living Streets Scotland)

What you can’t see in the ATDP photo is the civil servant behind me, holding the pop-up banner and ensuring it doesn’t crash down on our heads, which I think is a good metaphor for the often invisible work of our colleagues in the sustainable and active travel team at Transport Scotland.

They go unacknowledged and have the (often thankless) task of turning policy into reality through legislation and funding investment; without their support and belief in the equalities agenda that powers Cycling UK in Scotland we would not be able to do the work that we know transforms lives.

The doubling of the active travel budget was also a campaign milestone, which we celebrated as the WalkCycleVote collective, by presenting the (then) Minister for Transport with a cake – a slab of ‘rocky road’ to represent the remaining challenges – reaffirming that working in partnership with shared goals and the right amount of compromise means we are more than the sum of our parts. 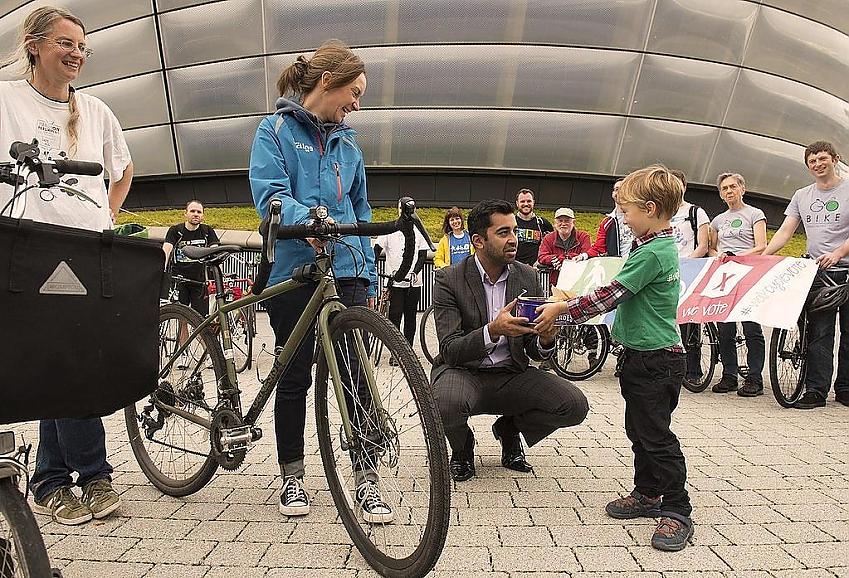 The WalkCycleVote partners present a cake to the Minister for Transport to celebrate the doubling of the active travel budget. Photo: Iona Shepherd

Embrace change and be human

We’re not the only thing that has changed over the last five years; the Cycling Scotland conference has moved from a celebration of the male, pale and stale to a diverse and inclusive opportunity to bring the global cycling stage to Scotland. ‘Wheeling’ has entered our vocabulary, along with the understanding that disabled people must be included in all conversations about our streets.

Scotland’s first active nation commissioner, Lee Craigie, brings a fresh approach to everyday journeys as she challenges us all to keep active. Our colleagues at Sustrans Scotland have not just grown in number but their work with local authorities and public agencies to improve infrastructure for walking, cycling and wheeling can now been seen across Scotland.

I feel I've learned a lot over the last few years about people, through success and failure, building on the solid foundation created in my years as a front-line community development worker. I've found that being human is part of what makes a leader and I've learned about the power of kindness and the strength of empathy.

Small actions can make a difference – my CEO reaching out by phone last year, in one of the most difficult times for my team, left a lasting and positive impact on how I felt about a situation. The everyday pleasure of talking to our finance manager makes me feel connected to the wider organisation and the boundless enthusiam of my manager lifts my spirits.

It takes a village

The most profound change I've experienced has been the journey to understanding more about what 'inclusive streets' means for other people through the WalkCycleVote work of the last two years with RNIB Scotland and Spinal Injuries Scotland. I'd like to offer my most sincere thanks to Catriona Burness at RNIB Scotland and Maureen Morrison at SIS, and their volunteers, for their patience and understanding as I learned slowly what should have always been obvious about the privileges I have.

I've been fortunate since the start of my journey with CTC to have the support of the Scotland committee, even when I pointed out to them that they needed to change, and I owe a debt of gratitude for the gracious way that they accepted me around the committee table even when they probably didn't like some of the things I said.

My comrades at Youth Scotland supported me even after I had left, welcoming me back to Balfour House on a regular basis in those first few months when I felt so alone and didn't throw me out when I stole their fantastic communications manager a few months later.

I'm surrounded by wonderful colleagues who have all touched and influenced me over the years and they are too many to name. But through the highs and lows I've been supported with wise words, cycling adventures and wine by a brilliant group of women in my working life and it would be remiss not to mention them – Katie Walter, Sally Hinchcliffe, Daisy Narayanan, Shona Morris, Emily Ryder, Lizzie Reather, Claire Connachan. They are my superpower.

When you have a job that you love it can feel like you aren't at work at all, but the flip side is that you can also feel like you are always at work. My husband has borne the burden created by my passion for my work, and I can only thank him for enabling me to give the best that I have to this job that I love. It was he that insisted in early 2015 that I had to choose one job, recognising the unsustainable workload I was shouldering, and so in many ways he is reason for the start of this journey.

Five years ago we were a perfectly formed team of four in Scotland, with a budget of around £200,000. Today we are 34 strong and we have brought in around £2.5m for our projects and programmes this year.

In the last year we have finally increased our policy and campaign capacity in the form of our colleague Jim, ensuring that we are able to respond effectively and consistently to the changing policy landscape.

In these uncertain times we can't really state with any confidence what will happen in five weeks time, let alone another five years. But, echoing the recent words of our First Minister, I know that if we are strong, kind and continue to act out of love and solidarity we will can't go too far wrong in our mission to enable millions more people to cycle.