“You’re doing what?” is a question I’ve heard a lot recently from my colleagues followed by “why on earth are you doing it?” and usually “trouble at home?”

These aren’t entirely unreasonable questions - well, apart from the last! I suppose most people’s first actions when the mercury drops and snow is promised isn’t to begin planning a bike ride followed by an overnight in a bivy.

However, that’s usually my first thought but until last night I hadn’t actually followed through on such plans.

That’s not for want of trying.

Last year when the Beast of the East swept through the Surrey Hills which Cycling UK’s office sits close to, my bike was packed and as soon as work was done, I was out on the trails blasting through the snow drifts and having a whale of a time. As you’d imagine, you work a lot harder when it snows, particularly when your front wheel is pointed uphill, which means no matter how cold it is, you begin to sweat.

Sweat when it’s cold can be very dangerous. When you stop riding for even a brief period time, that wet layer on your back will rapidly chill, sapping any warmth your body has managed to generate.

If you’re then planning to camp out, and have no dry clothes to change into then it’s a recipe for hypothermia and potentially a sad story in local news outlets. On this ride, given it was just one night out I’d not thought to bring spare clothing, and despite trying to dry out in a pub, had to admit defeat and roll back home.

“Experience is simply the name we give our mistakes” Oscar Wilde famously wrote, and as the snow crunched beneath my wheels, I was already learning from my 'experience' and plotting my next venture out - this time I’d make sure to pack the right gear!

Unfortunately, since that evening, I’ve had to wait close to a year. Last night finally I put those lessons from the past into practice, and had a super night.

All of which still doesn’t answer the  'why' behind such an activity.

My answer has been two fold to my colleagues and long suffering partner, Daria.

Firstly, I’d made a vague New Year’s resolution to try and spend one night outdoors for each month of the year. Last year in February, I’d read that there was a challenge where people aimed to do this, and it appealed immensely. However, given the year was already begun and I’d missed out on January, I just didn’t do it, and filed it away at the back of my mind as something nice to do in 2019 if I remember.

When the threat of snow and cold became real down south in Surrey, the idea re-emerged, as did my realisation I had only one night left of January if I wanted to take up the gauntlet for 2019 and not wait until 2020…which could well turn into waiting for 2021, 2022… 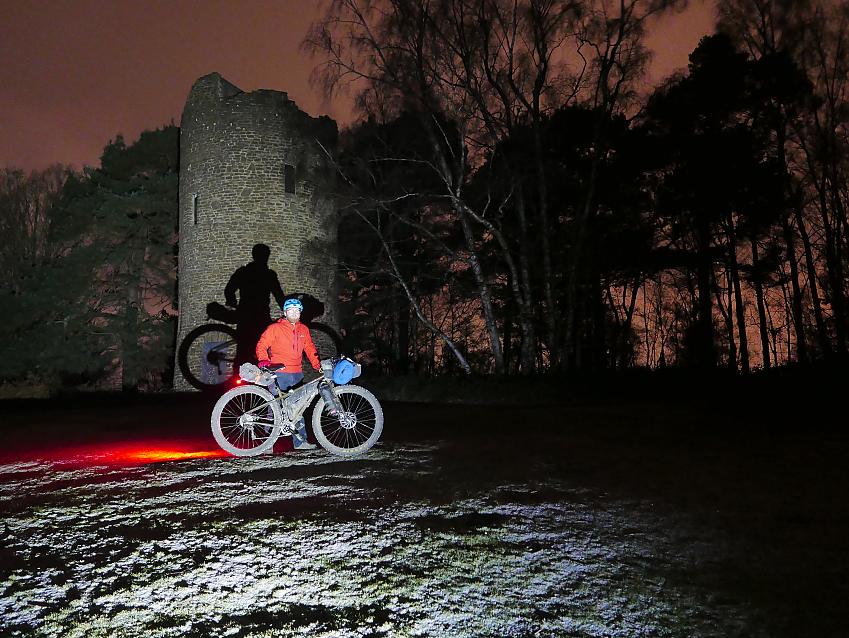 And secondly, I like sleeping out when it’s cold and snow’s settled, which I know puts me in the minority.

Perhaps the appeal comes from being born in one of Wisconsin’s coldest winters (pre-Polar Vortexes that is) and hearing of how the doctor had to visit my mother at home on skis making me think it’s in my blood.

More likely though is that it stems from growing up on tales of Arctic and Antarctic explorers, like Shackleton, Apsley Cherry-Garrard, Nansen and Amundsen. It’s the challenge which springs from such micro-adventures that excites and sustains me, and to a certain extent keeps me on the level.

In the past, I’ve satisfied this desire by heading out on foot, with one memorable trip being along the South Downs Way in January 2013 when the whole of the south seemed to be frozen for a week. My friends and I had a trail of virgin snow all to ourselves for three days, it was bliss.

Recently, I’ve discovered the joys of mountain biking, and suddenly mid-week adventures into the heart of the countryside becomes more possible. Cycling allows you to reconnect to the world, and for me I find cycling off-road a particularly enriching experience.

I’m not alone in this, as there are numerous studies about the benefits riding a bike and spending time outdoors have for your wellbeing. Cycling UK’s own Rides of Way report showed that 91% of people rate their off-road riding as very important for their mental health.

In Scotland, mountain biking is even being used as part of a programme of therapy for people currently experiencing mental ill health.

Developing MTB in Scotland (in partnership with Scottish Borders Health and Social Care Partnership’s, Galashiels Resource Centre and Edinburgh Napier University) over a six-week period took people out mountain biking in the fabulous landscape of the Scottish borders. This was an innovative pilot programme, which as you can see from this short film has great potential.

While I’m fortunate to be blessed with good health in all its aspects at the moment, I do from time to time need that sense of peace which only the wild can bring. Combining my love for cycling with a love for the outdoors and more specifically the delight of spending a night out in it feels like a natural fit for me, particularly if I can squeeze it into a school night.

After a good ride, I usually sleep well, particularly if its outdoors. I find I’m more relaxed and perhaps more importantly, that desire for exploration is satisfied…if only for a little while. Now I no longer live in a city, the only thing holding me back from heading outdoors for the evening is simple day-to-day routine (and rain – I’m not a fan of bivying in the rain).

So last night, I headed out into the hills as the flakes gently drifted down and covered Surrey in that soft silence that snow wraps the world in. 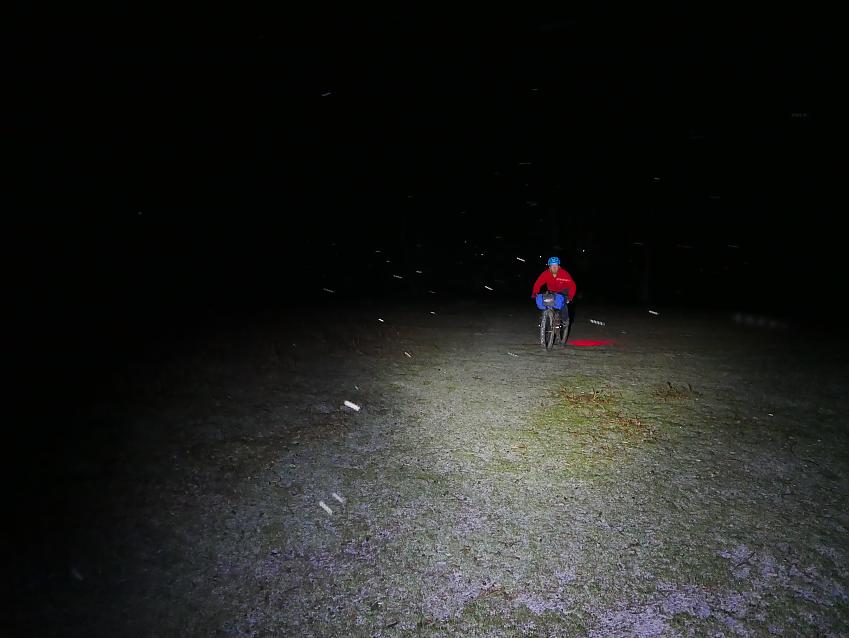 Sam riding as the snow begins to fall and settle. Photo Sam Jones

There's a beauty in night riding, (read this eloquently written piece by my colleague Julie Rand if you've not tried it before), and in the snow this beauty becomes simply magical.

Plumes of steam accompanied me as I pressed up the steep inclines towards St Martha's. The undergrowth rustled, and then two deer stepped through the spotlight and all the while my wheels spun through the white crust leaving a solitary trail. There was no trace by the time rosy fingered dawn touched the Surrey Hills.

Zipping down a piece of singletrack off Blackheath, I rolled into Wonersh where I stopped for a fortifying evening meal. If there's one way to avoid the cold when sleeping out, it's to make sure you go to bed with a full belly. A beef stroganoff and sticky toffee pudding later, I began the climb to the summit of Chinthurst Hill and was soon setting up my room for the night beneath a conveniently placed pine that kept both the wind and snow at bay. 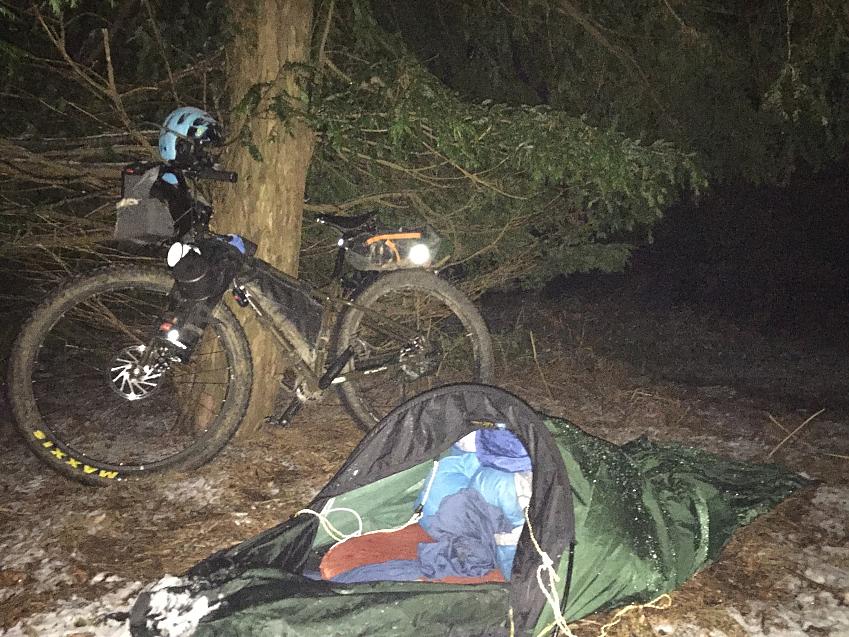 Cosy as cosy can be out on a winter's night. Photo Sam Jones

I was soon cocooned in my sleeping bag, toastie warm and taking a nip of whiskey while I read my book by the light of my headtorch. Though I'd not ridden far, my eye-lids soon began to droop and the land of nod beckoned as snow flakes settled on my bivi with a quiet pitter patter. 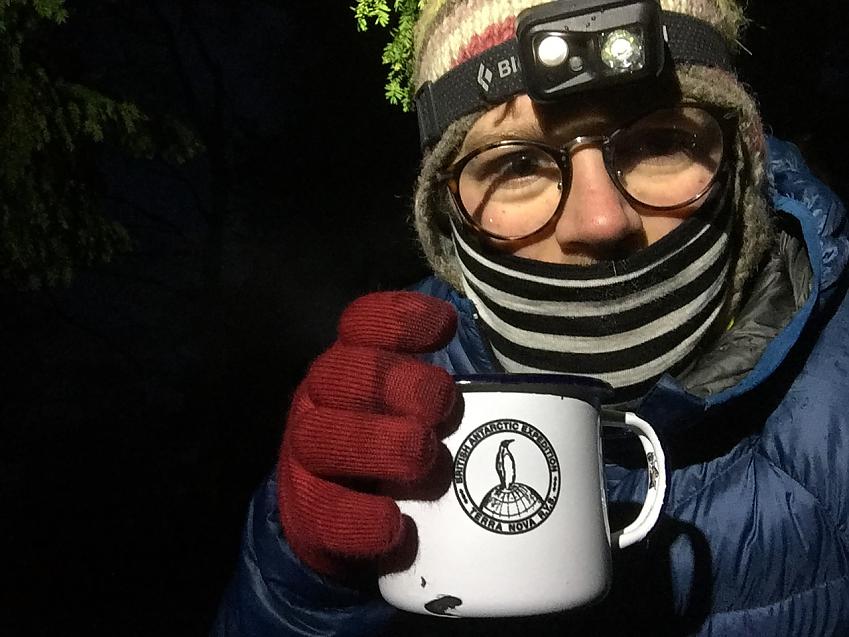 I woke roasting at half six, and peeling myself out of my bivi, I set the stove ablaze and soon had a brew to hand and a (not so) hot cross bun while waiting for the the sun to rise.

With the winter landscape gradually appearing, I packed up and was soon hurtling down the snow lined hill side back home to pick up my toothbrush (note to self, never forget your toothbrush) before rolling back into work in time to write this article up for CycleClips. 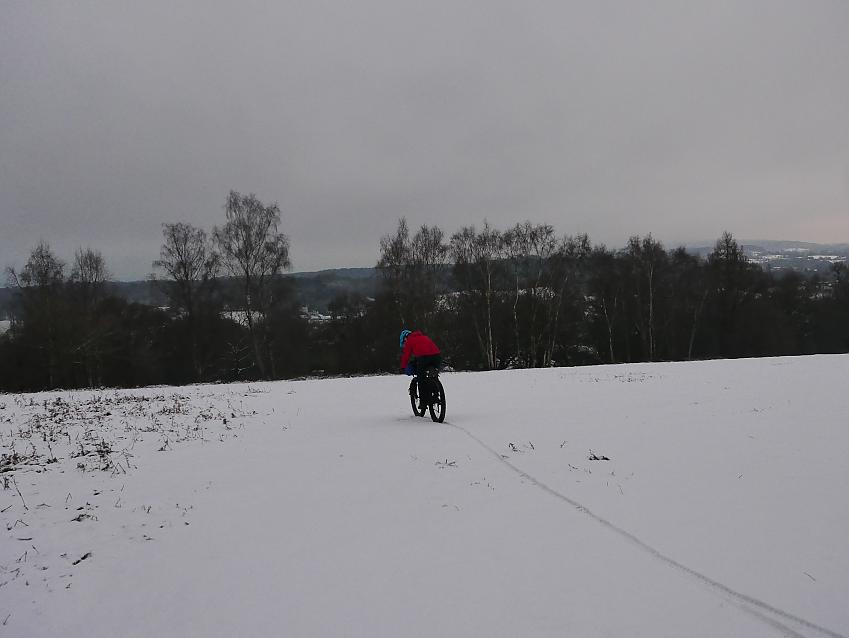 Now sat at my desk, I feel refreshed, ready to take on the world and already looking forward to my next micro-adventure!

You can see Sam's route on the Relive film below:

Sam’s top tips for camping out in the cold: 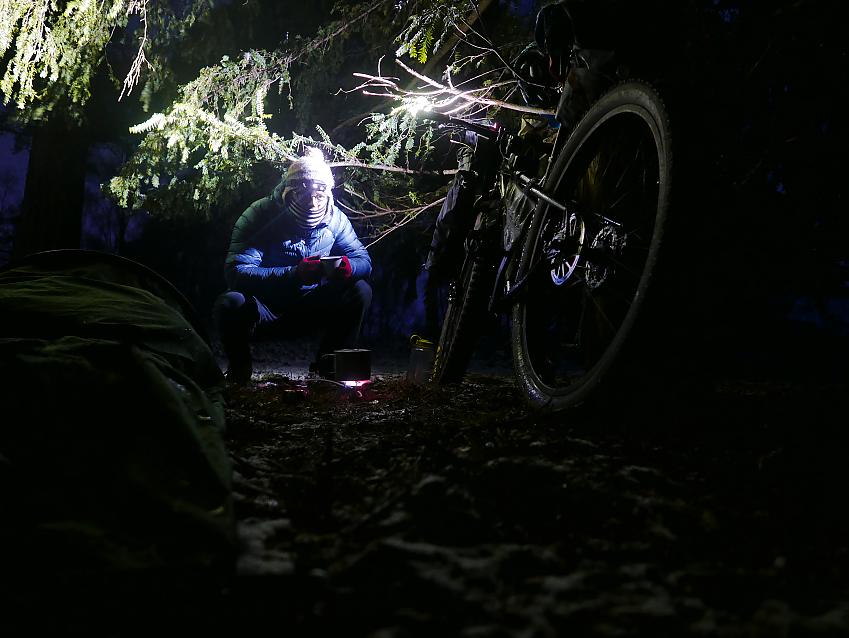 How to keep your fingers and toes warm when cycling View

Why should I try wild camping? View
Cycling UK continues to support the UK to cycle
This remains true during this difficult period with the ongoing threat of coronavirus Covid-19
Read our latest advice on cycling
Join Cycling UK to help us change lives and communities through cycling
Membership gives you peace of mind insurance, discounts in cycle shops, rides & routes
Join now