There was much mirth in the Commons this Thursday morning, as MPs, clearly sharing some private joke, kept on urging the Secretary of State and his Transport team in various ways to get a “wriggle on”.

Possibly this was the phrase of the day, and there were prizes for inserting it within as many addresses to the Government front bench as possible, who knows? While there was a distinct lack of the Transport team getting a “wriggle on”, there was plenty of wriggling, no more so than when the questions turned towards cycling.

As Cycling UK pointed out at the time of the Autumn Statement last November, cycling was set to receive £300m for the next five years, which spread equally over the five years of Parliament would mean £1.39 per head, for everyone who is not a Londoner.

Since then, we’ve had a chance to look a bit more closely at the breakdown, particularly after Cambridge MP and Shadow Transport Minister Daniel Zeichner was able to get a breakdown of the allocation of funding for cycling and walking. Unfortunately, as The Times (£) reported today, our findings make for grimmer reading than our initial prediction of £1.39 per head.

On the basis of an even spread, the year-by-year breakdown would be as follows (C= cycling; W = walking):

Which in terms of an annual spend per head on cycling and walking outside of London drops from £2.07 to £0.72 over the next five years. 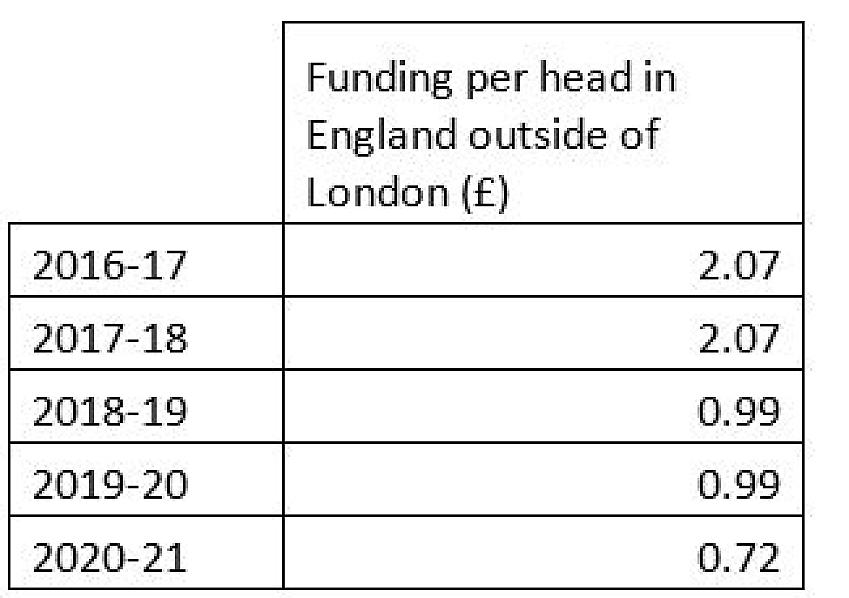 It is simply not realistic, and highlights the emptiness of the fine words and rhetoric of this Government’s commitment to cycling as enshrined in their Cycling and Walking Investment Strategy (CWIS). As Cycling UK’s Policy Director Roger Geffen MBE said at the time of the launch of the CWIS consultation on Easter Weekend:

"This is a far cry from both the Minister for Transport, Robert Goodwill MP and Prime Minister’s aspirations to see funding for cycling reach £10 per head by 2020. While local authorities will understandably be expected to provide further funding to top up what the Government offers, it appears, at the moment, that cash strapped councils across the land have to magic up an additional £9.28 per head to meet a Government ambition.

“Despite its laudable aim to normalise cycling and walking by 2040, this strategy’s draft targets suggest that, outside London, English cycle use would eventually reach Dutch levels by the start of the 23rd century, while its funding allocations mean even slower progress.

“If ministers are serious about their stated aims, they need to reallocate some of their £15bn motorway and trunk road budget towards cycling and walking. That could help tackle congestion, pollution, physical inactivity and climate change, whereas roads spending will do the exact opposite.”

Yesterday during Transport Questions, Zeichner put this to Goodwill when he said: “…according to Cycling UK’s breakdown, annual funding for cycling outside of London is set to fall to just 72 pence per head by 2020-21. Does the Minister really believe Britain can become a cycling nation with funding levels at less than a tenth of the level that has been widely recommended?”

We need to see ambition underpinned by genuine funding and clear goals if Britain is to truly become a cycling and walking nation.”

Unfortunately, the Minister’s response was of someone wriggling under the pressure of a difficult question. There was no satisfactory response to this question, apart from the tired old line of how this Government has seen funding rise from £2 per head in 2010 to £6 per head in 2015, which Zeichner rightly interpreted as the Minister admitting to a “dramatic cut”. After Transport Questions, Zeichner went further saying:

“These new figures expose the ever-widening gulf between Government rhetoric and reality. A year ago David Cameron said he wanted to ‘increase spending further to £10 per person each year’ and a funding level of 72 pence per head falls woefully short.

“After promising three years ago to kick-start a ‘cycling revolution’, the Government has back-pedalled. Their aspirations are worthy, but their cycling and walking investment strategy just doesn’t deliver.”

“We need to see ambition underpinned by genuine funding and clear goals if Britain is to truly become a cycling and walking nation.”

You could be forgiven for thinking that austerity Britain is still all the rage, and that similar transport programmes are under the cosh, but at the same time as funding for cycling (and walking) will plummet to the price of two pints of milk, funding for motorways and trunk roads will sky rocket.

In 2020/21, through the Road Investment Strategy (RIS), which the CWIS is loosely based on, the Government will spend £4bn gold plating motorways – approximately 120 times what active travel will receive.

As the Government faces going to court once again for its failure to tackle illegal levels of air pollution, and an obesity epidemic is on the cards, it seems perverse for Government to persist in a road building strategy that increases pollution and inactivity while ignoring cycling and walking.

At Cycling UK, we believe a partial reallocation (all would be great but unfortunately not realistic!) from the £15bn allocated to bring cycling and walking up from £300m is the way forward. Couple this with national design standards for cycle design to ensure that the funding is spent well, rather than wasted and it will not take England centuries to reach Dutch levels of cycle use, but only decades.

Getting Britain Cycling can be done. The Government just needs to get a wriggle on and provide funding for cycling and the CWIS – and we’ll be calling on all cyclists to support this call in the very near future.

Britain has never had a

Britain has never had a transport strategy, for any mode. Not for canals, not for railways, not for roads, not for air. So why suddenly would they back a strategy for cycling when they don't do strategy?
Think about it and ask yourselves why?
If you can come up the answer you might then be a step closer to solving this riddle.