Cycling UK staffers Julie and Laura set off to the Surrey Hills to search for Suffragette locations
By Julie Rand
Tuesday, 17 July 2018

Despite having lived in and near the Surrey Hills for most of her life, and cycling in them since mountain biking was invented, Julie Rand didn't realise that the area was central in the fight for female suffrage. An overheard conversation outside a coffee shop set Julie off on a quest to find out more.

The small but spread out village of Peaslake lies about seven miles from Guildford in the heart of the Surrey Hills. Whether you are a roadie, a touring cyclist or a mountain biker living in the south east of England, you' ve quite possibly ridden through or around it. It's about 25 miles from outer London and best known by cyclists for the cheese straws and mugs of tea sold in the village stores.

On most sunny weekends, you can hardly move for the people on two wheels congregating around the bus stop and swapping tales of epic road climbs and gnarly descents on sweet singletrack. You may even spot a 'celebrity' mountain biker or two, as some of those who love the more extreme side of the sport reside nearby.

Yet, few people seem aware that the village has a link to cycling that dates back to the earliest days of cycling history, and was also central to the immense fight for female equality during the early years of the 20th century. Peaslake's Wikipedia entry refers to Billie Thomas, Winner of 'Best in Show' at Crufts in 1972, but makes no mention of the important part some of its residents had to play in not only the struggle for women's suffrage, but also the arts, the peace movement and workers' rights, both in the UK and abroad. It does not even mention that Gandhi himself stayed in the village and took inspiration from some of the campaigning undertaken by Surrey's activists. 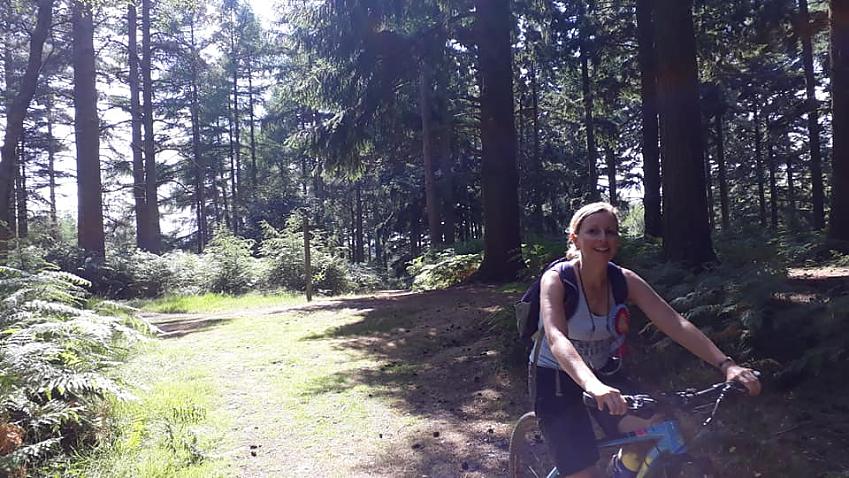 Laura riding through the woods above Holmwood

The Pankhursts in Peaslake

It was sitting outside the village stores in Peaslake sipping a proper mug of cyclist's tea that I happened to overhear a woman saying: "Well of course, Emmeline Pankhurst and her daughters spent a lot of time in Peaslake." Intrigued, I decided to find out more.

With 2018 marking 100 years since some women first gained the right to vote, we had been looking at the links between some of our earliest members and the suffrage movement. Women such as our first female Trustee Rose Lamartine Yeats and  Millicent Fawcett, who led the National Union of Women's Suffrage Societies (NUWSS) and whose statue was unveiled this year in Parliament Square - the first of a woman and by a female sculptor.

They were pioneering cyclists who recognised that the bicycle was a symbol of freedom, emancipating women from not only the home but also the confines of their restrictive clothing. Millicent was one of many women who spent time speaking out on the topic of votes for women in and around the Dorking and Guildford area, as well as nationally. She and Rose are both among Cycling UK's 100 Women in Cycling 2018, which forms part of our Women's Festival of Cycling.

Further research revealed that other villages I knew well from bike rides, such as Abinger, Shere, Coldharbour and Gomshall, were also home to many other campaigners and a hotbed of activism. Their inhabitants spoke at events, lobbied government, carried out raids and also provided refuge for women like the Pankhursts (Emmeline and her daughters Christabel and Sylvia) who had been force fed in prison and needed the peace and quiet of the Surrey countryside to recuperate before returning to the fray.

With the Women's Festival of Cycling in July providing the perfect excuse to organise a ride aimed at women, I hit upon the idea of an off-road route to explore some of these locations and perhaps take a look at some of the houses where the main protesters had lived. But there was very little information online to find out more. Out of the blue, however, I was contacted by local author Kathy Atherton, who had heard of the proposed ride. Did I know, she asked, that on the very afternoon the ride was planned for there was to be an unveiling of a plaque in Holmwood, south of Dorking, to commemorate Fred and Emmeline Pethick-Lawrence.

They were former owners of a house known by them as The Mascot, designed by Lutyens. It had been their rural retreat for two decades and had hosted many of the prominent suffragists, political campaigners and artists of the early 1900s. Of course, I had no knowledge of this, or of the Pethick-Lawrences and their extraordinarily full and history-changing lives. With the strong connection between cycling and female emancipation, Kathy felt it would be great if my ride and the event could be somehow brought together so I decided to extend the ride from Peaslake to Holmwood. After reading Kathy's fascinating book 'Suffragettes, Suffragists & Antis - the fight for the vote in the Surrey Hills', I had a much better idea of the Pethick-Lawrences' work and that of many others in the area, as well as the places they had lived in, and planned the route so we could pass through as many of them as possible,.

The fight for the vote in the Surrey Hills

After lots of dry weather, the ride along the North Downs Way from Guildford via Newland's Corner was easy and fast - it can be a quagmire after rain - so we dropped quickly down through Gomshall and past  the location of 'Four Ways', the house the Pethick-Lawrences lived in in later life and where they hosted Gandhi. We then took the road into Peaslake, passing the lane leading to Mackies Hill, home to prominent suffragists and artists Helen Gordon Liddle and Marion Wallace Dunlop.

Arriving in Peaslake and the obligatory stop for tea and cake, we spotted Brackenside (pictured below)right next to the village stores. This is where the Mrs Pankhurst was brought to convalesce after a stint in Dartmoor for incitement to commit criminal damage in an attack on Lloyd George's house. Kathy says: "There is no suggestion that she was personally involved, and probably did not even know of it in advance, but she stood by those who did and accepted responsibility for having encouraged them.* The police carried out surveillance on the house in case she escaped. There's a memorial plaque to the Pethick-Lawrences at Peaslake Village Hall (which is also known as the War and Spottiswoode Memorial Hall after its benefactors, who were also pro-suffragists). 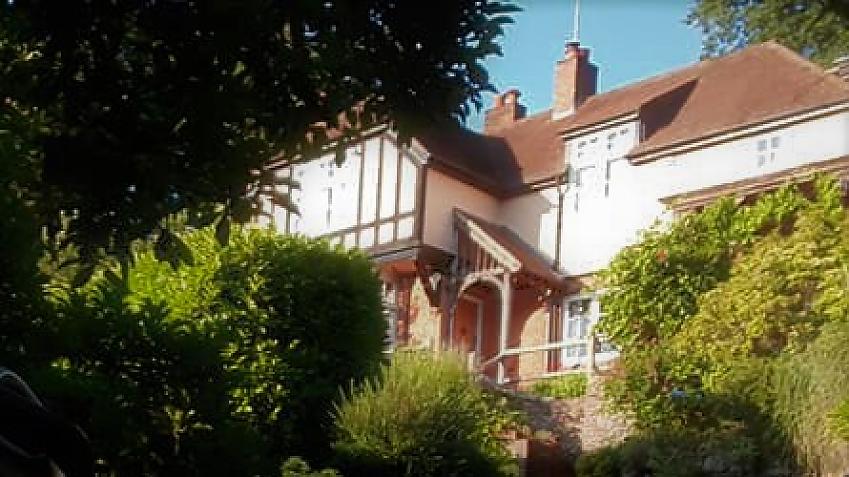 A steep ride up Radnor Road to Holmbury Hill and then a nice off-road descent to the pretty village of Holmbury St Mary brought us to the foot of the biggest climb of the day: long rollercoaster of a bridleway that snakes through the trees past High Ashes farm and then across the road to another bridleway leading to Leith Hill Tower, the second highest point in south east England, where there are spectacular views across the Weald to Gatwick Airport and the South Downs in the distance in one direction and a glimpse of the vast skyline of London in the other.

The women (and men) of the suffrage movement enjoyed many walks - and probably cycle rides - in and around this area, formulating the policies that directly led to women such as ourselves enjoying the freedom to vote and to explore the area by bike. It's strange to think it was just ten decades ago that all this militancy was taking place, with many women not even having the right to study, obtain qualifications, own property or take part in wider society - what would the suffragists have made of us in our baggy shorts and lycra tops, I wondered?

Finally, a thrilling winding descent through the trees from the village of Coldharbour, where reformers Frederick and Margaret Pennington lived at Broome Hall, to Holmwood. We rode along the shared use cycle path next to the busy A24 and found the imposing facade of the Dutch House, the gate draped in the colours of the suffragette movement of purple, white and green. The current owners welcomed us in with tea, cake and refreshing cold cups of fruit juice. Speeches by Kathy Atherton, and other experts on the suffrage movement, including a lady dressed as Emmeline Pethick-Lawrence herself, preceded the unveiling of the plaque by the Pethick-Lawrences' only living descendant.

It commemorates Fred and Emmeline's occupancy of the property from 1901 to 1921. There was just time for more tea and sandwiches before we unlocked our bikes for the long ride home for me and the one-mile ride to Holmwood station and the train to Victoria for Laura. 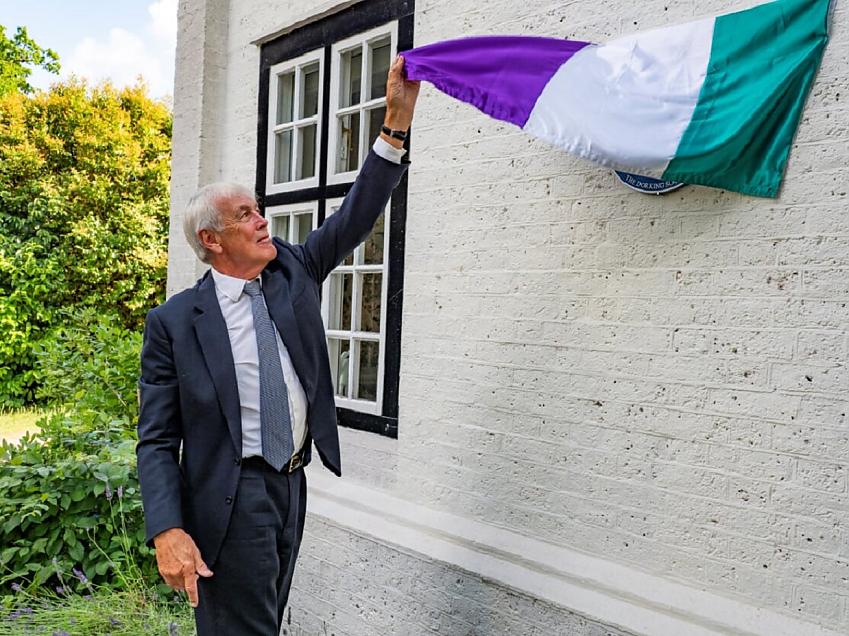 The blue plaque is unveiled by the Pethick-Lawrences' great nephew. Photo by Royston Williamson 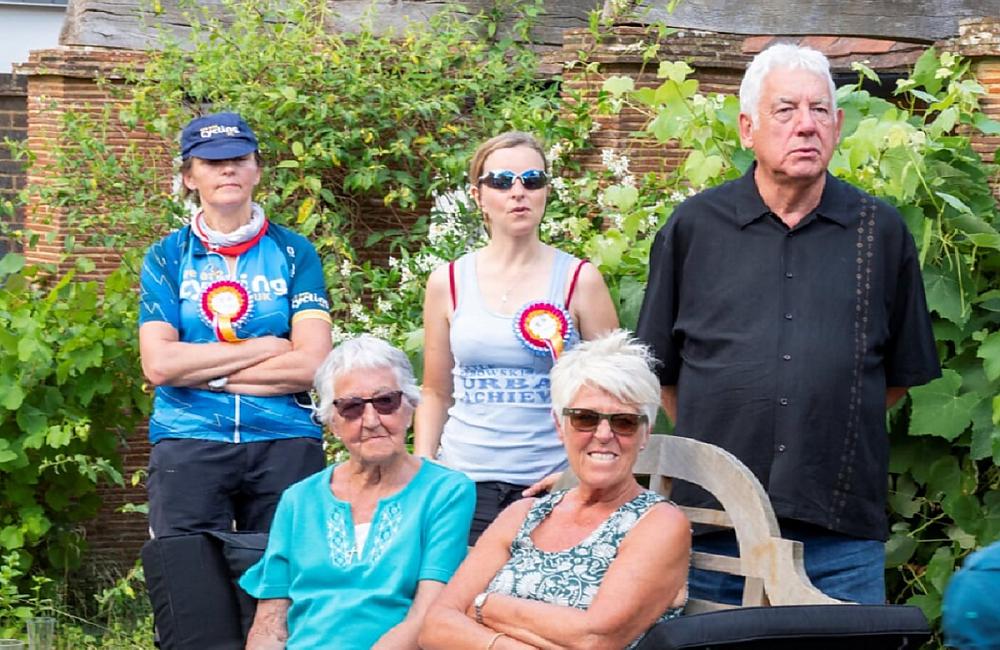 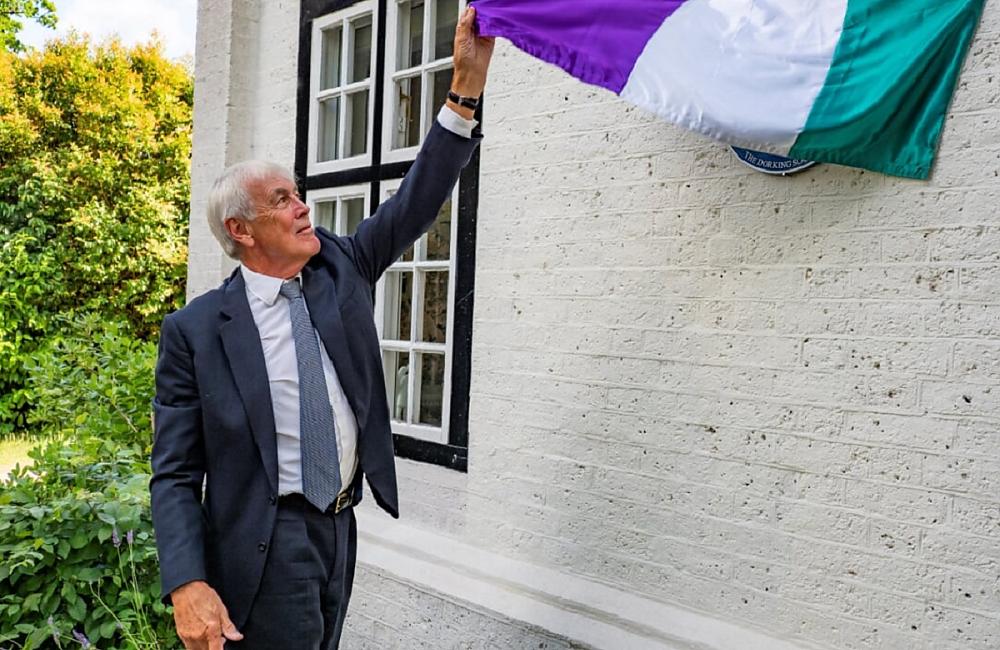 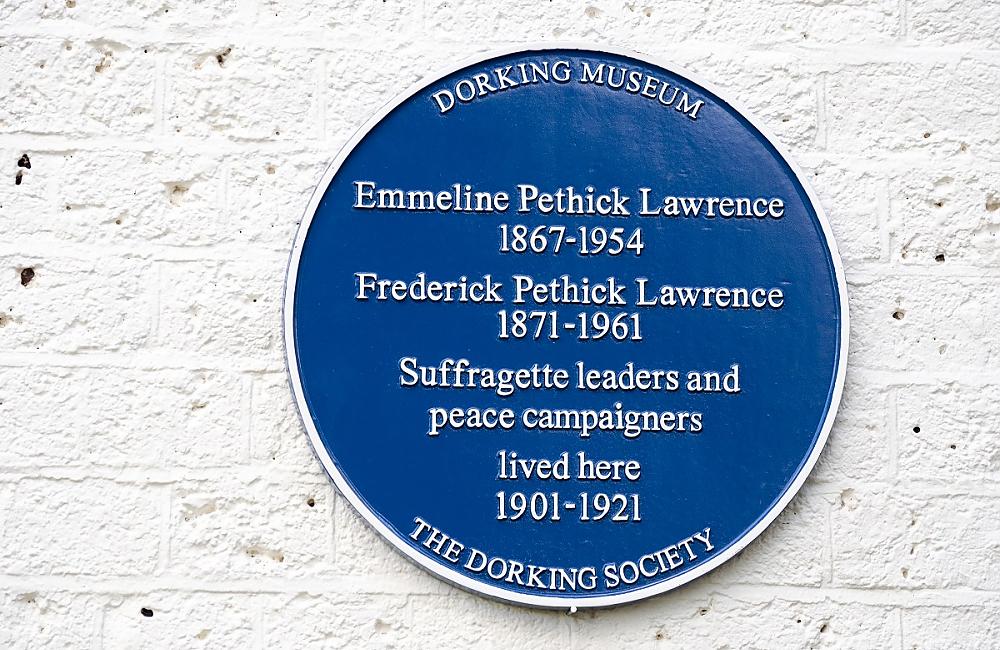 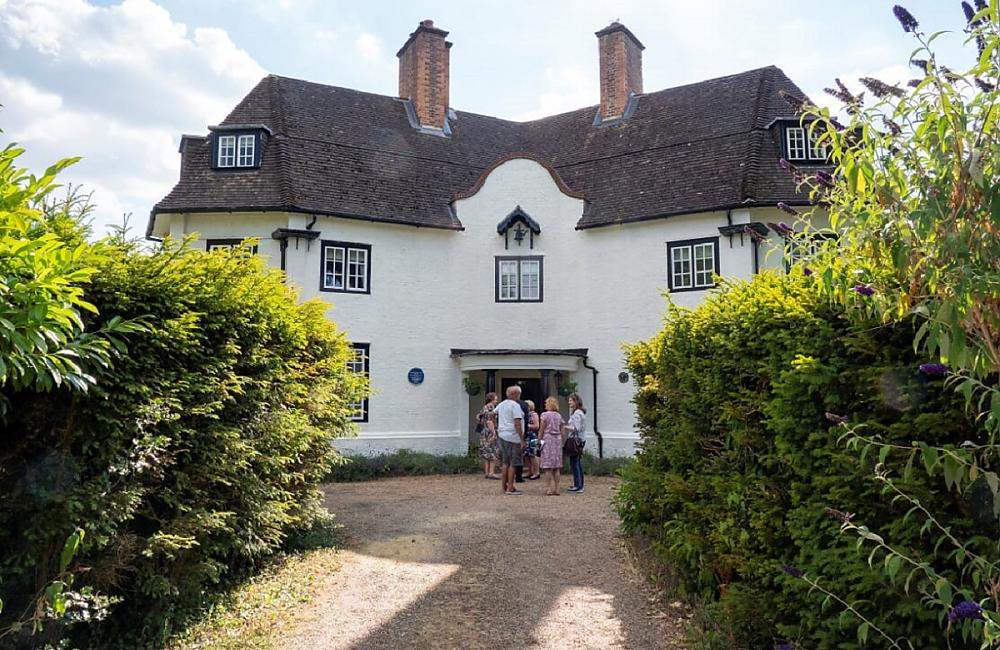 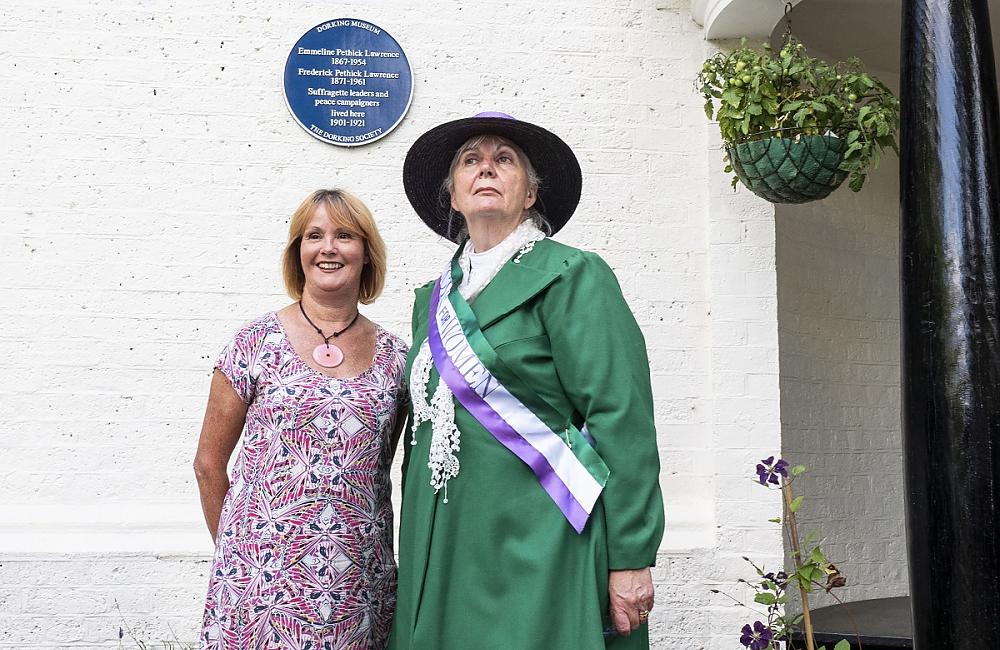 This is a ride of about 18.5 miles in total, with 1,800 feet of climbing. It can be done on road if weather conditions make the off-road route too difficult or unpleasant, equally you can mix and match as you wish - ideal if you have a gravel or adventure bike!

NOTE that all these houses are now in private ownership and are not open to the public though the blue plaque at the Dutch House is visible from the gate.

Refreshments can be found at:

Stations on or near the route include:

If you'd like to know more about cycling and the suffrage movement, there's a talk on Rose Lamartine Yeats by Hugh Morgan of Merton Cycling Campaign at Colliers Wood Library on Saturday 21 July. Rose was the first woman to be elected to CTC Council as our Board of Trustees was then known in 1907 and a campaigner for women's right to vote.

Kathy Atherton's book 'Suffragettes, Suffragists & Antis - the fight for the vote in the Surrey Hills' can be ordered online or purchased at Dorking Museum. It contains much more fascinating information on the rich and remarkable lives of all those campaigners for social justice who lived in the area at the time.

With thanks to Kathy Atherton for background information and Royston Williamson of Dorking Museum for some of the photographs plus the current owners of the Dutch House for their hospitality.

Cycling events are back! West Surrey Cycling Club's Tour of the Hills is a great success View
Cycling UK continues to support the UK to cycle
This remains true during this difficult period with the ongoing threat of coronavirus Covid-19
Read our latest advice on cycling