My journey in cycling as a trans woman

Jess in action at an off-road race. Photo: by Joolze Dymond

My journey in cycling as a trans woman

Retired Surrey Hills MTB coach, Jessica Weston shares her story as a transgender cyclist to mark #RainbowLaces Day. She describes her difficult journey transitioning, and how her love of cycling has helped her along the way.

When I was 13 years old, I got a boy’s Raleigh Equipe for my birthday. It was the tradition in my family, to get our first brand new adult bike at that age. I was following in the pedal strokes of my two older brothers. I had wanted a Dawes Ladybird like my mum’s, but I also wanted a ‘proper’ racing bike: this meant a bike with a crossbar, as ‘a boy like me’ didn't want a step through bike anyway, according to the man in the shop.

At this tender age, as I see now in my own step-daughter, I was taking my very first steps into adulthood. There was so much I needed to understand, so I looked to my older brothers. Paul, who was three years older than me, was riding his bike out to Beningborough Hall with his friends. That seemed like a long way, it was somewhere I had only ever been to in the car. The idea of being able to get to places on my own at that age, without an adult to drive me there? That seemed like freedom to me. That feeling of freedom has been the basis of my love of cycling ever since.

I joined a cycling club in York and started going on Sunday club runs. Freedom was multiplied because of the experienced older cyclists who took out the ‘B’ group runs that the younger members were encouraged to ride along with. We did runs of 30 and 40 (or more) miles, much further away than Beningborough Hall. My horizons were expanding and I started to to look to professional cycling. I enjoyed the practice of riding in a peloton, the hand signals, slipstreaming and avoiding half-wheeling the rider in front. I started to follow professional cycling, I shaved my legs, and bought myself lycra shorts and a jersey with pockets at the back.

It seems weird to say it but cycling kept me alive. As a teenager, the excuse to shave my legs relieved the gender dysphoria I was experiencing just enough; staying fit and focused on my plan to go away to university, where I would gain enough autonomy to transition, was enough to see me through. I did have a wobble though: I gave cycling up during my A-level years because I thought it wasn’t ‘cool’, but I soon felt the hole in my life and bought my first mountain bike, a Saracen, shortly before leaving for the University of Sussex at Brighton in 1992.

I made many new friends at uni including Anna, the child of an exceptionally talented outdoorswoman from Buffalo, New York State. She rode a Specialized Rock Hopper and we had so many adventures together, riding straight into the Downs from the back of the university.

But it wasn’t easy to transition, even once I had my ‘autonomy’. Autonomy only got me so far before money, knowledge and resources became the limiting factors. I was able to talk to my friends and tell people I was trans more easily than I was able to afford to replace all my clothes in one go. Navigating my way though being trans was tough, there were lots of in-between stages that felt initially better, but quickly became uncomfortable; the awkwardness drew unwanted attention and friends felt it, too.

In well-meaning ways, their subconscious prejudices always seemed to be pulling me back where I had come from and were rarely helpful for where I needed to get to. It makes me laugh today when I see the rise in patients presenting as children to Gender Identity Development Services (GIDS), which some label as the ‘trans trend’, as if it is fashionable! But that’s another article entirely...

Cycling, and that Saracen mountain bike, kept me sane through these difficult years. It was my transport everywhere in Brighton; it was my gym, and it was my weekend mile-munching meditation machine. Cycling really allows my mind to switch gears and reset.

So far so trans, it’s a little bit of a sob story, with cycling being the only good thing. But that’s not really true: I lived, I really lived. I was finding myself, like every other teenager and young adult. Once I managed to get to see the psychiatrist who helped me unlock my transition, I was away, and my adult world opened out in the same way as my cycling world had when I joined the club seven years earlier.

In a short time, I was working, my transition was a thing in past tense, and all my friends from uni had moved on in their careers. I had moved town and was living in Surrey. Before I knew it, no-one around me knew if I was trans unless I told them. I had accidentally become ‘stealth’ (this is a word trans people use to describe the situation of living post-transition without anyone knowing of your past). This is some trans people’s dream; I’m not sure if it was ever mine, but it took many years to understand what a poison chalice it is.

I am so grateful for the life I have led and for all that cycling has given me.

Mountain biking developed for me when I got a job in Leatherhead in Surrey in around 2003; I met the guys at Cycleworks - a local bike shop - and started joining them on their night rides. I think I was the only woman going out with them and they were fast! I struggled to keep up, but I wasn’t always the slowest.

I stuck with it and got quicker until I could almost keep up, as long as we were riding on the flat or downhill. At the same time, I was training to become a mountain leader and a mountain bike leader. For practice, I also started adventure racing, combining northern races with visits to my parents over the weekend, returning to work on Monday for a rest.

Competing as a trans woman

Adventure racing was a reason to practise navigation. Initially, I never thought about competing as a trans woman against cis women (people who identify as women and who have been assigned as female at birth), at least not initially. The team I was in came third and second several times in the female pairs category in a really thin field. It could have been my imagination, but I thought I sensed some disapproval from the race organiser: in British people, prejudice is sometimes very subtle but I’ve had a lifetime of practice reading it.

It's easy to assume that starting life with a male body equals male strength, but the reality for trans women in competition, however, is that we are stuck with a heavy skeleton that does not change after transition. Moreover, our low testosterone and high estrogen mean we revert to a normal female ability to maintain muscle mass, which is bad for power to weight ratio.

Fear of being outed

I allowed the fear of being outed as trans to put me off cross-country mountain bike racing for many years. I didn’t think I could handle the injustice of being barred from competing or having my success attributed to my trans origins. When I did eventually pluck up the courage, I was utterly outclassed by the women I lined up at the start with. In spite of, I think, being really quite fit and at an all time low weight of just 70kg, I just could not climb like these exceptional riders. My highest ever place was 8th, in a field of less than 20.

It was the International Olympic Committee (IOC) who signalled the change I needed to see in order to compete, when they ruled that trans women could compete in the Olympics, as long as their blood testosterone level was less than 10nmol/l. Now, we see Caster Semenya, a woman who was assigned female at birth and whose body naturally produces more testosterone, being held to this standard, which was designed for trans women.

Caster is intersex; there are many different kinds of intersex (individuals born with any of several variations in sex characteristics including chromosomes, gonads, sex hormones or genitals that, according to the UN Office of the High Commissioner for Human Rights, "do not fit the typical definitions for male or female bodies"), but a full 2% of the human population expresses some sort of intersex phenotype. That means it's as common as ginger hair in the UK. Including intersex people, 10% of the population expresses differences in sex, gender and sexuality, making up the LGBTQI spectrum. Interestingly, there has never been a trans Olympian who has qualified to go to the games since that ruling.

Currently, sport is split into just two categories: men and women. Diversity and inclusion need to go further to include trans, non-binary and intersex people who don’t neatly fall into these categories. We’re just starting to wake up to this now, and I thank Cycling UK for running a #RainbowLaces Day feature to highlight this issue.

Giving back and gratitude

In the end, I did find a way to contribute to the sport I love, however: I became a MTB guide and a coach; I have taken many hundreds of people out riding, and I hope I have managed to imbue them with a sense of their own potential.

I am so grateful for the life I have led, and for all that cycling has given me. It feels hard to then declare that its organisations need to do better to improve their diversity and inclusion. #RainbowLaces Day is a good start, and I hope it sparks conversations because change happens when good people communicate, and I know that cycling organisations are full of good people.

Cycling UK is proud to support Stonewall's campaign for greater inclusion in sport for people from the LGBT community. You can claim a free pair of rainbow laces of your own courtesy of Cycling UK (limited supplies) or order your own from Stonewall - they now come in a range of different colourways to show support for people from a range of different identities, such as Lesbian, Bi, Non-Binary, Trans, and Asexual. 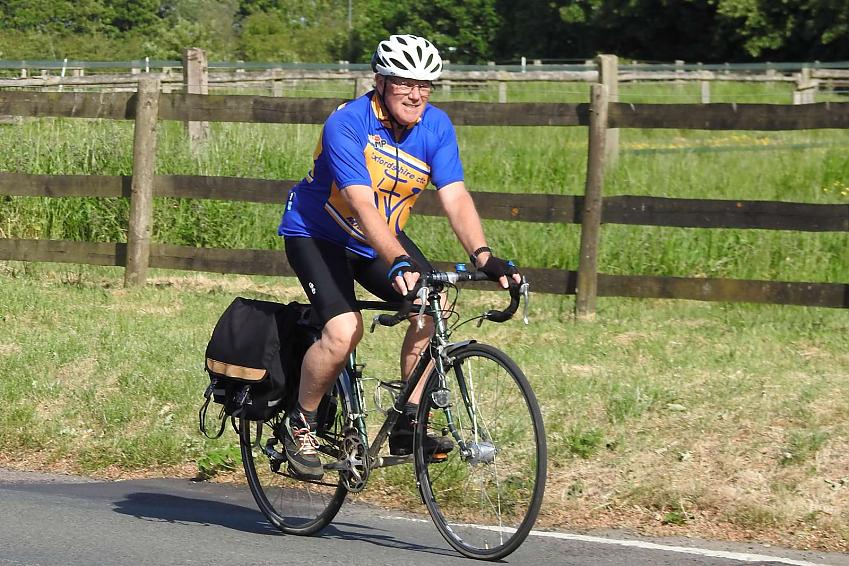 A rider sporting some rainbow laces

Tell us your story

Do you have an interesting story to tell about your journey in cycling? We'd love to feature a range of stories like Jess's to inspire more people to experience the benefits that cycling can bring to them. Please get in touch with us if you do.