My journey into cycling

My journey into cycling

Why do some women take to cycling and others do not? Cycling UK's Women's Festival of Cycling Coordinator Julie Rand describes how she fell in love with it from a young age and has continued to cycle ever since - even making it into her career.

Cycling UK's Women's Festival of Cycling aims to help redress the gender imbalance in cycling: fewer than a third of our members are female and women are very much underrepresented in all aspects of cycling, whether it is commuting, road racing and riding, mountain biking or leisure cycling. So how and why do I continue to cycle pretty much every day, even though few of my contemporaries do so?

I think part of the reason is that I've always been quite tall and long of leg, so one of my earliest and proudest memories is of being able to ride my brother's racing bike around our small back garden in Surrey many decades ago. I have absolutely no recollection of ever not being able to cycle so when people ask me 'How long have you been into cycling?', I answer: 'Forever'. I guess the learning process must have been fairly painless, meaning I wasn't put off from continuing riding a bike, unlike many women, who having fallen off as youngsters either weren't allowed to cycle again or opted not to.

As a child, I also enjoyed the total freedom of a child in the sixties and seventies to play outdoors all holidays from early morning to the last rays of sunlight had disappeared (yes, summers were definitely longer and warmer then!). This meant there was plenty of time to go cycling and I was also fortunate enough to live in an era when there was no such thing as 'screen time' except for a couple of hours of shaky black and white TV a day (which I did adore too, I must confess).

The other important factor in my childhood cycling was the fact that we lived on a modern housing estate so the roads were fairly quiet. One of my (and my brother's) favourite games was playing a sort of made-up reliability ride or treasure hunt, in which we sped around following handwritten instructions to a particular location. Less pleasant a memory is of the day I took my much younger sister, probably aged only 4 or 5, out on her bike and down what I remember as a very steep hill (in reality hardly even a slope!). She of course fell off and ended up in hospital with concussion over Easter - which was really unfair as she ended up getting more Easter Eggs than us. For some reason, she prefers a 4x4 nowadays...

I well remember the sense of achievement and elation at having got there completely under our own steam.

Quite why I didn't end up cycling for Team GB, I'm not sure. Possibly because I don't come from a cycling family and therefore wasn't encouraged to join the local CTC (Cyclists' Touring Club as we were then known) group or a racing club. Even more annoying is the fact that mountain biking as such was just being invented across the Atlantic as I moved into my teens. Although 'rough stuff' had certainly been around for a very long time, I lived in the suburbs of Guildford and had never dreamed of such a thing as riding 'off-road', except in our back garden.

It pains me now to think of all the superb adventures we could have had beyond the confines of our estate as within a mile of our parent's house, you can access to a vast network of superb bridleways and tracks which I cycle now on a regular basis but didn't discover until my late 20s.In fact, the first time I ever ventured further afield by bike was riding on road aged about 12 or 13 to visit my cousins about seven or eight miles away - I well remember the sense of achievement and elation at having got there completely under our own steam, albeit somewhat exhausted after the steep climb up to their house!

Again, I'm given to wondering why I never became a world traveller in the mould of Josie Dew, who grew up only 30 miles or so away from me about a decade later. I also wonder why I never cycled to school, which was only a mile or so away, relying on a lift with my dad or - reluctantly - walking. Perhaps it was because as I reached teenage years, I didn't know anybody else who cycled, even in the seventies. However, I stuck with it as I enjoyed the freedom it afforded me to get into town and visit friends, although eventually catching the bus together was an important rite of passage (my own daughter gave up cycling to school when she realised it meant she missed out on the vital bonding of going by train with the others. She cycles again now she's at uni, showing that having a mentor is possibly a key factor in enabling women to cycle). 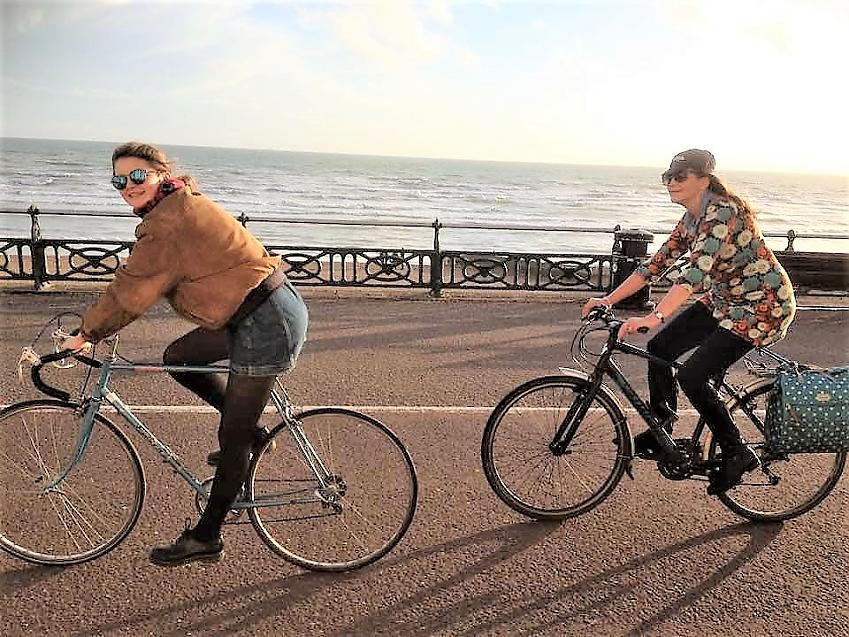 Julie and her daughter cycling together in Brighton

I've continued to cycle ever since, taking a bike to college, where it enabled me to escape the drunken stupors of my contemporaries with forays into the fresh air and countryside of East Kent, as well as avoid long, cold waits at freezing bus stops. I hardly remember not having a bike of some description, from a secondhand racer to tootle around the harbour when I lived in Sydney, to my beloved, if doomed, Dawes (called Diana after the sixties film star) that was eventually stolen from the back of the office I worked at in Knightsbridge after I had stupidly left it unlocked. This bike took me every day the seven miles to work from Streatham in under an hour, even when I was about 6-months pregnant, avoiding the snail-slow bus journey and the claustrophobic Tube. It also gave me my first taste of touring when I hatched a plan to ride across France to see my friend in Italy, planning my route using old road maps. I never made it to Siena, having met a handsome Australian cycle tourist on the ferry - but that's another story!

Cycling is the framework to my life. Other people may try a variety of different activities but nothing else, for me, betters the convenience, the variety, the adrenalin, the exercise, the social interaction, the freedom, the challenge and the boosts to physical and mental health offered by riding a bike. Whether it's flying down Mount Snowdon on a mountain bike or reaching the Mediterranean with my husband, after riding most of the way from the Channel, to going out on a night ride to just cutting through the traffic on the way to work, it's all cycling and it's all good. I just wish a few more women would look past some of the perceived barriers and enjoy it with me. I know I've been lucky, unlike many women, in not finding cycling particularly painful, difficult or mechanically too challenging (it helps to be married to a fellow cyclist and qualified mechanic, as my technical skills are pretty much non-existent), and to have the opportunity to embrace the full range of cycling experiences.

The Women's Festival of Cycling

Which is where the Women's Festival of Cycling comes in - to provide the opportunities, encouragement and support of other women to take part in this life-affirming activity. Whether short rides around a local park to epic, off-road adventures, there'll be something to suit everyone, in a friendly and inclusive atmosphere. Look out for a wide range of female-friendly events organised by our supporters this July throughout the UK. Most are free to take part in and if you organise one of your own, we'll thank you with a few small gifts from Cycling UK. 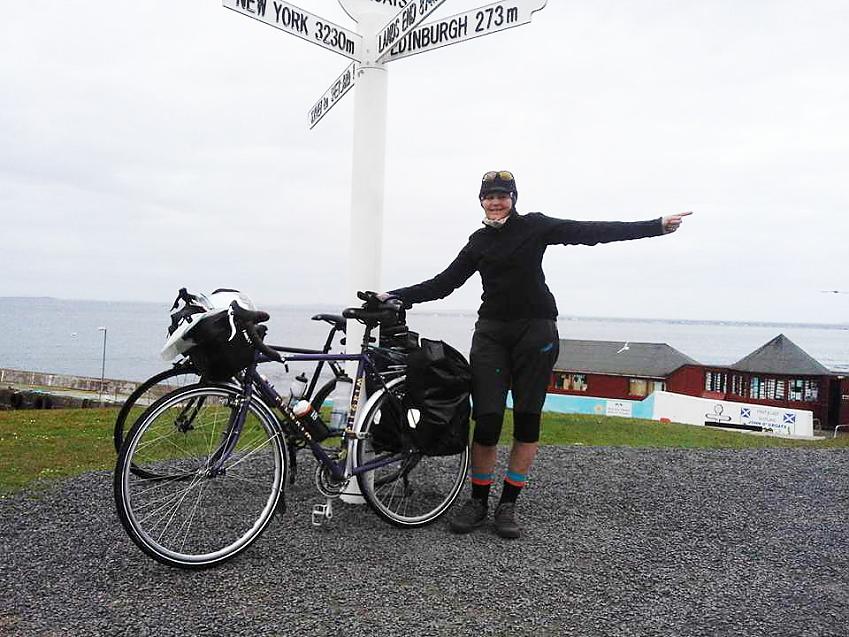