Doctor, author, and self-professed wanderer, Stephen Fabes spoke to Cycling UK about his life in lockdown as an A&E doctor preparing for a global pandemic, and the release of his writing debut ‘Signs of Life’

On 8 January 2020 - a Wednesday - I left my flat in Dalston and cycled to the A&E department of St Thomas’ Hospital to begin another day of work. It would be a short commute but for static lines of traffic, that roundly despised feature of central London. I arrived to find A&E in a state of mild chaos. Just another winter weekday in the good old NHS.

On that same morning, a small article appeared in the British Medical Journal about a new pneumonia in the Chinese province of Wuhan. It was barely a footnote in the medical news of the day. On Twitter, a hashtag was trending: #ruin2020infourwords. Jokes were made: ‘Annual leave ran out’, ‘Arise Lord Nigel Farage’ and a slew of tweets hinting of more Trump. The tweets have an ungrateful quality, reading them back today. They come from another era, before 2020 really took hold, shook us up, and aged the world so fast.

That day also marked around a decade since I’d left my job as a doctor, blowing up my life to pedal around the globe - over the following six years I would span 75 countries and 6 continents. Home at last, I’d spent the last four years in London, regaining the skills and confidence required of my day job. But my weeks in London were still full of longing, and my old life, my on-the-road life, never felt far away. Home was something to adjust to, stasis something to accept. Being wistful was a serious occupation now, and I often gazed out of rain-streaked double glazing, dreaming of old adventures, or new ones, on two wheels.

You’ll recall that 2020 got stranger, then stranger still. I began asking a new question at work, an outlying question. It came after the same old questions doctors have been asking their patients for centuries. Do you have a fever? Are you coughing? And then: Have you travelled to Wuhan? A week later, I was broadening the enquiry. Anywhere in China? Or Italy? At last, my patient’s travel history was worryingly irrelevant. Coronavirus was endemic, from Beijing to Barnsley.

On a bike, it’s not the world that’s been changed, but me. I squander hours like we all do, hopping between tasks, too easily distracted, but on a bike I’m freed at last from my buzzing phone and the minutiae of workaday life. My antennae spring up. I’m tuned in now, alert to the strangeness of the world. It’s meditative: the circular motion of legs and wheels, allowing my thoughts to wander too. There’s so much pleasure in the small stuff, a tailwind, a Snickers, the calm, above all, the calm

By March, I was queueing on chevrons and soldiers in the British Army were delivering consignments of PPE to my hospital forecourt. Such moments give you pause. My A&E department had turned, in effect, into a coronavirus ward. The virus had chased out my usual mix of patients, the fractured hips and mucky coughs, the bumps and bleeds and mental suffering. Many NHS staff were redeployed, and they embraced the earthquake, mostly with pride and a sense of duty. This was what we’d been trained for.

My dreams were unsettling and vivid, the mind’s revolt in a world so new, and upset. I found cycling cathartic. The capital was cleaned of cars now, the pavements of people. I zigzagged down Oxford Street, the London air fresher than I’d ever known. It was sunny, still and utterly chilling. We couldn’t meet people, so I remember thinking: at least I can ride.

It had been a while, too. I’d returned home a burn-out having pedalled the equivalent of 61 times the distance between Land’s End to John O’ Groats. I hadn’t fallen out of love with cycling exactly, but it was fair to say that we were on a break. As that strange, sad summer of 2020 rumbled on, A&E grew quiet, and there appeared the spectre of winter, and of fresh restrictions. My book was published, but without a live launch or book tour. I became hungry for a small getaway, while I could still get away.

The August bank holiday weekend: summer’s finale, the most fun-filled weekend of the year and traditionally, time to expend any latent joy so that it doesn’t spill over into the British winter, which tradition dictates must be long and joyless. I decided to meet a few friends at a campsite perched on a Devon hillside, where a mix of healthy pursuits, like wild swimming and hiking, would pass in tandem, and perfect equilibrium, with unhealthy ones, like sleepless nights and binge drinking. And I thought: I might as well cycle there.

It was a last-minute plan though, and last-minute plans suffer preparedness problems. Firstly, I was lacking in the stuff I needed to make such a journey, most noticeably a bicycle, since my battered, rusty thing turned out not to be fit for a run to the shops. My mum’s partner, George, kindly offered up his – a handsome and capable machine, maladjusted for my particular frame, to which I attached two panniers unmatched in size, brand and colour. After attaching everything else onto the rack with bungee cords, the rear of the bike was far heavier than the front, causing me to wheelie on the slightest of climbs. 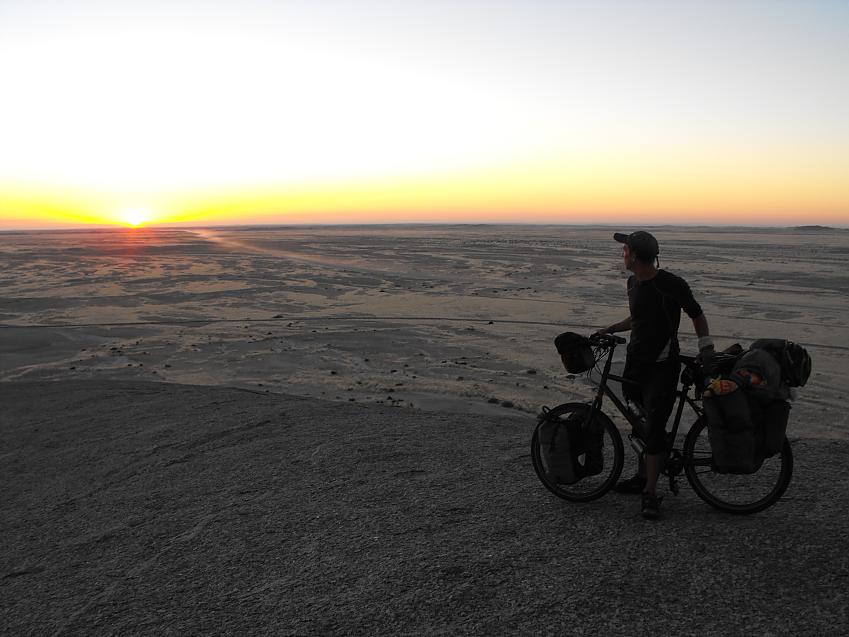 Like my journey around the world, I recall this ride to Devon now in scenes, a series of flashbacks, with little connecting them together. I have erased the filling: the brain-numbing B roads, the monotony of fields, like how the memory of childhood is filled with snow and sunshine and adventure, and those drizzly, listless days are mostly out of reach.

In a village churchyard, a man is gazing fondly up at a tree, and as I ride past him, but without looking at me, he says "That’s a lovely tree, isn’t it?"

I stop. "I suppose so." I say, noticing how its trunk split into two below head height, creating a Y shape that would be apt for a child to climb, and how the bark has peeled away into flakes, like the spread leaves of an old book.

"It’s such a lovely, lovely tree. I think I’d like to marry this tree" he says. His eyes climb the boughs and zip along the branches to the ends, his smile undimmed.

"I wonder… can you marry a tree?" he says at last, and before I can address the legal and reputational repercussions of trying to, he adds "Probably some sort of special license or summit." I pedal on, leaving him stalled, and in awe, not doubting that out here, a special license to marry flora was not impossible.

What is it about bike tours that they seem peppered with such moments – some peculiar, some comical, some moving – more than normal life likes to provide? Cycling invests the world with a depth and range and loveliness, but how? A trick of perspective, perhaps: on a bike, it’s not the world that’s been changed, but me. I squander hours like we all do, hopping between tasks, too easily distracted, but on a bike I’m freed at last from my buzzing phone and the minutiae of workaday life. My antennae spring up. I’m tuned in now, alert to the strangeness of the world. It’s meditative: the circular motion of legs and wheels, allowing my thoughts to wander too. There’s so much pleasure in the small stuff, a tailwind, a Snickers, the calm, above all, the calm.

The next day I arrived at last into Devon, a county that struck me as being mostly devoid of news, which is why the headline board outside the newsagents seemed so jarring.

It was just so hard to imagine anything so torrid here, but there was no more information, no byline. Mayday was some way off, so a ritualistic human sacrifice by Devon’s pagan community seemed doubtful. Perhaps, had I picked up the paper, I’d have discovered a less lurid conclusion.

‘Police announce that body found in town park was just Dave Lambert the butcher taking his afternoon snooze. The bloody stains on his clothes turned out to be from lamb shank.’

Precipitous hills heralded the campsite, and there was a feeling of being about as remote as you can be in southern England. This was not true of course, I can’t have been far from a WH Smith, or a Subway, but it’s an impression that I count as another boon of arriving by bicycle. Rather than hopping off the M5, I’d spent the meat of two days on winding country lanes which was like navigating a labyrinth at times, the hedges twice my height, concealing even the fields for hours.

After that sniff of freedom, I came home and begrudgingly turned forty. The apparent small pleasures of reaching my middle years – letting my ear hair grow, for instance, stretching out my stories, listening to more complicated jazz...none seem worth the ever-clearer premotions of death. I’m hopeful that I won’t always think like this. While cycling around the world, I obsessed over how far I’d come, until at some point there was a welcome shift in perspective and the miles seemed of no real value or consequence. Age is just a number too, albeit a number that represents terrifying physical decay.

For the last few months, online talks and podcasts have been useful roads to promoting my book. And now, in the twilight of 2020, vaccines have arrived in my hospital, and there are glimmers of hope if you’re a hopeful person, which I am. I won’t hex it. I won’t say that next year can’t be any more tumultuous than this one. But ‘2021’. I do like the way it sounds.

Stephen Fabes’ first book, Signs of Life, was published in August by Profile. It’s the story of a six-year bike ride around the world, exploring the social context of health and disease. We spoke to him last month about his adventure and his book. To find out more, or to get a copy, visit his website.