In this extract from The CTC book of Cycling John Whatmore, in a festive fantasy, tells of a wartime encounter in the desert and how it brought together two strange companions

To the men of the Second Battalion, Royal Tank Corps, spending the third Christmas of the war in the Western Desert, Trooper Corky Burridge was known simply as the man who loved bicycles 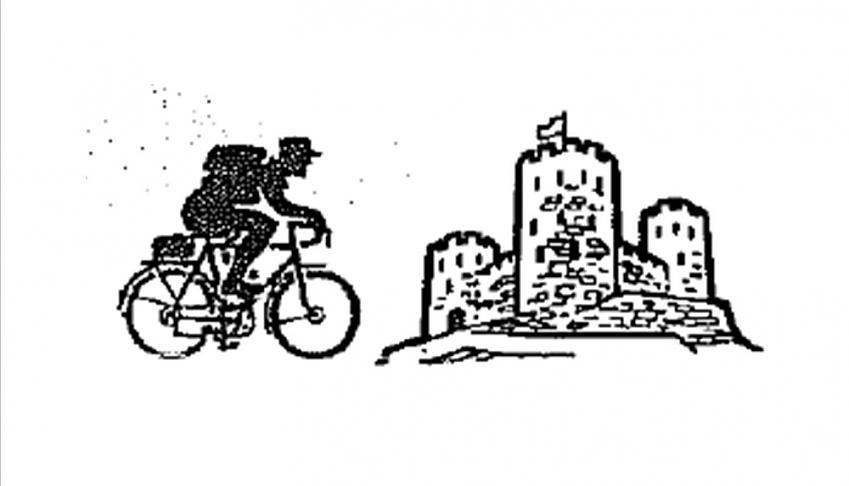 Not that he had much real chance to use even the heavy army-issue cycle that he so lovingly polished. There were, it was true, some units which had managed to form cycling groups: that was all right for the men well behind the lines, but for Corky Burridge there was only one tarmac road, hastily laid for moving up supplies to support the forward battle tanks and, apart from that, just sand, sand, sand.

“Ere, what you a’doin to that old bike o’yourn then”

The warrant officer in charge workshops stood over Corky, the floor of the makeshift repair depot littered with the remnants of tanks being cannibalised ready for the next assault

"Think you'm back in that bike club o'yourn? Never seen a man work on an ol' bike so much - and fer what? Where you gonna ride 'im to out there, then?"

Christmas in the desert that year had little of peace and goodwill about it: ahead lay the German lines, as the frequent rumble of gunfire reminded anyone who was tempted to retreat a while into the dreams of peace, perhaps of cycling with friends now no longer seen. Behind lay the supply lines that pushed up the replacement tanks relentlessly as one battle followed another for a stretch of seemingly unimportant sand.

It was Christmas Eve ... and Corky looked at his service-issue bike, its frame painted in the standard drab shades of all army cycles with his regimental number emblazoned on the top-tube. Armourers - and he was one – were entitled to a cycle so they could ride out to the columns of tanks that awaited repair beyond the confines of the depot.

But that machine had become

something more than a conveyance; it was a reminder of a better life.

Corky grinned back at the wizened little NCO whose face showed the signs of having been blasted by wind and sun during the long desert campaign.

“I’m off to look at that tin Lizzie with the damaged gunsight", retorted the cyclist and scooted on the pedal out of the workshop. One way out of the unending routine of war, he had found, was just to get on that bike.

The bitterly cold desert night hit him as he pedalled along the sandy track of the advanced camp. All around him was darkness: the clusters of prefabricated huts, and beyond that the tent lines surrounded by coils of barbed wire, were merely dark shadows against a dark sky. A few stars glimmered above but the moon, newly risen, was obscured by the low-lying sandy haze.

"And a damned good thing too", thought Corky as he yelled a greeting to the sentries at the makeshift exit to the camp. That far forward towards enemy positions, darkness was an added chance of survival.

Once outside the camp he felt the delight of making the heavy bike weave in and out of the ruts along a desert track. The tarmac road he avoided: even at night it was subject to machine gun attacks. With memories of long-ago rides through wild country he sped along, edging ever closer to enemy lines.

Corky first became conscious of the coming sandstorm when the breeze flung a swirling mass of dust in his face. Large pieces of vegetation, torn by the wind from the sand, rolled past though he heard them rather than saw them in the darkness. He lowered his head and pedalled into what by now had become a screaming, choking cloud of dust, realising only too late that he was no longer on anything that could even loosely be called a track.

He began to circle back in the general direction of the repair unit, controlling the sense of panic that gripped him and for perhaps an hour he struggled, turning this way and that to avoid the outcrops of rock that appeared before him as black masses.

At times, the heavy bike slipped into a dry ditch or was brought up by a stretch of soft sand; sometimes he was up flung off, bruising himself despite his heavy Clothing. He cursed silently.

The wind rose to new heights and finally, the sand lashing his face and trickling into his eyes, Corky flung himself down and covered himself with his greatcoat, spread over him in the manner of a cape until the storm should cease.

It passed as quickly as it had arisen and as the moon finally rose above the haze the landscape was awesome and beautiful.

Corky struggled to his feet to look at the scene. What he did not expect to see was there only a few paces away from him: the figure of a man, and even more incredibly, he was clinging to a bicycle.

He felt a surge of unexpected pleasure at finding a fellow human being in such a spot. Picking up his own bike, Corky began to push it through the soft sand towards the soldier -for now he could see that the figure was similarly dressed in a greatcoat.,

Moments later, with a sickening feeling in his stomach, Corky stopped the short as he was but a yard or so away from the dark figure. Something was wrong: in the place of the British forage cap that the man should have been wearing was a fiat cap; the, greatcoat that protected the soldier from the cold was of a strange pattern, and even in the moonlight he could see that its colour was not khaki but field grey.

Corky spoke no German but no knowledge of the language was needed to tell him what the guttural tones meant.

The question came again. The German had halted -for Corky no longer had any doubt of the soldier's nationality. The stranger seemed to be equally nervous. The moon glinted on the map case slung from the top-tube of the cycle. It took Corky, his senses sharpened by the long desert campaign, only seconds to decide that the soldier was a member of a cycle reconnaissance patrol, still popu­lar with the German Army. Like Corky, he was unarmed: carrying-a rifle on a bicycle was rarely done.

Just who was behind whose lines was a question that Corky did not feel it was necessary to explore.

Then came a deep belly laugh from the German.

The soldier pushed his machine up to Corky and gestured to him push his cycle alongside. In moments the two bikes were standing up leaning against each other in the manner that Corky had employed on so many club runs. And the German, too perhaps…

The German was not a large man and probably older than Corky, but any idea he might have had of "engaging enemy" seemed positively ludicrous. Two lost men in the desert were not going to influence the war by making it a personal affair.

Still with his heart thumping, Corky slowly slipped his hand into his greatcoat pocket and, watched closely by the German, pulled out a packet of Woodbines. A grin formed on the face of the German.

Warily, both men sat down. The German drew out a crumpled box of matches and moments later both men were drawing heavily on the cigarettes. The moon climbed higher and higher as the last clouds cleared and the planet Venus blazed in the western sky, hanging over the frontline from where there was still the periodic flash of gunfire. Then, from the direction of the British positions carne the sound of an old gramophone carried easily on the desert air. It was playing the Austrian carol, Silent Night, and as Corky looked at his strange companion, he the managed a grin. Neither man said anything, but as the record scratchily reached its end the two cyclists rose, silently shook hands and each mounted his cycle and rode towards his own lines.

It took Corky only a short time to find his repair unit again. He swung in, past the sentries and for the first time looked at his watch. It was a little more than thirty minutes into Christmas Day.

"Were you a’right out there on that thing?” The warrant officer seemed relieved to see him back. "Yeh, there was a bit of a sandstorm but that doesn’t stop a bike”, came Corky's reply. "There's nothing much going on out there anyway – it’s Christmas.”

John Whatmore is the author of the CTC Book of Cycling which was published in 1983.