A legal loophole means that parking in a mandatory cycle lane – breaking the Highway Code – isn't always illegal. We are working to fix the law in Scotland, as Jim Densham, our Campaigns and Policy Manager for Scotland, explains.

A cycle lane should be a safe space to ride a bike on the road, but many cycle lanes are far from safe because cars, vans and taxis are parking in them.

Swerving or moving out into traffic to avoid parked vehicles in cycle lanes can be an unnecessary danger.

Worse still, those enforcing this breach of the Highway Code are often powerless to act due to a legal loophole.

Rule 140 of the Highway Code states that: "You MUST NOT drive or park in a cycle lane marked by a solid white line during its times of operation".

When the Highway Code states that you ‘MUST NOT’ do something, that’s supposed to reflect laws which prohibit it. In other words, it’s a ‘MUST NOT’ in the Code because it’s an offence if you do.

You would think that’s quite simple and straightforward. It is, except that the law on cycle lanes does not currently back up the Highway Code as it usually would. Therefore if someone parks in a mandatory cycle lane (one marked by a solid white line), it’s unlikely they will be charged with an offence. 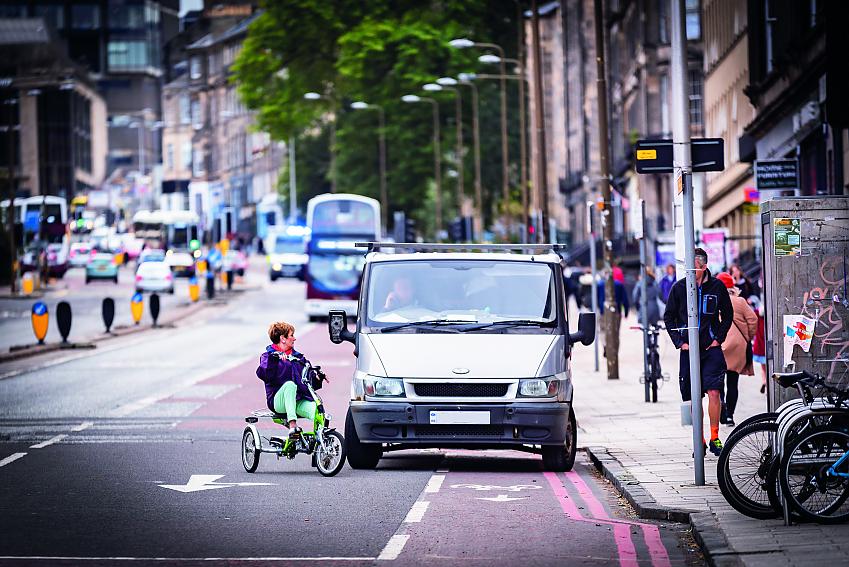 It all goes back to an underhand law change at Westminster in 2016, which omitted the word ‘parked’ from the list of activities not allowed in a mandatory cycle lane. For a full explanation see Cycling UK Policy Director Roger Geffen’s blog on the subject.

Without going into all the details, we now have a baffling situation where there are mandatory cycle lanes created in different years under differing laws. Some cycle lanes have yellow line parking restrictions but others don’t. Parking in some of these lanes is illegal, but in others it technically isn’t. Those who enforce the rules are as confused as you and I.

We now have a chance to fix the law in Scotland when MSPs vote on the Transport (Scotland) Bill next Wednesday (9 October). We have been working with Colin Smyth MSP on this issue and are supporting his amendment on ‘Parking in a Cycle Lane,’ which would reinstate the ban on parking into the law and realign it with the Highway Code.

You can help to make sure a majority of MSPs vote to fix the law.

Use our e-action to email your MSPs and ask them to vote for the amendment.

Have your say on Scotland’s Transport Strategy View