Spending time outdoors is invaluable to help escape everyday stresses and unwind. But for too many of us, natural spaces are difficult to get to. Sophie Gordon, Cycling UK campaigns officer, believes this needs to change.

Whenever I feel like things are getting on top of me, I go and search for somewhere green. Whether it’s climbing a hill, cycling over a moor or running along a woodland trail, getting out in nature refreshes my mind like nothing else. If I spot a free day coming up, I’ll be enthusiastically planning where to explore next.

As I don’t have a car, going further afield can sometimes prove a logistical challenge. Several occasions spring to mind when I’ve had to keep up the pace towards the end of the day to catch a train or bus back, as the next one was three hours later.

However, I’ve been fortunate to have lived close enough to various natural spaces to be able to reach them by public transport. If you live around Leicester, Grantham, Peterborough or Kettering on the other hand, your nearest National Park or Area of Outstanding Natural Beauty (AONB) could be over 45 miles away.

What’s more, people living in the most deprived areas are hardest hit by lack of access to natural spaces, according to analysis by countryside charity Campaign to Protect Rural England (CPRE). Almost half of the country’s most socially deprived areas are outside of the ‘accessible range’ – more than 15 miles away from a National Park or AONB. 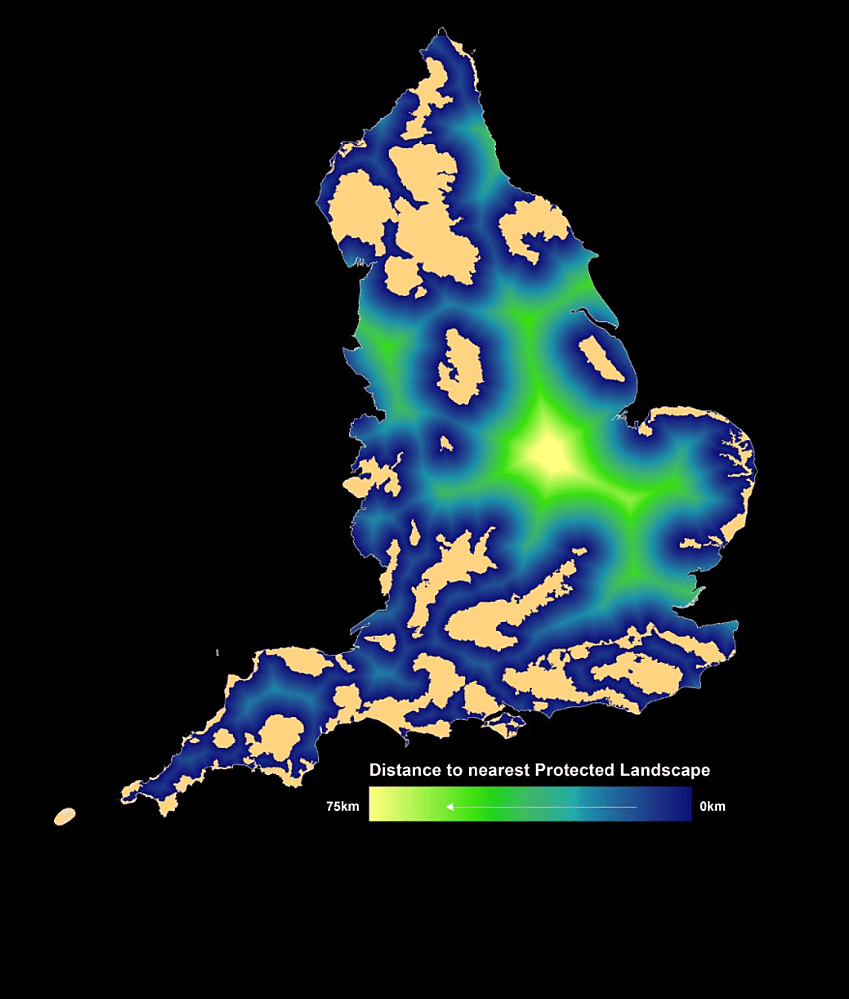 Parts of England are up to 75km away from a National Park or AONB. Image by Campaign to Protect Rural England

It might seem like an exaggeration to say that somewhere is inaccessible if it’s over 15 miles away – after all, that’s only around a half hour drive for the 93% of people who travel to National Parks by car.

But if we consider that outside of the ‘accessible range’ lie the majority of areas where less than half of all households own a car, it’s clear that people who are most reliant on public transport to reach our National Parks and AONBs are those who are likely to have to travel further to get there.

When the most beautiful parts of England’s countryside were given National Park status, or designated as AONBs, they were done so as a public good – so that everyone could enjoy the benefits. ... [But] a huge amount of people are currently missing out.

“When the most beautiful parts of England’s countryside were given National Park status, or designated as AONBs, they were done so as a public good – so that everyone could enjoy the benefits that access to them can bring. But the mapping demonstrates that a huge amount of people are currently missing out.”

I was lucky to grow up in a family that loves being outdoors. While at the time my 7-year-old self may not have appreciated being dragged up Lake District hills in the pouring rain in December (although let’s be honest, the time of year is irrelevant when it comes to rain in the Lakes), it planted a seed of love and appreciation for our natural landscapes that I am now incredibly grateful for.

Introducing friends to the Peak District or the Mendip Hills for the first time has brought me a lot of joy, but also made me realise that many people haven’t had the opportunities that I’ve had to discover some of the most beautiful parts of the country. 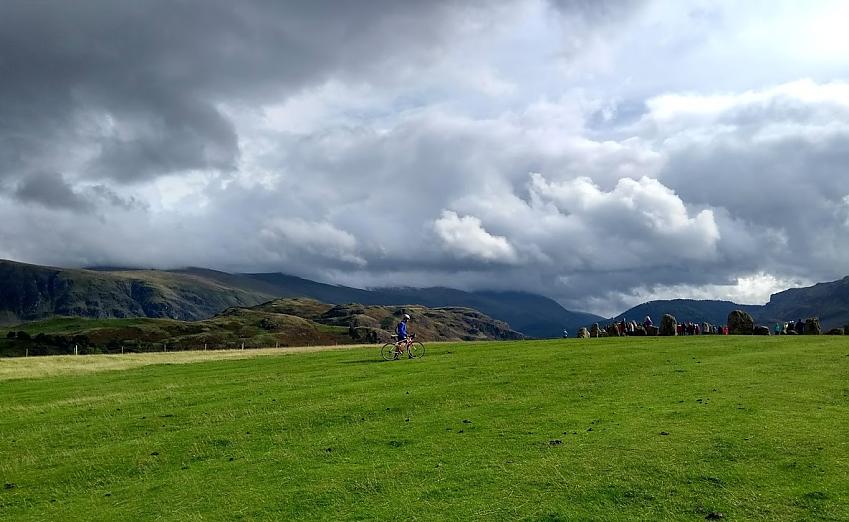 Taking time out to reconnect with the natural world makes us feel great. Studies suggest that spending time in green spaces can help us recover from stress, decrease blood pressure and even assist the healing process after surgery, according to the Centre for Research on Environment, Society and Health at Edinburgh and Glasgow universities.

9 out of 10 people who completed our Rides of Way survey agree that off-road cycling is important for their physical and mental health.

I think it’s only fair that everyone should able to enjoy these benefits by discovering our amazing National Parks and AONBs.

Proper investment in both public transport and safe cycling routes within National Parks would make them more attractive destinations for those who at the moment find them difficult to access.

“Multiple strains of research come back to the importance of people’s connection with the natural environment for their physical and mental health. National Parks represent some of our most precious landscapes and have a statutory duty to promote understanding and enjoyment of these special qualities - its quite shocking that seventy years down the line we are still trying to figure out how to achieve this.

“Proper investment in both public transport and safe cycling routes within National Parks would make them more attractive destinations for those who at the moment find them difficult to access.” 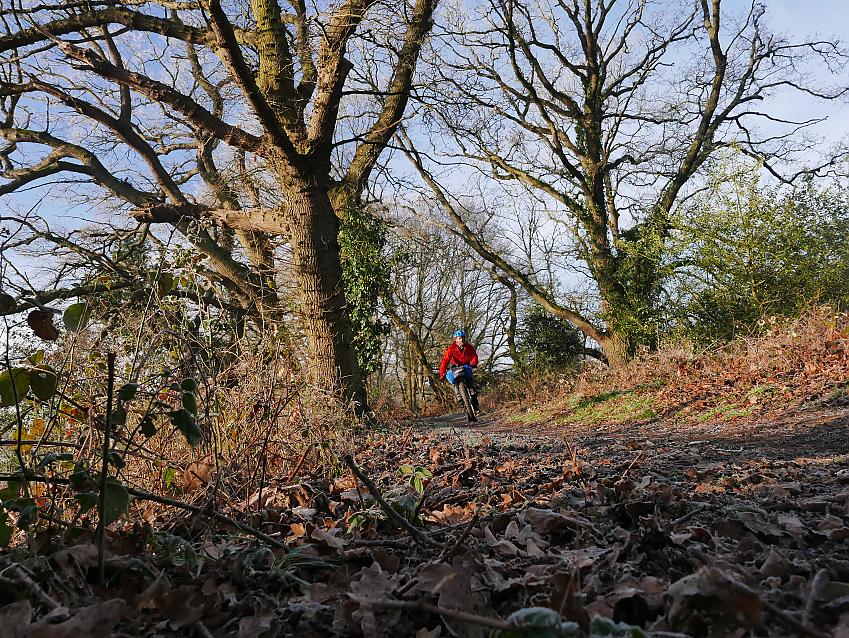 Winter riding in the Surrey Hills. Photo by Sam Jones

As Cycling UK set out in the Beyond the Green Belt vision, we want to see more people being able to get out and explore the countryside, whether or not they have access to a car.

Improving rural transport links is essential for this, and it won’t just benefit visitors – it will make life easier for rural residents too.

There are some great innovative schemes like the Dales Bus service in the Yorkshire Dales, but travelling with a bike is more likely to involve cycling from a local train station.

That’s why another important step is to make rural roads safer for cycling and walking, so everyone can connect more easily to the green spaces they love in our National Parks and AONBs. Quietening minor roads using lower speed limits and traffic calming measures would make it safer for local people to get to schools, shops and neighbouring villages on foot or by bike, and reduce traffic impacts on small villages.

Cycling UK is hoping that the current Landscapes Review of National Parks and AONBs will help address some of these issues and make sure that these spectacular landscapes are places for everyone to enjoy – just as they were designed to be when the first National Park was designated almost 70 years ago. 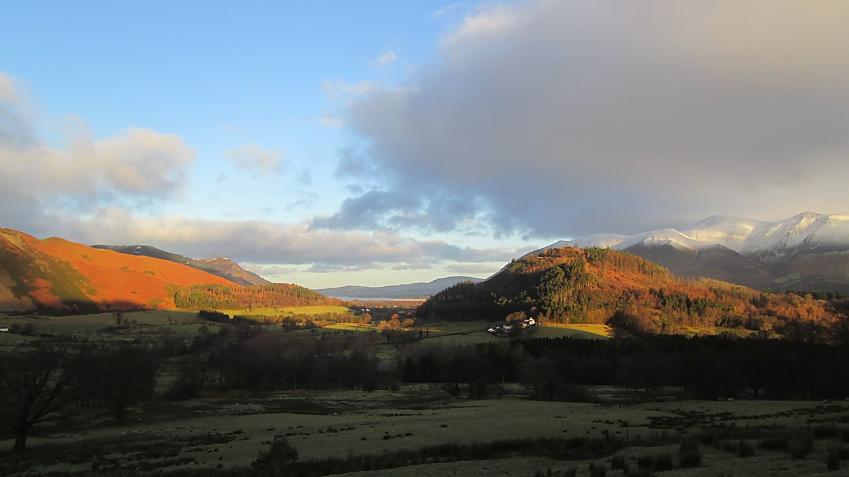 How to make cycling better for the next generation View