Elections, projections, cycling revolutions, and the morning after

Elections, projections, cycling revolutions, and the morning after

Ahead of council elections across Scotland, Wales and parts of England, and elections for the National Assembly in Northern Ireland, we set out a vision for cycling in all four nations. The morning after, our head of campaigns Duncan Dollimore looks at whether the message that it’s time to deliver, to get there with cycling and make it happen, is getting through

With rising fuel prices at the pumps, one of the messages in our election campaigns across all four nations has been that, for short journeys, there is an alternative to travelling by car, and that many of those trips could be walked or cycled. 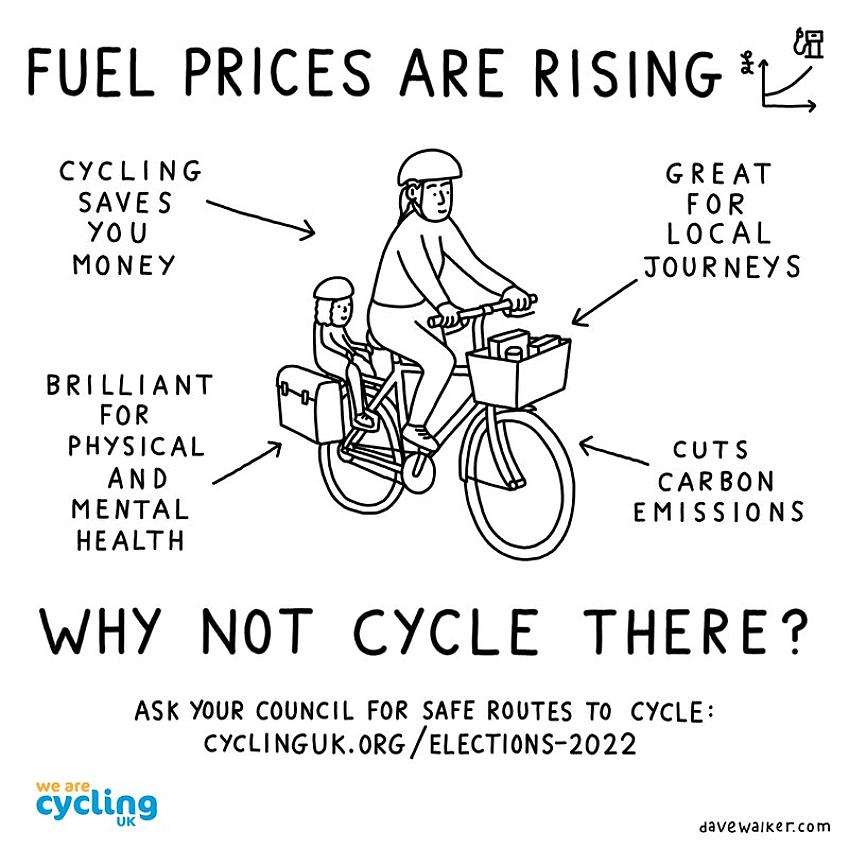 It has, however, been tough getting active travel on the agenda, particularly in council elections in England, Scotland and Wales, with 'partygate', inflation, the cost of living crisis and events abroad dominating the news cycle.

Nevertheless, we’ve still managed to secure commitments from candidates across the UK that they support our election manifestos, and if elected, will support investment in and delivery of the safe infrastructure needed to get there with cycling.

As I write this article, counting the votes hasn’t even started in Scotland, Wales and Northern Ireland, where 90 MLAs (Members of the Legislative Assembly) will be elected to the Northern Ireland Assembly. And in England, while some results have been confirmed, we’re still dealing with projections and predictions, and we haven’t yet cross-referenced who's been elected against which candidates pledged to support cycling.

So, the morning after, I’m not going to try and analyse what the results mean for cycling across the UK, because by early next week there’ll be a map on our election campaign page showing which pedalling politicians pledged where you live. But it is still worth reflecting on some of the highlights and opportunities form months of campaigning, and which messages seem to have resonated and where.

Invest in the future – Vote Bike

'Invest in the future' and 'vote bike', were messages that lit up the sky as we projected images onto various iconic Belfast sites, ahead of the Northern Ireland active travel hustings we hosted jointly with Sustrans. 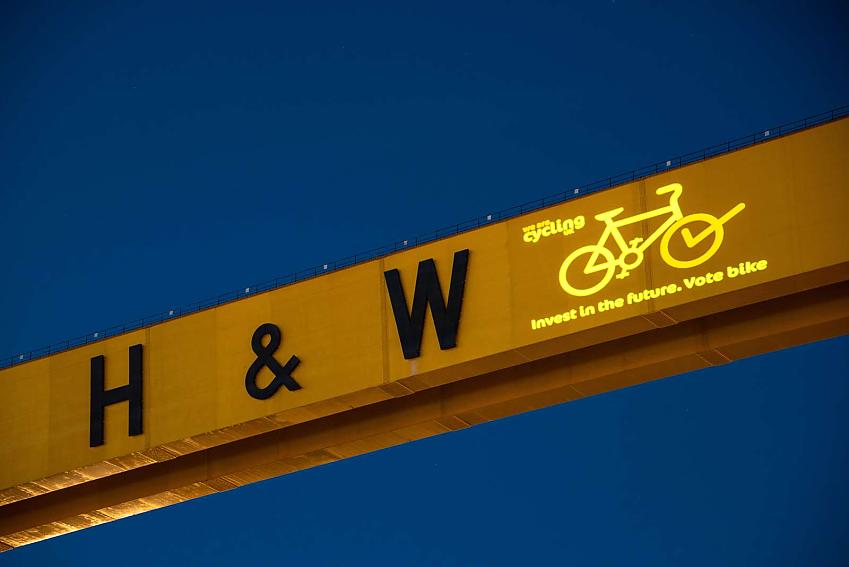 Invest in the future projection, Belfast

And highlighting the issues seemed to work, because cross-party consensus reigned at the hustings, with representatives from all six main parties in agreement that more investment in active travel is needed, more needs to be done to ensure this happens, and that holding the next Executive to account to prioritise both investment in and the delivery of schemes is imperative.

In Northern Ireland, responsibility for highways (and therefore most cycling infrastructure) doesn’t sit with councils but with the Department for Infrastructure, so commitments from those seeking election as MLAs is crucial.

And, incredibly, with the caveat that there’s still some counting to be done, the number and party distribution of pledges we’ve received suggests that around half of the 90 MLAs in the Assembly will have committed to a manifesto which includes spending 10% of the transport budget on cycling and walking.

People would cycle more and drive less, if ..

One frustration from our election campaigns has been that, with the media focussed on other things, some research we commissioned hasn’t grabbed the attention we wanted.

Our YouGov polling in Wales suggested that one in four adults in Wales would likely cycle more if streets were redesigned to be safer for pedestrians and cyclists, and one in five drive less frequently. Cross referencing those results against census data and the National Survey for Wales reveals that over half a million more adults in Wales would cycle if the streets were safer, with the likelihood to cycle more and drive less even higher among young people.

While this story wasn’t widely published, the evidence that people would cycle more and drive less if the conditions felt safer is a key one to highlight to all politicians, the naysayers and the media post-elections, with separate YouGov polling in Scotland also showing that this is also what most people want - we just need politicians to keep hearing why cycling matters. 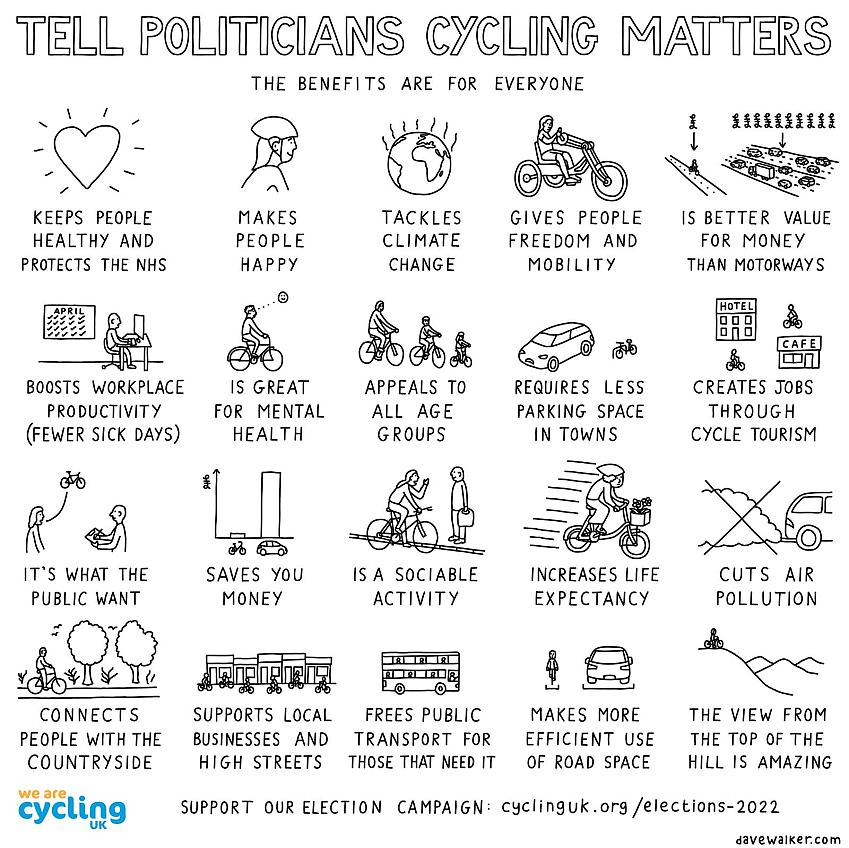 The message that now is the time to deliver was a core theme of all our election campaigns, or as our campaigns and policy manager in Scotland Jim Densham framed it -  it’s time for a cycling revolution.

The #TimeToDeliver message made it into a full page piece in the Holyrood Magazine, which admittedly may not be bedtime reading for all of us, but it is for MSPs (Members if the Scottish Parliament) and other politicians in Scotland, where our election messages seem to have been landing in the right places – with the decision-makers.

Getting there with cycling

Of course, elections are an opportunity to extract commitments from candidates before they are elected, but it’s vital to then hold them to account once they’re elected and to carry on engaging with them to make sure they realise why delivering for active travel matters, and that people want this. And that means politicians need to hear the local voice, not just from a national charity.

To make that easier, we’ve pulled together a report, ‘Getting there with cycling’, which is designed for councillors and other decision-makers. It sets out the overwhelmingly strong evidence that building cycling infrastructure has a positive impact on people's lives, is value for money and brings local benefits to communities, but in an accessible and readable format for the non-expert.

Making the case to politicians - locally

Thousands of people supported our election campaigns, signing our petitions and emailing candidates. Whether you’re one of them or not, if you want the decision-makers where you live to take cycling as a mode of transport seriously, and want politicians to follow through on their promises, a great start could be to just share our report with them – which might answer some of their questions, including the myths about whether cycle lanes cause congestion, won’t be used and aren’t popular.

And if you’re up for doing more, you can always take your councillor or other politician for a bike ride, and we’ve a helpful guide with tips if you’re thing about doing this.

It’s one of a number of ‘how to’ guides in our campaigner’s toolkit created for the elections, but which is equally relevant for campaigning and lobbying thereafter.

A huge thank you

We’ll update on the outcome of our elections campaigns in each nation next week, with details of which candidates supporting cycling have been elected where you live.

But for now, just a huge thank you.

It’s Cycling UK members who enable us to campaign, and members and supporters who amplify our message, so nothing we achieve though campaigning can be achieved without you – so again and once more, enormous thanks for supporting our election campaigns and, as always, if you want to get more involved in campaigning where you live, have a look at our Cycle Advocacy Network (CAN) to find out how we can support you to speak up for cycling.

England local elections 2022: what we stood for, how we did, and what’s next View