Cyclists were singled out for criticism in the Channel 5 programme

A programme on Channel 5 has provoked a furious reaction from cyclists, but Cycling UK took the decision not to comment publicly. Head of Communications, Adrian Wills, explains why.

There was a programme on Channel 5 this week all about cyclists.

I’m not going to name it for reasons that will become clear later.

It set out to illustrate some kind of perceived war between motorists and cyclists being waged on our roads.

It was irresponsible, ill-informed and designed to provoke anger and hatred on both sides.

And predictably social media went wild. Cyclists vented their fury in their droves, quite understandably.

Ratings were all that mattered, and every person who shared the trailer, or commented on the programme, I’m afraid, unwittingly played a part in giving Channel 5 free publicity.

Cycling UK took the conscious decision not to make comment. We didn’t put out a press release, or comment on Twitter.  And that raised some eyebrows.

After all, we are the cyclists’ champion. What were we doing about it?

But to make comment would have given the programme a legitimacy it didn’t deserve and provide the sort of publicity the Channel 5 PR teams could only have dreamed of.

It wasn’t a serious work of journalism – there was only one expert interviewed, the saint-like PC Mark Hodson from the West Midlands Road Harm Reduction Team. They didn’t seek to speak to any other authority such as Cycling UK, British Cycling or Sustrans. 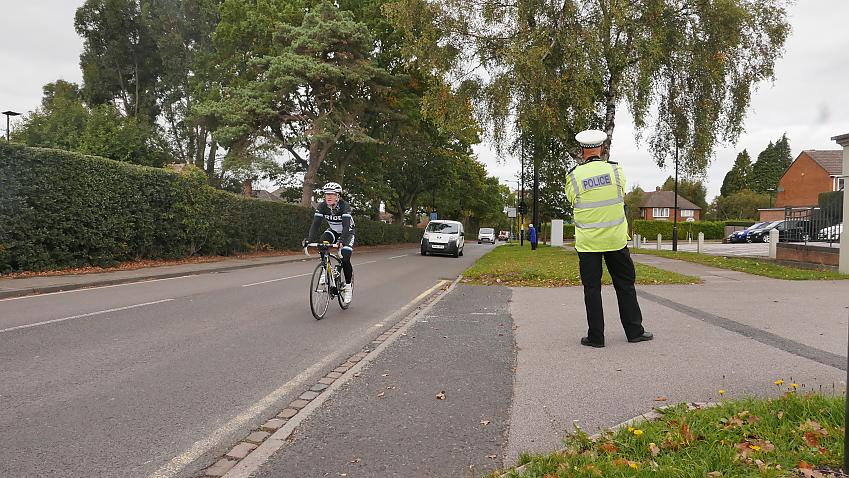 It wasn’t seeking to find answers to difficult questions. It had only one remit. To draw an audience.

Ratings were all that mattered, and every person who shared the trailer, or commented on the programme, I’m afraid, unwittingly played a part in giving Channel 5 free publicity.

It was best left alone to die in a ditch. Sadly, that didn’t happen.

My social media feeds have been awash with it over the last few days.

Fortunately, few media outlets have picked up on the film, and if you want to read an excellent response to the ‘arguments’ against cyclists the film portrayed, I suggest a quick read of Peter Walker’s article in the Guardian.

So what could we have done?

We couldn’t stop the programme being broadcast. There were no grounds to do so.

Nor can we realistically make a complaint to the broadcast watchdog, OFCOM as the programme had clearly been scrutinised by a lawyer in advance and didn’t breach any areas of the code.

So what are we going to do? Stop talking about the programme for a start and concentrate on the work we do that really will make a difference; talking about getting more women cycling, building up our community cycle clubs, and campaigning on issues that make affect us all, such as persuading the Government to spend more money on cycling infrastructure.

On the day the Channel 5 programme aired, a debate on funding was held in Parliament. It was a real chance to influence the Government’s future spending plans.

That’s what we should have all been making a noise about, not worrying about an irrelevant TV show. Sadly, the debate received precious little coverage on the day, and that was the biggest travesty of all.

You really need to be more understanding of the conflicts exposed.   They are real.   I am a pedestrian, cyclist and motorist and the conflicts are real.   No one should be above the law.   Until everyone behaves in an appropriate fashion these conflicts will arise.

Just by way of some explanation although I have indeed been kerbed by a motorist while I was riding my bike (not pleasant I can assure you) my only significant accident was when a juvenile cyclist rode across my path - result concussion and bent bike following my efforts to avoid a crash.   What did the hospital nurse say "Was I wearing a helmet?" as if it were my fault!   As a pedestrian I have been almost run down by cyclists riding on pavement and wrong way on one-way streets.

I think Cycling UK should be lobbying Channel 5 for a programme on cyclist deaths and injuries. For example, the recent publicity on the outrageous attempts by people in the Peak District to kill or maim MTB riders by putting traps on bridleways.

What all this. Illustrates is that tensions appear to be rising and the government need to step in with laws to update road traffic generally, but in particular to create  an environment where everyone is forced to “share the road” responsibly.

In a number of countries it's the norm to exempt cyclists from one-way restrictions. Britain's roads are designed in a way that either deters cycling or pits cyclists against other road users.

Some people who cycle do so in an irresponsible and even dangerous manner last week whilst walking in Derbyshire a group of MTB riders came past at speed on a downhill bridle path when we had children present in our group. The Ch 5 programme though sought deliberately and in a provocative manner to be divisive and mis-leading seeking to create a dangerous reaction in certain people who drive and could potentially go out and cause harm either by hitting someone or intimidating people so they then stop cycling. Being on television means you do not have any real right to reply or correct. The stance taken by Cycling UK is correct to deprive it of the publicity it seeks but I feel a letter to Ofcom is still due. The programme flies more than close to the guidelines and I belive transgresses them it is extremely distasteful in seeking to sow hatred and a harmful reaction within groups of people and that is clearly against the guidelines.

Ignoring the program seems to be missing an opportunity to leverage off it for the benefit of all.

Firstly use the actual filmed negative attitudes of drivers (e.g. passing too close to cyclists) in presentations to those who decide on the skills and attitudes needed to pass the driving test.  Seek to incorporate the same messages into any Government sponsored road safety initiatives.

Secondly at the same time develop ‘balanced’ good practice awareness amongst cyclists.  Publish this and present it to other parties such as Motoring and Horse Riding organisations to show that we encourage responsible road use amongst cyclists.  For example it is clearly inconsiderate to other road users to ride en-masse on narrow roads -  what is the objection to riding in say two’s single file with sufficient gaps to allow traffic to pass by in stages ?  In extreme situations our cycling group have even stopped on the side to allow a ‘scarce’ motorist to pass.  In case of doubt, whilst I believe in mutual respect between road users, I also believe in cycling ‘defensively’ and confidently so I am no stranger to cycling in a ‘commanding’ position e.g. to ensure I am not squeezed at ‘pinch points’ – I expect equal rights on the road.

Much of the UK suffers from lack of investment in highway maintenance resulting in potholes and dangerously deteriorated surfaces. The worst of this is generally just where a cyclist would choose to ride, well towards the left hand side, but not too close to the kerb. This means that cyclists are often forced to ride further towards the middle of the road where they don't really want to be, causing more inconvenience to motorists. So, whilst motorists must take care when passing cyclists and likewise cyclists should ride with due care and attention, the highways authorities have a major responsibility to address the increasingly worsening and dangerous state of our roads.