Diss is how you do it: Over a thousand take part in Diss Cyclathon

Diss is how you do it: Over a thousand take part in Diss Cyclathon

The Diss Cyclathon, which took place last Sunday 23 June, is a family-friendly event which last year won Cycling UK Best Event category at our Volunteer Awards. Cycling UK's Julie Rand went along with Alex Cuppleditch and Thomas Page from the Volunteering team to take part in the 100 mile ride and to find out why it's so popular with cyclists of all ages and abilities.

When you are looking to take part in a 100-mile sportive, perhaps for the very first time, there can be no better place than the beautiful, gently rolling scenery of south Norfolk. Setting out north-eastwards from the small market town of Diss at just after 8am on a gorgeous midsummer morning, we were soon riding on extraordinarily quiet lanes accompanied only by the sound of birdsong and swishing tyres as we headed into the lush landscape between the eight other towns that feature on the route.

The excellent signage, smooth road surfaces and gentle breeze meant we could keep up a fairly brisk pace and I couldn't believe it when we arrived at the first water stop in Loddon at around 11am to find that we'd already covered an amazing third of the route.

A quick stop to replenish our water bottles gave us the opportunity to chat to some of the other riders, including Jez pictured on the left below. (Jez subsequently joined Cycling UK as a result of our chance meeting en route, saying: "So that’s another positive on what was a good day in the saddle".) But we were soon off again, buoyed by the thought that it was only another 15 miles to the lunch stop at Long Stratton Leisure Centre. 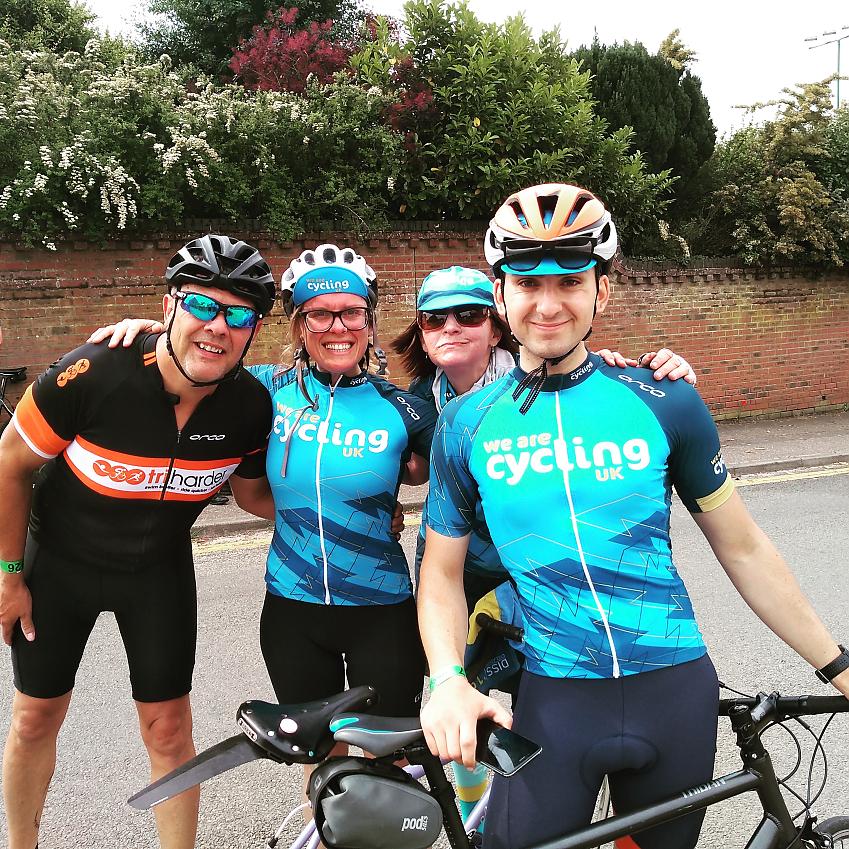 Among the many other riders out on the course, we encountered quite a few with inspiring stories of their journeys into cycling: a lady who hadn't left her house for several years because of her weight but who had started riding an exercise bike at home then taken part in the 25-mile ride last year and was now riding the 50-mile route.

Then a father and his young son who, despite a small tumble very early on, overtook us at about the 80-mile mark and were soon disappearing as specks on the horizon.

And, perhaps most impressive of all, four ex-military guys on hand cycles and recumbents, at least one of whom is a wheelchair user following an injury sustained in Afghanistan. After three years, he took up cycling and is now loving the fun, freedom and fresh air it provides.

Bring the community together in record number

Organised by Cycling UK members Alan Franks and Neil Collins for the fourth consecutive year, the Diss Cyclathon continues to build on its appeal, with record numbers taking part in 2019. Around 850 entered the sportive, with approximately 175 doing 100 miles, 400 doing 50 miles and 175 doing the 25 mile route. Another 330 entered the shorter family friendly 5 and 15-mile rides, half of whom were under 16 (and many under ten!).

The event is also now part of Cycling UK's Challenge Ride Series, which aims to encourage people from all backgrounds to take on a longer distance ride, with affordable entry fees and a free medal for all finishers.

"It’s amazing how cycling can bring the best out in a community.

Neil Collins, one of the organisers, said: "It’s amazing how cycling can bring the best out in a community. We’re thrilled how many riders of all ages and all abilities joined us for Diss Cyclathon and every single one rode with a smile on their face. The sunshine and beautiful Norfolk and Suffolk countryside didn’t hurt either!"

One of the many attractions of the day are the family activities on the park in the centre of Diss, which keep young and old entertained throughout the day, perhaps while waiting for riders to finish. Crafts, live bands, real ale, stalls and more bring visitors to the venue, whether they are actually cycling or not, helping raise awareness of the event and building on its great community spirit.

The last 25 miles proved to be the hardest as our small group had split up and we were battling a strong headwind all the way to the line but the miles flew by and before I knew it, I was back in Diss with a weighty Diss Cyclathon Challenge Ride medal around my neck and making a beeline for the food stalls.

After a large cup of tea and a vegan wrap, I was feeling very refreshed and looking forward to the barbeque in the evening at the nearby Cock Inn.

As well as enabling and encouraging hundreds of people to enjoy a fabulous day out riding their bikes, like last year, the event is expected to raise an amazing £10,000 for local and national charities. If you'd like to find out what it takes to organise such a great day out AND raise much-needed funds at the same time, Alan Franks explains on the right how the Diss Cyclathon has grown from small beginnings to such a successful event and if you think you'd like to put on your own Cyclathon next year, please get in touch with the Volunteering Team at Cycling UK.

Take up the Challenge

There are also plenty more chances to take part in a Challenge Ride this year, with events coming up in Devon, Wales, Cumbria, Hampshire and Hertfordshire before the series closes at the end of October.

Cycling UK member Alan Franks is a co-founder and organiser of the Diss Cyclathon, an annual fundraising event supported by several partners, including Cycling UK. Here he describes what is involved in setting up and running it.

In 2013 my wife and I moved to Diss in Norfolk, where the local arts and entertainment facility ‘The Corn Hall’ was under threat of closure. Being no strangers to the town, having lived in a nearby village for 34 years, we were keen to get involved and prevent this from happening.

I was given the task of helping with the fundraising, which, with input from the Heritage Lottery Fund, managed to generate over £3 million for what had become the Heritage Triangle project. As part of the project, an events team was formed and a number of events were proposed with the aim of encouraging more people to visit the town and use these facilities.

One of the proposed events was the Cyclathon and, being a cyclist and member of Diss CTC, I was seen as an obvious candidate to undertake the organisation of such an event.

I soon discovered that apart from giving it a name, no actual plans had been formulated. Notwithstanding that, and with no experience of organising anything of this sort, I set about the task of coming up with a plan. My first thought was to run an Audax along the lines of that already organised by Diss CTC from Garboldisham, a local village, or asking the organiser to move it into Diss. They were, however, not keen on this idea.

Another Cycling UK member, who was also a member of Diss Cycling Club, suggested running a sportive. He had and some experience in this area and gave me some helpful guidance. The first port of call was to present the idea to Diss CC and invite them to run it. Their initial concern was that it might not attract enough riders and could lose money. To alleviate their fears, I proposed that the events team would underwrite any loss and if a profit were generated, we would allow them to keep 50%.

Neil Collins, a member of Diss CC with excellent knowledge of cycling routes, stepped forward to organise the sportive and we thus had the centerpiece for the Cyclathon. Neil’s expertise and enthusiasm has proved to be invaluable. The 100, 50 and 25-mile routes he has devised have proved to be very popular with riders, many saying that they are the best of any sportive they have ridden.

In the first year, 2016, we attracted over 500 riders and made a healthy profit, all of which was donated to charity with the main recipient being East Anglian Air Ambulance (EAAA). Flushed with success, we immediately set about organising the 2017 event and set ourselves a target of 1000 riders that we again exceeded. Once again, we were able to make a generous donation to EAAA and other good causes locally.

What sets the Cyclathon apart from most other large cycling events is that it is not just a bike ride, it is a celebration of cycling and designed to appeal to everyone

What sets the Cyclathon apart from most other large cycling events is that it is not just a bike ride, it is a celebration of cycling and designed to appeal to everyone, starting with family rides of five, ten and 15 miles, up to the main sportive rides of 25, 50 and 100 miles, which are all fully signposted.

The event starts and finishes from the beautiful Mere Park in Diss, where we offer a wide range of support activities including children’s entertainment, live music and a variety of sideshows and catering stalls.

It is not surprising due to its popularity that local businesses have now stepped forward to sponsor the event, this year contributing over £4000.

Around the same time as the Cyclathon, the Corn Hall also staged some cycling-themed events with live theatre performances by Cycling UK members The Handlebards, 'the world's first cycling theatre company who cycle from event to event with all their sets, props and costumes'.

It just goes to show what can be achieved that from small beginnings.

We have now affiliated the Diss Cyclathon to Cycling UK and hope that they will work with us to promote the event to an even wider audience. Every penny generated goes back into the community to support good causes.

Join your group or club to Cycling UK

You can join your group to Cycling UK to benefit from our £10 million of Organisers' Liability cover and many other benefits, such as free publicity for your event via our UK Cycling Events Guide.