Cycling to school post-lockdown: it's now or never

There's huge potential to get kids cycling to school after lockdown - but governments need to act fast
By Keir Gallagher
31 August 2020 - 8:11am

Cycling to school post-lockdown: it's now or never

Parents know what's needed to get kids cycling to school - but do our politicians?

Plenty has been written over the past few months about the cycling boom triggered by lockdown, and for good reason. It’s been wonderful to see more families out cycling, and to speak to friends who had always felt cycling was too dangerous for them, but gave it a shot during lockdown and are now converted.

And, so far, although the roads are getting busier once again, it does seem that many of the new cyclists are keeping it up. Numbers are still higher than this time last year – although there’s been an understandable dip from the peak in the middle of lockdown when going for a cycle was one of a very small selection of activities you could choose from.

However, the question of whether this boom could be converted into a longer-term transition in transport choices was always going to be answered with the return of the commute, which accounts for a huge proportion of daily traffic. And, although most offices are still closed, schools are in the process of returning through the UK – so we’re about to find out just how effective local authorities and national governments have been in capitalising on this huge opportunity.

There’s no doubt our politicians want children cycling to school: “We are asking parents and students to plan for how they can travel to school on foot or by bike” said Gavin Williamson, England’s Education Secretary, last week. The Scottish Government’s advice for re-opening schools also included advice that “walking and cycling, scooting, wheeling etc should be strongly encouraged”. Similar statements were made Wales and Northern Ireland, and from countless local authority leaders.

However, how much they want it – and how much they’re willing to spend to make it happen – is less clear. Words like “encourage” and “promote” crop up repeatedly, but rapid interventions to create safe space for cycling to and from schools are less forthcoming.

Nonetheless, we have seen local authorities, with central government support, creating pop-up cycle lanes and limiting traffic on some residential roads, so we wanted to hear from parents directly as to whether their children would now be cycling to school for the first time, post-lockdown.

So, we’ve gone straight to the horse’s mouth and asked 175 parents from throughout the UK directly and – bearing in mind that these are already pro-cycling families – the results highlight some real positives, but show we’ve a long way to go.

As expected, 62% of parents said that their children cycled more – or started cycling for the first time – during lockdown. And, when it comes to the school run, it seems that we may indeed be seeing a shift – while 24% of parents surveyed said that their child cycled to school at least once a week pre-lockdown, 45% said they now expect to do the school run by bike at least once a week – a near doubling.

Parents and children should be encouraged to use other means of travelling to school for example, walking or cycling where it is safe and reasonable to do so

Now, we know that these are already very cycling friendly families – with 24% saying they already cycle the school run compared to between 1-2% of families in the rest of the UK, so we certainly won’t be seeing 45% of children cycling to school in the coming weeks. However, if this expected doubling in cycling was reflected across the wider population, that would nonetheless represent one of the biggest jumps in cycling to school in decades.

Sadly, that’s where the good news ends. Although 89% of parents said they’d like their children to cycle to school, just 21% said they felt the roads were safe enough.

Peter Weir, Northern Ireland’s Education Secretary, recently said that “Parents and children should be encouraged to use other means of travelling to school for example, walking or cycling where it is safe and reasonable to do so”. But despite clearly being aware that safety remains the key barrier to cycling, there was no suggestion that action would be taken to address it.

And although the solution seems to endlessly evade politicians, it’s not surprising that the surveyed parents were near unanimous in identifying which single measure would encourage their children to cycle to school: 88% wanted to see protected cycle routes to and from schools. 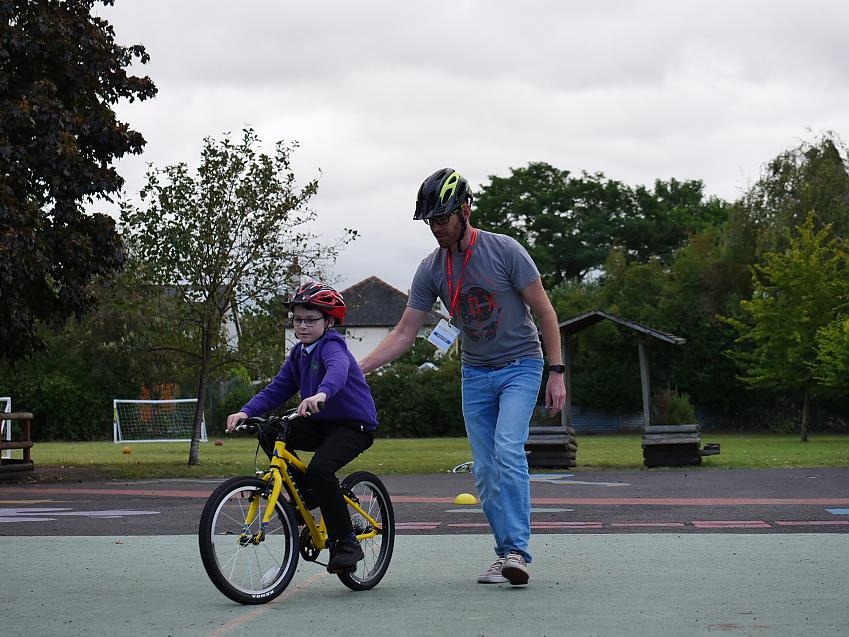 Over the coming weeks and months, we’ll get a better picture of just exactly what’s happening to the school run – and it’s more than likely this will set the pattern for the return to the commute to work too. However, the early indicators suggest that there’s still time for local authorities and central government to capitalise on the enthusiasm for cycling seen during lockdown – but they’ll have to act fast.

10 tips for cycling to school View

End the school run menace and get kids back on their bikes, Cycling UK urges as Bike to School Week launches View

Increase in congestion would cost everyone in the UK £2,000 a year, charity warns View

Back to school after lockdown: Cycling UK’s guide to cycling for the school run View
Cycling UK continues to support the UK to cycle
This remains true during this difficult period with the ongoing threat of coronavirus Covid-19
Read our latest advice on cycling
Join Cycling UK to help us change lives and communities through cycling
Membership gives you peace of mind insurance, discounts in cycle shops, rides & routes
Join now