The Ridgeway National Trail follows an ancient route that runs for 87 miles through the Chilterns and the North Wessex Downs. Currently only the western half is open to cyclists, but change is in the pipeline, as Cycling UK’s off-road campaigns officer Sophie Gordon explains.

How do you use the Ridgeway? Take the survey

Steeped in history, the Ridgeway is often described as Britain’s oldest road, used by prehistoric travellers and herders. Crossing some of England’s finest chalk downland and grassland, hills and valleys, and woodlands. The trail passes by archaeological wonders such as Stone Age long barrows, Iron Age forts, and the famous white horses cut into the chalk hillsides.

The western half of the route, from Avebury to Goring-on-Thames, uses rights of way open to cyclists, so you can pedal freely along. Past Goring however, there are sections of footpath, which cyclists don’t have a right to use. This frustrates the dream for many of being able to ride the whole length of the National Trail. 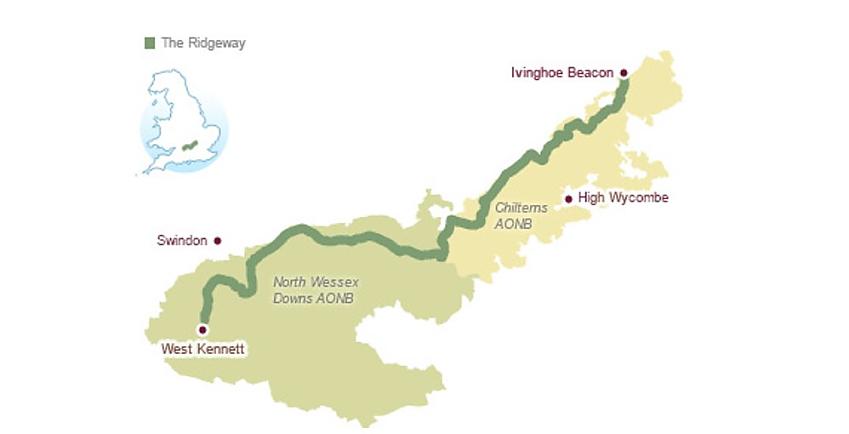 We know there is a demand for long-distance off-road trails that can be ridden from end to end.

Cycling UK’s Rides of Way survey of over 11,000 off-road riders found that almost a fifth had ridden the South Downs Way and 14% had ridden the Pennine Bridleway, the two National Trails that are fully open to cyclists.

12% of respondents had ridden the available half of the Ridgeway, and a further 35% said they want to in future. 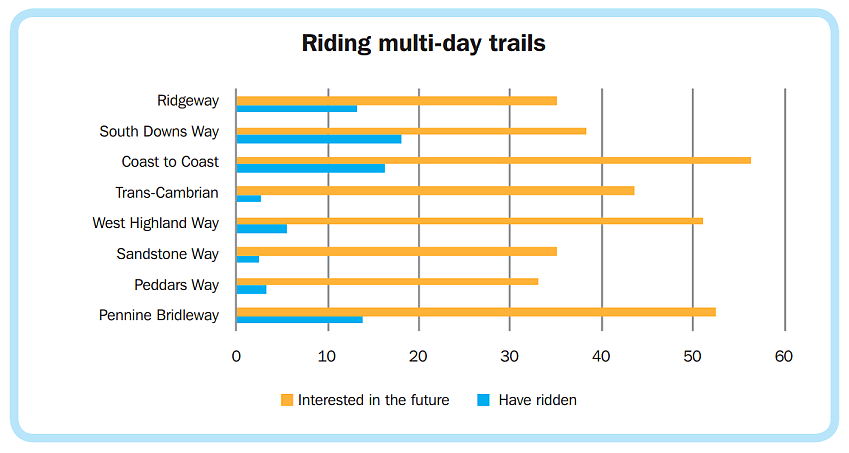 Recognising this demand, Cycling UK, alongside British Horse Society (BHS), has been working closely with the Ridgeway Partnership to begin the process of developing a Ridgeway Riding Route.

The project involves surveying routes around the footpath stretches of the National Trail in the Chilterns and talking to landowners along these routes. There are also plans to install cycle parking and horse hitching posts at resting points, and it some places there may be a need to look at options to create new routes or upgrade footpaths to bridleway or restricted byway status.

Over the past couple of years, Cycling UK and BHS (working with the Local Access Forum for the Ridgeway) have been identifying and mapping possible alternative routes and researching their historic status. We have written to local authorities and Highways England regarding safety improvements on road crossing sections.

Now the Ridgeway Partnership wants to hear from riders. Do you know any great riding routes around the Chilterns half of the Ridgeway? What would encourage you, or friends and family, to enjoy more cycling on and around the Ridgeway? Take the survey.

Ridgeway National Trail officer Sarah Wright explains: “We need to find out if it is worth us trying to design a riding route so that The Ridgeway National Trail caters for cyclists and horse riders as much as it does for walkers. We think it is a great idea but we need the public to confirm that through the survey!

"The vision for these ‘long-distance trails’ was set out in a 1947 report by Arthur Hobhouse as “continuous routes which will enable walkers and riders to travel the length and breadth of the [National] Parks, moving as little as possible on the motor roads”.

Kieran Foster, Cycling UK’s national off-road advisor said "Cycling UK’s 2017 off-road survey showed clear demand for these types of longer-distance off-road opportunities, and opening these National Trails up to more people would not only fulfil the vision of 70 years ago, but support the current Government’s stated desire to encourage more people to enjoy the countryside and connect with the natural environment".

As a first step towards achieving this vision, Cycling UK helped to create a riders’ route for the North Downs Way.

In summer 2019, we launched the Great North Trail, an 800-mile route from the start of the Pennine Bridleway in Derbyshire all the way to Cape Wrath and John o’ Groats on the north coast of Scotland.

In the future, we have plans for a 200-mile loop around the heart of historic England, taking in Winchester, Salisbury, Stonehenge and Avebury stone circles. This trail will link up the National Trails of the South Downs Way, North Downs Way and, once completed, the Ridgeway Riding Route – opening up hundreds of miles of connected trails for people to explore, whether on foot, on a bike or on horseback.

Aston Hill and Wendover Woods are a mountain bike hotspot in the Chiltern Hills. The Ridgeway National Trail passes nearby, so there’s a great opportunity to offer a signed off-road route for cyclists to explore the wider area… it will present miles and miles of off road cycling through scenic countryside.

Want to know more about the history of the Ridgeway? Take a look at this public information video from the 1970s which imagines its origins...

Have you ridden on the Ridgeway National Trail? The Ridgeway Partnership want to hear your views and ideas to make the best possible riding route.

70 years on: Has the National Parks Act achieved its purpose? View