Could more trails open up in England?

Could we see more trails opening up for cycling in England? Photo Joolze Dymond/Cycling UK
By kieranfoster
Wednesday, 25 September 2019

Could more trails open up in England?

Last Saturday (21 September 2019). the Government published the results of its ‘Landscapes Review of the future of National Parks and Areas of Outstanding Natural Beauty (AONBs). Cycling UK off-road policy advisor, Kieran Foster, delves into the detail and questions whether this could be the change to English access policy that would allow more off-road riding.

Known as the ‘Glover Review (it was led by the writer Julian Glover), the Landscapes Review follows last autumn's consultation, which considered whether it is now time to update the 70 year old legislation on England's landscape.

This legislation was designed to protect much of our countryside from inappropriate development, but also to provide much of the framework for long-distance trails, such as the Pennine Way, and also later developments such as open access laws.

Much of this once-revolutionary legislation captured the post-war zeal for change in order to build a land fit for returning heroes.

It was born of a genuine desire to encourage people out into the countryside, away from the factories and polluted cities (in a society still largely dependent on coal for its energy needs, of course), where they could enjoy the physical and mental health benefits of fresh air and green open space.

In the decades since we have witnessed changes in everything from agriculture to transport and work that have left a society barely recognisable to our forebears - and there seems little doubt that along the way some of this vision has been lost.

The Glover Review has most certainly restated the importance of those principles and sought to reform and improve a number of aspects of the management of National Parks and Areas of Outstanding Natural Beauty (AONBs).

There seems little logic across the country to the nature of rights of way at the moment...it is all the more important that fair access is given to all.

The findings of this most recent review are, at least on initial analysis, largely positive, and shows the importance of organisations like Cycling UK engaging fully in the detailed process of consultation and review.

Cycling UK's response to the consultation covered a number of fairly obscure (in the grand scheme of this review) policy points, some of which have, we are pleased to say, been picked up on in the review, and which genuinely bode well for the future.

Crucially, the report has stated that the rules governing open access under the Countryside and Rights of Way (CRoW) Act should be looked at again, and, in principle, should be opened up to a wider variety of users (cyclists, horse-riders, canoeists cavers etc.).

The report also specifically discusses the inequity in rights of way provision: “...there seems little logic across the country to the nature of rights of way at the moment. Cumbria and Shropshire are rich in bridlepaths. In some other places, almost all routes are only open to walkers not horse riders or cyclists. As even rural roads become busier and more dangerous, it is all the more important that fair access is given to all.” 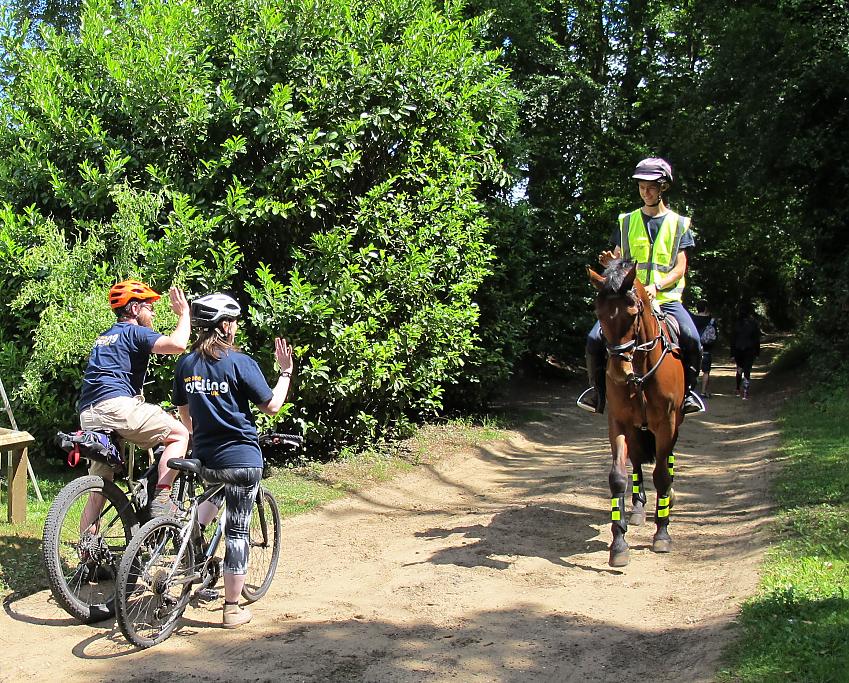 Given the access reforms that are currently under consideration in Wales (thanks in large part to our Trails for Wales campaign), Cycling UK hopes the Glover review's comments lead to a willingness to explore substantive change in England too - with the prospect of a ‘Trails for England’ campaign being very close.

A number of other points of reform were also highlighted in the review, for example that not all National Parks are responsible for rights of way management within their area, and there has been a clear recommendation that this should change.

Additionally, the management of National Trails, our nations flagship long-distance routes, is likely to be brought into the fold of National Park and AONB management, which undoubtedly bodes well for their resourcing and strategic importance.

Perhaps we will finally begin to see the delivery of the original goal as outlined in 1949's Hobhouse review, that these routes would act as: “...long distance paths and bridleways in and between National Parks and Conservation Areas. There should be continuous routes which will enable walkers and riders to travel the length and breadth of the Parks, moving as little as possible on the motor roads."

The Great North Trail, recently developed by Cycling UK, shows the potential for this network to expand, and we hope will act as an important step in moving forward the completion of the Pennine Bridleway.

Finally, of real interest, is a very clear vision for a shift towards more sustainable tourism within National Parks.

All of us should be excited about the broad vision for change laid out in this report.

The report found the amount of tourism traffic was, in some places, destroying the very tranquillity and beauty that made these places so attractive to visitors. Bold proposals for a rebalance include better cycling provision, and that initially in the Lake District National Park e-bikes and cycle racks on buses should be trialled.

Other than this, much of the report focused on the need for the National Parks to be more representative of, and welcoming for, wider society. It also specifically calls for reform of governance structures in order to better reflect the social and economic diversity of the communities who both live in, and visit, National Parks.

All of us should be excited about the broad vision for change laid out in this report. Cycling UK will be pushing for rapid action!

Agricultural subsidies and why countryside access is a public good View

70 years on: Has the National Parks Act achieved its purpose? View
Cycling UK continues to support the UK to cycle
This remains true during this difficult period with the ongoing threat of coronavirus Covid-19
Read our latest advice on cycling
Join Cycling UK to help us change lives and communities through cycling
Membership gives you peace of mind insurance, discounts in cycle shops, rides & routes
Join now