Emily in Bristol
By Emily Chappell
Friday, 29 May 2020

An opportunity for LGBT cyclists and their allies to come together (virtually), to celebrate the gains that have already been made, and to make a clear and colourful statement that everyone is welcome in cycling, no matter who they love or how they identify.

On Saturday 13 June, Cycling UK with be partnering with LGBT cycling group PRIDE OUT, to mark Pride Month with a day of socially distanced bike rides, under the hashtag #OurPrideRide. 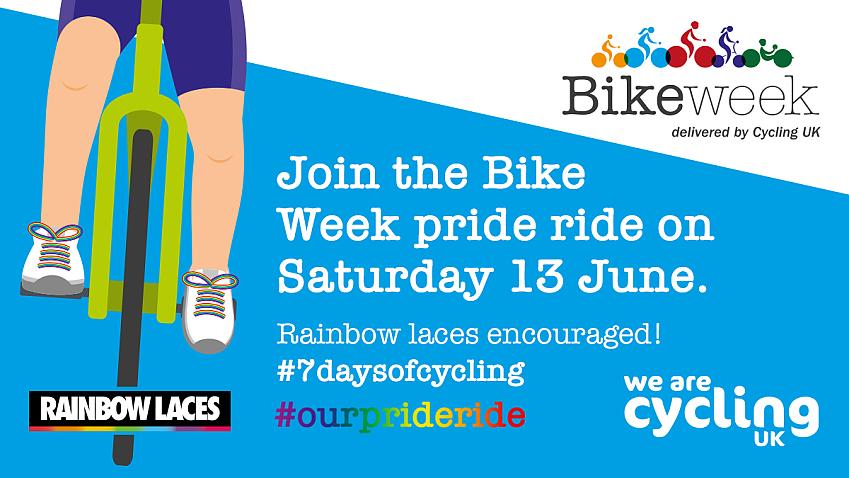 The idea for this came up in conversation with various people in the cycling industry, and as soon as it took shape I knew I should have done it years ago, and guiltily wondered what had taken me so long.

One of my lightbulb moments happened this time last year, when I realised I was living in a future I used to dream of. I got talking to a taxi driver on the way to an event, and at one point during the conversation – I can’t remember the context – he asked if I had “a husband …or wife”, and then carried on with what he was saying as though it was no big deal. Which to many of us now, it really isn’t.

When I first came out, almost 20 years ago, the world was different, and I felt I was negotiating an endless minefield of potential reactions.

What if they take it badly?

“Do I want to come out to this person?"

“What if she’s disgusted?

“What if he gets creepy?

“What if it gets awkward?

“What if they tell me they don’t have a problem with it, but they don’t understand why gay people have to go around proclaiming it, when they don’t feel the need to tell everyone they’re straight?

“What if it ruins this new friendship?

“But then again, it’s weird to be friends with someone, and for them not to know this about me.

“Should I find a way to drop it subtly into the conversation, or should I make it more of an announcement?”

And so on. I can’t tell you what a relief it is, in 2020, to live in a world where no one really cares any more, where they don’t assume you’re straight and have to be awkwardly corrected, where I don’t have to worry that coming out will lead to hostility or rejection.

But not everyone has got there yet – I’m one of the lucky ones. A lot of people still deal with homophobia as a regular part of their life – from their family, social circle, colleagues, team-mates or religious community.

Despite our legal equality, LGBT people are still murdered, and take their own lives, on a distressingly regular basis.

Although things have been getting better and better, many of those who lived through the unenlightened decades of the late 20th century will still be battling with the psychological hangover of having come of age in a virulently homophobic society. Secrecy and suspicion can take a while to unlearn.

For a few years I’ve been revelling in the freedom of my post-homophobia bubble; of being a gay person in the world without it having to matter, or mean anything.

I can’t tell you what a relief it is, in 2020, to live in a world where no one really cares any more, where they don’t assume you’re straight and have to be awkwardly corrected, where I don’t have to worry that coming out will lead to hostility or rejection

But now I realise that it’s more important than ever for me to be out – to be openly, visibly gay, so that anyone who’s still struggling will see that we’re here, that it’s OK, that they aren’t the only one, and that it’s safe to be themselves.

You’re probably wondering how this is relevant to cycling, and why it even concerns you. Surely there are too few gay people in cycling for this to matter? No one can name a single gay male pro cyclist, and most cycling clubs are overwhelmingly straight. Maybe gay people have better things to do than be part of the cycling community?

Or could it be that they are here, but just don’t feel comfortable being out? Or, worse still, that the apparent straightness of the bike world has put them off, and they’re either riding on their own, or have drifted out of cycling entirely?

I know I spent a few years dipping in and out of cycling clubs, grimly enduring the blokey atmosphere, wincing through the occasional sexist and homophobic jokes, and then going back to doing my own thing.

It wasn’t even that I felt unwelcome – these were good people, and I’m sure if they realised they had a gay in their midst they would have done their best to make amends. It just wasn’t much fun being the odd one out. I didn’t feel drawn to repeat the experience the following Saturday.

So I stopped trying to belong – but I’ve found, more and more, that cycling now belongs to me (as it belongs to all of us, though most people I know still worry that they’re not a ‘real’ cyclist). I now lead rides full of the sort of grey-haired men who used to intimidate me, and in so doing I’ve discovered that the herd of straight white males isn’t as straight as I thought – or as male, for that matter.

A few months ago, during a pre-ride briefing, I singled out homophobic comments as an example of bad behaviour that I wouldn’t tolerate. Afterwards, one of the riders took me aside, and told me he really appreciated that I had made that clear. Over the course of the next few days, he started to tell me about his son, who was gay, who was doing well in his career, and of whom he was overwhelmingly proud.

I stopped trying to belong – but I’ve found, more and more, that cycling now belongs to me.

On another ride I happened to have a rainbow ribbon on my bike, and a person I had initially taken to be just another MAMIL told me all about the transition she was embarking on, her hopes for the future, and how she wished she had had the courage to do this years ago.

Having a ride leader who was gay – or at least very obviously cool with it – helped these people to share things they would otherwise have kept hidden from the rest of us. By being more authentically themselves, they were more fully part of the group. All it takes is some small indication that LGBT people are welcome – that they’re normal, that they’re expected, that they’re already part of the gang.

You don’t have to be an out gay cyclist to make a difference - most of us have family and friends that fall somewhere on the LGBT spectrum. Hearing you talk about your daughter’s wife, or your brother’s boyfriend, or your best friend’s new pronouns, will be immensely helpful to Colin, whose son has just come out, and who’s worried about what his friends will think. Or to Betty, who doesn’t yet know that she’ll fall in love with a woman in two years’ time, and for whom this will be one of many small things that help her feel safe enough to let it happen.

This is why we’d love you to take part in #OurPrideRide, even if you’re straight. As well as being a celebration of Pride Month, and of how far we’ve come over the last few decades, it’s an opportunity for all of us to make a very clear statement that LGBT people are welcome in cycling – that we belong here, and that homophobia doesn’t.

Do it for all your future riding buddies, who will perhaps now pluck up the courage to come out and join the fun.

She has cycled all over the world, from Wales to Japan, from Anchorage to Seattle, and in between her adventures, works as a cycle courier in London, England.

She has written many times for Cycling UK, has appeared on Woman's Hour, Robert Elms, Guardian Books, Pro Women's Cycling podcast, and her work has been reviewed by the likes of the Guardian, Spectator, and London Cyclist.

When she's not riding, breaking, fixing or talking about bikes, she's cooking, reading, and fantasising about taking up new sports.