It was not until we were in Tuscany, cycling amongst the vines on the crushed white limestone of a strada bianca, that I realised the double meaning of this tour’s appellation.

These white roads have been used by generations of Tuscan farmers, tending their vineyards and to transport their grapes and wine. They are far more than a tourist trail – although they do also serve that purpose. And now 24 members on a CTC Tour (plus another 20 who started the week before) were trundling along them on mountain bikes, folding bikes, road bikes, touring bikes, old battered bikes, new shiny bikes, steel bikes, titanium bikes, with dropped bars, flat bars, wide knobbly tyres, skinny slick tyres and treaded touring tyres... all setting off to see the well-known and the lesser-known sights and experiences that this part of Italy has to offer.

We started from Pisa, the Puccini cycle route taking us past the leaning tower, which when you see it with your own eyes is extremely dramatic – its white marble eye-dazzingly brilliant against an azure sky. It was amusing to watch almost every single tourist pretending to prop it up for a photo. The overall impression was of badly-coordinated mass tai-chi! 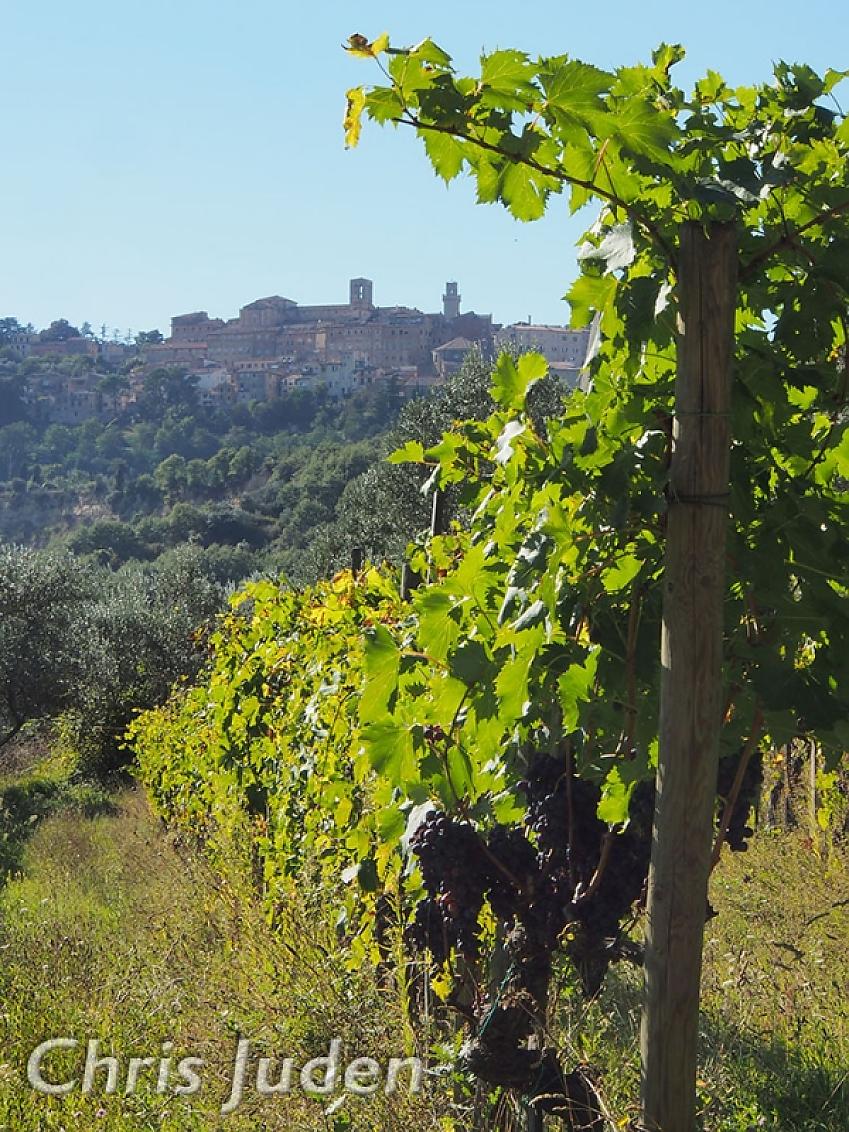 In order to navigate, should it be necessary, our route sheets were extremely comprehensive. Not only did we have detailed directions, elevation profiles, off-road distances and sight-seeing information, but we also had notes on the particular wine growing area we were passing through, with helpful suggestions as to the wine we might like to try with dinner that evening. Carmignano, Montalbano, Brunello di Montalcino, Vino Nobile di Montepulciano – the names rolled around the tongue almost as smoothly as the wine! I am convinced that the Italians (like many other wine producing nations) keep the best for themselves and export the lesser quality wines. Aided by two organised tasting sessions, we enjoyed discovering that there were excellent Italian wines, a class above bog-standard Chianti and the ubiquitous Pinot Grigio (give Vernaccia di San Gigmignano a try for a refreshing change).

We could smell the scents of bruised thyme under our wheels, freshly crushed grapes near the vineyards and in the woods: wild mushrooms."
Penny Church
Tour participant

Italy is a densely populated country (more like busy Britain than quiet France), but our leader, Chris Juden, had nevertheless found routes that as far as possible avoided main roads and were for the most part out in the countryside. Here we could smell the scents of bruised thyme under our wheels, freshly crushed grapes near the vineyards and in the woods: wild mushrooms. There was surprisingly little bird song – perhaps due to habitat destruction or the continental 'sport' of shooting songbirds. In spite of their fearsome reputation, the Italian drivers were on the whole well-behaved towards our motley peleton, although predictably it was a white van that caused the only close shave that I was aware of. 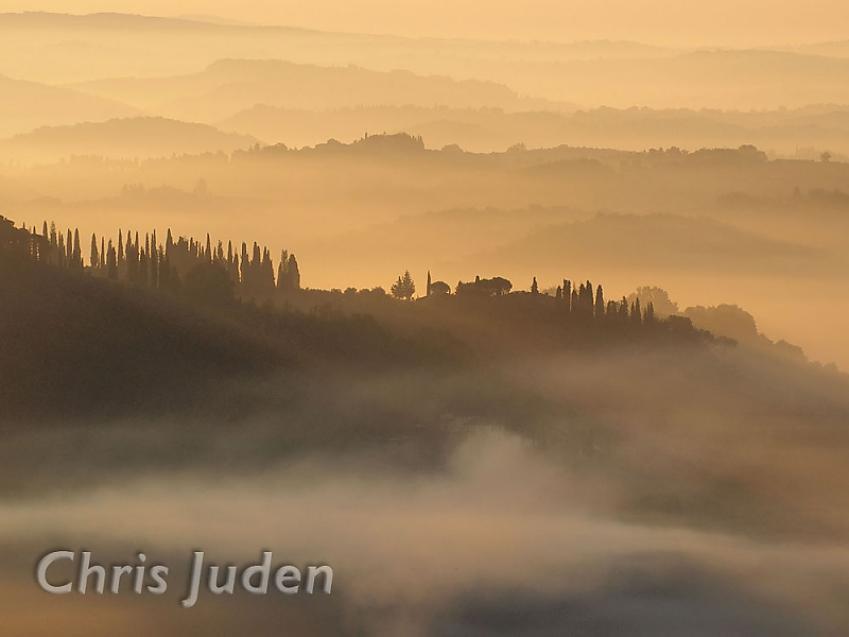 Tuscany is hilly and for defensive reasons most of the towns are built on hilltops. Despite clever route planning there was no avoiding those hills. The rewards however, were beautiful views of rolling countryside covered in vineyards complete with the tall spears of cypress trees dotting the landscape. As is usual in a group this size there were a range of cycling abilities – some could fly up hills, some could zoom down them; some revelled in the rough stuff whilst some delighted in smooth tarmac; some enjoyed cycling at the front of the group whilst others were happy to noodle along chatting in the 'grupetto'. The common factor was that we all enjoyed exploring by bicycle.

As exhilarating as cycling may be, through vineyards in the sunshine and olive groves under clear blue skies, you can’t really travel to Tuscany without at least visiting some of the major cities, to see the cultural sights. 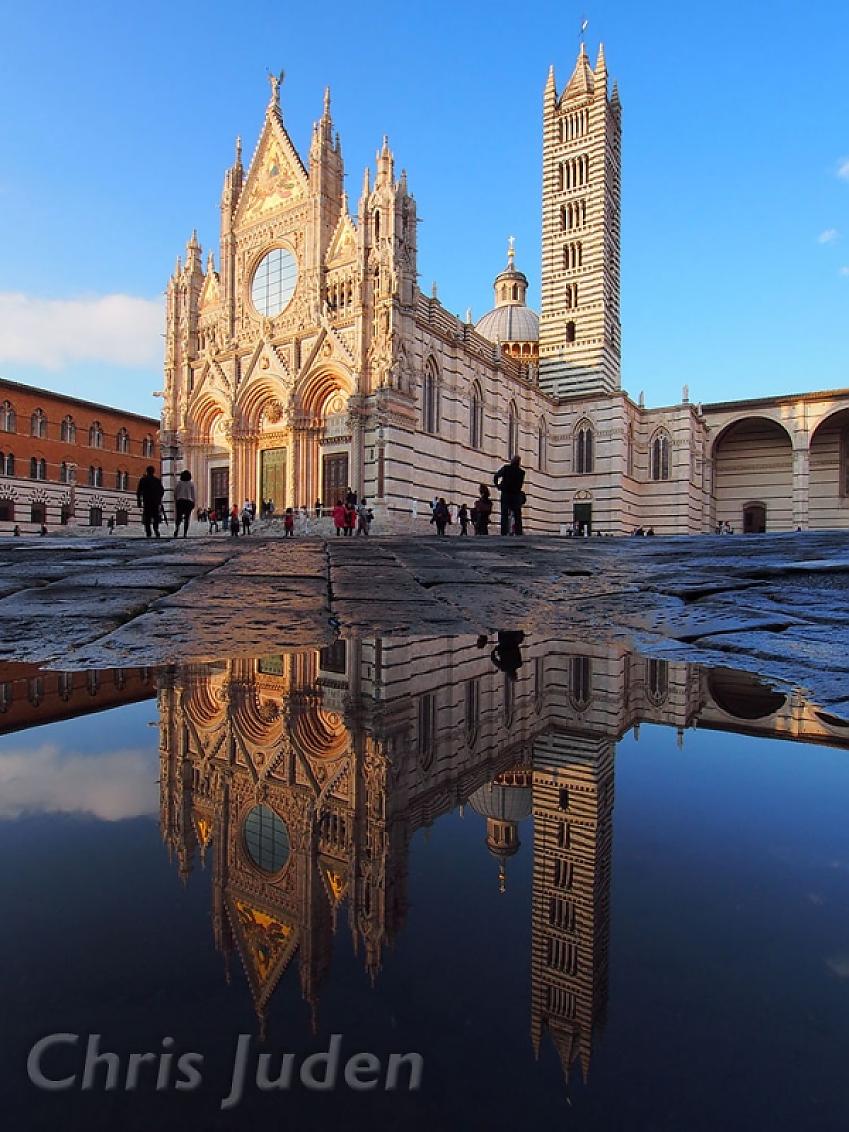 Our itinerary gave us free days in both Florence and Siena, which allowed us at least to scratch the surface of what there is to see – the Cathedrals, the bell towers, the museums. Simply wandering the streets was fascinating looking at how buildings had been remodelled with different arches, doors and windows over the centuries. It would take more space than I have available to describe what we saw, but I finally fulfilled a wish I’d had since sixth form art history classes: to see the vibrant Renaissance paintings in the Uffizi gallery.

The advantage of arriving in these popular cities by bike was that we were able to sneak right into their centres via cycle paths and ancient byways, without having to deal with ring roads and traffic or worry about parking. Chris’s unique “human signpost” system ensured that nobody got lost and everyone stayed safe, because we weren’t trying to look at maps or GPS. As you can imagine, a group of 24 cyclists is rather an obstacle for city traffic and it would take us ages to get anywhere if we continually had to stop to regroup at every major junction. So where there was any doubt about which way to go, the person behind the leader stopped and indicated the route. At the next junction, the next-in-line stopped and so on. We soon had a very slick routine going. As the designated back marker reached each “signpost”: they re-joined the back of the group. This usually works very smoothly. It’s only in the case of a mechanical that the “signpost” sometimes has a longer than usual wait. 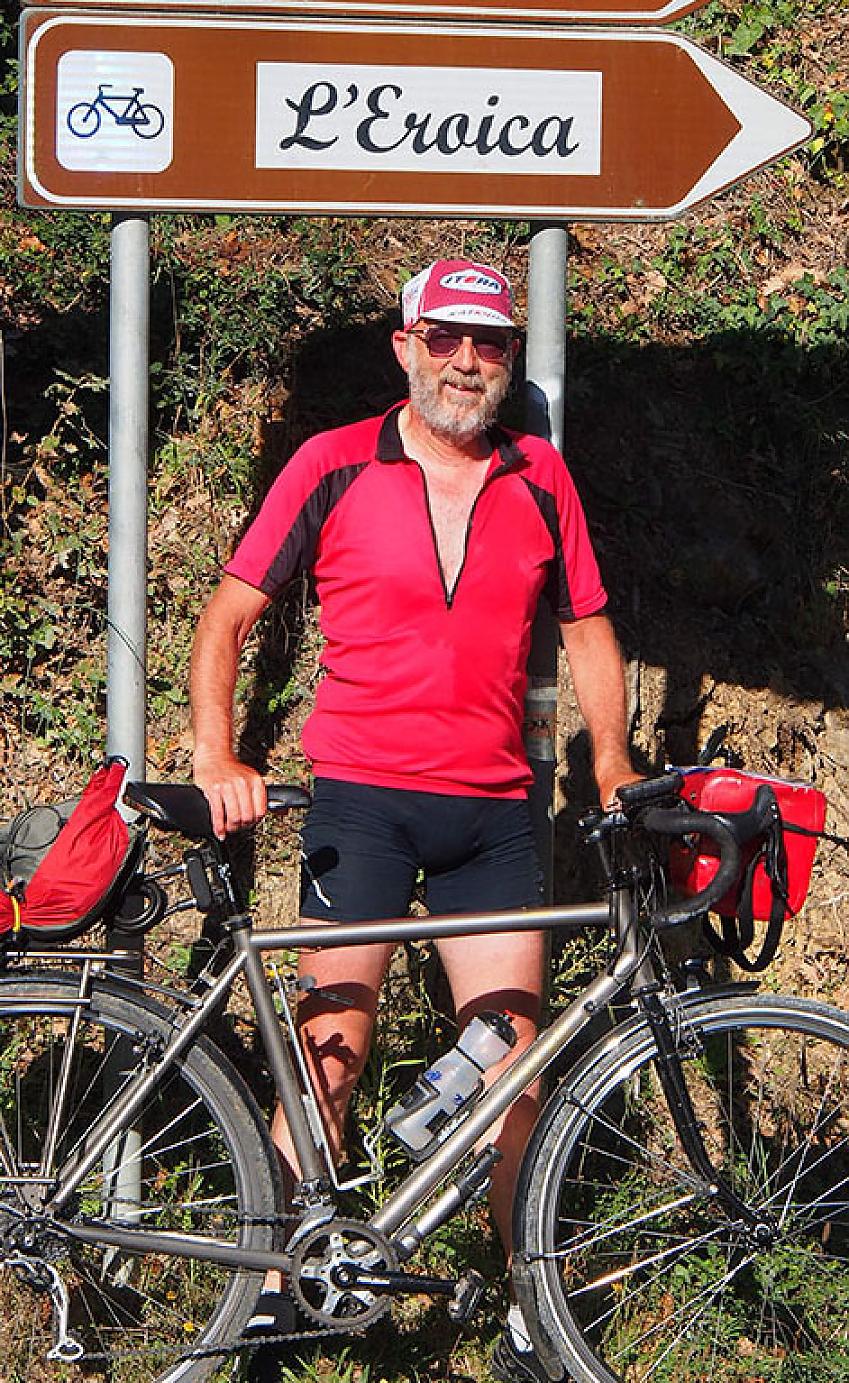 L’Eroica is the name of a mass bicycle ride along the 'strade bianche', which was originally started to preserve these ancient roads and prevent them being 'improved' with tarmac. Now every first Sunday in October, over 5,000 participants are drawn to ride pre-1987-style racing bikes upon a quite unsuitable surface for their narrow tyres! Those of our group who had seen enough frescoes for one tour, enjoyed an optional day ride on part of the permanently sign posted route. This being only three days before the 2014 event, they were entertained by preparations for the start/finish at Gaiole in Chianti, including an Italian version of the York Rally cycle jumble: the same piles of old tat but apparently more wine and salami!

Of course no account of cycling in Italy would be complete without mentioning the food. Obviously there was lots of pasta – which is excellent cycling fuel, but we had so much of it that many of us proclaimed that we would be going on a pasta free diet once we were home! My particular favourite was ribollita – a hearty and filling Tuscan bean soup with black cabbage. The carnivores amongst us enjoyed “Florentine Steak” – a barely-cooked Chianina (the largest breed of cattle in the world) rib steak, so big it had to be shared among several people. On many days we had an al fresco group picnic lunch with locally bought provisions: bread, cold meats, cheese, fruit and yoghurt. This was sometimes followed by an afternoon ice-cream stop to enjoy the excellent and varied flavours of Italian ice cream.

Sadly, all good things have to come to an end and after a wonderful final day’s ride, which to my absolute delight and glee was downhill for kilometre after kilometre, we rode back into Pisa along the banks of the Arno. 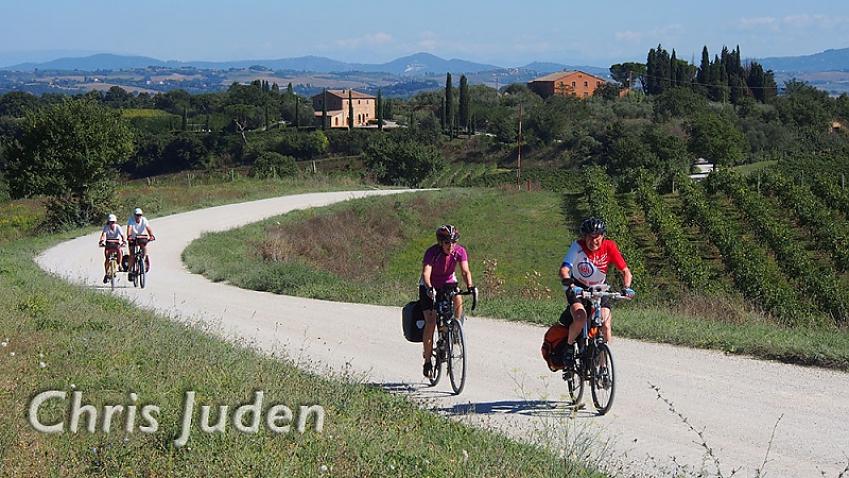 It was a superbly organised tour that combined sometimes challenging cycling with beautiful scenery and fascinating towns and cities, all in the company of a fun and friendly group of people. And I mustn't forget Chris's assistants: Greg Woodford, always ready and willing to help, whose knowledge of the Italian language and culture enriched our holiday experience. And Mike Diederich, (also fluent in Italian) who became leader of the early group after their first week, when Chris hopped on a train back to Pisa and the start of our tour.

I'll leave the final word to Chris. He met a cyclist in Pisa airport, changing out of dusty skinshorts and unpinning the Eroica number from his back, having obviously hot-footed the accelerator from Gaiole in order to catch the late night flight to Gatwick and be back at work on Monday! “Although such mass events have their appeal, I prefer our less hasty appreciation of the white roads and wine roads of Tuscany”. I couldn’t agree more.

Thanks for a lovely article

Thanks for a lovely article Penny :-D

If anyone would like to go on a tour like this, Mike Diederich (who led the one-week earlier group for me in Tuscany) is taking a tour in Umbria next September, start/finish Rome, and Greg Woodford will be visiting Sicily in October. I've been helping them with the planning and will be there to assist on both tours.

Look out for the release of next year's tours, in Cycle and on the CTC Holidays website, around the last week of November!

A beautifully written (and

A beautifully written (and illustrated) article, Penny - it brings back lots of happy memories. Thanks!

This tour is running again

This tour is running again this year (2016) and as of today (29th Feb) still has vacancies. Visit http://www.cyclingholidays.org/tours/solo.php?Tour=1656 to book your place!