By February, after this most miserable of winters, I’d almost forgotten what a pleasure it can be to ride a bike. What better to rekindle one's cycling enthusiasm and top up the vitamin D than a short cycling tour somewhere sunny and warm – like Greece perhaps?

On the taxi ride to Corinth station with bagged-up bikes from our final night’s hotel, I remarked to the driver Anastasios on the fine weather that had blessed our short tour. We’d booked our flights assuming February in the Peloponnese might be as good for winter sun as southeast Spain. Only later did I check the climate data, to find average temperatures hardly higher than Surrey and the same number of rainy days that month! Anastasios agreed: the previous week had been cold and wet, but these were ‘halcyon days’. To explain, he told a story remembered from junior school.

The old Greek Gods on Mount Olympus were displeased with their daughter Alcyone for choosing a mundane life and were jealous of her love for mortal Ceyx, so they sank his ship with a midwinter thunderbolt. Alcyone’s lament over the corpse of her husband, cast on the shore, was so passionate that Zeus was moved to reunite the lovers as kingfisher birds. The location and timing unfortunately predestined the ‘Halcyon’ bird to lay her eggs on the beach in winter, where they were chilled or broken by waves. To avoid further sorrow, her father Aeolus, god of the winds, took a winter break himself, allowing a clear fortnight of warm and calm weather in which Alcyone could safely hatch her eggs.

So was it the 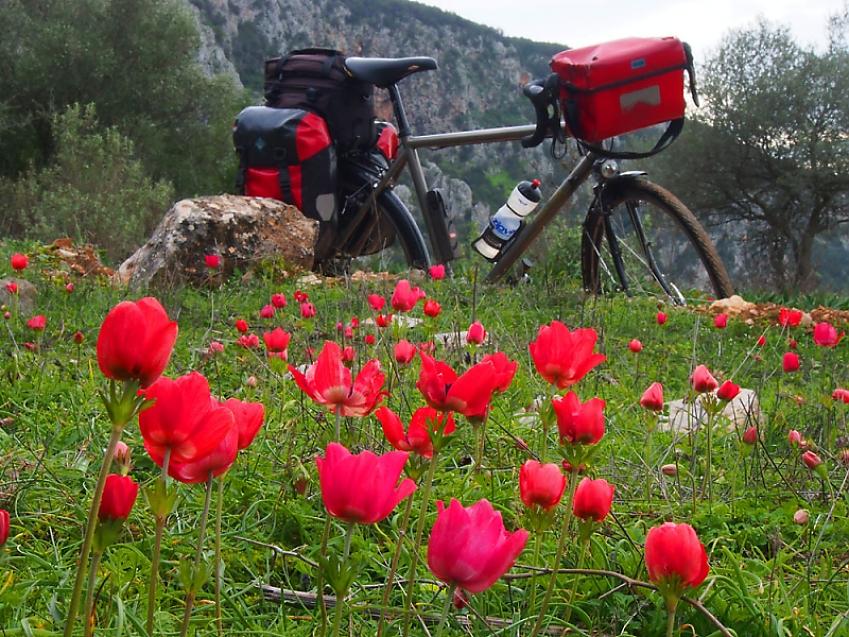 old magic of the Halcyon bird that warded off the winter storms? Or could it be the new magic of panniers weighted with waterproofs and wool vests? It must have delighted those mischievous Greek gods to see us carry a surplus load over their rugged landscape! Whichever it was, it worked and we had a great time: rolling along under blue skies beside a blue sea dotted with fishing boats and islands, orange trees heavy with fragrant fruit to our left, or climbing toward snow-capped peaks (thanks to the previous week’s wintry weather!), then freewheeling by rushing streams and green hillsides dotted with the brilliant blooms of early spring.

Our jolly three-man band comprised myself (Cycling UK Technical Officer), Mark Waters (retired Cycling UK Touring Officer) and Davin Palmer (owner of Middleburn). Davin is a frequent visitor to Greece, with a caravan in the mountains where we spent our third night and a Greek cycling friend Akis who rode with us one morning. Mark had been to the Peloponnese in times BC (before cycling). He remarked on what had changed, what had not and how different an experience it was with a bicycle instead of by boat or motorbike.

But for me, the Greek 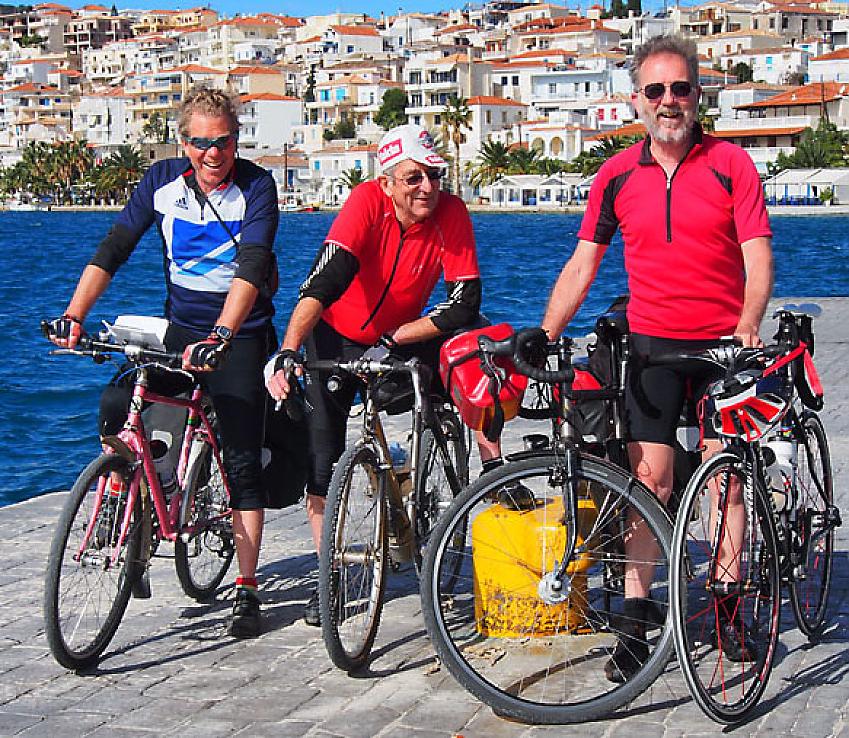 neophyte, it was all new. The language and signs for starters were incomprehensible, until I began to recall and apply the algebraic symbols of half-forgotten formulae to decode individual letters! The roads have so few signs however, that you need either a good map and sense of distance covered - or GPS. Detailed paper maps being hard to come by, we relied on my Garmin Etrex loaded with OSM-based mapping from Velomap and some possible daily route-tracks I’d pre-planned on Bikehike. We didn’t stick exactly to those routes, but they were a good guide to ensure we didn’t leave too much to do at the end. And the GPS was brilliant: no faffing at junctions and changes of plan were quick and easy to make.

The scenery was everything I expected of Greece and then some: like parts of south-eastern Spain but with a much more interesting coast and steeped in ancient history. Some of the roads are badly potholed (situation normal for Brits!) and there’s a barking dog behind every fence (plus a few on the loose!), but otherwise it’s wonderfully quiet and what little traffic there is seems to keep well clear of cyclists. We explored only the corner of the Peloponnese adjacent to Corinth, which is easy to access from Athens by train from the airport. There’s a lot more to see and I will surely be back for a longer tour – probably in March or April to be more certain of sunshine. If you’d like to see more photos there are sets from both me and Mark on flickr. 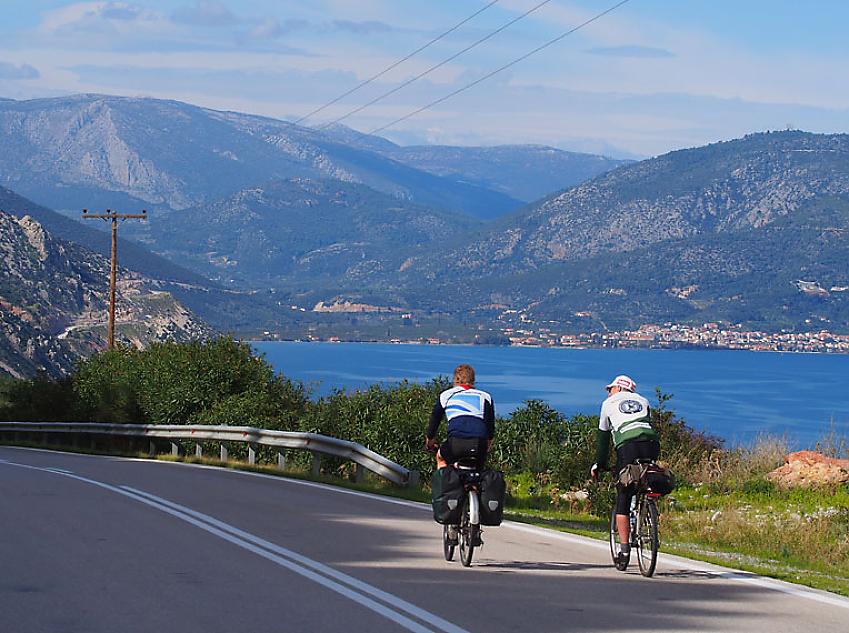 People say the Euro has made Greece expensive, but it seemed pretty cheap to me. Perhaps their economic crisis has brought down prices. Do not let the rumours of unrest deter you from visiting. Greece needs tourists and all Greeks know it! We were welcomed everywhere with open-hearted smiles and unexpected generosities. Like the owner of a mountain village café-bar who insisted that the first customers of the day pay only 50 cents for their coffees, in total, though there were three of us and a fourth customer didn’t seem likely anytime soon! On that quiet Monday we’d seen perhaps half a dozen cars in 1½ hours. And in Epidavros only one of the several modest but comfortable hotels was open, with us the only guests! Admittedly it was February, but this is a gem of a fishing village with a fine ancient Greek theatre a few miles inland – and the weather was beautiful.

According to Anastasios, Greek winters always have a Halcyon interval. The date is not predictable but sure as eggs is eggs, fourteen fine days will come along. We had enjoyed the first seven. The following week, he confidently predicted, would also be warm and sunny. And so it was – but not in soggy Surrey! 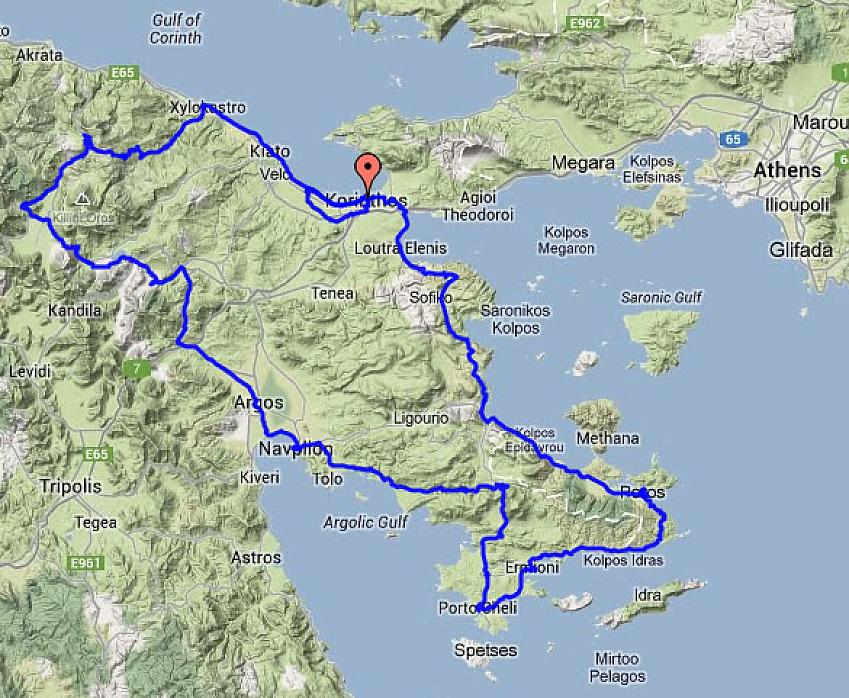 In case you’d like to repeat this route I've prepared a set of daily GPS tracks that'll guide you on a closely similar itinerary, each ending at a place where accommodation can be found – not including Davin’s cabin! With daily distances and approximate climbing totals it goes: Corinth (60km 1000m) Trikala (54km 820m) Karteri (70km 440m) Nafplio (68km 1120m) Kranidi (66km 590m) Poros (43km 480m) Epidavros (60km 900m) Corinth – plus a short loop through Ancient Corinth (30km 120m) in case, like us, you have half a day to fill at the end. Selecting each distance downloads the day's track, as a text file. Change the file ending from '.txt' to '.gpx' and it will work in your GPS or upload to Bikehike etc. - for a detailed view that you can visually copy onto a paper map.

Great write up. Just off to

Great write up. Just off to get the passport and find flights. Inspired!