Being inspired at the Cycle Touring Festival

Being inspired at the Cycle Touring Festival

Stephen Fabes has cycled for 6 years across 75 countries, but last weekend he went to Lancashire to the Cycle Touring Festival to meet hundreds of like-minded cyclists and to get some inspiration for his next journey.

I like to think summer begins when the Cycle Touring Festival rolls around and this year’s fiesta of bikes, storytelling and top tips is as blue-skied as it can be.

Dreamed up by the dynamic Cycling UK member Laura Moss when she was a year deep into a bike ride around the world, the festival is run with plenty of help from her husband Tim.

Even though today’s cycle tourers are a motley brigade, the festival aspires to have it covered. The line up boasts intrepid film makers bikepacking on tyres the width of my calves, to transcontinental racers, plodding devotees and every jaunt in between.

Waddow Hall is a 17th century manor house set in green and reaching grounds in Clitheroe, Lancashire. The festival marquee and hall rise above a cascade of grass and the Ribble (the world’s best named river?) where I’ll be soaking later on. Rolling campsites lift behind us and a bar serves beers named for farmyard animals. A pheasant gives me the eye on the way to my campsite. A rabbit takes refuge under a van in the carpark.

This is now the 4th Cycle Touring Festival and it’s clearly on a roll judging by the number of festival goers coming back for more when Tim begins the weekend with a straw poll and hands shoot up from returnees, though there are plenty of festival virgins too and many have pedalled to the festival from as far afield as Bristol and Newcastle. Tim and Laura limit tickets to around 300, which lends the weekend a villagey vibe and ensures getting on first name terms with half the crowd.

The ethos is eco-friendly and non-commercial (you might find books from the various speakers on sale, but don’t come expecting to find stands selling logoed merchandise). Laura breaks even or rolls a small profit into the next year’s gig. And it’s Laura and Tim’s friends and family that form the bedrock of volunteers making it happen. Laura’s mum, the redoubtable Sharon, has press-ganged caterers into providing free or discounted grub, meaning that all your food is provided festival-long.

The idea is this: butter some croissants for breakfast among a squall of bikers of varying degrees of age, apparel and experience. I chanced upon newbies hungry for inspiration and a plucky 10-year-old girl who’d been towed across India on the back of her father’s bike when she was a one year old. Then peel off to the talks. There’s the nitty gritty: how-to sessions where the experts share their wisdom on topics as diverse as rough camping and frame building to film making and podcasting before getting pelted with questions (turns out the audience have plenty of experience as well and the sessions quickly descend into a democratic group stab at how-to). There are tales from the road which provide entertainment, inspiration and in one notable case a sense of peace as James Thomas blends Vipassana meditation with a story of cycle touring and we all focus on our breathing by the Ribble in a net of shade. "It's impossible to leave the event without feeling uplifted" says author and cycling Europe aficionado Andrew Sykes, and I suspect he’s on the money.

There are practical sessions sprinkled throughout the weekend: you can sink your teeth into kit choice, writing on the road or learn how to make your own sleeping bag. There is, of course, plenty of bike-chat, and if you want to fall into the rabbit holes of best camping mat, gear ratio and frame metal, you’ll be sorted. Others, like myself, will run a mile from chatting sprockets, and so the eclectic film session is a good call, as are a bunch of seemingly more peripheral hobbies that mesh well with touring: pick out planets on the introduction to astronomy, for example, or try your hand at the Promethean bush craft session. Saturday evening rounds off the action the way it should: with live music and booze.

On stage, certainly, but also in every corner of the festival, it’s hard to get from the bar to the marquee without anecdotes and war stories dropping in and out of ear shot.

With such a diverse agenda, it’s tough to nail down the heart of the cycle touring festival. If I was pushed though, I’d err on the side of storytelling. On stage, certainly, but also in every corner of the festival, it’s hard to get from the bar to the marquee without anecdotes and war stories dropping in and out of ear shot. And it’s this face of the weekend that triumphs on the Saturday night when anyone with the mettle can take to the stage and tell a short story "please let it be about cycling" advises Tim, lest wanton exhibitionists steal the show. The take-homes can be easily distilled: don’t be scared, cycle touring is for everybody and, at the risk of sounding trite, humans are generally alright, aren’t they?

Highlights for me came quick-fire, but it was perhaps the touching escapades of Ishbel Holmes with a 20-kilogram rescued street dog called Lucy in her handlebar basket which will stay with me the longest, especially since her backstory suggested nobody would have expected her to be talking to a roomful of people about a bike ride about the planet. Charlie Walker’s self-effacing tour of his own world ride was also a big hit, ostensibly a reminder of how not to do it turns into a celebration of just how great it is to screw up, whether through breaking into Tibet and getting arrested for your trouble, camping on soon-to-be-flooded flood plains or learning about anxiety by sinking your pirogue in waters plied by crocodiles. And there’s Laura and Tim’s own freewheel through the anecdotes, with an emphasis on the reason I suspect a good hunk of people tour in the first place: the people you meet along the way.

Inclusive, fun, thoughtfully run and tight knit, the weekend has been a storming success, ‘best one ever’ beams Laura. If you need any more proof, it’s the grinning throngs milling around on the Sunday night, assured that a bicycle is a neat way to explore, in the broadest terms, the world and your own doorstep.

It helped that it was wall to wall sunshine, but it was the people who really made it sparkle. And it’s unlikely that any of them will escape without a new plan fermenting in their mind. 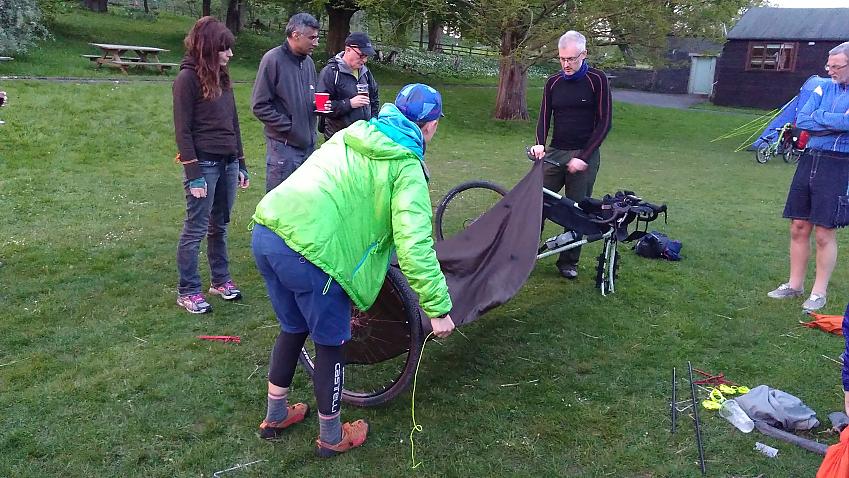 The Cycle Touring Festival: The perfect place for planning an adventure View