It's the largest mass-start cycling race in England, and probably one of the toughest too. This year it celebrated 50 years of existence and our local development officer, Anna Cipullo, went out to see what it was all about.

Sunday 30th September saw a shell of a cyclist drag herself passed the muddy finish line of The Three Peaks Cyclocross race. Although, I’m not quite sure you could call it a race. More of a survival test with a whole lot of mental torture. And I wouldn’t quite say it was it was a cyclocross event either, more of a hiking expedition with some road riding and the odd bog diving opportunity. So perhaps and off-road triathlon would be fitting. Anyway, it happened, and boy am I glad it’s over.

So it starts on Sunday morning filled with cloudy gloom that didn’t seem to dampen the 600 plus riders as they sprinted out from Helwith Bridge with a spring in their pedal strokes and a certain level of optimism as they headed for hills. I held back a little trying not to get too excited and expel all my energy before the dreaded Simon Fell. Zipping off the road onto our first bridleway it was clear this was going to be a long race. Rain from the week had settled quite nicely in the field ahead and dotted pits of peat here and there in an attempt to drag your bike under or steal a shoe. Slopping knee-deep through bogs on the way to the first hill was sapping, but spirits were high. I remember thinking “isn’t this fun!” and meaning it. How naive.

Simon Fell was reached on foot. Whether the winning machine, Rob Jebb, had to run or managed to ride most of the way to the bottom is unknown, but I know for sure he would be off and walking up Simon Fell. As things started getting a little vertical I remembered my plan; make your own path away from the crowd and plod in rhythm. No chance. My calves were burning within minutes and the hill was getting increasingly closer to my face as it got steeper and steeper. For those that don’t know, this is the famous unrideable bit where everyone lugs their bike on their shoulder up the hill. A daunting task in the best of weather, but on Sunday we were experiencing the worst weather seen by the race in 31 years. Oh lucky me. 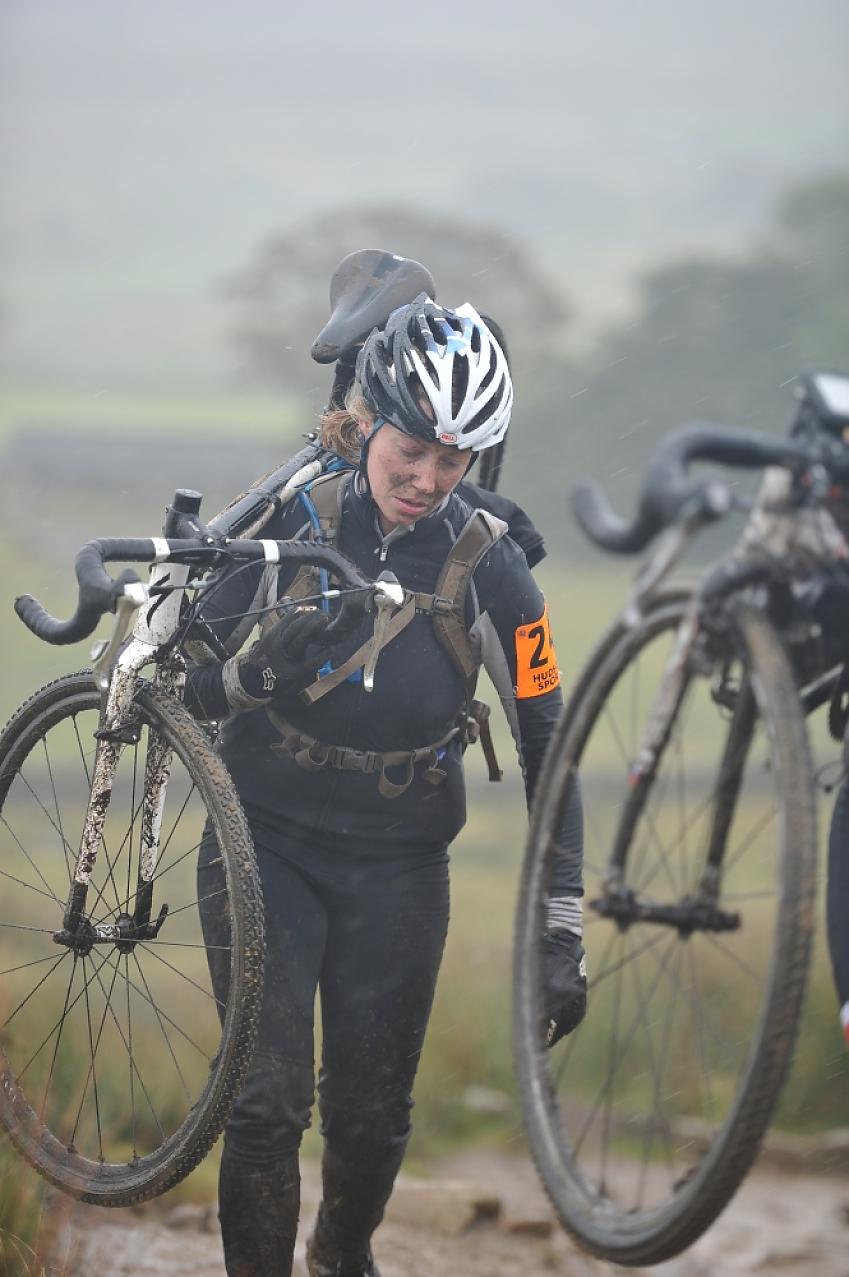 Half way up Ingleborough and two face-plants later I decide that my SPD shoes are not suited to the waterlogged grassy bank and a man shouts “get to the fence, lass!” as gap appears in the queue beside me. I abide and slip in, relieved to now have a fence beside me to help pull me up. The route was nicely trodden down by the hundreds of riders who preceded me, but it meant my little legs had to use the steps of lankier riders and I had to follow the pace of the riders in front. Tough to say the least, even without the odd rider attempting to play dominoes with the others queuing behind.

Once at the top, you’re not really at the top. You just get a slightly different terrain with a slightly different incline grade. Avoiding people's back tyres swinging around in front of my face I attempt to waddle up rocky uneven steps through a thick wet fog that meant you could just about see two riders (or should I say, hikers) in front of you. The summit was our first opportunity to log our timing chips and reminded me I was in a race. I hopped on my bike and started riding over pointy black rocks with an air of caution; however, the wind had other plans for me and started blowing me off course. Stood on a rocky black summit with about five metres radius of visibility is a little disconcerting by foot, let alone on a bike with near 60mph side winds. I decided to jog.

Descending Ingleborough was again by foot. I was sure I could ride the rocky terrain, but any time I got on my bike I was blown off towards what appeared to be a cliff. The fog made everything look like a sheer drop and fear took over a little, so I ran. An hour and forty minutes into the race and the terrain starts to look rideable. I was leaving the fog at the top of the hill and descending into a much clearer grassy looking track, or so I thought. Swamp monsters appeared from nowhere and grabbed my front wheel at every opportunity. The rain was starting to pour, but a few bog-snorkelling sessions later and it really didn’t matter. As I yanked my arm out of a bog I thought to myself that I was glad to be wearing black as there would definitely be some comedy ebony and ivory photo opportunities if I had chosen any paler number.

Two hours later I’m on the road again at Cold Cotes, and what an appropriate name. I’m soaked and covered in peat and my legs are weary. My brain tells me to take it easy so we can last up the final two hills, but my legs say it’s too late. I digest an energy gel and press on through the head wind. I find another lady at my pace and we start to ascend the second peak, Wernside. All I can remember at this point is rocks, steps, rocky steps and side winds. My back was starting to give way at this point trying to resist the strong side winds and the left side of my face was burning from rain whipping into it. I had no idea how far up it was, or how steep the drop next to me was as the fog had descending again. Chatting to my new race neighbour I realised I’d started to lose my sense of humour. I hear a lady behind me shouting and screaming about how ridiculous this was. I empathised by tried to break away from the negativity.

At the top of Whernside a group of marshals were huddled together next to a wall. We had to shout at each other to hear over the winds. Their spirits were surprisingly high and I was grateful for some happy chat, if only brief. I decided it was time to put an extra layer on and let my new friend push ahead. Battling with a coat in high winds whilst the bike (a good 22lbs) was struggling to stay hooked to my foot was a sure sign this event was definitely starting to air on the ridiculous. And then it started hailing. Joy. I picked my bike up, nearly lost it to the wind, and hopped on.

The descent from Whernside was a test of patience. Rocks were easily avoidable, but not in these strong winds. I could not keep the line I wanted and began to fear for my safety as the race pack around me dwindled. A man runs past as I attempted to mount my bike and says “You’re not going to ride this are you?”. I had no response as I couldn’t see the descent ahead, so I ran with him. As I paced through the fog I understood his comment. Every few metres saw a wheel sized gully channelling water across the path. Riding it would mean almost certain pinch puncture or a trap-door style over-the-handlebar crash. Inner tubes littering the descent backed this theory up, so again, it was time to jog. 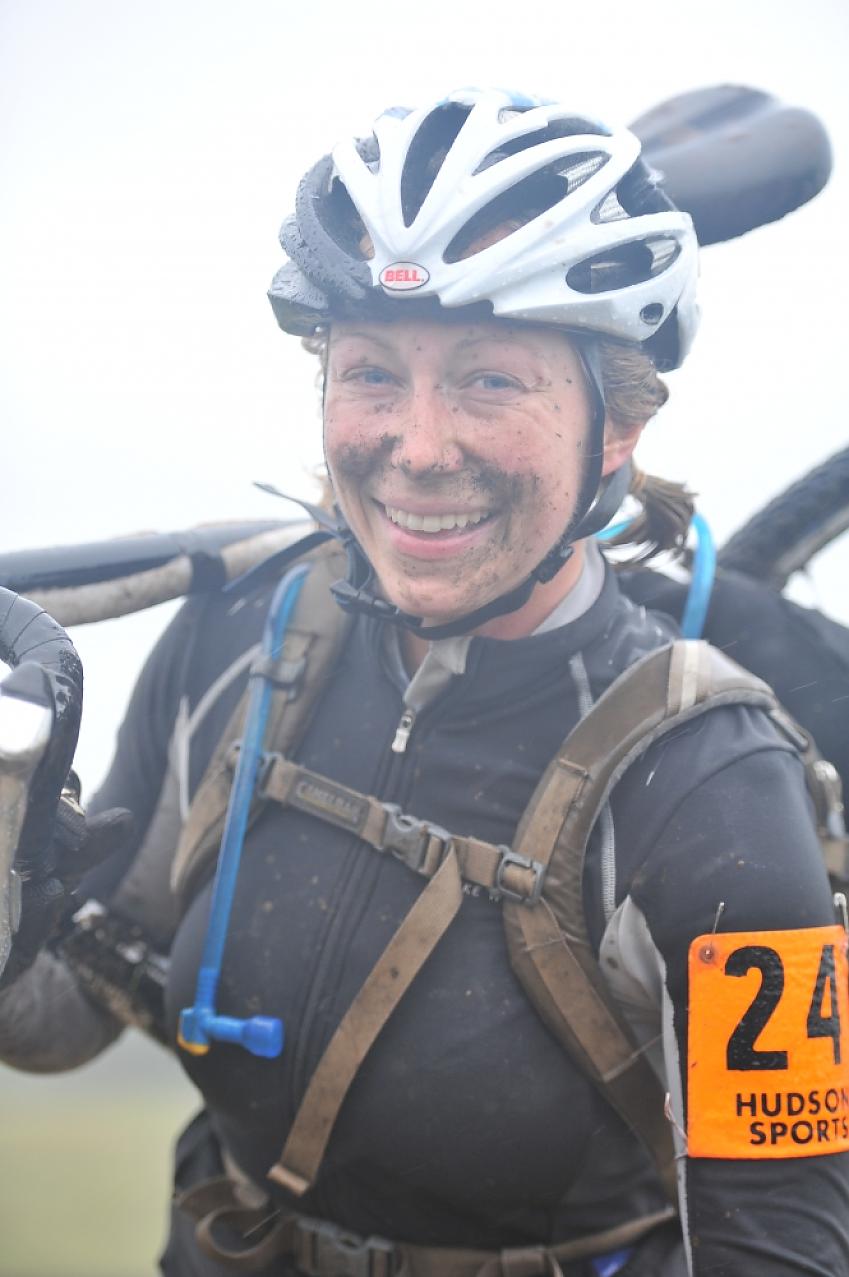 A few river crossings later I come down to the famous Ribblehead viaduct (well, I think that’s what it was peering from the mist). I was pleased to see a famous landmark from the race as, up until then, the fog had prevented us from seeing any of the famous views or hills that were on offer. A marshal asked me if anyone was hurt up there, presumably because they were taking so long. I explained that weather was extreme and many were walking and went on my way. Hitting the road I was relieved to be out the fog again and riding through headwind that was at least on tarmac with wiggle room. A group of us congregated for the final hill, but it wasn’t meant to be. The marshal stopped us and explained we’d missed the cut off by 20 minutes and the weather was too rough to let anymore up. The poor marshals up there had been sitting in this weather since the morning and needed to come down.

I pedalled the final road section to the finish point disappointed that I couldn’t finish it, but relieved I didn’t have to ascend again. I dragged my bike through the mud at the finish line and got handed a receipt with times on, a t-shirt and a medal. I didn’t quite feel I deserved the latter, but at least I can say I’ve been there and got the t-shirt, literally. I think racking up nearly 100 miles at work for a Cycle Train project on the same week was a bit of a mistake. A proper rest-week was needed, especially as I had had a hard week’s riding and walking in the Lakes the week before, but hey, it was an experience. I’m pleased to have survived my five hour challenge with minor bruising and a strained back. My friend came out with a broken collarbone, so I shouldn’t complain!

If you could book the race on a clear day, I would say do it, and get lots of hill running in beforehand. Lots! But if you knew it would be on a foggy, windy, rainy, boggy, hailing cold day like I had, stay home with a cup of tea instead. You won’t regret it.