Cycling UK believes that awareness campaigns aimed at drivers and/or cyclists must be: based on sound research, accurately targeted, positive and non-judgemental; avoid victim-blaming; and linked to enforcement activity. We also believe that schools and colleges should teach students about responsible road use, whilst spreading positive messages about cycling.

Much of the good practice we advocate for public awareness campaigns reflects the findings of a 2009 study of several successful initiatives targeted at certain behaviour (these included speeding and green travel, but the range also covered issues un-related to transport). Most salient to the tactics Cycling UK supports, the authors highlighted: sound research, accurate targeting, non-judgemental attitudes and a positive approach.

Below we set out the principles of good practice that apply to all driver/cycle awareness campaigns in any format, e.g. online, videos, posters etc., and whoever launches them (i.e. national or local government, the police or other agencies). 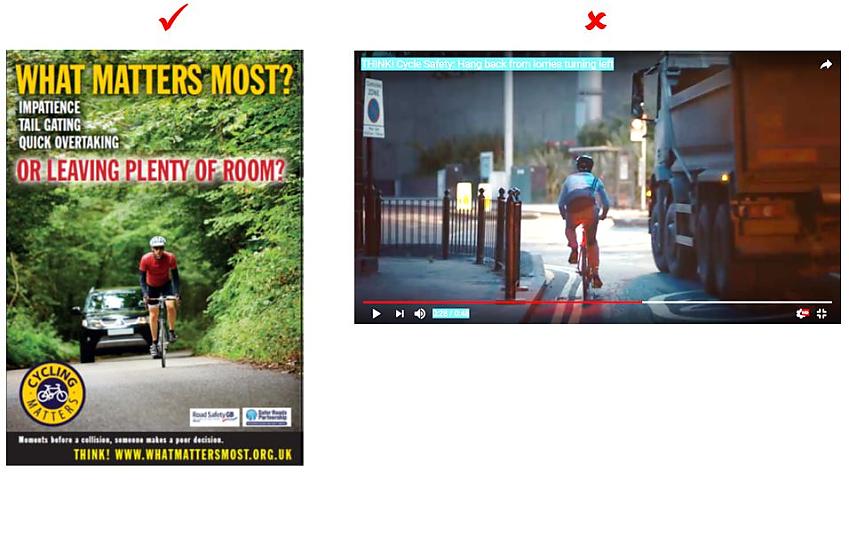 Launched in March 2013 but still online, ‘What Matters Most’ is a publicity campaign and information resource focussing on driver distractions. Although it targets all road users, it emphasises the needs, concerns and safety of cyclists in particular.

This largely sound campaign homed in on the simple errors and poor decisions made by drivers that can put cyclists at risk.

Most of the messages and graphics are simple, focussed, well-communicated, do not lay blame or make any explicit or implicit judgements about cyclists’ behaviour.

For example, one poster asks drivers to think about whether it is more important to make a call on a mobile or eat a sandwich at the wheel than see a cyclist; and another asks whether impatience, tail-gating or quick overtaking matters more than leaving a cyclist plenty of room (poster left).

Regrettably, THINK!’s ‘Hang Back’ campaign is, in our view, a classic example of a ‘victim-blaming’ approach.

Designed, no doubt with good intentions, to alert cyclists to the risks of ‘left hooks’ from lorries, it advised them against riding between two colliding objects.

We objected primarily because the message implies that if a cyclist finds themselves between a lorry and a kerb in the vicinity of a junction, it is their fault if they are crushed should the lorry turn left.

It is profoundly misleading to suggest this because: cyclists do not necessarily choose to put themselves in such a position (the lorry might have overtaken them); and drivers ought not to endanger others by their manoeuvres and should never be absolved of responsibility, even implicitly. Designing out lorry cab ‘blind spots’ is a crucial issue here too, as is junction layout.

Vehicle stickers are often used to warn cyclists not to undertake lorries. Again, Cycling UK believes that all bodies with a road safety remit, including local and national government, must promote and support good practice, i.e. messaging that is clear, non-judgemental and never misleading.

The sign on the far left clearly warns cyclists against undertaking a lorry.

The ‘Watch Out’ sticker in the middle uses easily understood imagery – i.e. the iconography of internationally understood road signs – rather than relying on words. This means that cyclists, including those whose first language is not English, can understand it quickly and easily.

It gets its message across clearly but without being scary, or suggesting that it is illegal to pass a vehicle on the left-hand side. Also, being two-dimensional, it is not obvious whether the cyclist is acting foolishly or staying back – it is a genuine, non-judgemental warning.

This notice on the right, based on a prohibitive traffic sign, gives drivers the false impression that cyclists passing on the left side are lawbreakers. As a result, they may not drive with as much care as they should and, in the event of a collision, blame the cyclist even though there is a clear duty of care for drivers to look out and not turn across the path of cyclists at junctions.

Funding decisions on road safety awareness campaigns should be based on:

There is little evidence to suggest that awareness campaigns change behaviour on their own. To maximise their impact, therefore, they need to interact synergistically with enforcement activity.

While awareness campaigns help make people understand why they need to behave in a certain way, vigorous enforcement seals public acceptance, and ensures that those who still ignore the messaging will be suitably penalised.

This is a key lesson from the Government’s long-term campaign to tackle drink-driving through publicity and linked enforcement. We very much commend the steep drop in drink-drive deaths since 1979 (-85%), and the marked change in public attitudes that the DfT verified in its survey to mark the campaign’s 50th anniversary back in 2014.

It is with some concern, therefore, that Cycling UK notes that provisional figures for 2016 saw a ‘statistically significant’ rise in fatalities, KSI and the total number of collisions and incidents where at least one driver was over the alcohol limit. Drink-drive awareness or enforcement – or both – seem to be weakening somehow. Dwindling numbers of roads police may well be a factor.

The operation, which is ongoing, involves intercepting drivers who fail to give a plain clothes police officer on a bike enough room, and pulling them aside for a demonstration of safe passing distances on an illustrated ground-mat. Repeat offenders, those who drive dangerously close, and those who decline the “chat on the mat”, however, may still be charged.

By September 2017, the force had pulled over at least 200 offenders, while reports of close passes halved. In a news release (September 2017), they also noted that: “The number of cyclists involved in serious road smashes in the last year has dropped by 20 per cent compared to the previous 12 months.”

Since the launch of the scheme, Cycling UK has crowdsourced funding for similar mats and supplied them to most other forces in the UK through our Too Close for Comfort campaign. Several are now putting the mats enthusiastically to use.

Cycling UK strongly supports the argument that schools and colleges can provide a vital learning ground for road safety. We believe that they should teach children and young people about responsible road use, and promote positive messages about cycling and cycle safety.

PSHE lessons are a good opportunity to do this, with lessons supported by resource packs that include positive material about taking particular care of cyclists and pedestrians. This would benefit children from their earliest stages of development right up to their teenage years, when group-based peer discussions about road safety help offset the otherwise ‘solo’ nature of learning to drive.

It is unfortunate, therefore, that some schools present such a negative image of cycling, and even take a punitive attitude – i.e. by banning it rather than addressing the local hazards that affect it (e.g. bad driving from members of the school community). We even know of instances where schools have threatened to confiscate the bikes of children who arrive without helmets.

There is no excuse for reinforcing debatable, prejudicial road safety messages that make cycling seem like an extremely dangerous way of commuting to and from school, so we urge the Department for Transport to do what it can, jointly with the Department for Education, to promote positive messages about cycling and cycle safety in schools.

[1] The wording on the far left-hand image from Transport for London (TfL) was agreed with London Cycling Campaign (LCC) in 2006. The other image won a national design competition for an easily understood image.