Cycling UK member Leigh Bland served in the RAF for 17 years, but had his life turned upside down after an accident back in the UK. Now he wants to use his experiences to inspire other people, both able-bodied and disabled, to never give up on their goals.

When Leigh enlisted in the Royal Air Force as a Technical Engineer back in 1998, he could not have imagined that an injury sustained during exercise over ten years later would result in the eventual amputation of his lower right leg.

Although reconstructive surgery was attempted, it tragically resulted in nerve damage which left him “in constant agony” and suffering from depression. In 2013 Leigh was diagnosed with Complex Regional Pain Syndrome and, as a result, made the decision that would change his life forever.

Within eight weeks of wearing a prosthetic, Leigh was back up and walking. And when the Invictus Games were announced later that year, he registered and was selected to join the archery team for Great Britain. But this was just the start of his remarkable fitness journey.

Soldier Ride US – a four-day cycle around the state of New York – was an opportunity that presented itself in the following year but, looking back, Leigh feels he didn’t make the most of it: “I hid a lot in my room and didn’t want to socialise… Being very overweight and unfit, the riding was a struggle – even though I enjoyed it at the same time.” Nevertheless, the event was to be the first step towards his love of cycling.

In 2016, Leigh joined a local gym to which he tried to cycle as much as possible. Heavy lifting became his focus as it suited his weight, and he participated successfully in Strongman competitions as well as the Arnold Sports Festival.

However, another curve ball was thrown his way when he tore the rotator cuff in his shoulder. Forced to lower his weights, switching up his training style to include indoor spin classes, Leigh saw his physical and mental health improve as he experienced dramatic weight loss.

“This was the turning point,” said Leigh. “Every day I would cycle the seven miles to the gym and the seven miles back home. I found that it calmed me down – it helped with my depression and feeling stressed.”

My stump was hurting so bad because of my prosthetic so I took it off, shoved it in the recovery van and cycled 26 miles on just one leg!

It was a while later that Leigh decided he wanted to give Soldier Ride a second go. “I was amazed when I got chosen to do it again,” he began. “The event took place in July of this year, and I made the most of every single day and discovered many things about myself: how fit I was, how determined I was and how much I enjoyed cycling”.

His biggest test of the ride came on the final stretch: “My stump was hurting so bad because of my prosthetic so I took it off, shoved it in the recovery van and cycled 26 miles on just one leg!” 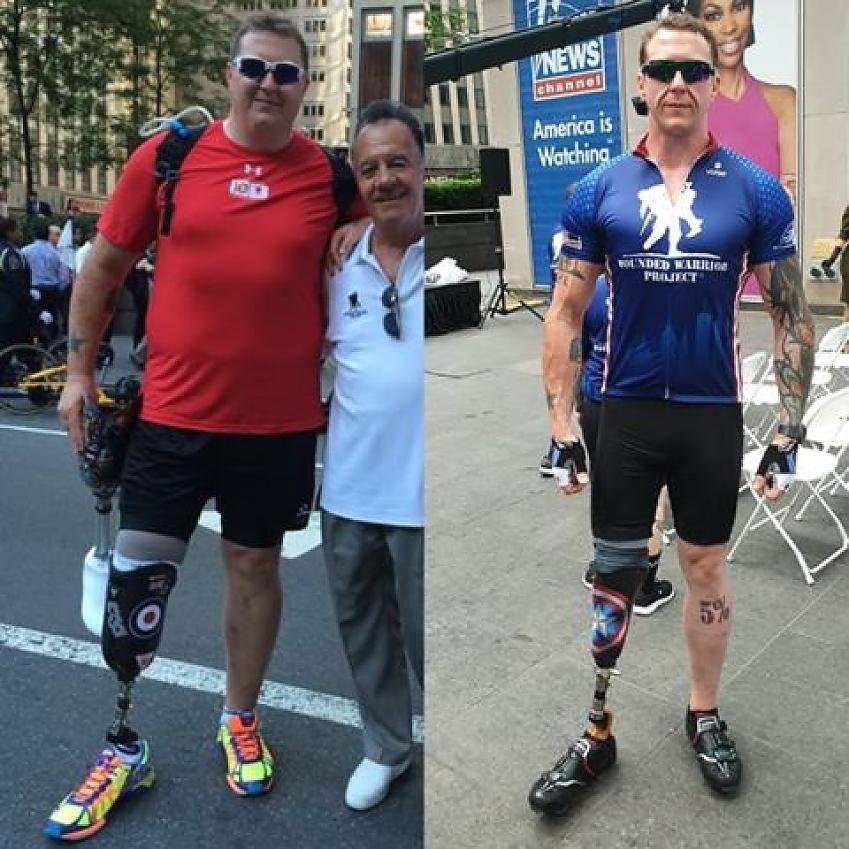 Cycling helps so much with my mental health; it’s the most enjoyable exercise I’ve ever done in my life.

Now Leigh is back home in the UK, riding his bike every day and looking for more cycling challenges to complete. “Cycling helps so much with my mental health; it’s the most enjoyable exercise I’ve ever done in my life.” He is currently studying to become a Personal Trainer and has just applied to take part in the next Prudential Ride London and Race Across America, for both of which he hopes to raise money for Blesma – a military charity that supports wounded veterans.

“I want to show people, both able-bodied and disabled, that anything is possible with the right mindset and determination. Even when you lose a part of you, there can always be a way. Just because you have a disability doesn’t mean you have to give up. If I can lose ten stone in 16 months and cycle up to 50 miles a day, my belief is that you can achieve anything if you want it enough.”

Cycling UK affiliated group Wheels For Wellbeing support disabled people of all ages and abilities to enjoy the benefits of cycling. Their annual survey for disabled cyclists in currently open, please do take the time to fill it in.

My Cycle, My Mobility Aid: recognising cycles as a mobility aid View