We’re regular commuters rather than tourers, but two years ago, at the Youth Hostel in Keswick, we met a wonderful German family who were cycling coast to coast. Their enthusiasm fired our own imagination. Last summer, we felt ready for our own adventure. With a five-year-old, a Follow-Me tandem, and only a modicum of parental fitness, we needed to go somewhere largely flat and traffic free.

A shared desire for ‘a proper summer’ ruled out the North Sea Cycle route, while the fabled river-valley routes of the Danube and the Elbe were dismissed as ‘too busy’. We settled on the Altmühl-Radweg, a German long-distance cycle path that includes imposing castles, countless lakes, and many enticing beer gardens. Following the valley of the sleepy Altmühl River, the route starts at the walled medieval city of Rothenburg. Imagine a walled city like York, but bigger and with better-preserved old buildings. It finishes at the imposing baroque abbey of Weltenburg on the Danube 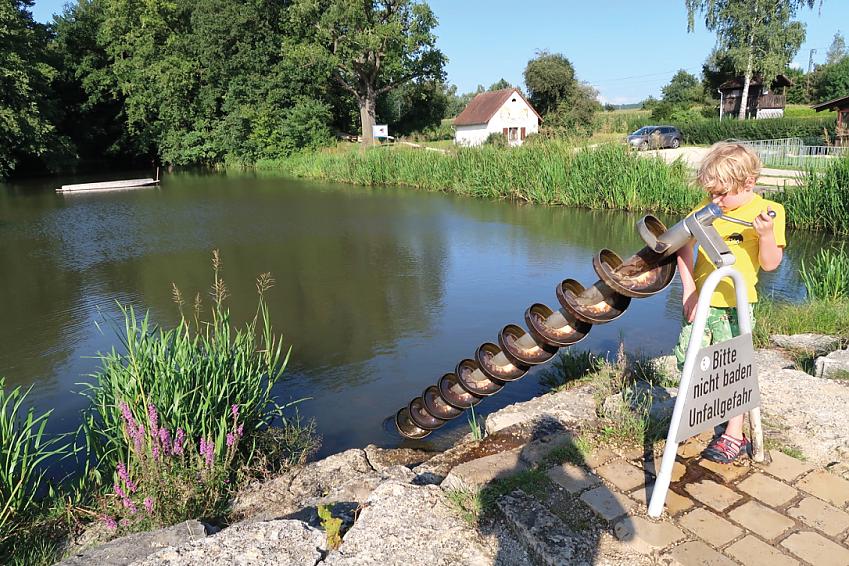 Covering some sections by train and averaging about 15 miles per day, we cycled the stretch Rothenburg to Kinding, and included a detour to the Großer Brombachsee, a reservoir and popular recreational lake. The area is renowned for its fossils, and Solnhofen’s unassuming Bürgermeister-Müller-Museum holds one of only six known specimens of the archaeopteryx. We tried our luck at finding our own mini-dino at one of the quarries open to visitors.

Most of our cycling was along idyllic, traffic-free paths through the countryside, offering plenty of opportunities for breaks for sightseeing, splashing, playing, or eating ice cream. It helped that in our fortnight spent in Bavaria, we didn’t get rained on once; the sky reflected the blue-white pattern of the Bavarian flag. Our tour ended  in the picturesque village of Kinding, which has excellent rail transport links to nearby Nuremberg and its airport.