Timmy Mallett with his overnight kit

Our #12nightsoutin1year campaign challenges people to try something new by camping out. Children's TV icon and cycling artist Timmy Mallett jumped at the chance to give bikepacking a go in the Surrey Hills

“You mustn’t pause or hesitate… or you get a bash on the head like this.” So go the rules of Mallett’s Mallet, Timmy Mallett’s trademark word-association game on 1980s children’s TV, but they might equally apply to cycling along this rooty bridleway in the Surrey Hills in the dark, beneath unforgiving low branches.

As well as being a versatile entertainer, whose career has spanned from radio DJ to kids’ TV star to number-one pop singer to cycling artist, Timmy Mallett is a great sport, especially when it comes to getting on his bike. Having ridden 3,500km from his home in Berkshire to Spain, via the Camino de Santiago, and written about his journey in the part-travelogue, part-autobiography Utterly Brilliant: My Life’s Story, Timmy shared his enthusiasm with Cycling UK to help promote Bike Week at the start of summer.

Chatting to him at the time, it emerged that although he enjoyed occasional night rides, often involving friends and his local pub, and sometimes liked to sleep under the stars on the trampoline in his garden, he had never tried bikepacking. When he heard about our #12nightsoutin1year challenge, run in conjunction with OS Maps to encourage people to get out on their bikes for an overnight adventure, he was intrigued. Would he like to have a go? You bet he would.

So it is that on a luckily warm and dry Wednesday evening, I find myself in the slightly surreal position of closing my laptop and setting off from Cycling UK’s Guildford HQ in the wheel tracks of someone I used to watch on the Wide Awake Club when I was nine. Judging by his outfit, the last 35 years never happened: he’s still rocking neon colours and wacky headgear, along with a customised cycling jersey promoting his book, and a matching flag trailing behind his Giant e-bike. Not going incognito, then, Timmy? On the contrary, he carries a sheet of stickers to wish anyone who recognises him an “Utterly Brilliant Day”. 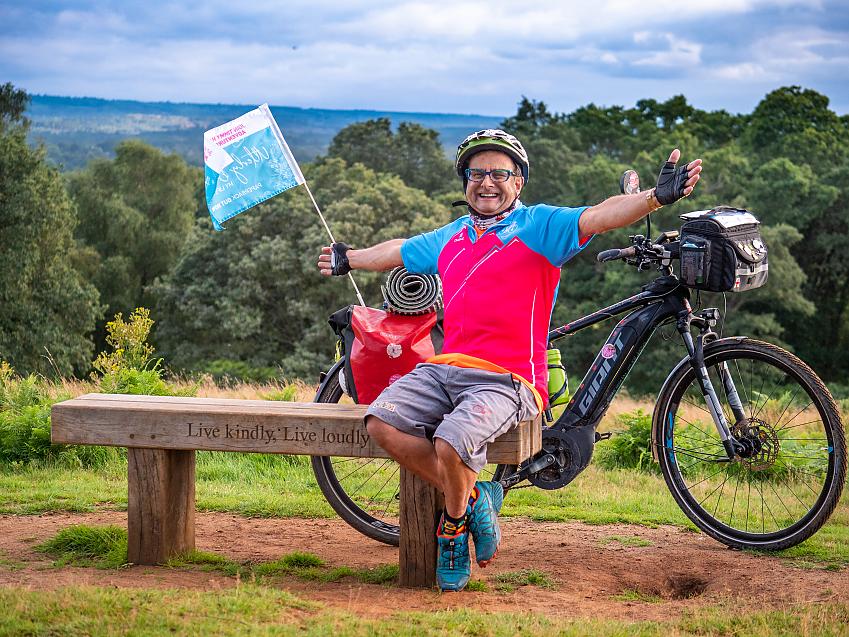 Stopping at a bench with an appropriate motto

Timmy is not the only novice here: I can count my bikepacking trips on one finger, so it’s just as well we also have Sam, Cycling UK’s wild camping expert (who hasn’t skipped a ‘bivvy a month’ for two and a half years), and photographer Robby, who has accompanied Sam on previous trips and made inspiring films about them). Also joining us are Gary, who has known Timmy since his university days (and has already ridden more than 40 miles from London to Guildford before we even start), and David, Timmy’s neighbour and also associate priest in his local church in Cookham.

As we pick our way out of the Guildford traffic and emerge onto the North Downs Way, the sun breaks through and the countryside opens up around us, before closing in again as we enter ancient sunken lanes through the woodland. We soon discover one drawback of the dry weather, when combined with Surrey’s heathy geology: Sam’s carefully recce’d route has turned to deep sand in places. Those of us on chunky mountain-bike tyres skip over it without too much trouble, but skinny wheels combined with laden bikes mean our trio of guests are soon swerving and skidding. At one point the Reverend David topples right over into a verdant patch of nettles, but handles it with the dignity appropriate to a man of the cloth.

“That should be the end of the sand,” Sam asserts confidently – a refrain which, to Timmy’s delight and constant ribbing, is repeated for much of the next hour. Respite comes at a pause on a bench with views stretching to the South Downs, where Timmy tucks one of his late brother Martin’s name tags into a crevice: a ritual he repeated along the entire Camino de Santiago, as told in his book.

Still, if Surrey has a lot of sand, it also has the advantage that for all its rural beauty, civilisation is never far away, and this was to be a gentle introduction to bikepacking. No foraging or heating dehydrated meals for us tonight, as we have a table booked at a handy pub. In the garden, of course – we’re not totally soft. 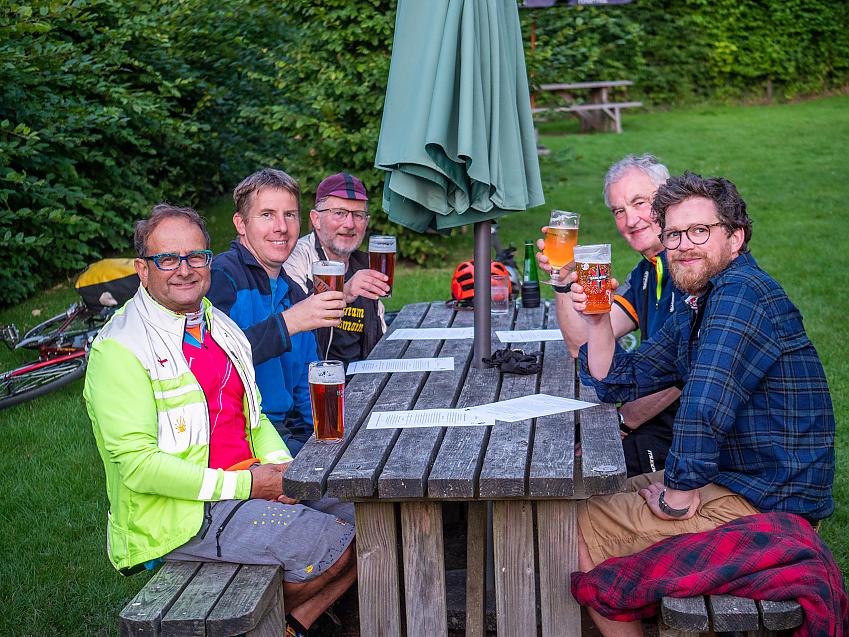 From left, Timmy, Rob, Gary, David and Sam 'roughing it'

And that’s the beauty of #12nightsoutin1year. You don’t have to go on an epic adventure and rough it. You can have a sociable ride with friends, without the worry of getting home before bedtime. With a few essentials, which don’t have to be expensive, you can stop, rest, and start again in the morning while the rest of the country is still waking up.

After a hot meal, a pint or two and a quick nightcap (spot the amateurs who neglected to bring a hip flask!) we set off to find a suitable place to set up camp. It’s important to be responsible: in England, wild camping is only legally permitted on Dartmoor. Use common sense, obey signs, and most importantly, leave no trace.

It soon becomes clear that our approaches to packing vary considerably. The bikepacking mantra is TLS, the polite version of which is “Take Less Stuff” – but on tonight’s evidence it might also stand for “Timmy’s Large Stuff”. Instead of an inflatable sleeping pad he has an old-school foam rollmat, and his sleeping bag alone (last used by his godson and then left in the attic) is bigger than my entire seatpack. “Is that a double?” Gary asks helpfully. One surprising omission from his pack is a mallet, but luckily the ground is soft and our tent pegs go in anyway.

We soon have our shelters set up and water heating in Sam’s Kelly kettle, an ingenious device that boils water using a small amount of firewood, without the fire risk and ground scorching of an open fire. After tea and coffee, David, who is no stranger to wild camping having bagged every Munro in Scotland, is zipped into his lightweight tent and asleep while Timmy is still contemplating his borrowed bivvy bag. Meanwhile, Sam sets up a tarp for me, using my bike as a support at one end with the removed front wheel at the other (see the final variant in our tarp shelter video), which creates a cosy shelter with a surprising amount of headroom. With an inflatable mat on top of the long grass in the meadow, it makes for a far comfier bed than I was expecting. 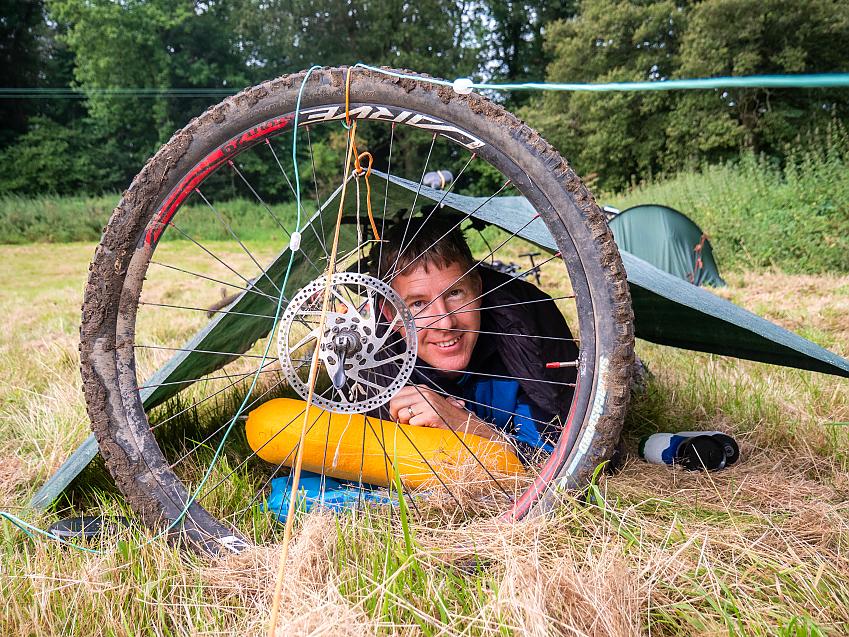 The tarp shelter in action

Indeed, I am only stirred from sleep by the sound of others starting to pack up. It’s nearly 7am and the sun has long since risen – as has photographer Robby, ensuring there are plenty of pictures of us snoring obliviously. Sam’s chosen bivvy spot reveals its true colours in the morning: a natural bowl facing the early sunlight with a patchwork of golden fields and misty woodland beyond. All is peaceful even here in the supposedly crowded commuter belt – the only disturbance coming from Timmy who has realised everybody apart from him had an inflatable pillow.

With work calling (it is Thursday morning, after all), we brew a quick hot drink and pack up, before rolling downhill and back towards Guildford. First, we take a diversion to a less typical Surrey sight: a dozen or so white storks, part of a rewilding project that aims to bring these birds back to the English countryside for the first time in 600 years. After a few breakfast blackberries from the adjacent hedge (OK, I lied about no foraging), we head for the Downs Link, a former railway (and therefore pleasingly flat) and the last leg of our trip. 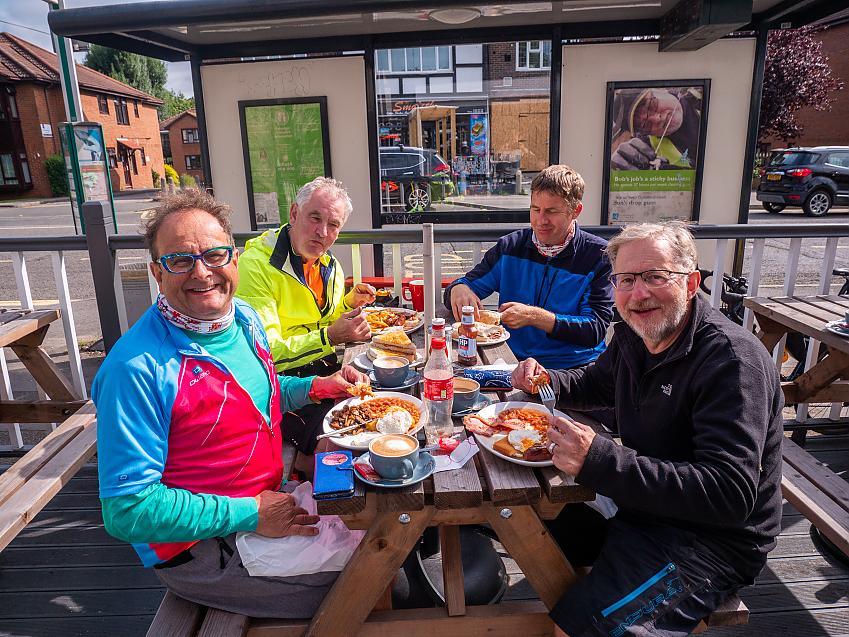 Or almost last. We’re not roughing it, remember, so shortly before reaching the office we stop in the sun outside a local café and set about replacing all the calories we have burnt since yesterday evening.

So, sand and nettles aside, was a good time had by all? “I have done quite a lot of rough camping in Scotland, through necessity (there is often no alternative in the wilder parts) but I still always get a buzz from the experience of getting away from normality,” says David. “Getting off the daily treadmill to do something very basic: just survive.  It reminds me of walking the Camino, where your greatest worry, from day to day, is deciding where you are going to sleep and eat - finding shelter and sustenance.

The final word from our guests goes, as I suspect it usually does, to Timmy: “'I'd recommend making sure of an Utterly Brilliant night wild camping, and remember to take an inflatable pillow (or a mallet). Unless you want to be wide awake...!” 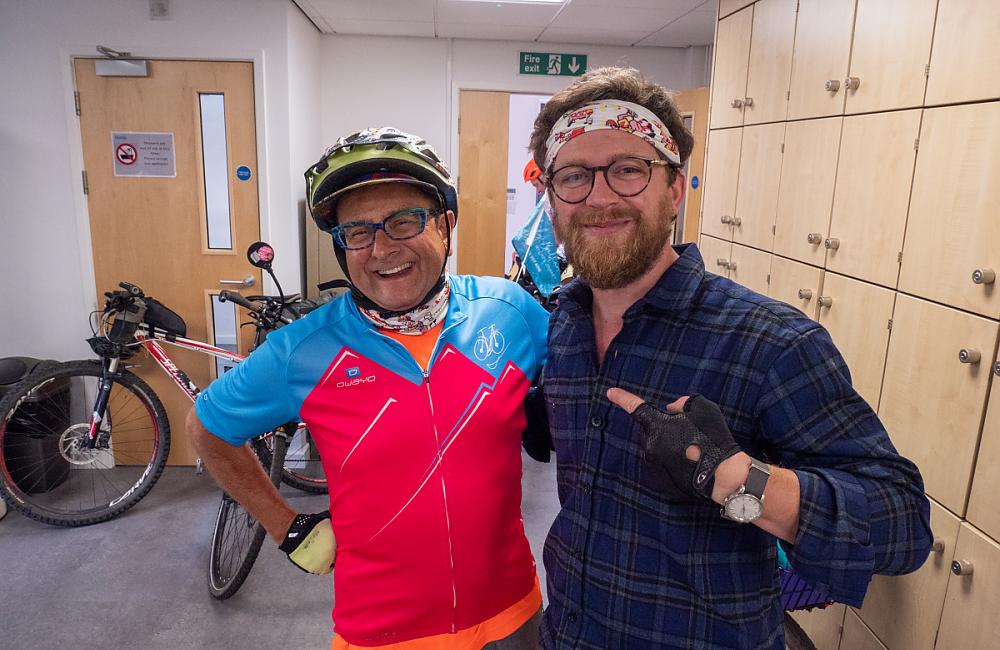 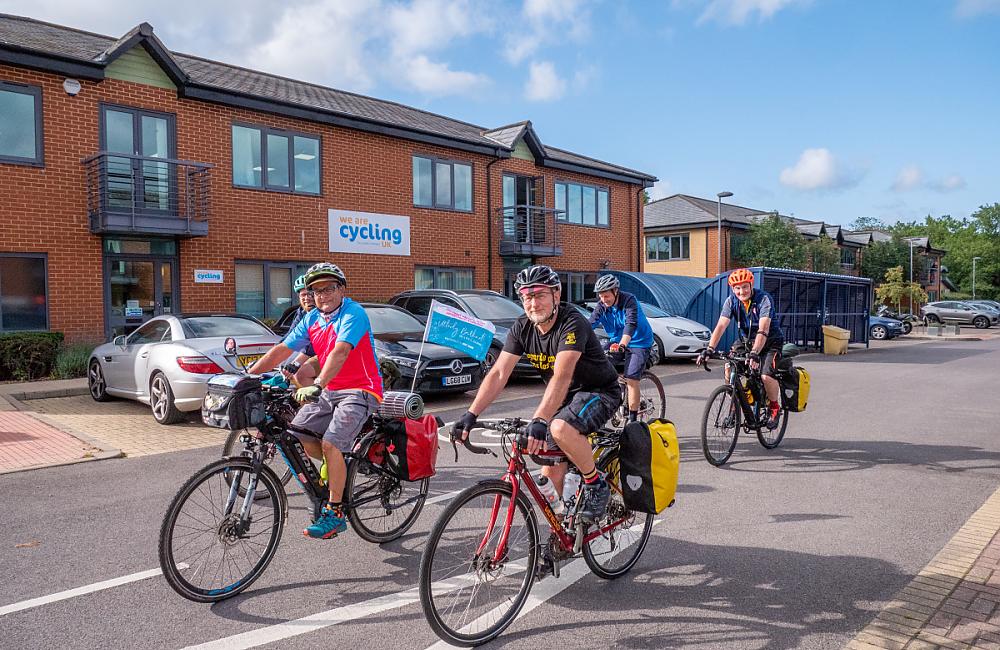 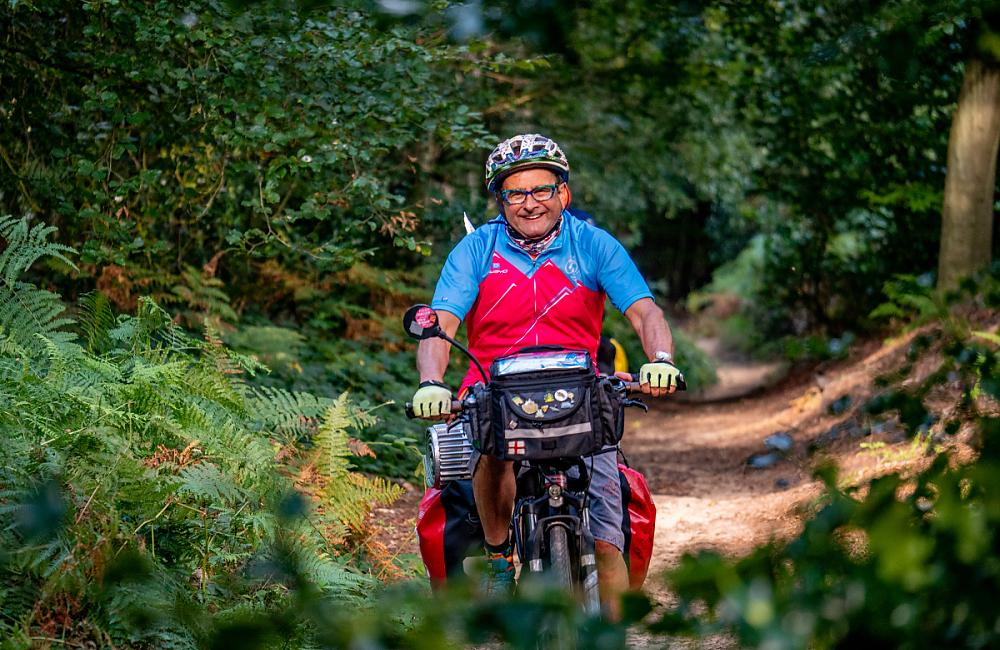 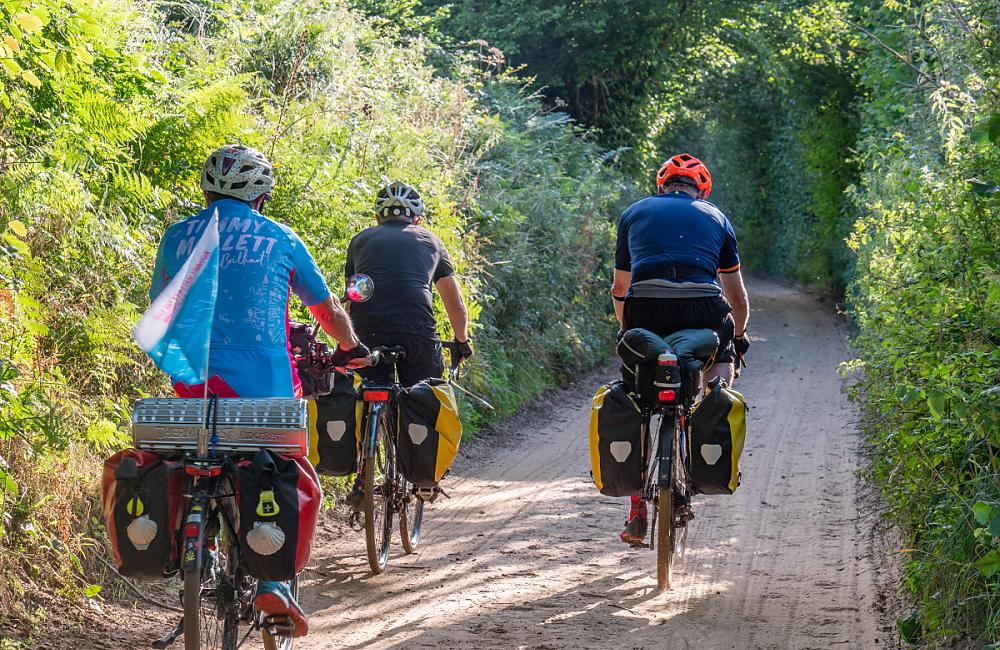 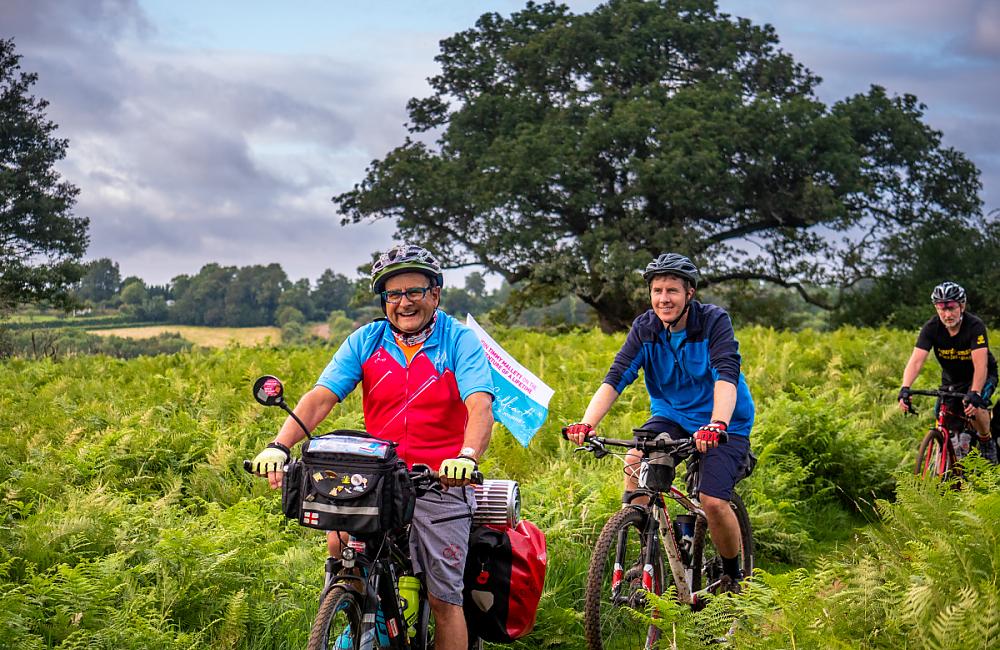 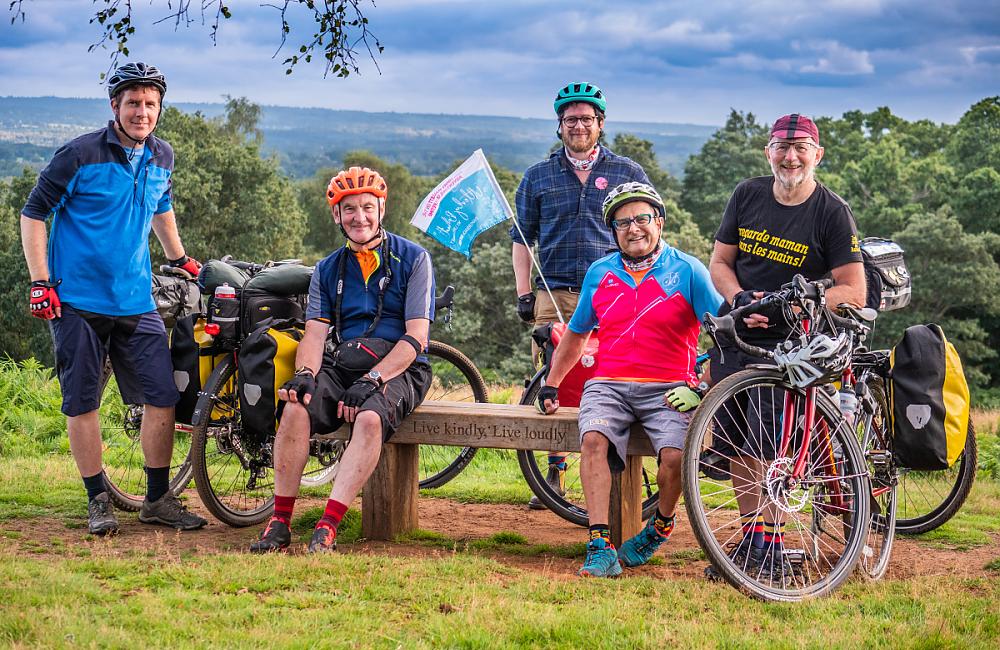 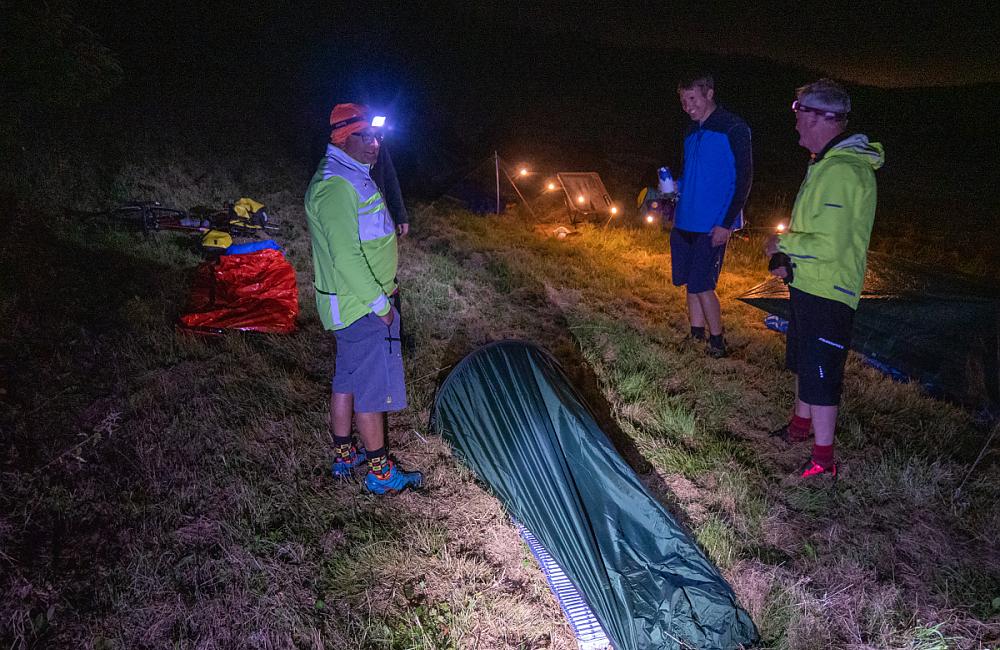 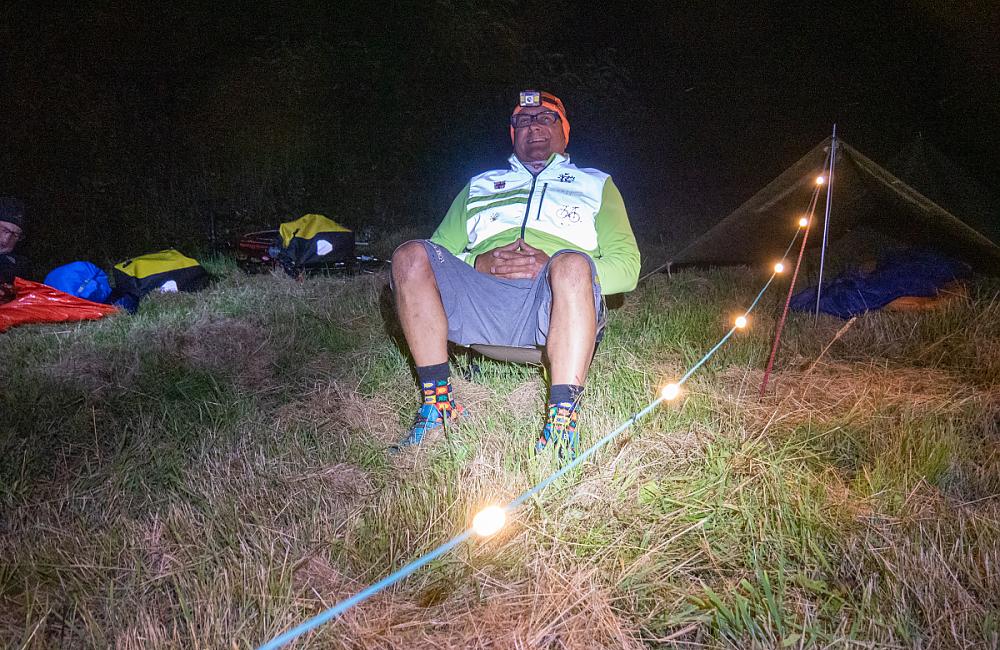 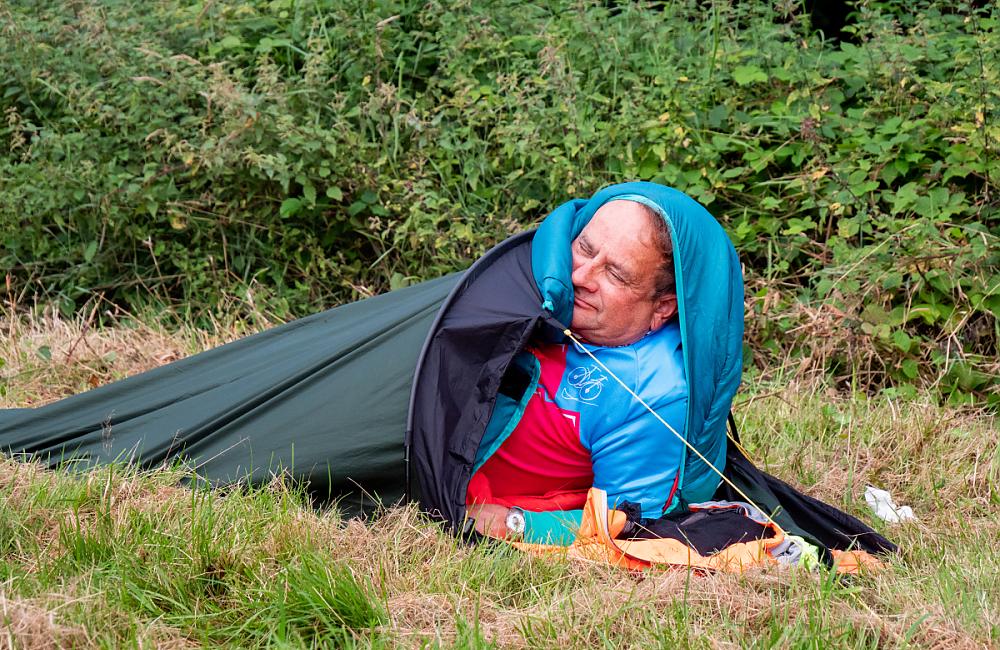 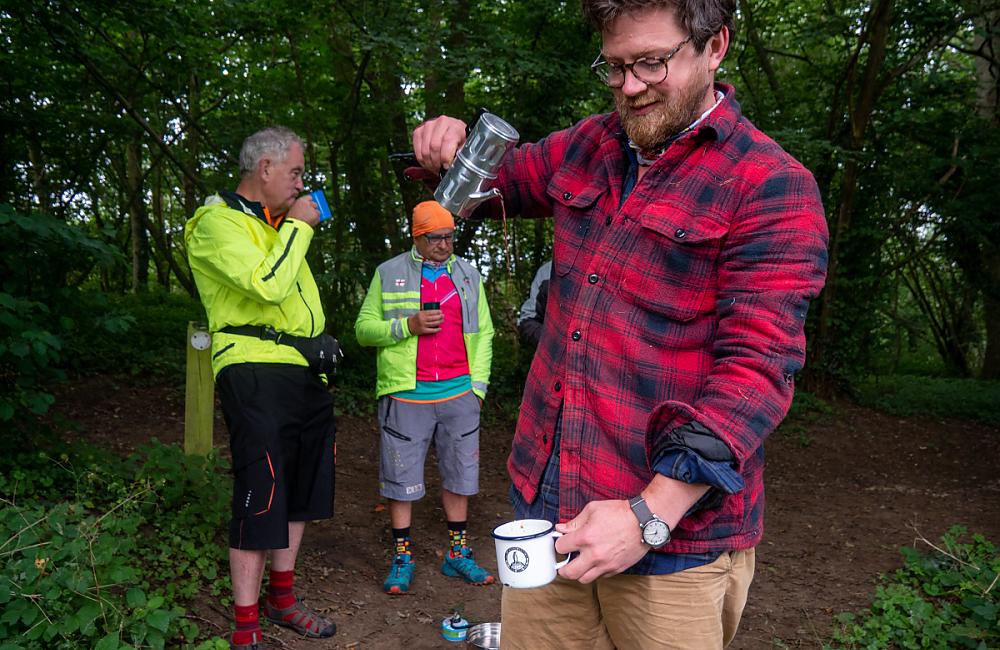 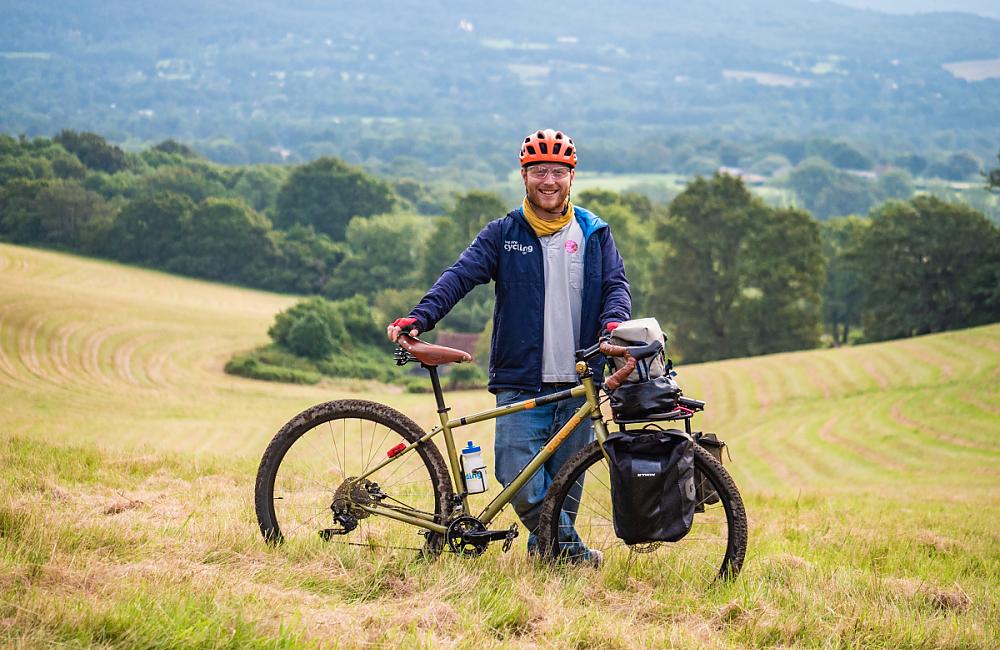 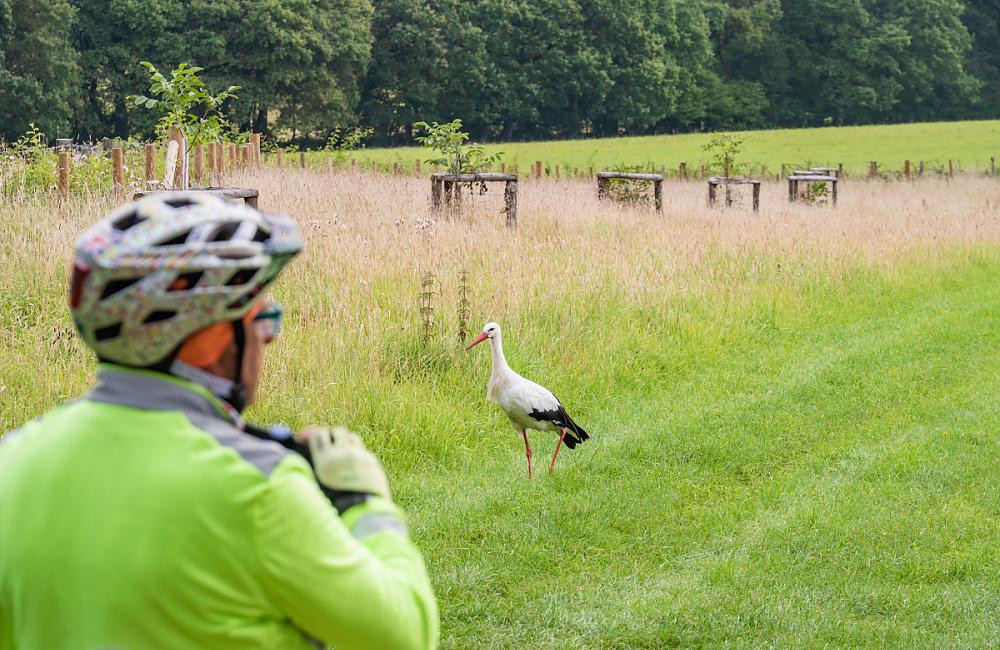 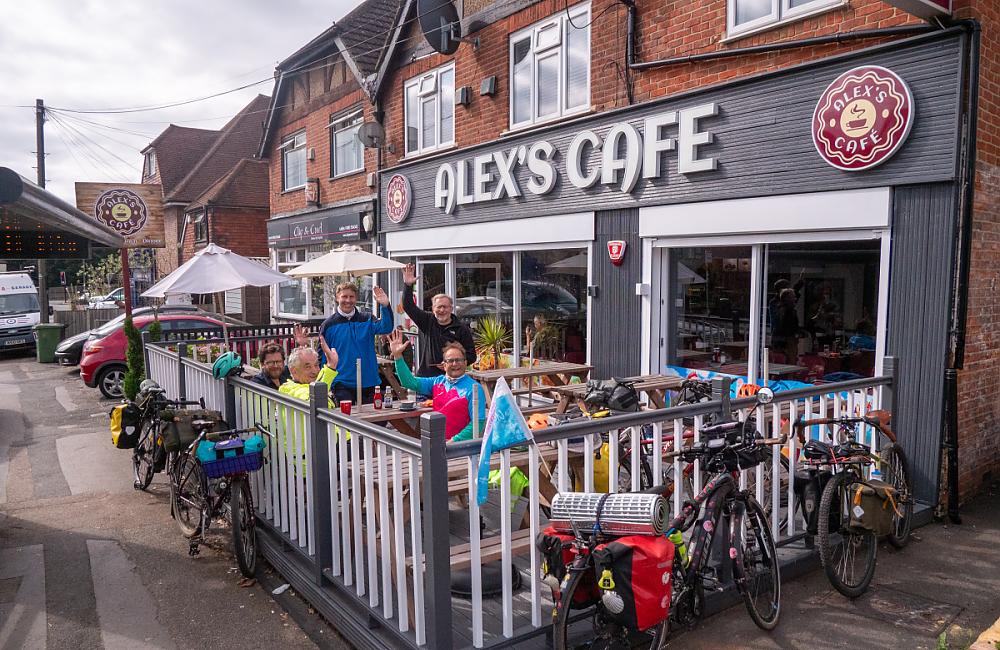 How to get involved

Cycling UK and OS Maps are teaming up in 2021 with a view to help more people discover and enjoy the outdoors which exists right on their doorstep and #12nightsoutin1year is their year-long outdoor challenge.

The challenge is simple: entrants are encouraged to head out on their bike and experience a night beneath the stars, in a tent, bivi bag or hammock, at least once a month over the course of a year and to photograph their experiences.

Each month, those who post their photos and experiences on Instagram using #12nightsoutin1year and tagging in Cycling UK and OS Maps will automatically be entered into a monthly competition to win a range of cycle and navigation related prizes. For full terms and conditions please see the #12nightsoutin1year homepage.

How to leave no trace when you're out cycling View