Transport cycling can be affordable even when it requires a new bike. Dan Joyce tests the Revolution Courier Race and Vitus Vee 27, both under £400. This review was written by Dan Joyce and first published in Cycle Magazine in August 2014.

Judging by what I've seen around universities lately, the typical student bike is a cheap hack: an old mountain bike or a second-hand hybrid. Students don't have much money, and bike theft tends be high in university cities. Even if they're getting a new bike, it makes sense for it to be basic and affordable: a roadster, like those we reviewed in the June/July 13 issue of Cycle or a budget hybrid like one of these city bikes. They're not specifically student bikes; they could be urban runarounds for anyone.

Revolution is Edinburgh Bicycle Cooperative's own brand. The original Courier was a good value urban mountain bike with single chainring and an 8-speed derailleur. This Courier Race is much the same, except it uses 700C wheels.

The Vitus Vee 27 is the geared equivalent of the Vee 1 that we tested in the Feb/Mar 2012 issue (bit.ly/. It's a rigid-forked urban mountain with 26-inch wheels - a rare configuration nowadays.

Neither bike comes with transport cycling essentials: mudguards, a pannier rack, and lights. While that's par for the course in the UK, it means that you'll ultimately pay more to have these 'accessories', because you can't buy them as cheaply as manufacturers can. And it's likely to be you that has to overcome any issues fitting them. I think online cycle retailers ought to offer clickable à la carte build options, like online computer retailers. That way you could 'accessorise' your new bike at point of purchase, as you might in a bricks-and-mortar shop (which, to be fair, Edinburgh Bicycle Cooperative and Chain Reaction Cycles also have).

Both bikes have aluminium frames and high-tensile steel forks, and both are finished in a utilitarian black. I tested the middle-sized bike from each range. Frame geometry isn't radically different; the Courier Race is a bit longer from saddle to handlebar, but that's more to do with stem and seatpost.

The Courier Race has the better selection of frame eyelets: two sets at the rear dropouts, so a rack and mudguard don't have to share; mounts for two bottles; and an extra set on the fork legs to fit a low-rider rack. Whether you'd want to burden this bike with four panniers is debatable. The frame doesn't have cable stops for a front derailleur, the expectation being that you'll stick with a single chainring.

The Vee 27 is essentially a mountain bike, so it has a reinforcing gusset under the down tube where it meets the head tube, as well as clearances for fatter tyres. The frame even has disc brake mounts. Yet you can still fit a rear rack and mudguards. As there's more space under the fork crown than there is under the front V-brake, you'll need to extend the front mudguard's bracket to stop the guard fouling the brake.

The Courier Race keeps things simple by eschewing a front derailleur. A chainring guard stops the chain derailing on the outside - and helps prevent trousers from getting caught in the teeth - while a dogfang style guide mounted on the down tube stops the chain falling off on the inside. Both worked fine; I never lost the chain. The lack of a front mech means there's less to go wrong, which is a bonus on a bike that might receive only cursory maintenance. You do miss out on overall gear range. Here the missing gears are at the bottom, because the single ring has 44 teeth. I'd prefer a 36 or smaller, since with 8-speed at the back you're limited to a 32 big sprocket - or 34 with MegaRange. Altus is way down Shimano's off-road groupset hierarchy, but in practice it shifted more snappily than the Sram X5 of the Vee 27.

The gear range of the Vee 27 is obviously wider: it's a 27-speed bike. I'm glad that Vitus have stuck with 'mountain bike' rather than'trekking' chainrings. I never found myself spinning out on the 42/11 top gear and I was grateful for the 22 inner when I took the Vee 27 off-road.

Apart from gears, the main difference between the bikes is the wheels. Both use inexpensive tyres, but the 32mm 700Cs of the Courier Race roll noticeably better than the 26×1.95in semi-slicks of the Vee 27. Fatter tyres mean better shock absorption, on the other hand; the Vee 27 is unperturbed by potholes and is properly off-road capable. With 36 spokes apiece in smaller diameter rims, the Vee 27's wheels are stronger too. I didn't have any problem with the 32-spoke wheels of the Courier Race, and there is room for fatter tyres - up to about 47mm - if you wanted them.

Both bikes have quick-release wheels that could easily be stolen by an opportunistic thief if you parked in public. Allen bolted skewers would be an improvement. Security skewers requiring a specific key (e.g. Pitlock) would be better yet, but I wouldn't expect them on a budget bike. (Both bikes do at least use allen-bolted seat collars.)

It's nice to see lock-on grips on the Vee 27. They won't fall off by accident or gradually come loose. The Courier Race, meanwhile, has an adjustable stem. This is useful if you haven't yet found your preferred handlebar position, but I'd swap it for a conventional 10cm stem.

Both bikes offer a single transverse hand position. I preferred the wider bar of the Vee 27, and it jars your hands less because this bike uses fatter, lower pressure tyres. I'd fit bar ends to the Courier Race. On the other hand, the holey saddle of the Courier is a little more comfortable to ride in trousers with thick seams, such as jeans.

The Vee 27's 26×1.95 tyres are draggier on tarmac. Whether that matters, given that most trips made on this bike will be under five miles, is moot. You could switch to budget slicks, such as Schwalbe City Jets. Or you might want to invest in touring or off-road tyres; this isn't just a city bike.

The Courier Race is brisk on road but only suits smoother surfaces and easier gradients. That's because of the narrower tyres and the limited gear range. Even on road, a 37in bottom gear is steep. I was often in first gear and wanting something lower. Dancing on the pedals is fine on a singlespeed but somewhat defeats the purpose of derailleur gears.

Vitus Vee 27 is a reasonable city hybrid that's really a do-anything bike - a hybrid in the true sense. The tyres might be a bit stodgy and the gears a bit hesitant, but if you need one bike for transport, touring, and off-road riding, it's a value-for-money option."

The Revolution Courier Race is a spartan city hybrid whose simplified gearing saves maintenance. It's a shame the gears don't go lower, but if you're athletic or live somewhere without serious hills, you might not mind. Corners have been cut primarily in terms of missing equipment such as mudguards; the quality of the components you do get is as good as you'll find on a £350 bike. Purely as a street bike, it's the better of the two here.

Where the similarly unequipped Vitus Vee 27 scores is in terms of versatility. It's a reasonable city hybrid that's really a do-anything bike - a hybrid in the true sense. The tyres might be a bit stodgy and the gears a bit hesitant, but if you need one bike for transport, touring, and off-road riding, it's a value-for-money option; as Cycle went to press in July 2014, it was selling for £320. 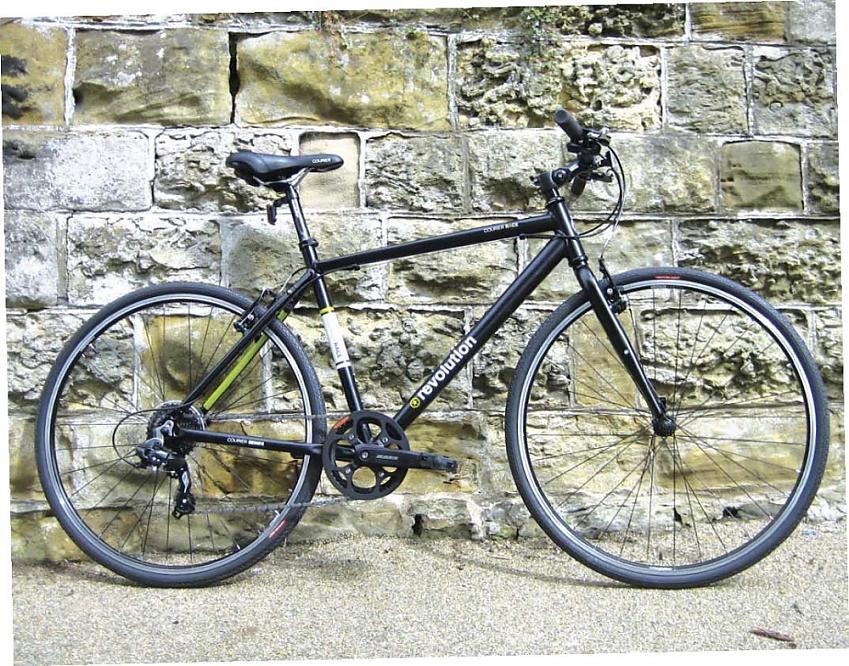