Rose combined her love of cycling with her dedication to the suffragette movement
By Sheila Hanlon
Saturday, 3 February 2018

On the centennial of the 1918 Representation of the People Act, when the vote was first granted to women in Britain, Cycling UK's Historian Sheila Hanlon looks at the life and legacy of Rose Lamartine Yates, the cycling suffragette who was the first woman to be elected to the CTC council.

Rose Lamartine Yates made Cycling UK history in 1907 when she became the first women elected to the club’s council. This was an achievement of note at a time when women did not yet have the parliamentary vote in Britain. During her campaign, Rose claimed that she was not a suffragette, but her attitude changed the following year. In a speech entitled “How I became a suffragist,” she explained that, “Just a year ago when speaking at a meeting of the Cyclists’ Touring Club in London…I made the statement that I was not a suffragette. It was an honest statement, yet untrue, for on looking into the matter seriously I find I have never been anything else.”

Rose Lamartine Yates (née Janua) was born 23 February 1875 in Lambeth, London. Her parents, Elphege and Pauline Janue, were language teachers who moved to England from France. Rose attended school in Clapham, Truro, Kassel and Paris before studying languages at Royal Holloway College in 1896. In 1899, she passed the final honours examination in Modern Foreign Languages and Philology at Oxford, though as a woman she was not eligible for a degree.

Cycling and the CTC

Rose was an avid cyclist. She joined the CTC in 1900, the same year she married fellow CTC member and solicitor Tom Lamartine Yates. The couple were introduced to each other by Rose’s parents, but cycling brought them together. They initially lived in Torrington Square, Bloomsbury and moved to Dorset Hall, Merton in 1906. They had one child, Paul, who was born in 1908.

The couple rode with their club and enjoyed country escapes along the popular Portsmouth Road cycling route. They embarked on bicycle tours through Ireland, Scotland, France and Germany. Rose could often be seen wearing her brown Saxony cloth CTC uniform.

Tom and Rose were active CTC members. Tom served as a solicitor on CTC legal cases, while Rose followed club politics. As a female member of the club, Rose enjoyed the same rights and privileges as men, including the ability to vote in council elections. Women had first been admitted to the CTC in 1880, and although a few female candidates ran for council none were successful until Rose’s 1907 victory.

The CTC Gazette characterised the 1907 council election as a heated battle between longstanding members and modern reformers. Rose ran in Surrey as a reform candidate. In a letter to editor, Rose reassured members that “Reform is essential to the life of our club…If you elect me…I shall endeavour in truth to represent my elector’s wishes.”

During the CTC election campaign, Rose denied being a suffragette. Nonetheless, she was equated with the women’s movement. The influential cycling journalist Kuklos (William Fitzwater Wray), after hearing Rose speak in Birmingham, attempted to discredit her in The London Daily Cycling News, 30 November 1907 by stating “she entered into the fray with almost with the enthusiasm of a Suffragette.” We know from her post-election speech that she sympathised with women’s suffrage, even if she did not identify as a suffragette.

Rose was one woman among 68 CTC councillors in 1907. She also served as the only woman on the Roads Improvement Council. She remained on CTC council until resigning in 1915. 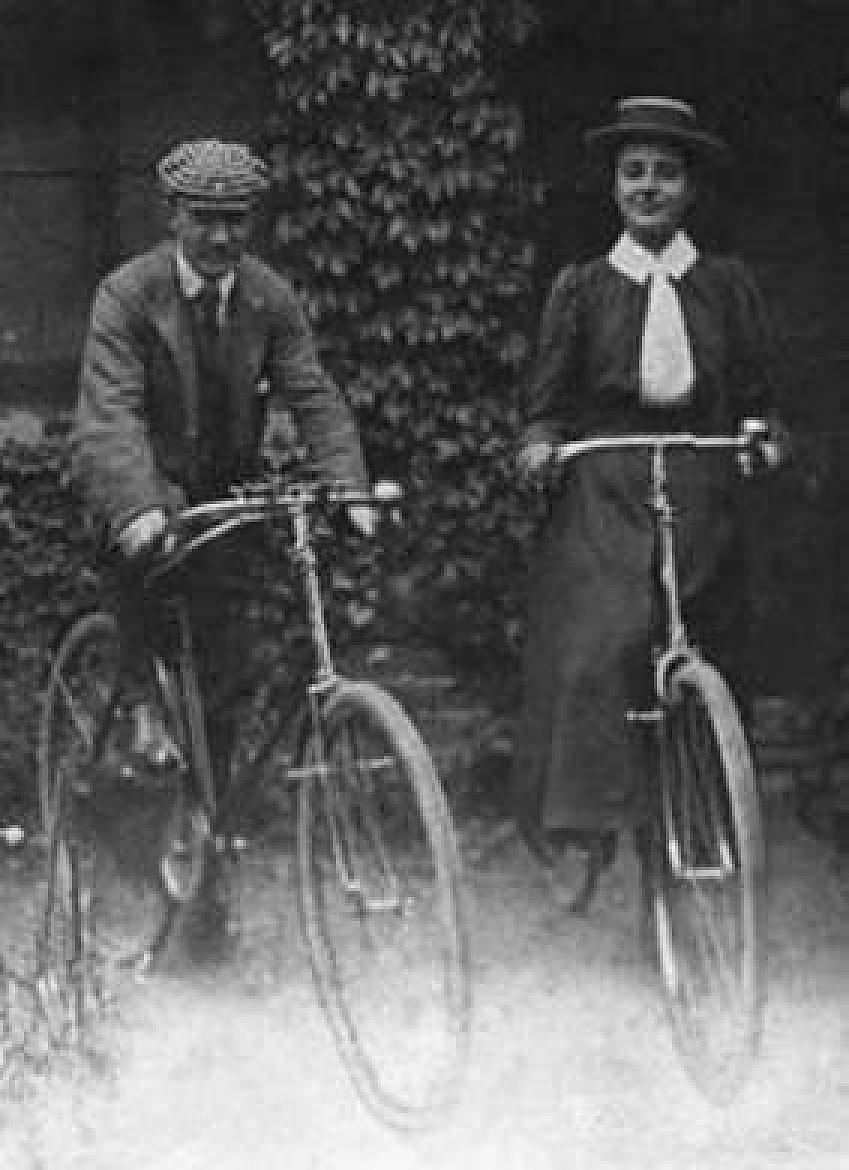 Freedom’s Cause: The Suffrage Years

Rose was no stranger to women’s inequality. She was denied an Oxford degree due to her sex and grew frustrated by gender-biased laws while training as a solicitor in Tom’s office. If the status of women was to be improved, Rose thought, they needed the vote.

In January 1909, Rose joined the Wimbledon branch of the Women’s Social and Political Union. On 24 February she marched with a WSPU deputation from Caxton Hall to the House of Commons. The suffragettes’ objective was to present a petition to Prime Minister Asquith about the omission of women’s franchise from the King’s Speech. Rose was one of 28 demonstrators arrested and charged with obstruction during the protest.

Tom defended his wife in court. During the trial, Rose delivered a powerful speech:

Punch magazine responded with a verse demonising Rose for choosing suffrage over motherhood, “Mother’s Sacrifice.” Rose was sentenced to a month in Holloway Gaol. Merton Cycling Campaign member Hugh Morgan’s excellent article on Rose, a copy of which can be found in the National Cycle Archive, reveals that her letters from prison to Tom mentioned the CTC.

Upon her release from prison, Rose’s dedication to the cause intensified. By 1910, she was treasurer and honorary secretary of the Wimbledon Branch of the WSPU. A talented speaker, she lectured on her prison experience and spoke at the WSPU’s Hyde Park rally in July 1910. Her Sunday addresses on Wimbledon Common attracted crowds in the thousands, one of which was dispersed by 300 police officers. While on a lecture tours, Rose visited Eagle House in Batheaston, a well-known suffrage rest, where she planted an Austrian pine in the “suffragette arboretum.”

Rose made fast friends in the WSPU, including fellow cyclist and Royal Holloway student Emily Wilding Davison. Rose was at Davison’s bedside on 8 June 1913 when she died of injuries sustained at the Epsom Derby. Rose accompanied Emily’s body back to London and stood guard in her funeral procession. Tom represented the Davison family at the inquest into Emily’s death.

Dorset Hall became a refuge for WSPU hunger strikers recuperating from prison. The Women’s Who’s Who for 1913 reports, rather excitingly, that the Yates “were suspected of holding Miss Christabel Pankhurst in hiding at the time of her escape from the clutches of the law.” Rose planted her gardens in the WSPU colours: purple, white and green. The front lawn served as a convenient location for fundraising teas, and produce from her vegetable patch was sold in the WSPU shop to fundraise for the cause. 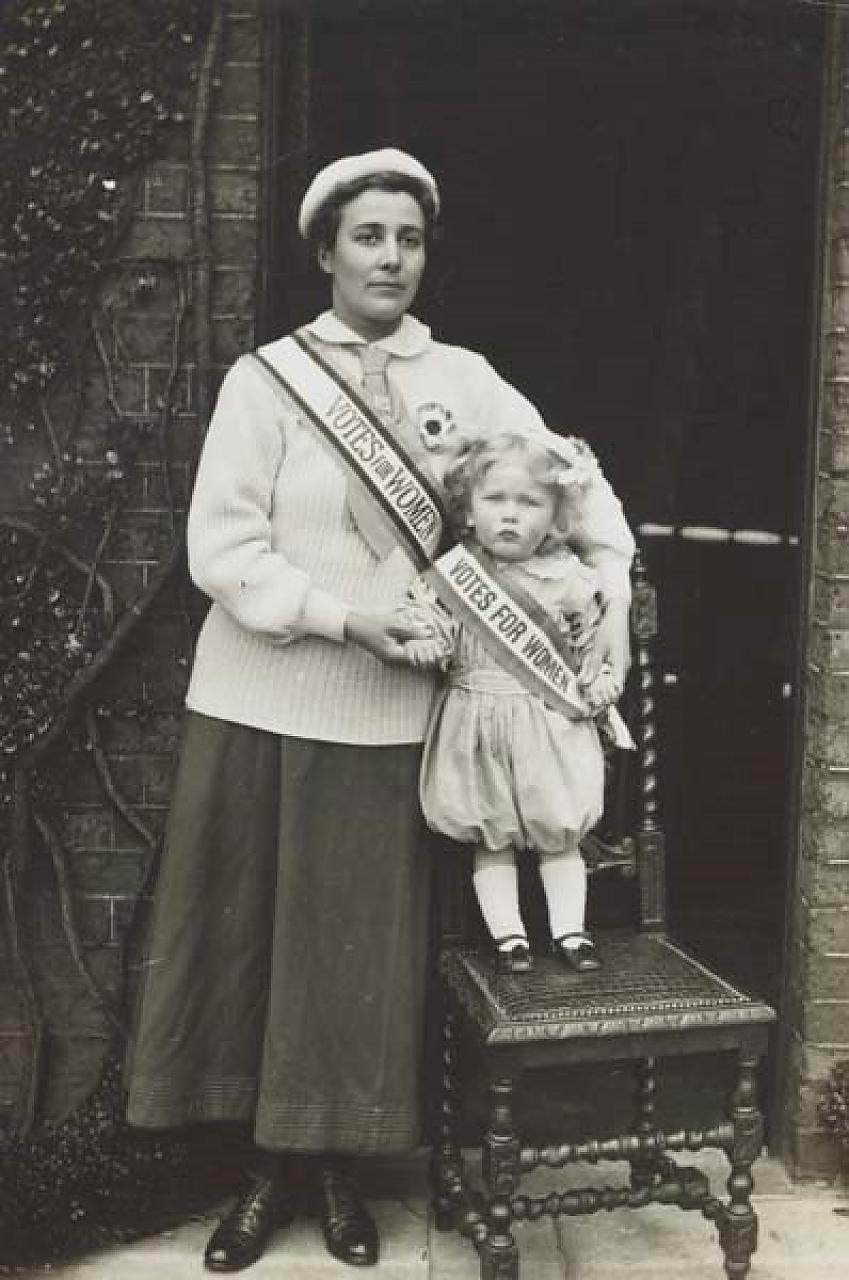 Many suffrage campaigners were cycling enthusiasts, including WSPU founders Christabel and Sylvia Pankhurst. The bicycle, a symbol of women’s emancipation since the 1890s, proved useful to the suffrage campaign. Bicycles were adapted for everything from delivering pamphlets to providing get away vehicles for militants.

The London WSPU organised a brigade of “Cycling Scouts” who rode out into the suburbs to hold campaign meetings. There was even a “Votes for Women” brand bicycle painted in the colours of the union.

WWI and 1918 The Representation of the People Act

When war was declared in 1914, the WSPU suspended their campaign. To do her bit for the war effort, Rose organised a two soup kitchens in Merton.

Rose believed the women’s suffrage campaign should continue during the war. In October 1915, she held a meeting at Caxton Hall criticising Christabel and Emmeline Pankhurst for abandoning the cause. Two months later, Rose founded the “Suffragettes of the WSPU,” a splinter group dedicated to the vote.

On 6 February 1918, The Representation of the People Act granted the vote to women for the first time, enfranchising women over the age of 30 who met the property qualification. After this national victory, Rose turned her attention to local politics. She was elected to the London County Council (LCC) as an Independent candidate for North Lambeth in 1919. While serving on the LCC, she lobbied for better public housing, school improvements, and equal pay for men and women. True to her cycling roots, she opened the LCC’s first cycle lane on St. Helier Avenue, Morden.

A Cycling and Suffrage Legacy

Rose Lamartine Yates’ accomplishments were numerous: from being the first women elected to the CTC council, to serving as a leading figure in the suffrage movement, to her work as an London county councillor. In addition, she founded the Women’s Record House in 1939, a forerunner to the Suffragette Fellowship Collection of the Museum of London and The Women’s Library at LSE; bequeathed Dorset Hall to the Merton and Morden Urban District Council in 1935; served as governor of the London Academy of Music; founded a children’s clinic in Waterloo; and was involved in the Women’s Consultative Committee of the League of Nations.

One of her lasting legacies as a cyclist was donating the bicycles ridden by her and Tom to the CTC Museum in 1933.

Pre-deceased by Tom in 1929, Rose died on 5 November 1954. The Merton Cycling Campaign once proposed a memorial statue to acknowledge Rose as a pioneering cyclist and suffragette. A blue plaque is currently under consideration for Dorset Hall.

Rose Lamartine Yates was a champion for cycling and suffrage at a critical time in the history of democracy. On the eve of the 1918 centennial of the Representation of the People Act, Cycling UK can be proud of the contribution of their cycling suffragette. 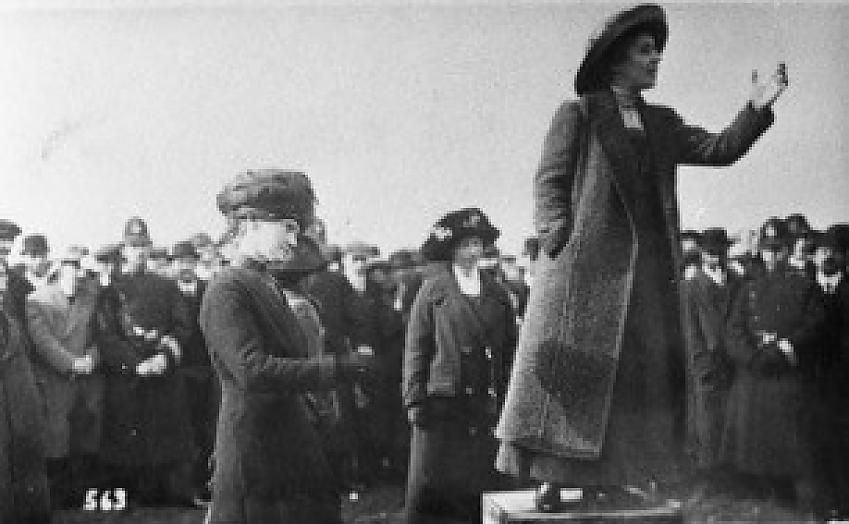 Special thanks to Hugh Morgan of the Merton Cycling Campaign for sharing his research on Rose Lamartine Yates.

Riding the Surrey Hills on the trail of the suffragettes View

History View
You too can champion cycling in the UK
Give your support today to help Cycling UK’s charitable work tomorrow. We double every pound you give through other sources to help change lives and communities through cycling.
Volunteer now
Cycling UK continues to support the UK to cycle
This remains true during this difficult period with the ongoing threat of coronavirus Covid-19
Read our latest advice on cycling