First BTC Council meeting in1880. Photo from our collection at the National Cycle Archive.
By Sheila Hanlon
Tuesday, 8 May 2018

Cycling UK has 140 years of history saved at the National Cycle Archive. There are paintings, letters, photographs, adverts, stories, ride reports and films of cyclists. Cycling UK's Historian Sheila Hanlon explains how you can start your own family research to uncover your family's cycling history and how family heirlooms that may inspire you to begin your quest.

Family heirlooms from Cycling UK’s past

It is always a delight to find photographs, memorabilia and stories from the golden days of cycling past. Could your house be hiding its own cycling treasures - in an attic or a dusty cupboard drawer?

A few recent finds shared with Cycling UK led us to ask how family researchers can find out more about their cycling heritage.

Last year Rosalinde Rosse from New York wrote to Cycling UK to share a cycling heirloom that has been in her family for three generations. Rosalinde's grandfather Joseph Koechlin was a flourmill operator from Voorburg, a quiet suburb of The Hague. In 1889, he joined the CTC and  received a circular paper membership roundel with a club-branded metal badge. His daughter Cornelia - Rosalinde’s mother – brought the medallion with her to America when she emigrated in 1952. It must have been a treasured family artefact to survive such a long journey through distance and time. 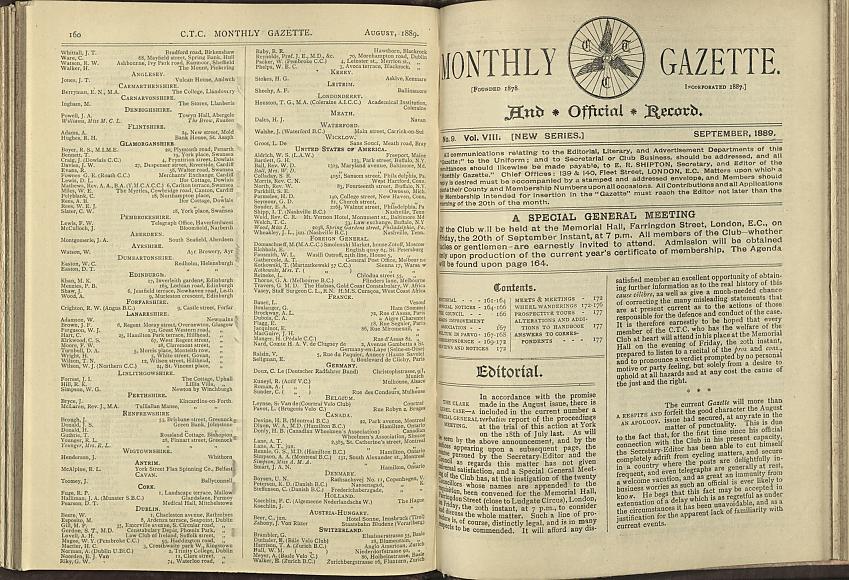 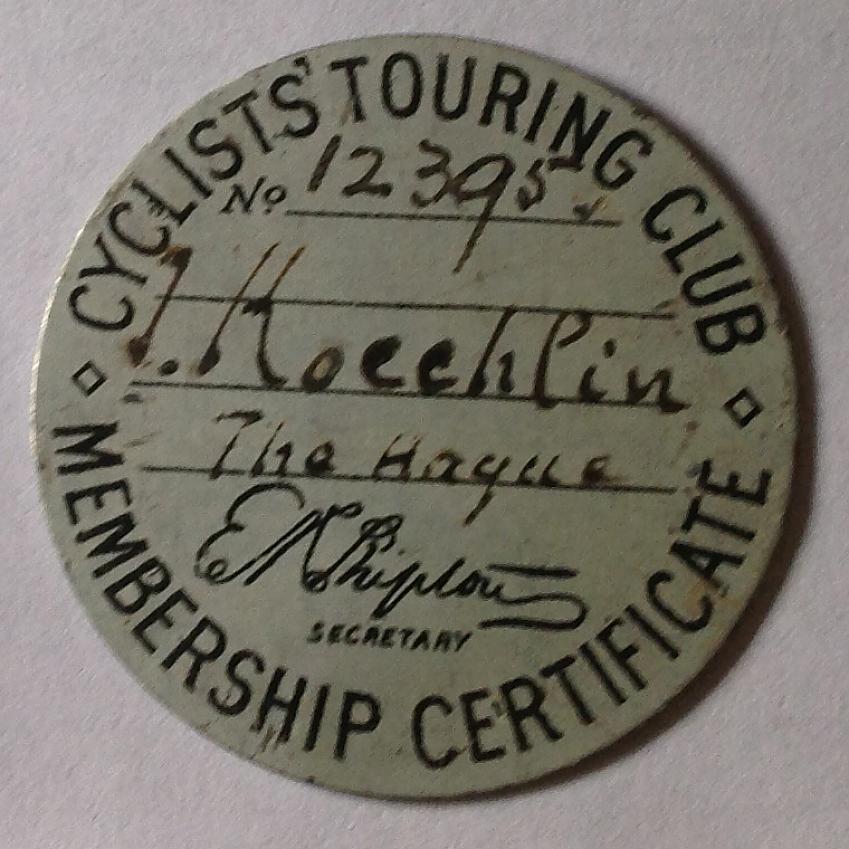 Treasure number two came from Peter Ellis, who wrote to us to about his great grandfather’s original CTC membership certificate and a collection of historic cycling photos. His certificate shows that GJ Ellis of Oswestry, Shropshire joined the CTC in 1891 as member number 8,069. The Ellis family built and sold bicycles, and one of Peter’s photographs shows Thomas H Ellis’ well-appointed cycle shop and engineering works. Other family photos show a couple posed with a bicycle, several racing bicycles and a tall trick bicycle. 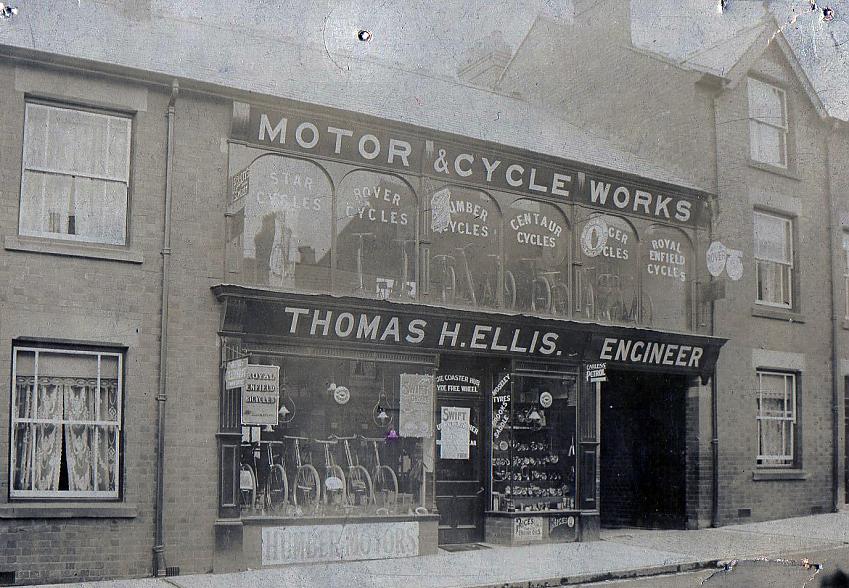 Our third treasure is a journal, 'The Diary of a Touring Cyclist in the 1930s' written by Reggie Johnson. Reggie’s son Carl produced typeset copies of these handwritten journals as family mementos when his father passed away. Reggie, a chemist from Clapham born in 1911, was fiercely proud of his membership in the CTC. He loved countryside cycle tours to the Cotswolds, Hampshire and Wales. His spirited diary reveals some wild adventures on the open road, illustrated with Brownie camera photos, some of which show Reggie in his famous ‘all-weather shorts. 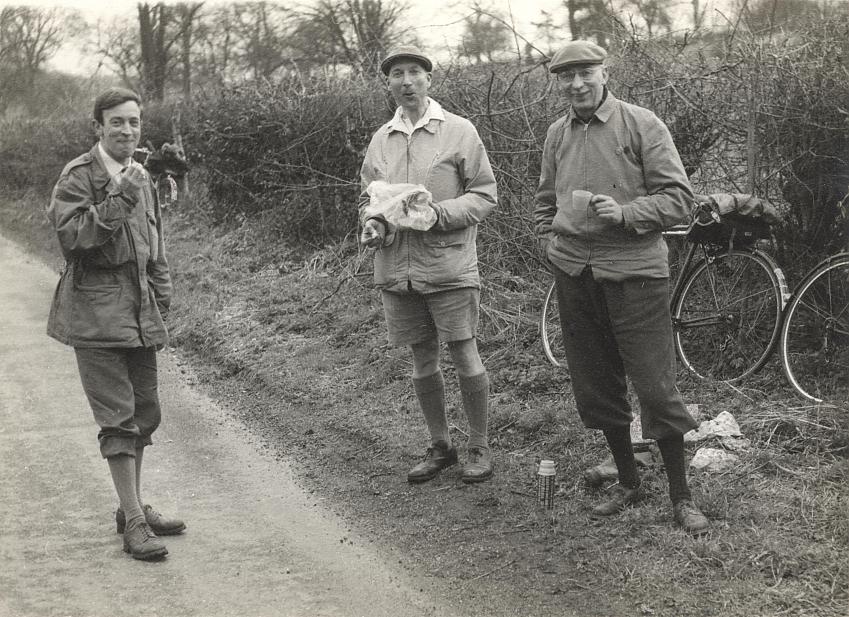 Rosalinde, Peter and Carl’s family heirlooms connect them to their cycling ancestors – you can learn more about their history by visiting the archives.

Finding your family in the National Cycle Archive

The National Cycle Archive contains over 11,000 items, says Martin Saunders, Senior Assistant Archivist at the MRC. “It’s the largest and most diverse in the country relating to cycling as a sport, leisure activity and industry.”

The MRC is also a leading institution for genealogical research. The archive specialises in trade union archives. Cycling has long been linked to working class politics, labour history and trade unionism. Some trade unions even had their own cycling clubs. Union lists for bicycle and cycling accessory manufacturers will be of particular interest. A helpful guide for genealogists using the collection can be found on the Modern Records Centre website.

Getting started by identifying individuals

Entering the names of your ancestors into the archive catalogue is the quickest way to get started, but don’t get discouraged if nothing comes up. Parts of the collection are catalogued by individual names, but in most cases it will take more digging to get results. Some personal papers are listed by name, such as those of John Boyd Dunlop (1840-1921), inventor of the pneumatic tyre. You may get lucky with a keyword search if your relative is mentioned in catalogue descriptors. Cycling champion Reg Harris (1920-1992), for example, gets 15 page results including photographs, press clippings, an autobiography, race programmes and slides.

Key figures in Cycling UK’s history are well-documented. There are boxes of records related to club founder Stanley Cotterell, including correspondence about club business. Those interested in Jeannie Welford, the CTC’s first female member, will find traces of her life in photographs, magazines, press clippings and membership records.

Regional records and local histories can help refine your search. You may want to browse the papers of a cycling club or CTC branch in the area where your relatives lived. The Essex CTC District Association, for example, established 1927, reported on events and people’s experiences in its club newsletter Spotlight.

Historic CTC membership lists are a go-to source for identifying individuals. Throughout the Victorian and Edwardian era, The CTC Gazette published the names and addresses of prospective members. Women’s names appear in italics to distinguish them from men.

If your relatives had the racing bug, the NCA’s collection of race result sheets will come in handy.

Even if your relatives are not mentioned by name, the National Cycle Archive will provide clues about their cycling experiences.

The collection boasts a vast number of photographs depicting cycling throughout history. You’ll find ephemera and artefacts such as badges, postcards, posters, event programmes and even fabric samples for Victorian uniforms. You’ll also discover cycling magazines, club newsletters and press clippings. Maps, guidebooks and travel writing can give you an idea popular cycling routes. Club scrapbooks are filled with everything from photographs to the menus from club dinners.

Several fascinating cycling diaries have found their way into the archive. The cycle journal of Emily Sophia Coddington, for example, follows the adventures of a lady cyclist from 1893-1895. Along the way, she met her husband and covered 1485 miles in one year. The Journal of J Foxley Norris 1903-1911 has been digitised for you to read online. Also of interest are decades worth of pocket-sized CTC cycling diaries and mileage sheets have been filled in with trip details.

To find out more about the bicycles your ancestors rode, you can look at cycle company catalogues, bicycle advertising, and pamphlets from cycling exhibitions.

Continuing your research beyond the National Cycle Archive

A number of other resources will help complete your cycling history research. The British Library holds material on all aspects of cycling, including books and periodicals from the 1870s to today. Information and artefacts related to the National Clarion Cycling Club are held at The People’s Museum, Manchester. The Raleigh Cycle Company Archive can be consulted at the Nottinghamshire Record Office.

Regional and local archives often hold material related to cycling. The records of the Leamington Cycling and Athletics Club dating to 1921, for example, can be found at the Warwickshire County Record Office. The Essex Record Office holds material documenting the history of this popular cyclists’ haunt.

A number of excellent books have been written about cycling history, such as David Herlihy’s Bicycle: The History (2004) and Michael Hutchinson’s Re:cyclist: 200 Years on Two Wheels (2017). For the history of the Cycling UK, see William Oakley’s Winged Wheel: The History of the first hundred years of the Cyclists Touring Club (1977) or James T Lightwood’s The Cyclists’ Touring Club, Being the Romance of Fifty Years Cycling (1928).

You may want to visit The National Cycle Museum in Llandrindod Wells, Wales, which collects bicycles through the ages from hobbyhorses to safeties. There’s even an online bicycle museum. 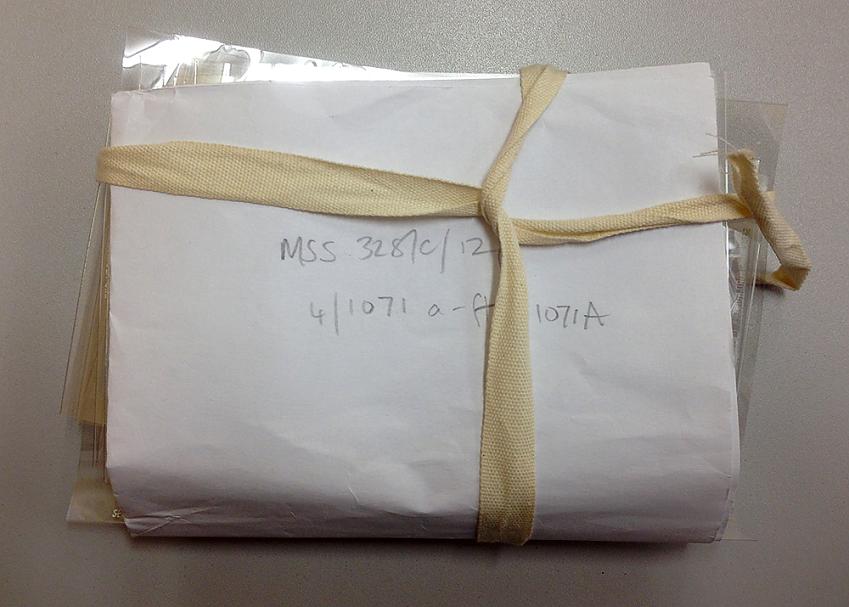 Do you have a cyclist in the attic?

Family collections are a wonderful place to look for cycling history. We’re grateful to all the people who have helped preserve Cycling UK’s history in their personal collections. If you have a cycling heirloom, why not find out more about it by visiting the National Cycle Archive?

From club memorabilia to photographs of your grandpa’s penny-farthing, you may have a family cycling history just waiting to be discovered!

Are you looking for an ancestor?  A guide by the Modern Records Centre, University of Warwick.

Cycling Resources by The British Library,

Resources for Genealogists The National Archives

London to Brighton by bike 150 years ago View

Does the history of cycling interest you? Then pedal back in time with CTC View
You too can champion cycling in the UK
Give your support today to help Cycling UK’s charitable work tomorrow. We double every pound you give through other sources to help change lives and communities through cycling.
Volunteer now
Cycling UK continues to support the UK to cycle
This remains true during this difficult period with the ongoing threat of coronavirus Covid-19
Read our latest advice on cycling