Norma with two of her granddaughters
By Victoria Heywood
Thursday, 6 September 2018

Cycling UK member Norma Cullen is making a remarkable recovery from a rare and life-threatening syndrome with the support of her beloved cycling club.

In October 2016, cyclist Norma found herself on the critical care unit in the Royal Cornwall Hospital. Within days she had gone from feeling slightly under the weather to fighting for her life on a ventilator. The diagnosis was Guillain-Barré syndrome, a rapid-onset muscle weakness where the immune system attacks the nerves.

“It started as just a tummy bug. Guillain-Barré syndrome tends to follow minor ailments, which we all get at some point,” says Norma. “I don’t remember the first three months, although I do vaguely remember Christmas - still on the critical care ward – with my family around me.”

When she did start to become more mentally present, she was still paralysed from the effects of Guillain-Barré.

I would be trying to share a joke. The staff were always wonderful, always including me even though they knew I couldn’t respond.

“It’s known as ‘locked-in syndrome’, a medical condition where only your eyes can move - one blink for yes and two for no. All I could do was answer direct questions and it’s very, very frustrating, especially as I am a real chatterbox.

“But I have most expressive eyes the staff had ever seen. With those eyes I could laugh, express pain, frustration.

“I would be trying to share a joke. The staff were always wonderful, always including me even though they knew I couldn’t respond.

“Then on 15 February, I was fitted with a speaking valve! I could speak! I could chat!”

Norma spent six months on the critical care unit, her doctors unsure whether she would ever recover. Thankfully, she made slow but steady progress and was eventually well enough to be transferred to Marie Therese House Rehabilitation Unit in Hayle to begin the next stage of her recovery. Although still paralysed, all the pipes and tubes had gone.

In all Norma spent 12 months at Marie Therese undergoing rehabilitation. Her family rallied around to support her, as did her friends from her local cycling group. 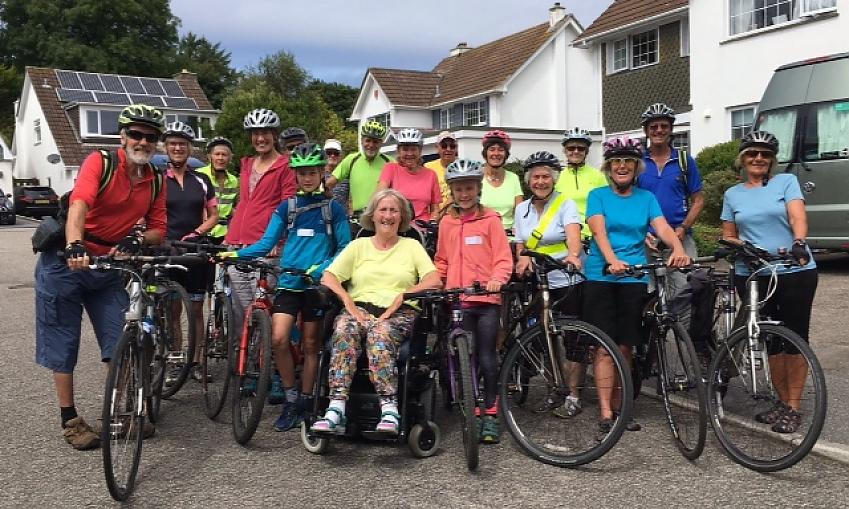 Norma with her cycling club and well-wishers

Norma credits ‘the girls’, as she calls them, in being a crucial part of her gradual recovery.

“What started off as the wives and partners of my husband’s friends branched out further. It’s lovely. We’re all from different walks of life and share a really amazing friendship,” says Norma, explaining the group’s history.

“The girls, as we like to call ourselves, although we’re anywhere between 60 and 80, meet every Tuesday afternoon. We do a three- to four-hour cycle, shorter in winter, but it’s still a laudable distance, although we undo all the good work by going back to the leader’s house afterwards for tea and cake. That is where we hatch different ideas, for mini breaks away or longer holidays with the bikes, like cycling through France. The group’s been going now for 12 years.

“They’ve been wonderful. When I was on the critical care ward I could only have close family as visitors. My birthday was in January, and my friends wanted to come and see me. It was allowed, just for five minutes, and they all came in their Lycra through the ward, singing happy birthday to me very quietly so as not to disturb the other patients.

“Tears just ran down my face.” 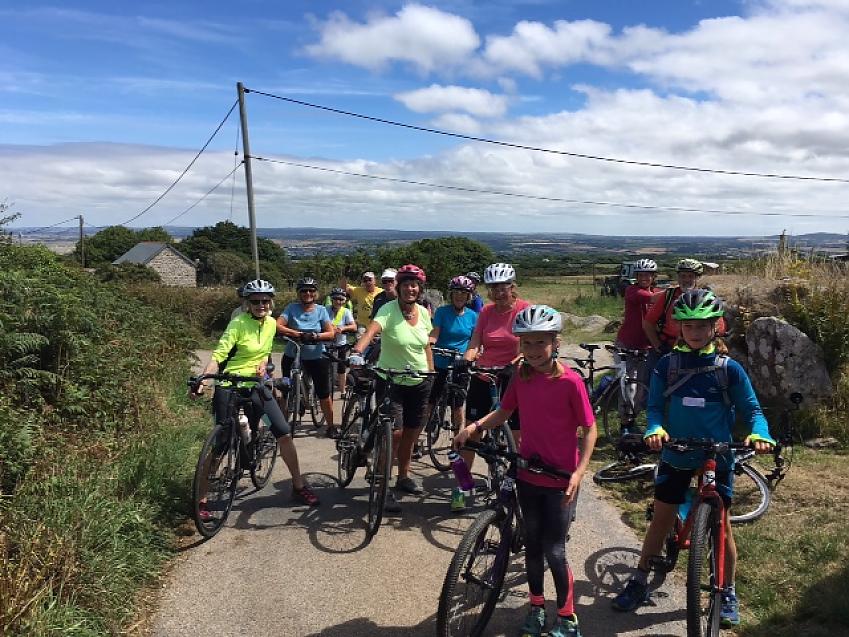 Norma managed to move home in March of this year, eighteen months after her diagnosis. Immediately, Norma began to think about ways she could bring something positive from her experience, and she, her daughter, Jo, and young grandchildren, Emily and Heidi, came up with the idea of a bike ride to fundraise for equipment for Marie Therese. Norma had seen for herself how more vital equipment could make a world of difference to the facility’s staff and patients.

“There is one piece of equipment called a Sara Stedy which helps people to stand. There was many a time when I was using it and just managing to pull myself up into standing, and there’d be knock on the door saying another patient needed it urgently. I’d sit back down and that would be my physio session for the day over,” says Norma sadly.

“But the staff were wonderful and encouraged me and showed me how to do different things.”

One of Norma’s cycling friends helped set up a fundraising page, and they set about planning their first event. On 7 August, Emily and Heidi led a 16-mile bike ride, following the same route that Norma used to lead with her cycling group. To date, Norma has raised almost £3000 for the Royal Cornwall Hospital's Charity and Gain, the national charity for those affected by Guillain-Barré syndrome.

I look out of the French windows out to the garden and I just pedal and use my imagination.

And Norma has a challenge of own. To push herself in her recovery and to mark her love for Cornwall, Norma is set on cycling 85 miles indoors, the length of Land’s End to Tamar Bridge, the exit into neighbouring Devon.

“It’s no substitute for the real thing,” says Norma. “But I look out of the French windows out to the garden and I just pedal and use my imagination.

“I would like to be back as part of the group. That’s certainly the goal. I think it’s a long time away – but watch this space.”