Short cranks are more useful when the frame is designed around them
By srymer
Tuesday, 28 November 2017

Though keen cyclists as teenagers, my wife and I would have been classic candidates for the Big Bike Revival back in 1995. Fortunately, our son abandoned a bike in our garage when he left home and I began using it. Shortly afterwards, we bought a new Raleigh Zing for Rosemary and we started exploring the cycle tracks around Swindon.

By the time we moved to Somerset in 2003, Rosemary needed a knee replacement, after which she didn’t seem to fit the Raleigh so well. The ‘new’ knee functions well, but has a limited angle of bend. To be comfortable while riding, the saddle had to be raised. Being short (5ft 2in), Rosemary then encountered problems getting on and off the bike. A friend suggested fitting short pedal cranks and, being a skilled welder, he cut and rewelded an old pair.

The experiment worked and led to the purchase of new short cranks (145mm) from SJS Cycles. Chainrings were also changed from 48-38-28 to 46-34-24 to compensate for the reduced pedal leverage, and in this form we had a number of cycle touring holidays. However, there were a few mishaps along the way, usually while Rosemary was getting on or off the bike, or on uneven ground. It became clear to me that the saddle and, as a consequence, the bottom bracket had to be lower.

I was encouraged in this thinking by letters and technical enquiries in Cycle indicating that she was not the only person of short stature looking for a comfortable, safe touring bike. A trawl of the websites for specialist frame builders led me to email three, outlining our problem. One replied: Jake Rusby of Rusby Cycles in South London.

Jake insisted that Rosemary should be professionally measured, and so we found ourselves spending two hours with the helpful staff at Bike Science in Bristol. They set up their measuring equipment using Rosemary’s short pedal cranks, saddle and handlebar, then watched and filmed her riding. It was obvious that, despite short cranks, her limited knee movement was causing her hips to rock on the saddle each turn of the pedals. Various adjustments were made until a comfortable riding position was achieved. Then the dimensions were emailed to Jake Rusby, which he followed up with a phone conversation.

A few days later, a suggested design arrived from Jake. We were immediately impressed with its elegant simplicity. We visited his workshop, taking some of the components from the Raleigh to be measured and checked. It was also a chance to see the range and quality of Jake’s work. On the strength of that visit, we placed an order for the frame.

A few weeks passed and then we began to receive photos of the frame under construction: first the fork, then the part-assembled frame, and finally the finished frame in the spray booth.

Eventually, the finished frame arrived and assembly commenced. Mavic wheels and Shimano Deore V-brakes were reused from the old bike. A new Shimano 8-speed Alfine hub was matched to the SJS cranks using the 34-tooth middle chainring and a 22-tooth sprocket. The inner chainring was discarded and the outer one was turned into a chainguard by filing off the teeth. A new handlebar was fitted, with Ergon GR2 hand grips for comfort when touring.

At the time of writing, the bike has covered 150 miles and is proving to be a great improvement on its predecessor. The low step-through height and lowered saddle make mounting and dismounting much easier and safer. The lightweight frame gives a smooth ride on uneven Somerset lanes, and Rosemary’s confidence is improving rapidly. Add the bonus of a hand-crafted, elegant design, and she has a bike to enjoy and be proud of. 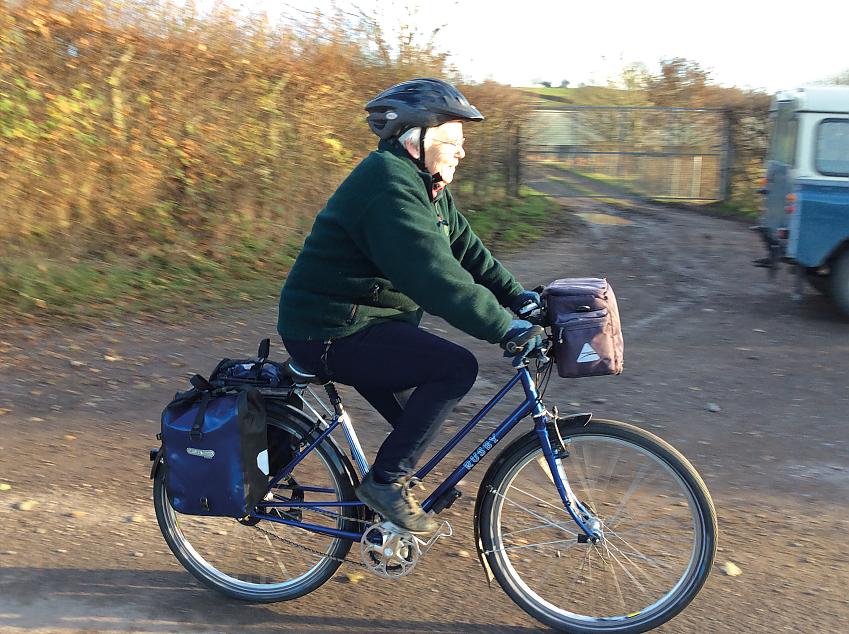 Above: Now Rosemary can pedal happily without being too high up

Cycle Magazine, October / November 2017 View
You too can champion cycling in the UK
Give your support today to help Cycling UK’s charitable work tomorrow. We double every pound you give through other sources to help change lives and communities through cycling.
Volunteer now
Cycling UK continues to support the UK to cycle
This remains true during this difficult period with the ongoing threat of coronavirus Covid-19
Read our latest advice on cycling
Join Cycling UK to help us change lives and communities through cycling
Membership gives you peace of mind insurance, discounts in cycle shops, rides & routes
Join now