Ned Boulting with one of his Bromptons

If you were following the Tour de France last year, you may have seen the mock heroic video that Ned Boulting posted on Twitter of himself and David Millar riding the cobbles of Stage 9 on their Bromptons.

The video is a bit of fun but the bikes weren’t props; they’re part of Boulting and Milllar’s Tour de France luggage. "We’ve used them the last three years," Ned said. "They are beyond useful; they are indispensable. Every day, time permitting, we’ll ride the final climb, or the last 20k of the course, which is good reconnaissance. But they also allow us to zoom past traffic jams and get free of the circus at the end of the day, with a bit of strategic parking. I can’t imagine not having them. They’re like an extension of ourselves."

The two ITV4 presenters aren’t the only ones who manage to fit some cycling into their schedule. "Rolf Sørensen and Christian Vande Velde both ride every day, as does Robbie McEwen," Ned said. "But those guys still think they’re racers. Me and David just potter about – much to everyone’s hilarity." Racers don’t really ‘get’ Bromptons. By and large, they’re not transport cyclists.

"I think racers, when they are racing, only understand the one thing," Ned said. "And when they stop, it takes them about five years to detoxify their relationship with the bike. Some never manage the transition. For them, it’s work – and nasty work at that. For the rest of us, it’s about getting from A to B. We’re better than them – more mature."

I imagined that Ned had just the one Brompton. I was wrong. "You’re going to hate me, but I’ve got three. I am a kind of Brompton guinea pig for David Millar’s Chapter Three brand. They send us both their prototypes for use during the Tour de France. Then they forget to ask for them back, which is nice. (Don’t tell them)." While most Bromptons are used for riding to and from stations, Ned’s journeys are a mix of urban streets and Tour de France finishes. "I use my Brompton to commute round London when I am not in a rush," he said. "It encourages bimbling. Add that to the obvious flexibility of jumping on buses or Tubes if it starts raining and its advantages are staring you in the face. But I’ve also ridden up Andorra’s Arcalis, Mont Ventoux, La Rosière, Finhaut-Emosson, La Planche des Belles Filles, Alpe d’Huez, Col de Peyresourde, Col de Portet d’Aspet, Porte de Balès, Col du Portet. And on the Champs Elysées."

It’s not just the ease of transporting it that Ned appreciates about his Brompton. "I like the narrow handlebars for nipping through traffic, and the low frame for hopping on and off," he said. "I love the little wheels. They make me laugh." Like the vast majority of Brompton owners, Ned is a normal-clothes cyclist – something he thinks is key to cycling’s acceptance. "I think the image of people riding in hi-viz, bristling with lights and Go-Pros, wearing helmets and goggles, clipped in, is deeply offputting to people who have stopped cycling. I understand that people want to feel safe. But I think sometimes the measures people take are unnecessary and counterproductive. I feel safest when I am surrounded by people pottering about, at no great speed, wearing normal clothes, going about a normal activity. Oh, hang on, that’s Holland, isn’t it?" 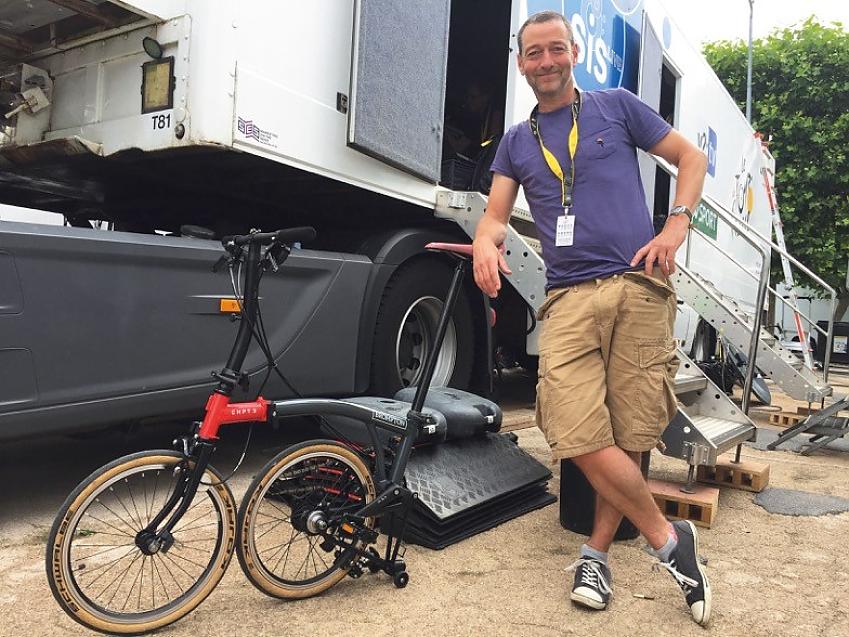 Ned Boulting with one of his Bromptons

Bromptons up the Alps View