Dara Godivala and his daughter on the second day of the 2014 Tour de France, which started in York that year

Training children with special educational needs and disabilities to ride a bike led Cycling UK member Dara Godivala to develop a method that he believes will work for anyone. He spoke to Cycling UK's digital officer, Rebecca Armstrong

Cycling UK member Dara Godivala is a lifelong cyclist. He learned to ride as an infant and cycled everywhere throughout his childhood in Bristol – right up till he learned to drive. He now lives in Watford.

When I chat to him his enthusiasm for cycling is evident as, with a chuckle, he proudly shows off his ‘WARNING – may start talking about cycling’ T-shirt. When it comes to bikes, he says he could “talk the hind legs off a whole herd of donkeys”. Of his Cycling UK membership he says: “Well, I’m interested in everything cycling, so when the suggestion came up, I didn’t even think about it!”

Retired now, Dara is a trained riding instructor and a bike mechanic. It was being retired and having more time on his hands that led him to teaching children with dyspraxia and other special educational needs and disabilities. From this, he developed a unique method of training that he believes is suitable to teach anyone how to ride a bike. He mostly teaches children, although he has also trained adults – including “a 20-stone rugby player who was like a jelly on the bike out of fear!”

“I’ve been a member of Spokes in Watford for many years,” he says. “I attended a presentation at the AGM by someone setting up a company to provide cycle training to schools. He was looking for instructors and as I’d retired I thought it would be worth a try. I trained as an instructor and taught with the team of instructors at various schools and adult sessions.” 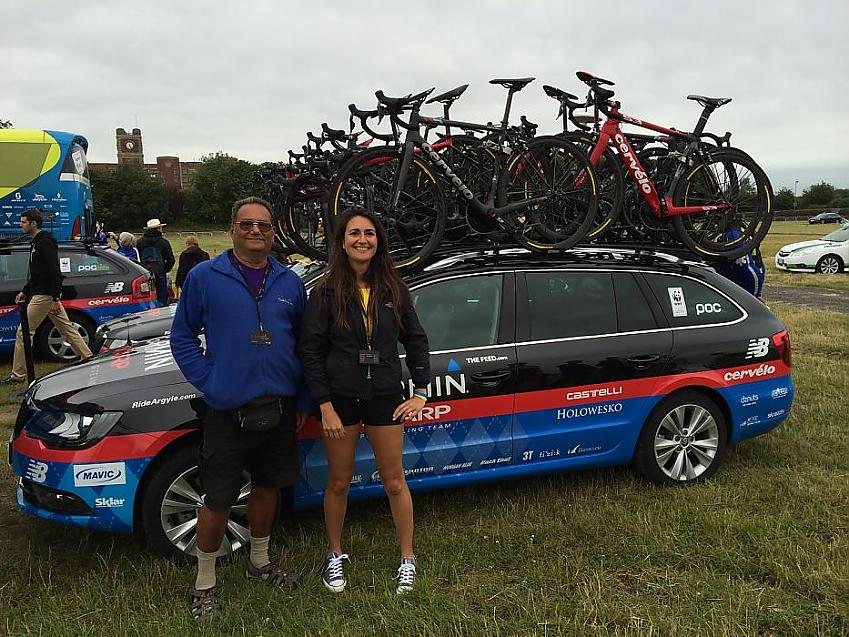 Dara Godivala and his daughter on the second day of the 2014 Tour de France, which started in York that year

It was during this time that Dara began to encounter children who simply couldn’t pick up the skill of riding a bike. For various reasons, these children weren’t suited to group teaching. They included kids with dyspraxia, autism and deafness, as well as those who had been learning to ride using stabilisers and found they couldn’t balance without them.

Dara isn’t a fan of stabilisers: “I would like nobody to fit stabilisers except in the most exceptional circumstances because they actually delay learning to ride,” he says.

It wasn’t only riding a bike that’s affected in kids with these conditions – the children’s difficulties meant they weren’t taking part in any sporting activity, leading to a downward spiral of physical and mental health issues. “They can’t take part in team games and sports because they can’t catch or kick a ball,” Dara explains. “So they sit on the edge of the playground and aren’t chosen for sports teams. They get muscle wastage. They get depression.”

However, the scheme was financed by the local council, which had extra funding for training children with special educational needs and disabilities who took longer to learn, giving the company an incentive to take on these kids. Dara began teaching them and was quickly successful. Word spread: “These children who did learn to ride were taken by their mothers to their clinics, where they talked to the mothers of other children with special needs, telling them that their child had learnt to ride. They all wanted their children to ride as well.”

By this time, though, the council’s funding had run out. So parents started to approach Dara privately to ask if he would teach their children to ride – and offered payment. “So that’s how I started off specialising in teaching children with special needs,” he explains.

Anybody who wants to can learn to ride a bike

The most severe condition he’s dealt with is global developmental delay, a very rare condition in which a child will present a delay in multiple developmental areas, including speech and language, social, cognition, play and motor skills. “The little boy who had global delay took more than eight weeks, with training every day. His mother would take him down to the park and do what we had practised every single day.”

"The problem lies not with the child but rather with the traditional training method. I still remember this well – as will many people reading this, I’m sure. It involves an adult holding onto child and bike, pushing them along while the child tries to balance, steer and pedal all at the same time. The adult then releases both child and bike and hopes the child will succeed. Many do, but for the ones that don’t, it’s a huge blow to their confidence."

Dara’s method concentrates on enabling the trainee to develop confidence in their own ability and attribute their progress to their own efforts. At no point does it require contact with either trainee or bike – an unexpected benefit of this being that he was able to continue teaching throughout lockdown. This lack of contact is important, Dara says, because: “If they think ‘I can only do this because he’s holding me’, it’s not as enabling as if they think ‘I’ve done it all on my own’.”

Instead of trying to get the trainee to do everything at once, Dara broke his training down into 36 separate steps, each step builds on the previous one and all can be taught to parents to facilitate practice at home. He will spend however long it takes on each step to ensure the trainee is fully confident until moving on to the next one. “Patience and practice are the two watch words,” he says.

“People say to me, how do you have so much patience? I say to them if being irritable and shouting at them got a better result, I’d be the most irritable, loudmouth, shouting instructor in the world, but it doesn’t. They respond best to encouragement, constant feedback, constant praise.” 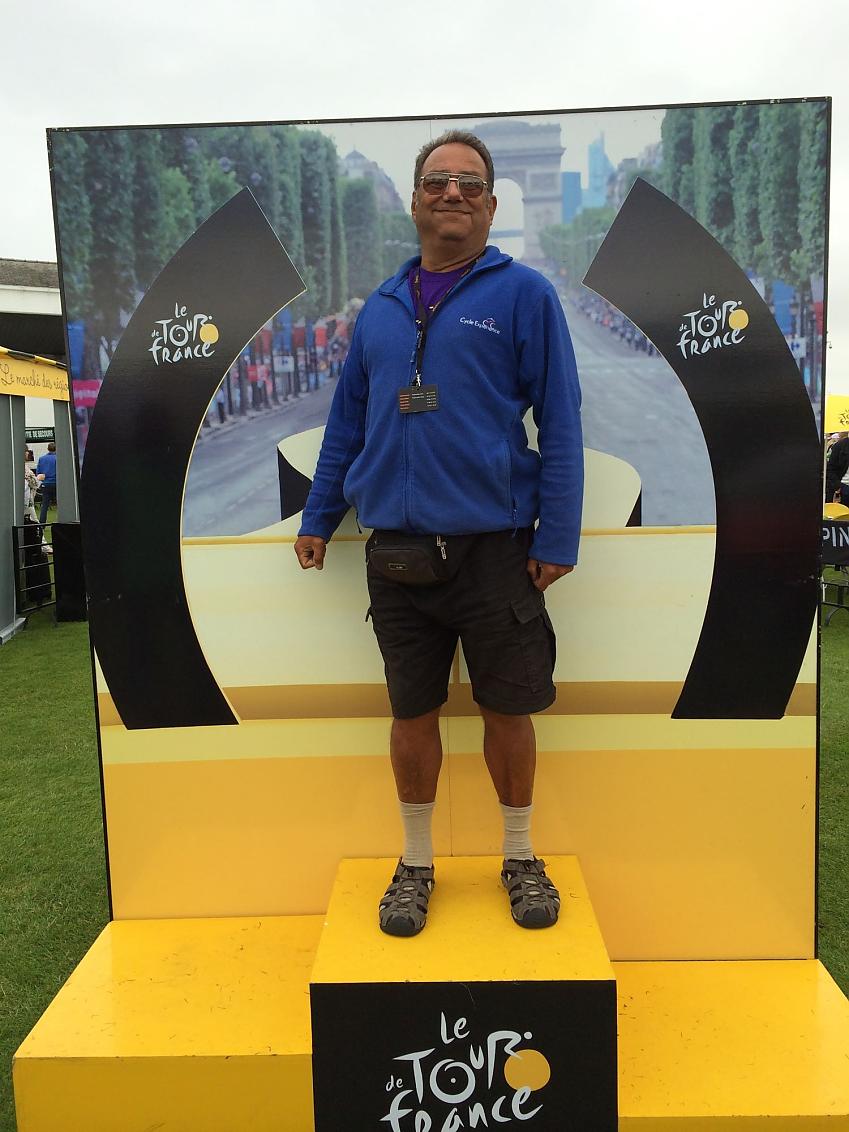 Dara on the finish line in Sheffield of the first stage of the 2014 Tour de France, which that year started in York

This 36-step method can be summed up as: balance, glide, pedal. “You can’t do any of the other things,” Dara says, “until you've done these three things: learning to balance, learning to glide and learning to put your feet on the pedals. And suddenly you see a big smile across their face: ‘I’m riding!’”

The change in the children is far reaching. That downward spiral that Dara mentioned earlier “becomes an upward confidence spiral” as the child “becomes fitter, more confident, their peers suddenly find that he or she can do what they can do and sometimes better, and the child becomes part of the group again.”

Dara’s own cycling has been put on hold by coronavirus. Over 70 and diabetic, he’s been isolating during the various lockdowns. But he is looking forward to a holiday. “We’re going away in May for the first time in three years. The holiday was booked three years ago and deferred each year because of coronavirus.”

Organised by The French Federation of Cycling Tourism, “they go to a town and do different routes each day. The routes are varied according to ability. Each day there will be a P1, P2, P3, P4 and P5. P1 will do about 30km and P2 will do about 50km. The P5s will do 100 or 120km and go up mountains. We only do the P1s!”

The whole town will be over-run by cyclists: “The last one we went to had 12,000 of us cycling altogether. Of course, France is brilliant for cyclists. They have much more respect for cyclists there.”

These days he’s invested in an e-cycle. He and his wife live in a cul-de-sac, he explains, at the curve of the ‘U’ shape, with a hill out both ways, and his wife has arthritis. “She could no longer go up the hills,” he says. “Walking was painful and cycling was impossible, so we got her an electric bike. That caused a major problem: I couldn’t keep up with her!”

“I got her on the bike, and said try it. She was going up and down the road, and I said just take it up round the corner, go up the hill and come back down again. She disappeared! I went around the corner she was nowhere in sight. Half an hour later she appears around the other side – she’s been for miles because she’s enjoying it so much.

“There was no way I could keep up with her. So I had to get myself one!”

What is Bikeability? View