Using cycling on off-road trails in the New Forest to help people who have struggled with substance misuse and homelessness to find new paths back into society, a life-changing project has been finding some new paths of its own

Saints4Sport, based in Southampton, has been supported by Cycling UK to run rides in and around the city, as its staff, volunteers and service users have adapted to the challenges of the Covid-19 pandemic.

Ashley Christopher, who leads the project, says levels of anxiety among the service users he works with have been extremely high during lockdown, with many worried about stepping outside their front door.

The group is now cycling more around the city, allowing users to get to know more routes around their neighbourhoods but also to cycle more often and further as well.

Like many other local authorities, Southampton City Council has installed a number of temporary 'pop-up' cycle lanes across the city to encourage active travel while enabling social distancing to be maintained. Among the cycle lanes the group have ridden are those in Hill Lane, Portswood Road, The Avenue and Dale Road.

Ashley says: “We used to load a minibus up with bikes and go out into the New Forest. We would ride for about an hour and a half to two hours and cover about 16km.”

Ashley completed his ride leader training through Cycling UK a couple of years ago and completed Bikeability instructor training just before lockdown. Once restrictions were lifted, it was clear the model would have to change and so the participants now meet at the garage where S4S stores its bikes – which have all been sanitised beforehand – and then ride out from there.

He explains: “We use paths and road riding, and that was quite challenging in the beginning, but people have an innate level of self-preservation and look after themselves and each other. On the forest rides we used to do, I would let some of the clients go ahead of me and tell them if they had lots of energy to burn off to ride to the next crossroads and wait for everyone else. We have some service users who are good at getting involved and helping others. I call them the rising stars, and we give them a bit of responsibility to look after some of the newer or less confident cyclists and they respond well to being given that little bit of responsibility.”

The group now meets twice a week whereas the trail rides were just weekly. There is a Tuesday ride which is a little gentler and tends to be for those with the most anxiety issues and a longer Thursday ride but people are welcome to move between the two groups, depending on available space.

“When we started the rides again I thought we were going to be swamped with people coming along but a lot of our service users were anxious and didn’t want to come out. But we aim to reassure people, and cycling is one of the safest activities you can do,” Ashley says. “Cycling by its nature allows you to keep a distance from each other more than most other sports and activities.

“I think people get more out of cycling. If you go to the gym, you are just stuck on a treadmill or whatever, whereas cycling you get out and go on a journey. You can stop and look at the river, or watch a horse or a fox in the fields – you’ve got more freedom to experience things.”

Ashley says he liked to maintain a little spontaneity when it came to the ride programme. “I have usually got a good idea of the route in my head, but we can change it a little bit so I might say ‘ok, everyone is doing really well today, so we are going to add a little diversion in.’

S4S is a partnership between the Society of St James (SSJ) and Saints Foundation – the charitable part of Southampton Football Club. Each part sources its own funding, with SSJ benefiting from the National Lottery Community Fund.

The project works with adults who have substance dependency issues, have been homeless, experienced poor mental health or been involved with the criminal justice systems. As well as sports and activities, S4S also offers education and employment support activities.

According to Ashley, around three quarters of the people who started the sessions in summer are continuing to ride each week and sessions will carry on throughout the autumn and winter.

He says: “If someone doesn’t come for a week or two, that’s fine, it is important the group is always welcoming, I wouldn’t ask them what the reason was they couldn’t come; sometimes they might voluntarily tell me. It all depends on the type of relationship we have with that person.”

He said keeping up communications even when meeting face-to-face wasn’t possible was key to building those relationships of trust. “I kept in touch with our service users by phone in the first part of lockdown and for lot of them their anxiety levels were sky high. Many of the people we support have a history of mental health issues and they found the isolation particularly hard. That’s why we started up the group rides as soon as we could and we had all the Covid-19 safety policies in place,” he said. 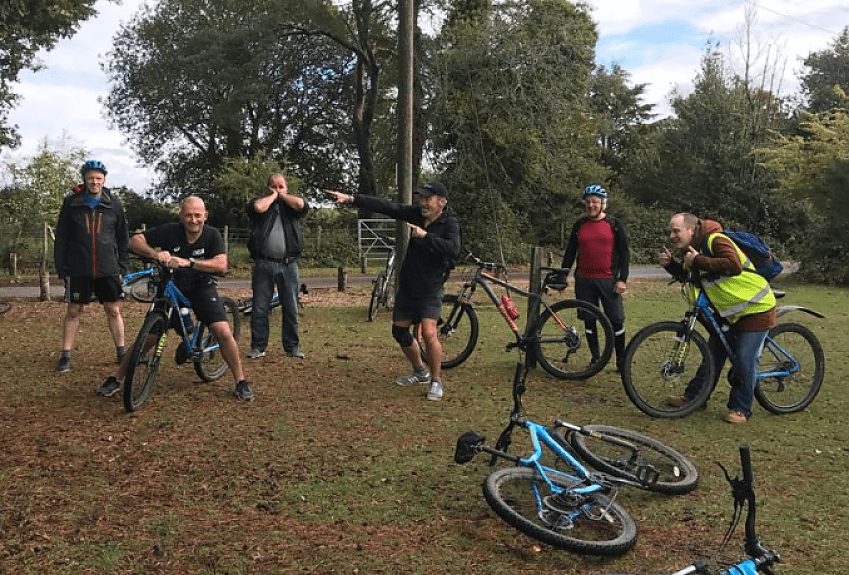 Among those who have been helped is Winston, who has previously experienced suicidal thoughts. “Coming to the Tuesday and Thursday group has been instrumental in keeping my mental health well,” he says.  “Having the rides back, getting outside and socialising has greatly improved my mental wellbeing. When I’ve missed the session, I’ve noticed a significant dip in my mood and well being”

Another success story from the project is Dan, who has returned to mountain biking, a hobby which he used to love, thanks to S4S. Dan has moved on from a low point 18 months ago when he was arrested, to now being in full-time employment and becoming a qualified cycling instructor.

After developing mental health issues in May 2019, and seeking help for his alcohol and drug issues, Dan was referred to S4S.

"They invited me to attend the biking activity, I was very anxious to go along but when I arrived I was greeted by staff and was made to feel at ease," he says.

“Cycling helped me regain my confidence, and self-esteem, which enabled me to start volunteering my time to the running of the S4S sessions. With my life getting back on track I was invited to move back into my parental family home.”

S4S then sent Dan on an outdoor first aid course and a level 2 Instructing Cycle Training Delivery, and he also received a helmet, lock, lights and clothing as part of an employment support grant.

A number of online courses and help with CV-writing and job applications followed and Dan landed a full-time job, where he has recently been promoted to become a supervisor.

Cycling helped me regain my confidence, and self-esteem, which enabled me to start volunteering my time to the running of the sessions

Dan says he is thankful to have been given the chance to attend the cycling sessions. “It introduced me to other people who have been suffering with similar issues and gave me someone to talk to in confidence whether this be a member of staff or other service user. It gives me something to look forward to every week.”

Dan is not the only one; the sessions were “a right laugh”, Ashley says. “it is a highlight of the week for me and the guys and girls who come. Everyone is valued as a human being. Some of these people have done some awful things in the past, but they are always treated as a human being.”

It is a great job, when I am out with my mates and they ask me ‘what have you done this week’ and I say ‘I went out cycling today’ they just look at me and ask ‘and you get paid for it!!’

If you have been affected by any of the issues raised in this article, the following resources may be helpful to you. Samaritans provides confidential support for people experiencing feelings of distress or despair and mental health charity Mind has tips and advice for anyone to support them to take care of their wellbeing during the current pandemic.

A guide to cycling in the New Forest View

From alcoholism to ride leader: how cycling helped break addiction View
Cycling UK continues to support the UK to cycle
This remains true during this difficult period with the ongoing threat of coronavirus Covid-19
Read our latest advice on cycling