Read an excerpt of Revolutions: How Women Changed The World On Two Wheels, Hannah Ross' book celebrating women from history as we celebrate the Women's Festival of Cycling

It was Starley, the same visionary who invented the original Safety bicycle, who had the foresight to design a bike that would specifically appeal to women. Released in 1887, the ‘Psycho Ladies’ Safety’ featured a frame with a sloping top bar – a step-through – so that that the rider didn’t have to straddle a crossbar in cumbersome long skirts, and a chain guard to prevent the layers of fabric getting mangled and causing an accident.*

One year later the members of Harriette H. Mills’ women’s cycling club placed an order, even though it meant shipping the Psycho all the way from the UK to their home town, Washington DC. Harriette owned a US-produced ‘Ladies’ Dart’ bicycle, but the company couldn’t produce them fast enough to meet demand. Another company called their ladies’ model ‘The Witch’ – a seemingly counterintuitive piece of marketing strategy, considering the term had yet to be reclaimed by feminism. Despite the dubious choice of names, it’s clear that on both sides of the Atlantic manufacturers were beginning to realise they could sell more bikes if they were specifically adapted to women.

My own family history hasn’t revealed whether, while Samuel Moss was winning racing medals, his wife, my great-grandmother, had also caught the cycling bug. But statistics show that by the middle of the 1890s women’s bikes accounted for one-third of the market in the UK and North America. This would have seemed an impossibility a decade before when the high-wheel craze was in full swing.

The popularity of women’s bicycles was given a boost by the enthusiasm with which certain members of the upper echelons of society embraced the sport. The Duchess of Somerset, for instance, often hosted fifty or so of her friends for breakfast in Battersea Park’s lake house before pedalling circuits of the park together

The popularity of women’s bicycles was given a boost by the enthusiasm with which certain members of the upper echelons of society embraced the sport. The Duchess of Somerset, for instance, often hosted fifty or so of her friends for breakfast in Battersea Park’s lake house before pedalling circuits of the park together. They also enjoyed night rides through the city, with Chinese lanterns lighting their way, before dismounting for a grand supper. Bicycles could be spotted gracing the marble halls of the aristocracy across London and each morning they would be carefully placed in carriages to be driven to the local park along with their lady owners. Boys in uniform waited on the steps of grand houses ready to polish the cherished bike on its return.

For society cyclists, it wasn’t just about being seen on a bicycle, it was also about whether you had the latest model and the clothes you wore to ride it. Daisy Greville, Countess of Warwick (mistress of the Prince of Wales, the future King Edward VII), was described as having caught the ‘rabid disease commonly known as cyclomania’. Her devotion to the pursuit led to her becoming the inspiration for the music hall staple ‘Daisy Bell’, who according to the observer will ‘look sweet upon the seat of a bicycle built for two’. The press fixated on the countess’s attire, eagerly reporting the changing colours of her mount and coordinating outfits to match the seasons – moss-green for autumn, all-white for summer, brown and gold for spring – with tailors poised to copy whatever she wore.

The cycling press at the time was filled with interviews with these society ladies – as well as some famous actresses – who were so taken with their new hobby that they had incorporated it into many of their favourite pastimes. Guests to weekend parties at the best country houses were urged to bring their bicycle so they could go on picnic rides and partake in gymkhana-style games and fancy-dress bicycle parades. Some even abandoned their usual equine mount for two wheels in order to follow the local foxhunt.

The ladies of New York society were equally enthusiastic. In 1894, Cycling magazine reported: ‘as early as five o’clock in the morning, a large number of ladies are seen riding with their maids or footmen upon Upper Fifth Avenue and the Boulevard’. Some of them might have joined the rarefied Michaux Club based on upper Broadway, which catered to the likes of the city’s elite ‘Four Hundred’ group, led by the doyenne of the social scene – Caroline Astor – with Rockefellers and Roosevelts in their number. In 1896, Harper’s magazine reported that the club comprised ‘many of the fashionable folk of the city, and quite as many women as men are enrolled’. With an upper limit of 250 members, the Michaux quickly established a long waiting list. Their premises boasted a library, a lounge for taking high tea, and an indoor school for the winter months, where members cycled to music and performed synchronised routines - like a nineteenth-century equivalent of today’s Peloton or Soul-Cycle spin classes.

A reporter from Munsey’s Magazine was spellbound by the sight, declaring that ‘the intricate figures performed by the cyclists, as they follow their leader around the spacious hall, to the music of the band, make one of the prettiest sights in all Gotham’. In spring and summer, group rides were organised to scenic destinations like Riverside Drive, where they would stop for lunch. The city planners responded to the craze by creating a bicycle path that went all the way from Prospect Park to the resort town of Coney Island on the Atlantic. It was so popular that within a month it had to be repaired from overuse and widened to accommodate the high number of users.

In Italy, Queen Margherita of Savoy was a convert, with gossip columns reporting that she rode a bicycle with solid gold wheels. Queen Amélie of Portugal was encouraged to take up cycling by her husband, who worried she was spending too much time reading books about physics. She embraced the pastime enthusiastically, though I hope she still found time to pursue her interest in science.

The impact of the aristocracy’s fervour for cycling could be felt as far away as China, where Shanghai’s Sing-song girls (the Chinese equivalent of the geisha), who were always first to adopt the latest fashions, could be seen cycling around the city’s parks.

*Admittedly ‘Psycho’ seems an odd choice of name if you want to attract a new sector to your market, but it didn’t have quite the same connotations as it does now, largely thanks to Alfred Hitchcock’s film of the same name.

More information on Revolutions: How Women Changed The World On Two Wheels

You can buy the Hardback version on Waterstone's website. 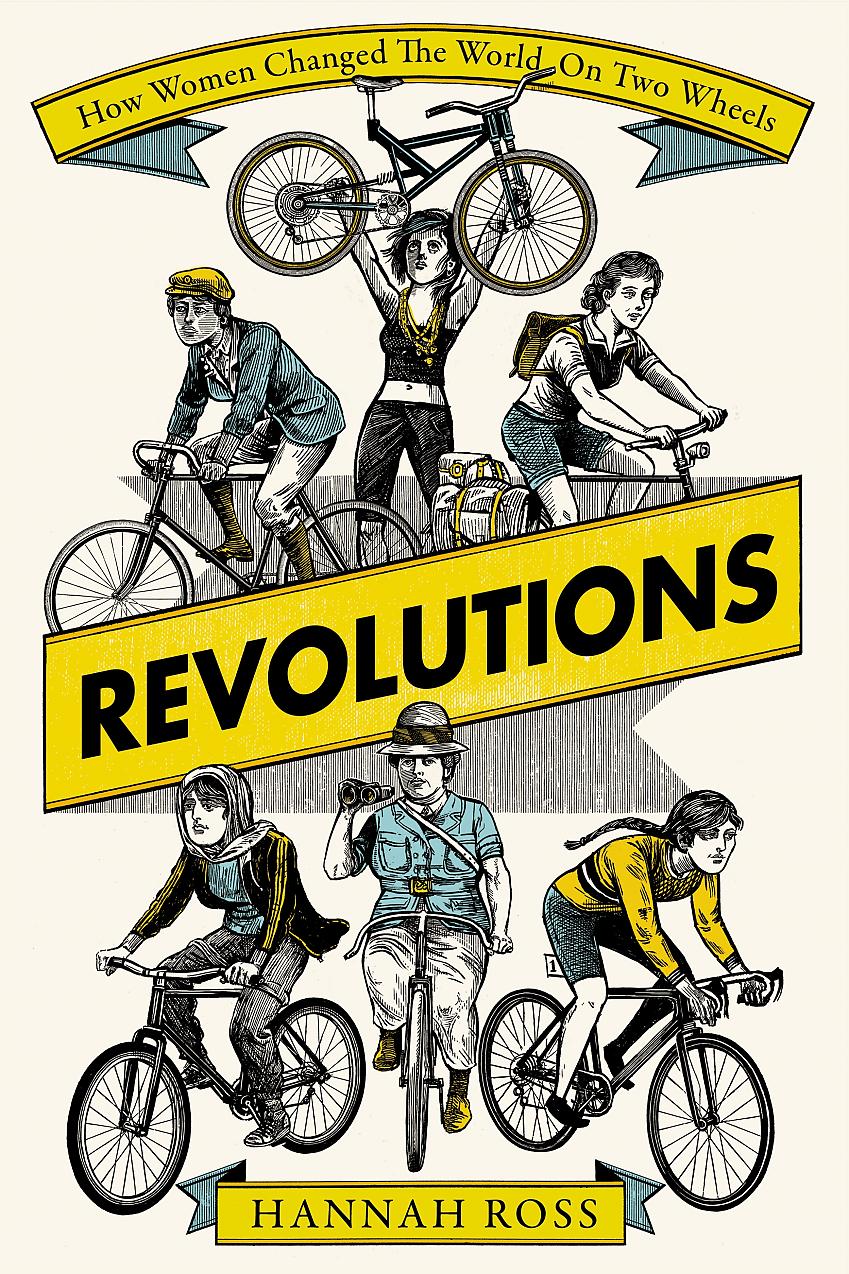