School's out for summer in Scotland and what better way to celebrate than with a family adventure by bike? Markus Stitz designed the Kitty Swanson's Family Gravel Bike Gallivant to help families explore central Scotland

Generations ago, Kitty Swanson operated a ferry crossing over the River Ericht for many years in the late 1800s and lived in a cottage nearby. Whilst there was a ford that allowed vehicles to cross at this point, the pedestrian ferry was important as Bendochy Kirk and School served a huge parish on both sides of the river. I couldn’t find any information about when the original bridge named after Kitty was built, but after years of decline it was replaced in 2015 with a new structure that spans the river.

Part of the East Perthshire Paths Network, the surroundings of Kitty Swanson's Bridge are typical for the mostly flat southern part of the Cateran Ecomuseum. The River Isla, a tributary of the mighty River Tay, the largest river in the UK measured by discharge, runs for 46 miles (74 km) through the Kirkton of Glenisla and Strathmore. It marks part of the eastern and southern boundary of the ‘museum without walls’. The River Ericht, which Kitty Swanson’s Bridge spans, forms at the confluence of the rivers Blackwater and Ardle at Bridge of Cally, and runs for around 10 miles (16 km) on the western boundary of the Cateran Ecomuseum before meeting the River Isla about a mile (1.6 km) from the bridge.

Both rivers have interesting stories attached to them. Legendary local fisherman Bill Abernethy, whose portrait is displayed in the Scottish National Portrait Gallery in Edinburgh, was of the last generation to legally collect the pearls which form inside fresh-water mussels. The Isla was one of the rivers he could be seen on with his coracle, lying on his stomach in this small traditional boat, using a bucket with a glass bottom to look for the mussels underwater. 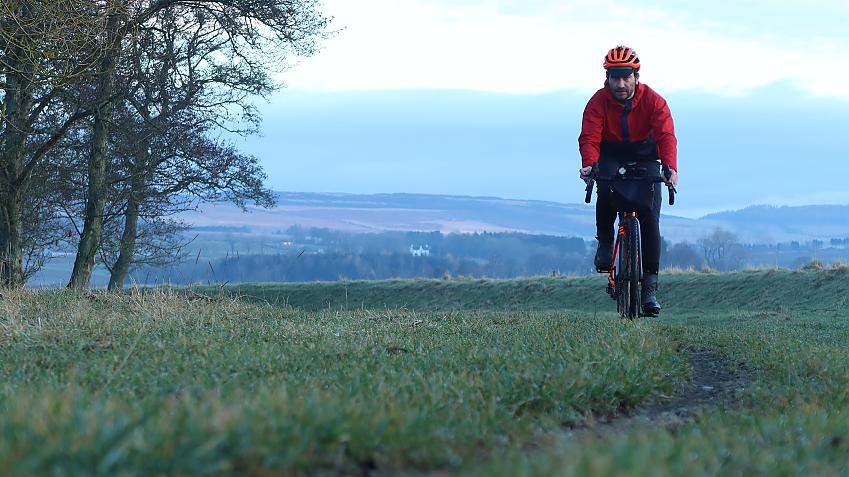 The water of the River Ericht once powered one of the most thriving and innovative centres in the history of Tayside's textile industry. During the Industrial Revolution, Blairgowrie & Rattray was a bustling centre of the textile industry, first spinning flax, then jute and latterly rayon. Between the years 1801 and 1881, about the same time when Kitty Swanson was operating her small ferry over the river further downstream, the combined population of Blairgowrie rose from less than a thousand, to over seven thousand people.

The jute industry began to decline at the start of the 20th Century when the Ericht mills became progressively uneconomic and were heading for closure. Despite minor booms during the two world wars and experiments such as spinning artificial fibres, the last working mills on the Ericht were forced to shut down in 1979, and only a few of them physically remain.

With the decline of the mills, another industry began to dominate the small Perthshire town, in which my route for today begins. The Kitty Swanson’s Family Gravel Bike Gallivant is a mostly flat, beginner and family-friendly gravel route I designed as part of the Travel for All Our Tomorrows Project in the Cateran Ecomuseum.

With the decline of the mills, the Scottish raspberry industry was born in Blairgowrie. Today the town is known as the berry capital of the UK, earning it the nickname 'Berry Town'. My ride takes me right through the heart of Scotland’s berry country on a mixture of quiet roads, cycle paths and tracks. 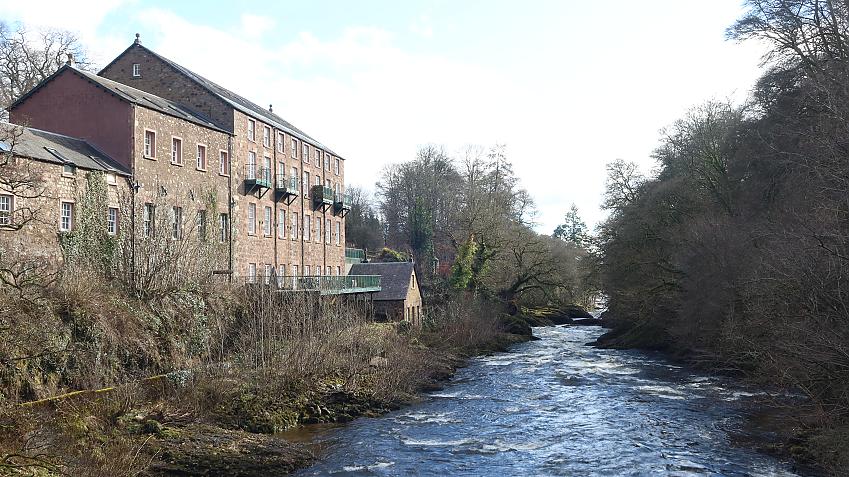 Where once the fruit was picked by local people, in the years that passed the growing scale of the berry season drew increasing numbers of fruit pickers to Blairgowrie, among them families keen to earn money picking fruit while enjoying the countryside and Scotland’s travelling people. Today raspberries, strawberries, blueberries, redcurrants, aronia and gooseberries are produced using polytunnels to help protect the delicate berries, and the beginning and end of my ride takes me on quiet roads through some of the fruit farms that dominate some the countryside in Strathmore these days.

My cycle starts at Wellmeadow in the heart of Blairgowrie and follows Welton Road out of town. Before my ride, I enjoyed a nice coffee and cake - sufficient to get me over the next nine miles (14.7 km). If you need extra supplies for your ride, a large supermarket to your left has replaced the former railway station, which served the town for 100 years until 1955 on the Scottish Midland Junction Railway.

This railway also stopped at nearby Stormont Loch, which for a period of 35 years had a dedicated halt on the line, as it was a well-known destination for curling matches in winter. Also known as Loch Bog it lies off my route for today, but the wintering wildfowl and geese, as well as small birds, including sedge and willow warblers, long-tailed tit and goldcrest, can also be admired at Monk Myre, which is the first point of interest along my route, and a great rest stop too. 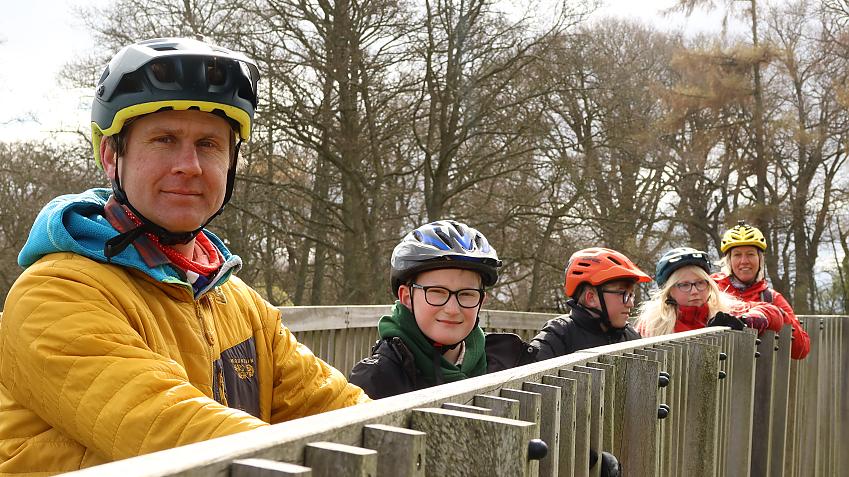 A few days before I interviewed Bob Ellis, one of the co-founders of the Cateran Ecomuseum and a well-known man in this part of Scotland: ‘I would want families to come here. Bring their children, so in the space of time those children will bring their own children with them.’

Apart from the steep sided mountains in the north of the Ecomuseum, this route is a great way to discover what the Cateran Ecomuseum has to offer for all generations, as it only climbs a total of 225 feet (70 m) and is suitable for almost all types of bikes (except road bikes, cargo bikes and hand bikes, as a few small steps need to be negotiated).

The route also provides me with the opportunity to see the traces of beavers, re-introduced to Scotland in the early 21st Century and now a protected species. Beavers are nocturnal animals and can mostly only be spotted just before sunset and sunrise, but as I take a rest at Kitty Swanson’s Bridge, I discover tree stumps chewed by the animals. 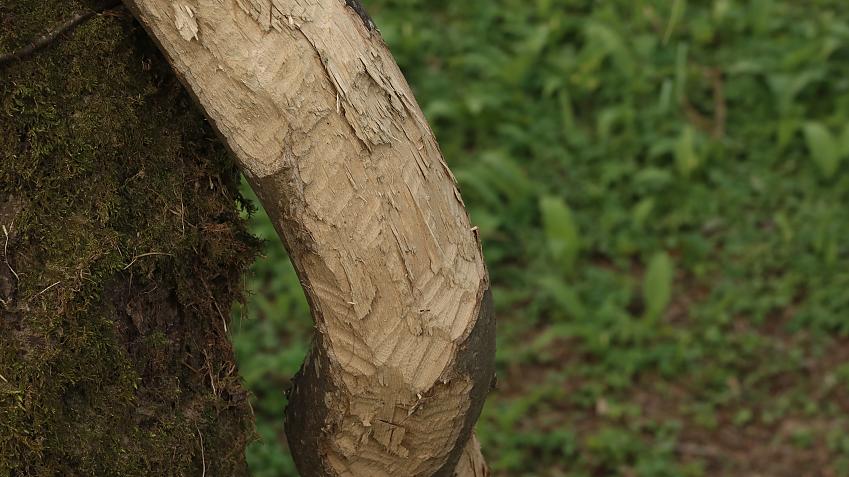 A midnight snack for a Beaver?

The next section of the route is pure joy on my gravel bike. I cruise a short while along the banks of the Ericht, and then continue on a nice wide gravel track. After a short road section I join a newly-built gravel path for walkers, cyclists and horse riders between Blacklaw and Lochlands, which forms part of the wider Strathmore Cycling Network, and finish my ride with a well-earned ice cream. Admiring the Salmon sculpture by David F. Wilson and ending my day with a stroll up the river to Cargill’s Leap to pick some wild garlic, I now have to choose a location on the route to film a scene for my film Built to Last, which is also part of the project in the Cateran Ecomuseum.

Kitty Swanson’s Bridge is my choice of the film and a few days later I return with Stella, Angus, Nicky and Eliot, who all live in nearby Alyth and love this place to ride their bikes. Their friend Charlie, who lives on a neighbouring farm and often joins them for bikepacking trips, is with us too. While an unseasonably strong and cold wind makes for tricky cycling and filming conditions this time, everyone smiles. In fact, Charlie’s smile couldn’t be any bigger while I make him repeatedly ride over the impressive bridge to get the perfect drone shot and some close ups.

This area has seen a lot of change over the last generations. Industries came and went. Humans shaped the landscape, but it’s natural beauty thankfully has remained. One of the Cateran Ecomuseum’s aims is to encourage people to travel with zero emissions, locals and visitors alike, and empowers them to take an active role in preserving the objects, sites and cultural practices they value. The museum encourages different generations to simply enjoy their time outside in nature. Recommended by Bob, now in his seventies, and appreciated by me, Nicky and Eliot, all in our forties, and the children, in their teens, the route was a truly enjoyable experience for all of us. And with the work the Cateran Ecomuseum is doing, it will hopefully be the same for generations to come. 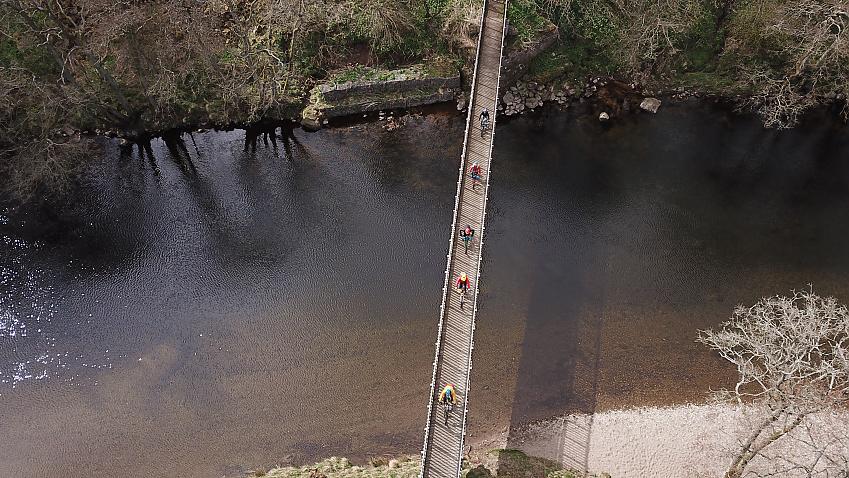 Conditions: This route is good to ride all year round. Kitty Swanson’s Bridge and the section near the banks of the River Ericht are in an area that can get flooded after high rainfall.

Maps/guides: I used Komoot for planning the ride, OS Landranger 53 covers the area, and a custom Cateran Ecomuseum map is in the planning too.

I’m glad I had…Extra time to spend at Kitty Swanson’s Bridge the first time I rode the route. It was early in the morning, with the River Ericht reflecting the sunshine in the most beautiful colours I have seen on a river so far. The bridge and the surroundings are sheltered nicely from the wind most of the time, so they are perfect to spend time to enjoy the area, and look for traces of beaver activity too.

Next time I would…Take a picnic and enjoy the beautiful surroundings of either Kitty Swanson’s Bridge or Monk Myre. The loch is a designated Site of Special Scientific Interest (SSSI) and also forms part of a Special Area of Conservation. It’s a fantastic place to watch birds.

Do it yourself: The Kitty Swanson's Family Gravel Bike Gallivant

Unfortunately you can no longer travel to Blairgowrie by train, and local buses do not accept bikes. The closest train station is 12.3 miles (19.8 km) away in Dunkeld, bikes need to be reserved in advance. The Ember electric bus service operates from Edinburgh to Dundee, the closest stop to Blairgowrie is Inchture, which is 14.6 miles (23.5 km) away. Bikes can be taken on this bus service. Advance bookings are cheaper, and can be cancelled any time.

Find out more information about the Cateran Ecomuseum and other routes, as well as a list of cycle-friendly accommodation providers.

Rural and remote areas to get a helping hand to walk, wheel and cycle more View
Join our 70,000 strong membership and together we can make a better world by bike Join
Cycling UK continues to support the UK to cycle
This remains true during this difficult period with the ongoing threat of coronavirus Covid-19
Read our latest advice on cycling