Muddy roadworks made Steve and Pam Livingston's 2,000km journey across south-west China a challenge but diminish the scenery or their reception.

The ferry from Hong Kong docked at Gaoming on the mainland at 9pm. We – Ken, Ros, Pam, and I – were met by serious men in military uniforms. We were nervous, having heard of Chinese officialdom.

Our passports were scrutinised, our panniers and bikes put through security scanners. We wondered how we would find our hotel, booked in advance in accordance with the visa arrangement, in this strange city in the dark. Then we were shown another side of China, one we were to meet again and again. 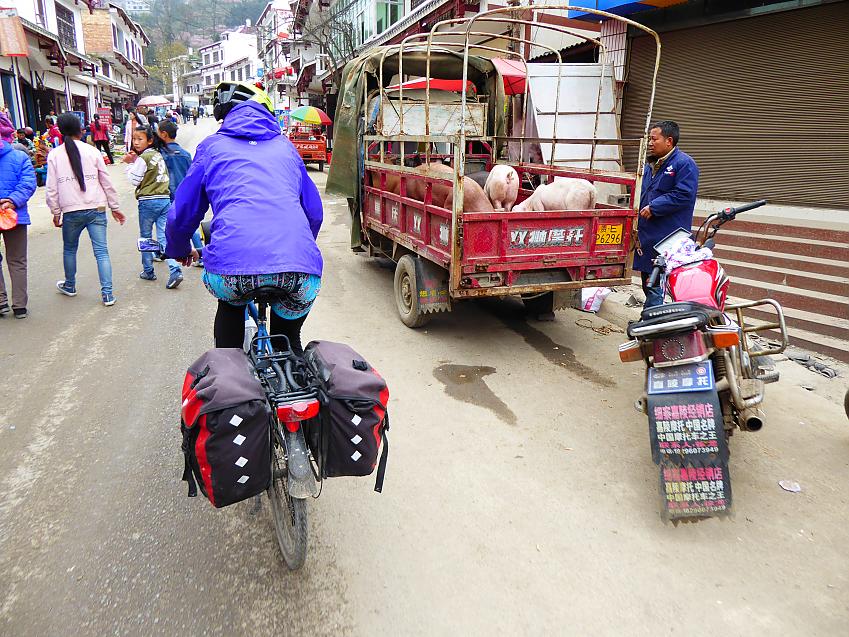 An official beckoned a taxi driver waiting near the entrance, and told him to lead us there. We following the taxi, tagging along like ducklings, as he guided us along the nighttime streets, beneath unreadable Chinese signs. At the hotel, the helpfulness continued. Bicycles shouldn’t be outside, the receptionist gestured; bring them in and lock them up in the lobby.

We had planned a trip of two months, cycling unsupported from Hong Kong to Kunming. We would take the National Highway G321 almost all the way.

For the first few days it followed the Xi River, the second largest in China. Ships on it showed its importance as a transport artery and reminded me of the Rhine. While the road was dual carriageway on this section, it was relatively quiet and we made good speed. 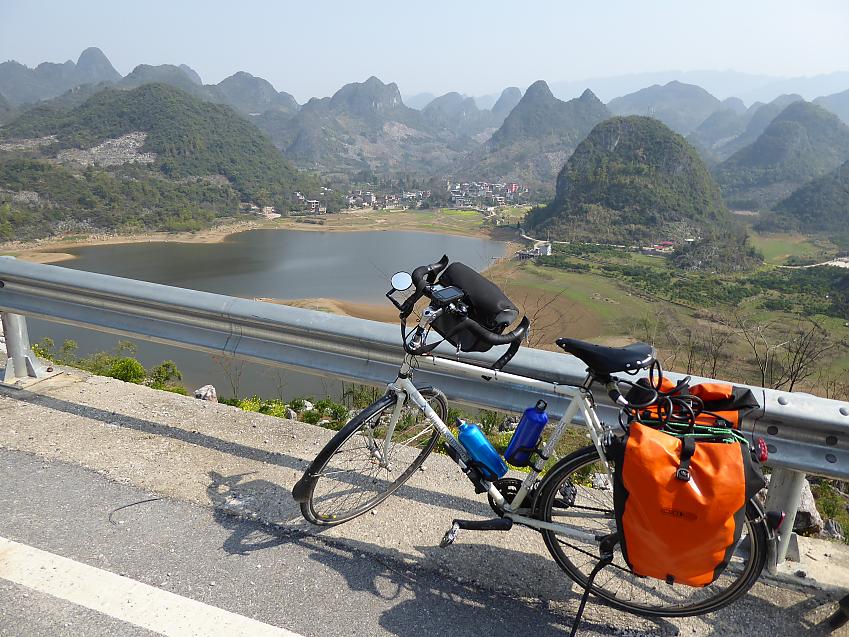 We took a break at the city of Wuzhou, which has the largest collection of snakes in the world. It’s not a zoo but a farm: the snakes are bred for eating.

Walking round the market there, we saw not only live snakes in nets for sale, but also toads, terrapins, turtles and other unusual food animals.

From Wuzhou, we cycled north over the southern reaches of the Nan Ling mountains, climbing gradually through bamboo forest. We crossed the watershed, cruised downhill, and suddenly saw huge pillars of limestone clad in green, except for grey cliffs that were too steep for trees to cling to. 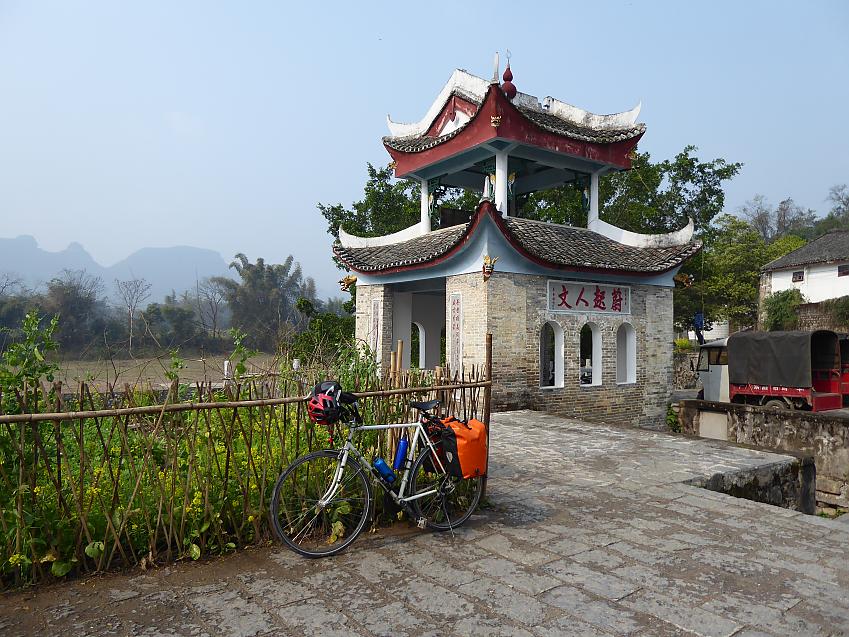 Surely this was the inspiration for scenes from the hit movie Avatar? The pinnacles became straighter and taller as we rode through them, until they surrounded us in every direction – a massive collection of extraordinary summits like giant shark teeth.

We stopped off in Yangshuo and spent a few days there, cycling round on day outings to ogle at the quintessentially Chinese landscape of limestone towers. We saw other Westerners for the first and only time until Kunming.

Then we continued to Guilin, climbing high on a road overlooking the amazing karst scenery.  From Guilin, we headed north then west, joining another big river, the Duliu Jiang.

This flows between the steep mountains of Guizhou Province and offers the easiest way west. A new motorway follows the same valley, generally on stilts, but that was not an option for us. 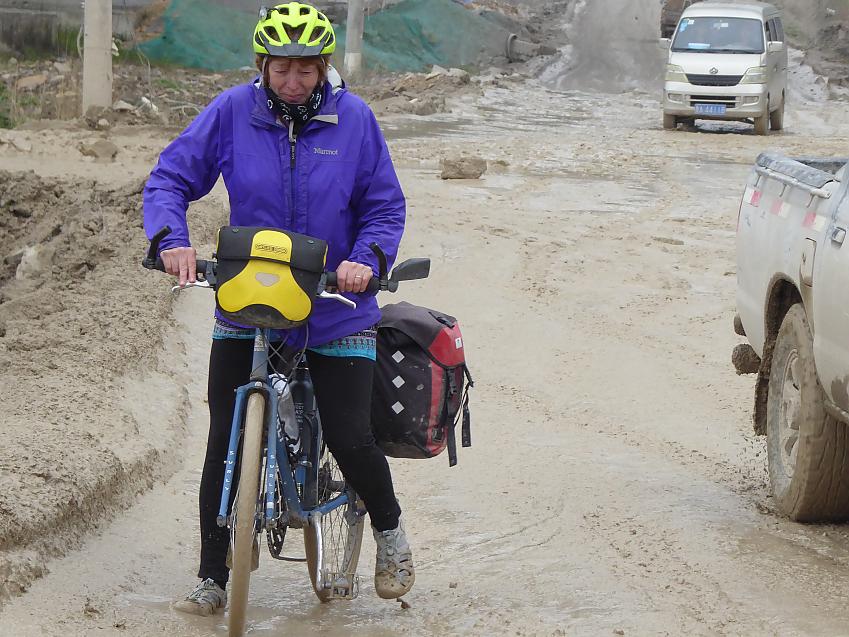 One of the more passable stretches of muddy road

Yet the G321 follows the Duliu almost to its source.  We were away from tourist area now, and the culture changed too. This area is inhabited by the Dong people, and the difference between them and regular Han Chinese folk was most apparent in the women. The Dong women stood out in their brightly coloured, everyday ethnic clothing.

Stuck in the mud

Ken and Ros left us here, continuing by public transport to visit other parts of China. We said our farewells, not only to them but also, it turned out, the tarmac. The authorities had decided that the G321 needed improving.

We spent several days coping with large roadworks, then met our match on the morning we left Rongjiang.  There had been heavy rain during the night and we were riding on a base of mud. To make it worse, limestone dust from the works around us was mixed in and the sloppy mess had the consistency of wet cement.

Pedalling on the flat was like climbing a steep hill. Eventually, the sludge became so deep that we had to get off and push. Our wheels were jammed with filth, and chains and gears were covered with lumps of cement-like gunge.

I knew that no one would speak English but we had to find out if it was possible to get through. With a flash of inspiration, I remembered the little notebook in my handlebar bag. The Chinese don’t use our letters but they do use the same numbers, and we had seen ‘km’ being used on road signs.

I pushed my bike up to a workman and pointed at the sludge and wrote down: 10km? 20km?  He wrote 80km. It was hopeless, but the G321 was the only way through.  Nothing for it but to flag down a lorry. 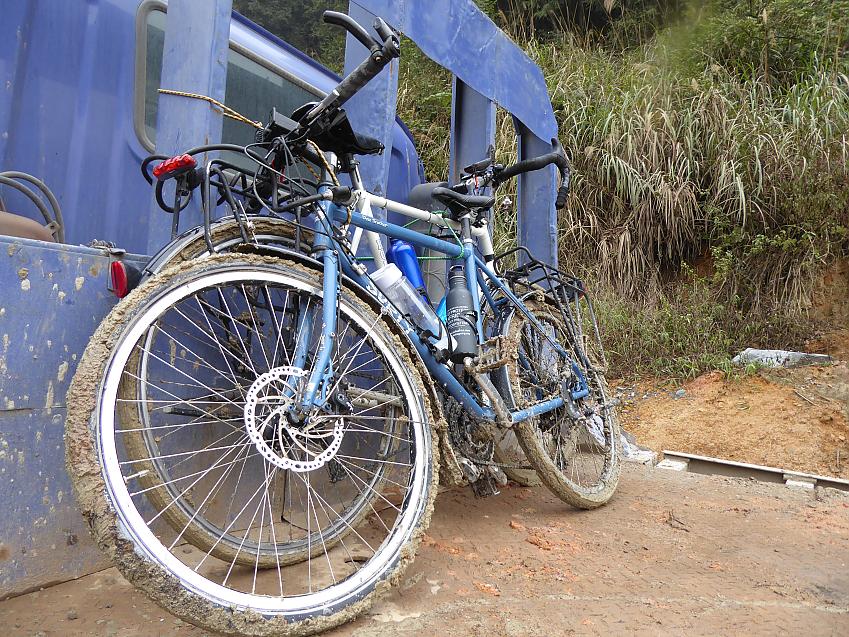 Bikes on a lorry

The first wagon to pass was an empty low loader. The driver looked down at us in the mud with our filthy bikes and immediately grasped the situation. Moments later, we had them strapped behind the cab.

His wagon had four-wheel drive and could cope with the awful conditions. He dropped us off when the surface was firm again, though still unsurfaced. I’d lost a lot of paint from my bike’s top tube where it had rubbed on the lorry as it lurched along, but otherwise the bikes were rideable. The driver wouldn’t take any money for his trouble. We had to become accustomed to conditions like that on the road.

The mudguards came off, otherwise the wheels became jammed. Fortunately, after the lorry incident, these conditions lasted for less than ten kilometres at a time, so we were able to push through. 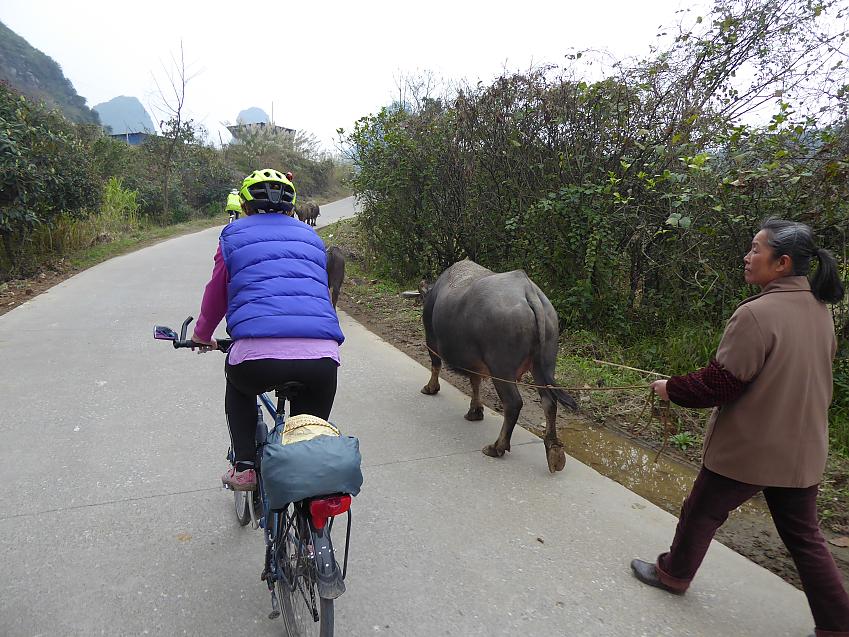 We generally found a hotel in every town along our way. One afternoon, however, we were in a mountainous area and our best guess from the GPS was that the nearest town was about 40km away, with big climbs in between.

Seeing three men working on a drain, I went over to them and produced a sheet of paper that we’d prepared with useful phrases in Mandarin, courtesy of Google Translate, before we left home. I pointed to the relevant line and hoped that it was correct: ‘Is there anywhere near here we can stay tonight?’ They looked at the Chinese symbols. Another man walked up. He looked at the sheet and gestured that we follow him.

He mounted a small motor bike and set off. Fortunately, the road went downhill, for about 2,000 feet, so we kept up with him, all the way down to a small town in the valley. He stopped outside a frugal-looking building.

Odd looking hotel, I thought, as I followed him in. There was a doctor behind a desk, talking to a younger man in a white coat. I was beckoned in and offered a chair. The doctor listened to our guide, then turned to me with the interested look reserved for a new patient. 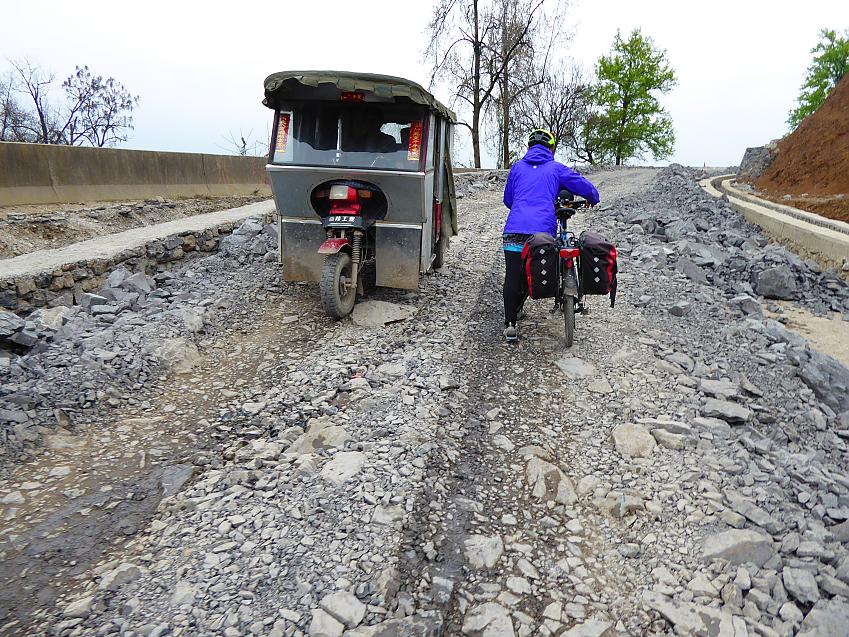 A rocky approach to Pu'an

It was bizarre. I pulled out my paper again and showed it. The doctor took it and scanned it up and down. He spoke no English but understanding dawned, and he started to laugh and spoke to our guide, who looked sheepish.

He gestured that we followed him, and got into his car. We rode behind, through the busy market street, until he stopped at a house and spoke to the owner. We were taken to a bedroom and we realised, as the doctor left, that we had accommodation.

The situation resolved itself later when I looked at the help sheet again.  Underneath the line I’d shown earlier, asking for accommodation, it said: ‘My partner is very ill. Where can we find a doctor/hospital?’

We made it to Kunming eventually. Throughout the trip, China never ceased to amaze us.

We covered 2,180 kilometres in six weeks’ cycling, then travelled back in nine hours on a high-speed train at 300kph. We picked up our bikes, which had travelled by freight train, in Shenzhen, just north of Hong Kong.

You need a visa for mainland China. We were able to obtain ones valid for three months. On application, you will be required to produce an itinerary, so we booked five hotels on our route, which was acceptable. We cancelled or rearranged these as we travelled. Chinese hotels are generally good quality and very cheap – usually about £10-20 for a double room. They always have internet. If you are cycling independently, it is essential to be able to recognise the Chinese characters for ‘hotel’ – they often don’t look like hotels from the outside! If you get stuck, there will be always someone who will put themselves out to help you. 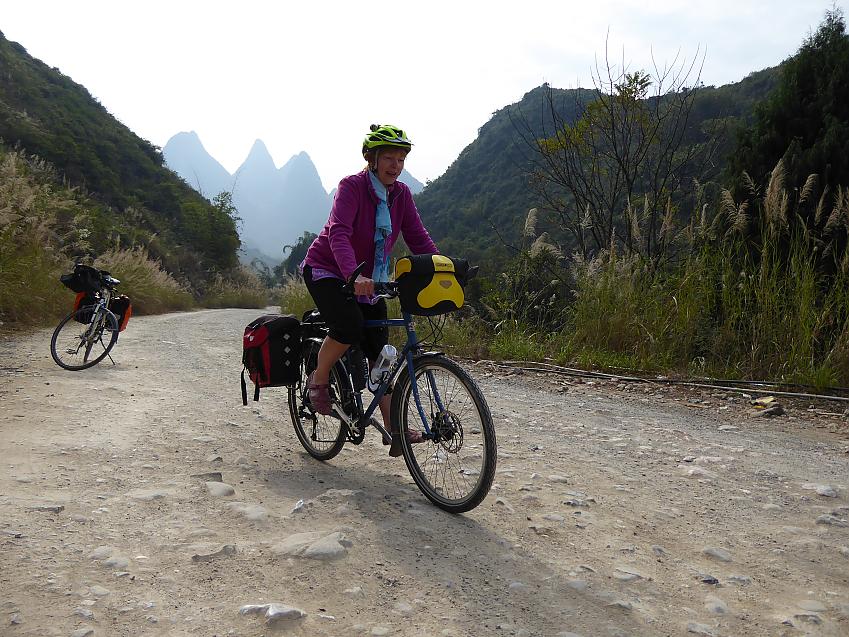 Not all roads are created equal

Route: We took a ferry for five hours from Hong Kong to Gaoming. From there we cycled on the G321 to Guilin, then Guiyang. From here we used the G320 to Kunming.

Conditions: We travelled from early February to early April. The weather was unusually warm initially, then cold and wet. Road surfaces varied from excellent tarmac on finished sections to appalling mud on sections where the road had been removed prior to rebuilding. (It should be complete now.)

I'm glad I had… A Garmin Oregon GPS, though the marker was always skewed about 500m NW. Chinese roads in cities are generally well signed in both Chinese characters and Pidgin. We could usually identify a main road on the screen and work out our route through the town from there.

Next time I would… Download a simple version of Google Translate onto my mobile phone, because no one spoke English.