Dartmoor: just the name is enough to conjure up images of mist-shrouded tors, bleak moorland and stories filled with pixies, ghosts and highwaymen. Dartmoor National Park is often thought of as the last true wilderness in Southern England – its open expanse of moors is punctuated by huge granite edifices, steep valleys and ancient woodland – yet look closely and you will see signs of human habitation and land use spanning thousands of years.

It is a ritual landscape and is heavily steeped in history. Wild camping is permitted across much of Dartmoor, making it a haven for backpackers and bikepackers. It is also the stomping ground for fictional Sherlock Holmes, hot on the trail of a spectral hound. Considering its size, Dartmoor has relatively few rideable bridleways, but they are seriously good. You might just find yourself chasing more than tyre marks though. 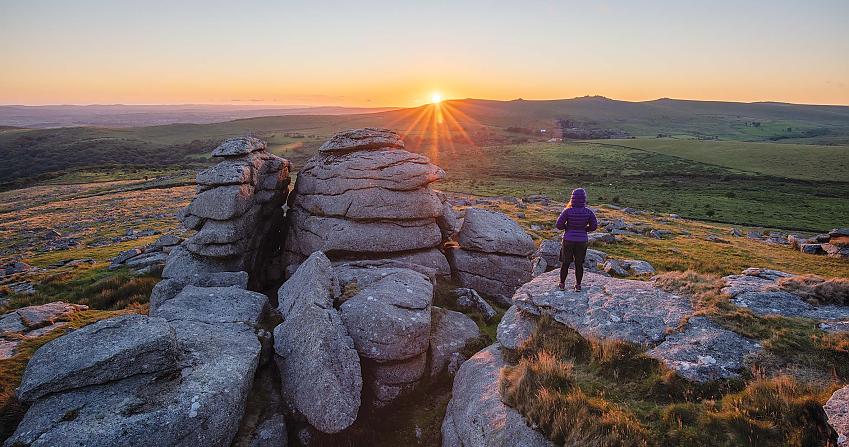 This circular route plots a sweeping course around the national park, linking brilliant uncrowded trails with the best of Dartmoor’s historical sites. Ride past the prehistoric settlement of Grimspound, explore Merrivale’s vast ceremonial complex and paddle in the shallows under Bellever’s clapper bridge. Trail highlights, meanwhile, include the panoramic Hunter’s Path underneath Castle Drogo, the granite-strewn singletrack around Sheeps Tor and the mossy woodland descent down to Daveytown.

The bridleways here can get steep and technical with testing rock gardens like those around Manaton, but there is plenty of relaxed riding to be had too on the Granite Way, along the old Princetown railway and along the banks of the River Teign. This route is best tackled over a long weekend, allowing you to take it at your own pace and properly explore the ancient landscape.

Pore over a map of Dartmoor, and a clear pattern emerges. A series of rivers radiates out from its high moorland interior, forming watery trails across the national park: the Okement, Bovey, Dart, Avon, Taw and Teign emerge from boggy ground and wind across the moor, gathering speed in clear streams before becoming fierce torrents through gorges damp with mist and dark with moss.

Okehampton sits at the confluence of two of these waterways: the West and East Okement rivers. Here on the national park’s fringes they merge before settling on a meandering course north to Bideford and the sea.

Like a Dartmoor river in reverse, this bikepacking route springs from Okehampton and skirts the western edges of the moor on the Granite Way – part of National Cycle Network’s ‘Devon Coast to Coast’ route – before turning inwards. The route crosses almost 50 metres above the West Okement River on the Meldon Viaduct, which was built in 1874, and then soon after leaves the cycleway to climb on close-cropped grass under Sourton Tors.

On the summit, echoed on countless other tors, is a jumble of granite rocks flecked with colour: the large milky crystals of feldspar, the clear gloss of quartz and the dark flakes of biotite. From here, the descent barrels through high bracken before looping round to re-join the Granite Way towards Lydford Gorge. 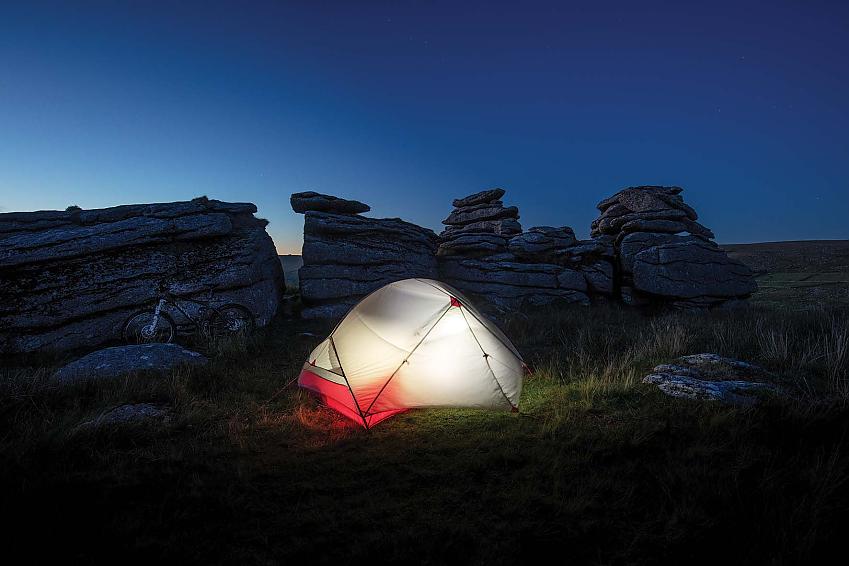 Once past Gibbet Hill, the trail turns east at last towards Dartmoor’s empty centre. There is no doubt when the moor proper has been reached. As William Atkins wrote in The Moor: Lives Landscape Literature, this certainty is felt ‘like a cold breath on the nape ...

The place is at once underfoot and on the horizon’. From the shoulder of Cox Tor, riders are confronted with a vast expanse of moorland. Even in bright sunshine it can be a foreboding place. No trees. No shelter.  No signs of habitation except for the radio mast on North Hessary Tor. An indistinct bridleway picks its way through the moorland clitter before the start of a great little descent down to Merrivale Quarry and the road.

If you have time, a quick detour to Merrivale’s ceremonial complex – only a five-minute climb up the tarmac – is well worth the effort. The moorland is covered in prehistoric remains that you can walk right up to, including Bronze Age stone circles, stone rows, burial cairns, hut circles and enormous standing stones.

From open moorland, the route then heads into dense woodland. The path to Daveytown is a secret gem of a descent, which tunnels down through stunted oaks. Concrete doubletrack changes into a carpet of mossy grass with just a sliver of earth showing through. Towards the bottom a series of polished slabs lead to a gate, and on the right a stone wall runs alongside, almost lost under moss and ferns. 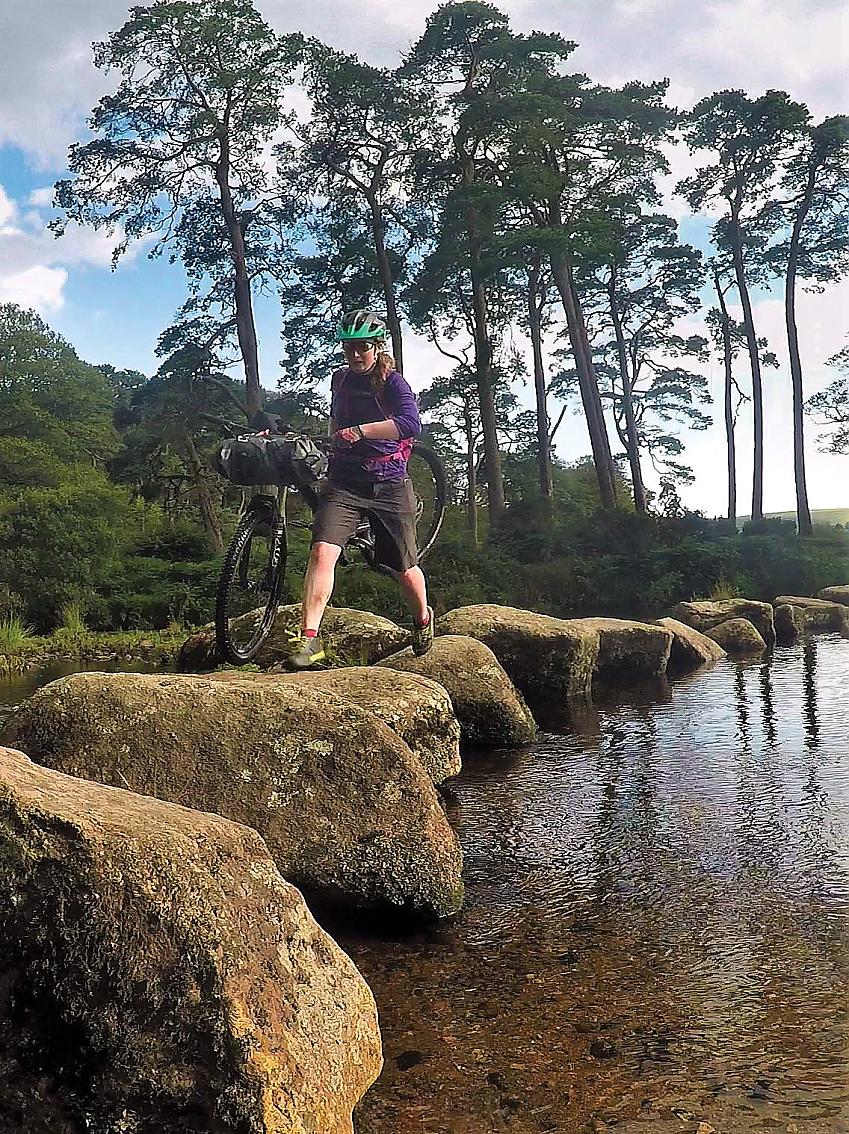 Once the route climbs back out of the Walkham Valley, it joins the disused railway that forms part of Dartmoor National Park’s ‘Granite and Gears’ off-road rides. The main route takes the line south to Burrator Reservoir but there is an option to follow the railway line back north. This option can be used either as a shortcut over to Princetown or as a way to explore the flooded ruins of Foggintor Quarry.

For over 100 years, the quarry, along with the extensive quarry works at Merrivale and Haytor, provided the stone for a number of famous landmarks such as London Bridge and Nelson’s Column.

After Burrator Reservoir, the route turns towards Dartmoor’s interior once more on an exposed moorland section. It follows the path of the old monastic Maltern Way over the wonderfully named Gutter Tor, Ditsworthy Warren and Drizzle Common before passing Nun’s Cross, one of the largest and oldest of Dartmoor’s granite wayside markers.

Princetown is a good place to regroup before heading out once more. Near Sherberton Farm, the stepping stones across the West Dart River present yet another novel obstacle. Twenty smooth boulders sit squat in the water, forming an arc against the current. It makes a unique and entertaining hike-a-bike, but the crossing is bookended by sections of unrideable trail and there is a shorter set of stepping stones to cross earlier too. 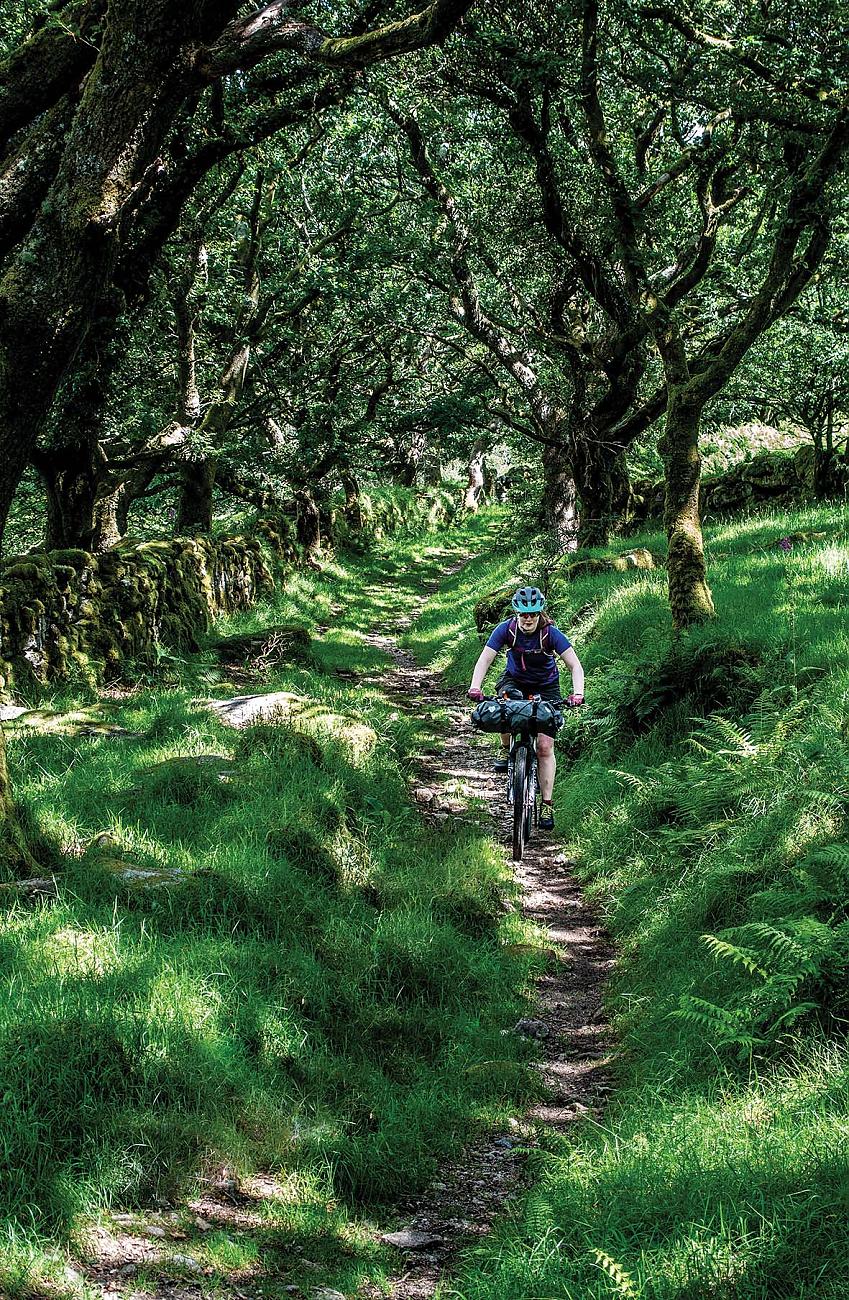 Consider taking the road instead if the water levels are high. Further east, past Bellever Forest and Postbridge’s welcoming pub, is the prehistoric settlement of Grimspound. The huge boundary wall – about 150 metres in diameter – spans the gap between Hookney Tor and Hameldown Tor and inside are the remains of 24 stone roundhouses. It is a smooth, flatout descent to Jay’s Grave and Hound Tor, which marks the beginning of a different sort of riding.

From here, the open moorland with its empty horizons is left behind and the focus inevitably narrows – everything is nearer. Sharper. More detailed. Down by Becka Brook, the moss-laden rocks cover the trail like balls of green fur. Hazelnut husks crack and pop under tyre on the quiet lanes towards Manaton. The red gingham of an umbrella peeks over the School House wall, slabs of homemade cake yours for a pound.

Distances feel compressed: Foxworthy, North Bovey, Moretonhampstead, Mardon Down. Each pass by in quick succession before an exhilarating series of paths drops down to the River Teign. Ten kilometres of relaxed riding slip by in quiet, dappled woodland, following the banks of the river all the way to Fingle Bridge. High above, a narrow flowing trail contours above the tree line on the Hunter’s Path – look out for buzzards and kestrels hovering nearby.

It’s a short, sharp push to reach the path but it then stays high, traversing Piddledown Common and then passing under the walls of Castle Drogo, the last castle to be built in England, before returning to Okehampton. 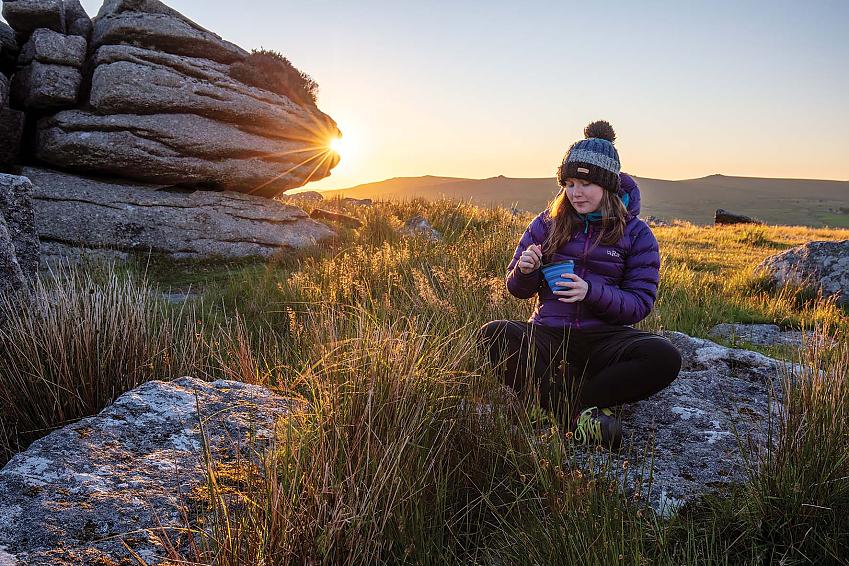 The majority of the bridleways are straightforward to locate, but some cross large expanses of open moorland and can become indistinct in places, such as those from Higher Godsworthy to Merrivale and from Princetown to Hexworthy. Also, the bridleway marked on the OS map over Hound Tor does not correspond with the trail on the ground.

Most trails on this route are stonebased and the route avoids the boggy bridleways over the tops of the more remote tors. However, a number of climbs and descents are on close-cropped grass, which acts as a sponge after heavy rain.

The Ministry of Defence has live-firing areas on Dartmoor – while the route does not go inside any of these areas, it does pass close by at Merrivale. Make sure to use the alternative permissive path (clearly signed) at Higher Godsworthy Farm. Also, there is a cycleway next to the short stretch on the B3260 outside Okehampton.

There are plenty of accessible rivers to fill up from en route, and a good number of pubs too.

The 160-kilometre Devon Coast to Coast is a linear route linking Ilfracombe and Plymouth. It is mostly on traffic-free trails and joins up the Tarka Trail, the Granite Way and Drake’s Trail.

At the time of writing, you can purchase Bikepacking England direct from Vertebrate publishing for £16, or get the paperback on Amazon, or Blackwell's. 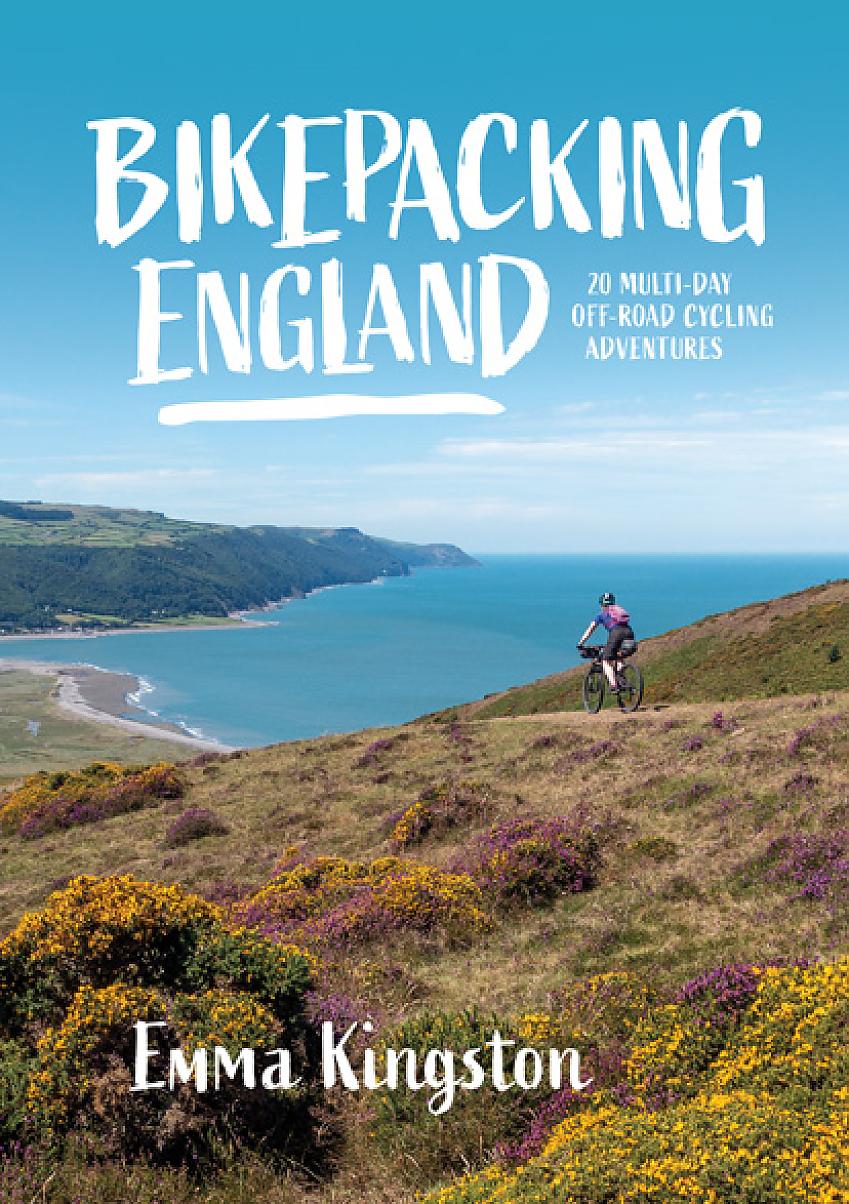 What's in your tool bag on tour? View